Action! McLaren at the movies

McLaren’s Formula 1 debut in the 1966 Monaco Grand Prix is probably better documented than almost any other race in the ’60s.

Why? Because the first race of the ’66 season featured heavily in the memorable opening credits to Hollywood director John Frankenheimer’s movie Grand Prix – a film that weaved a fictitious subplot around the actual on-track events of the world championship.

What makes Frankenheimer’s Grand Prix a cut above the average racing movie is the effortless blurring of the boundaries between that which is real and that which is not. The racing sequences in the film are a mix of genuine F1 footage and set-pieces shot in and around the race weekends, on the real track, actors alongside F1 drivers, with a Formula 1 world champion driving the camera car. 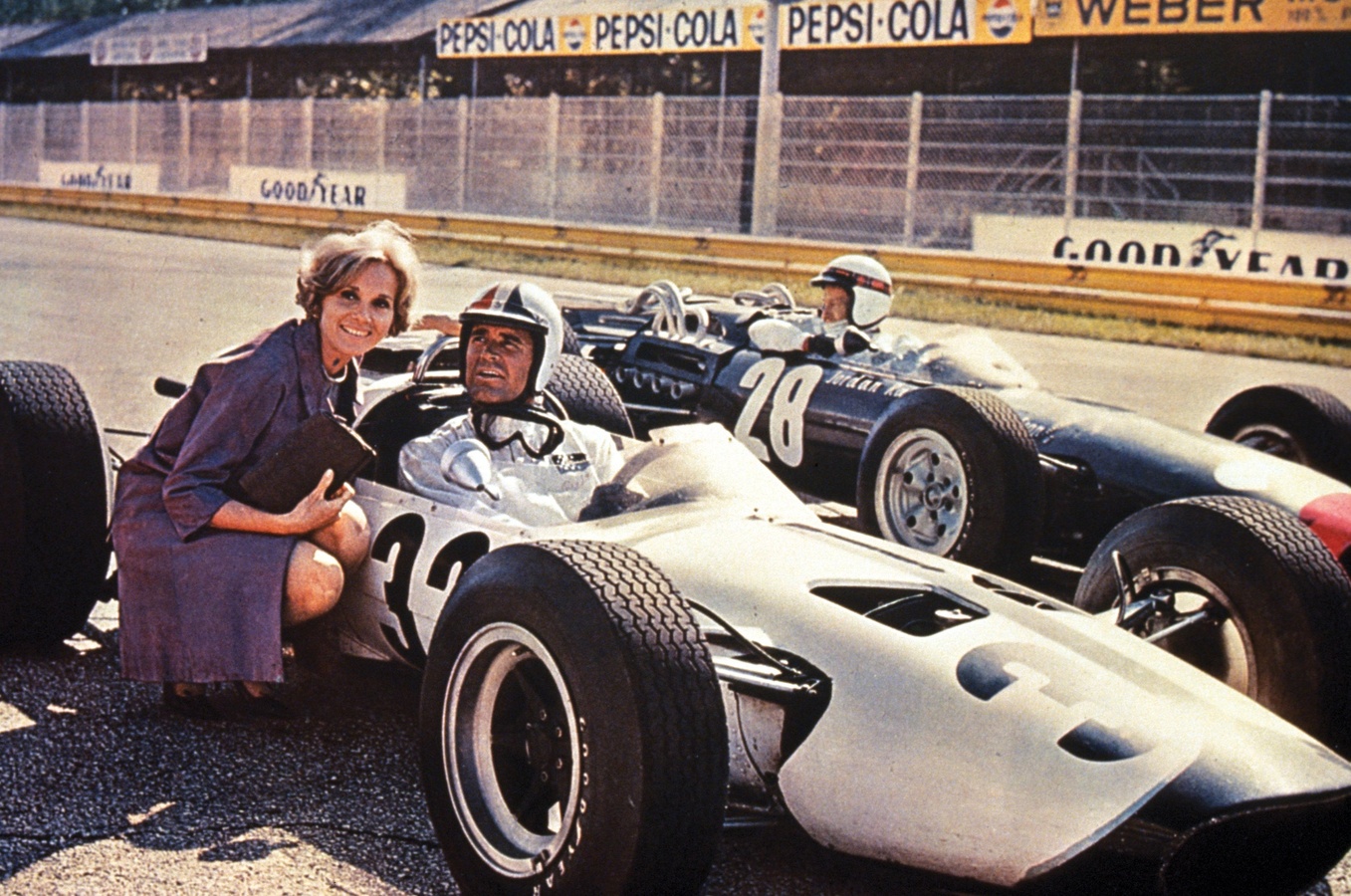 Frankenheimer’s artistic licence also helps to explain why McLaren’s first Formula 1 car appeared in white and green – a livery not usually associated with the marque.

Ordinarily, a McLaren should have raced in the national colours of New Zealand which, in racing terms, were green, black and silver. It didn’t, partly because nothing in the rules said it had to, but also so that the M2B could double for the fictional Japanese manufacturer Yamura in Frankenheimer’s movie.

It was ground-breaking stuff. For the audience at home, used to seeing F1 as grainy, largely black and white news footage, the crisp colour photography of Grand Prix, the pitlane details, the smoke from exhausts and the long lens widescreen panoramics of the F1 season delivered a realism to motor racing that wasn’t matched in actual coverage until the 21st Century. It’s thanks to Grand Prix, rather than the broadcast footage of the day, that so much of McLaren’s first season can be seen. 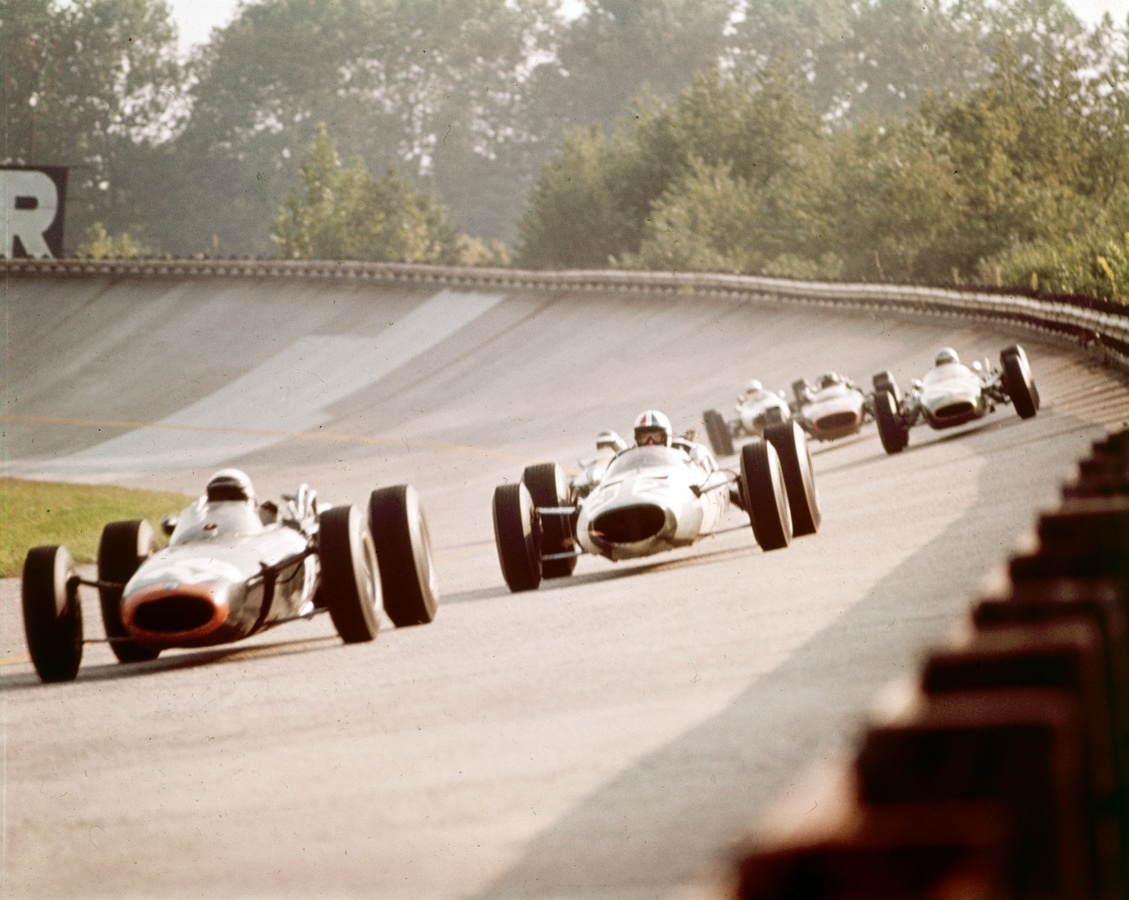 The streets of Monte-Carlo provide the perfect example. Our story and Frankenheimer’s both start in the Principality, the first race of the season. The records show Bruce McLaren starting P10 and retiring after nine laps with an oil leak. Frankenheimer’s helicopter shots, however, provide lots more detail: they show that Bruce gets a rocket start. He takes the inside line at Ste Devote and hammers up Beau Rivage in the mix with Jochen Rindt, Jack Brabham, Denny Hulme, before merging into line on the approach to Massanet. The action then switches to a ground-based camera looking back across Casino Square, showing Bruce coming through in P6, then getting sideways at Bas Mirabeau, flinging the car through the kink that would later be replaced by the modern Nouvelle Chicane. It’s action that you simply can’t see anywhere else.

Garner’s Pete Aron doesn’t drive the Yamura at the start of the season, thus Bruce and the M2B are doubling for the equally fictional ‘Tim Randolph’. Randolph was played by 1961 World Champion Phil Hill. Hill’s primary task on Grand Prix was as a racing advisor (along with Jo Bonnier and Richie Ginther) and driver of the stripped-down Ford GT40 sportscar used as a camera car. He was mostly retired from F1 by 1966, though he was entered by Eagle for the Italian Grand Prix – thus, in one of the many continuity conundrums in the film, Bruce is doubling for one of his peers.

The intercuts between the genuine footage and the filmed sequences are helped by the fact that everything is on the same film stock, and shot on the same weekends. Frankenheimer used Formula 3 cars with added bodywork to replicate the F1 cars, and filmed sequences around the practice sessions and on the days following the race, with an ensemble of F1 drivers and his actors at the wheel. 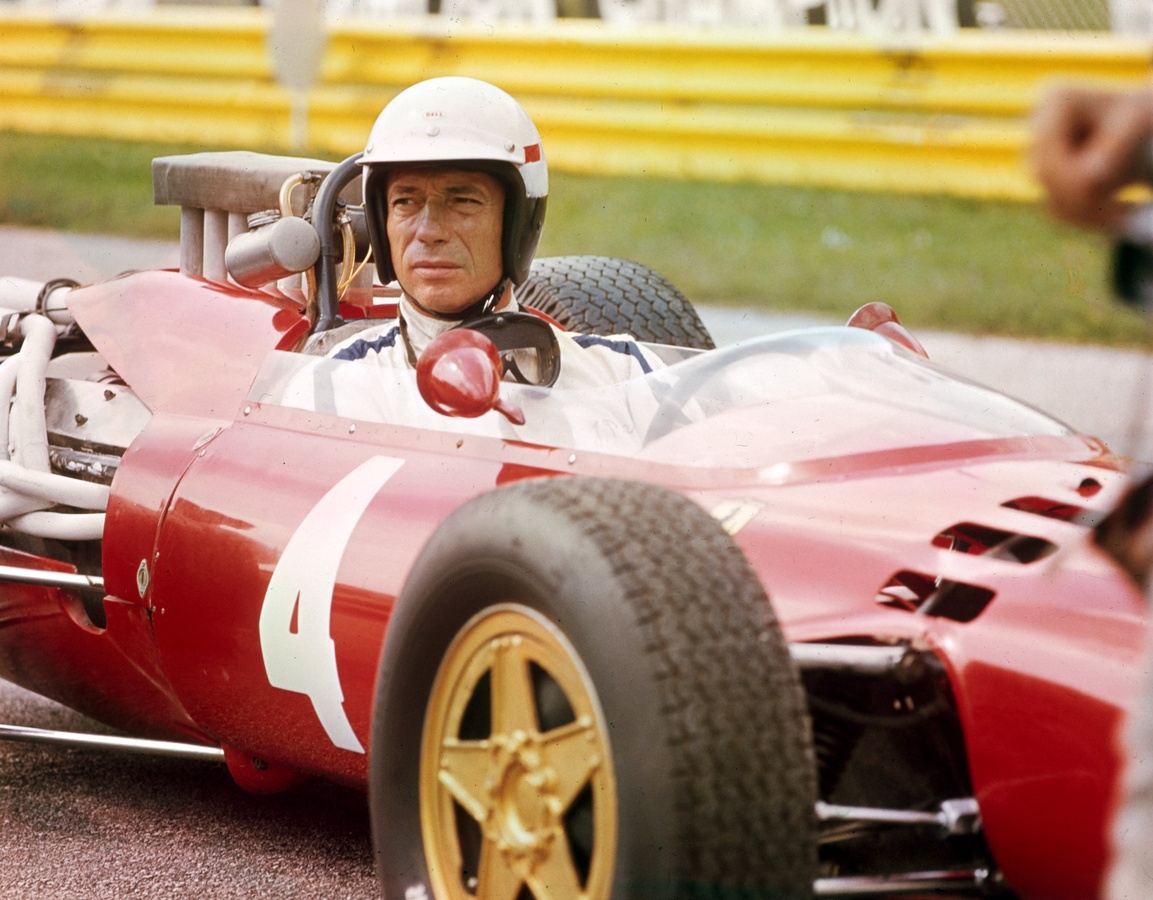 For the action sequences, the drivers and the cast would assemble and film on a section of each race track, completing a few corners in front of the cameras. Natural competitive instincts and high spirits were a problem: after a take the drivers would race back to the start for another take. More than one accident happened this way, with Jo Siffert notably managing to rip three wheels of his F3 car in the competition to get back to original positions first!

This was really quite daunting for the actors, who, before spending six months following the F1 season, learnt the rudiments at the Jim Russell Racing School. Garner, however, had two months’ tutelage from Bob Bondurant, which ignited a life-long love of racing. “By the time I got to Europe I could drive, though I wasn’t very accomplished,” recalled Garner, speaking to us shortly before the (belated) DVD release of the movie. “Being out on the track – at some magnificent circuits, with the best drivers in the world – really tested the nerves.” 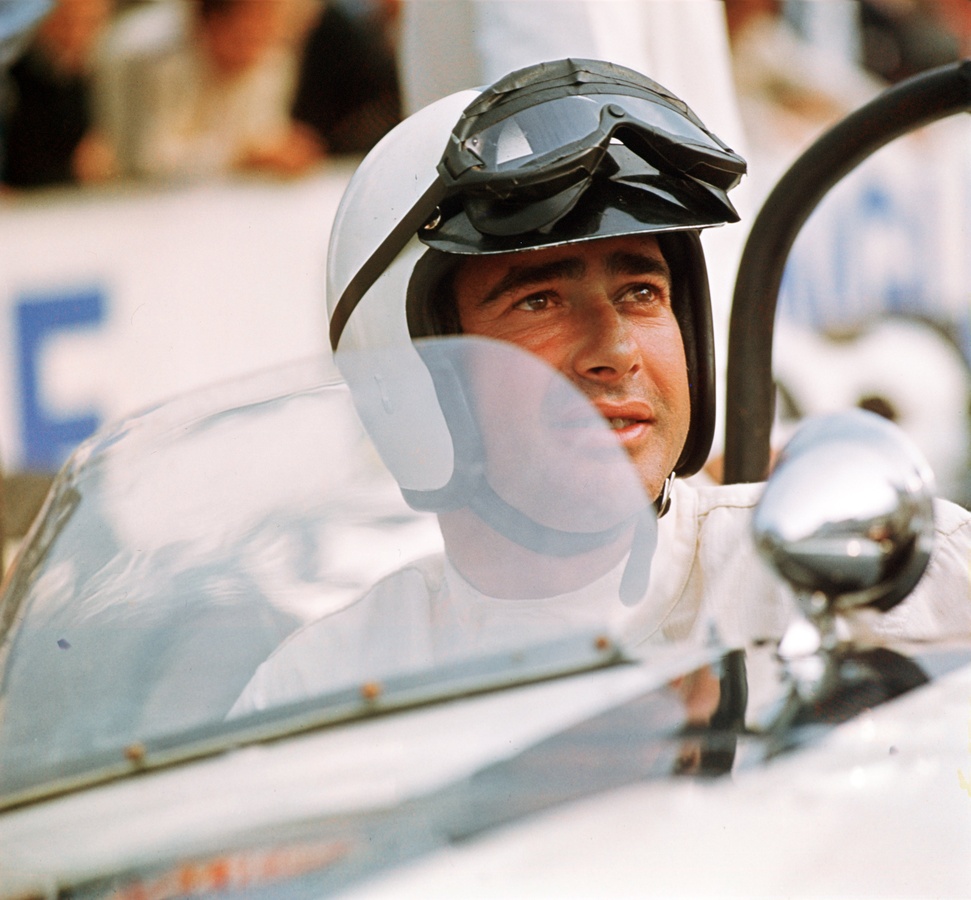 The movie didn’t pull its punches. For anyone unfamiliar with motor racing in the ’60s, the risks and phlegmatic approach to death and serious injury might seem overly-dramatic. To racing fans, however, it doesn’t. BRM driver John Taylor was killed at the Nürburgring during the 1966 season, while at Spa Jackie Stewart had the accident that left him with a broken collarbone, dislocated shoulder, cracked ribs and a lifelong desire to improve safety in the sport. If there was any resistance from the driving community to the idea of turning their dangerous vocation into entertainment, it didn’t filter through to the cast and crew of Grand Prix. “I certainly never heard anyone say anything bad about the script, and no-one was hanging their heads when we discussed it, I guess they just accepted the situation,” said Garner.

Even the actors weren’t immune to the risks: Lloyds of London threatened to cancel Garner’s insurance after the actor was spotted driving through Blanchimont at 130mph during a characteristic Spa-Francorchamps cloudburst (the wet sequences at Spa, both genuine and arranged, show the old circuit at its most fearsome – but also its most compelling). “Yes, Spa could be scary in the rain but it’s the best circuit in the world and you wouldn’t want to give it anything but your best,” recollected Garner. Grand Prix has Aron recording Yamura’s first victory at Spa – which dovetails neatly with history: McLaren – or rather Bruce McLaren Motor Racing – to give the team its original title, also took a first championship victory at Spa – though that had to wait until 1968, with Bruce driving the Cosworth DFV-powered orange M7A.

Garner’s clashes with his insurers didn’t end at Spa. They made good on their threat following a fire sequence filmed at Brands Hatch that got out of hand. The shot was filmed as scripted, with Garner taking the chequered flag then pulling off the circuit before Paddock Hill Bend with flames – supplied by butane canisters – bursting from the rear of the car. The rapidity with which Garner exits the cockpit, bruising himself badly and limping for several weeks as a result, was less a result of immersion in the method and more the case of the car genuinely brewing-up. “The fire got a lot bigger than I was expecting,” he said. “It wasn’t a very comfortable moment and I got out of the car in a real hurry.” 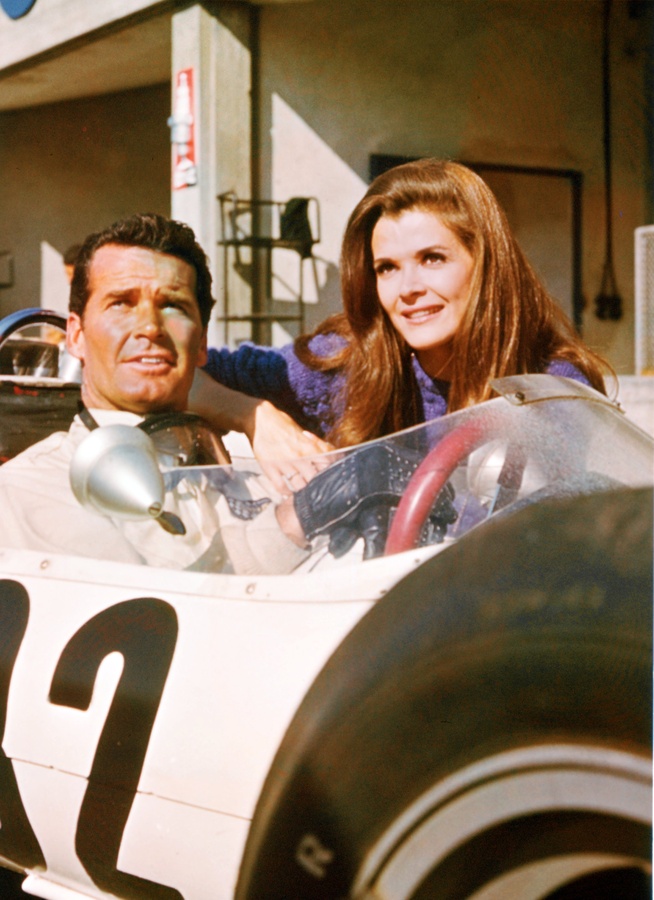 Garner wasn’t to be stopped and completed the last two months of filming uninsured. After Grand Prix he went into team ownership with a share of US sports car outfit American International Racers. He also drove the pace car at the Indianapolis 500 in 1975, 1977 and 1985 and was a regular spectator when the US Grand Prix relocated to Indy.

The film he helped Frankenheimer create remains a wonderful snapshot of the 1966 season and, fifty years on, quite the best way to see McLaren’s F1 debut. It shows the cars as they really were and captures some of the sheer speed and noise of Formula One at the beginning of its golden age: it remembers to look wider than the track, capturing the excitement of the crowd. It presents wonderful, rich images of racing circuits: Monaco, Spa and Monza much-altered but all the same instantly recognisable to TV fans of modern F1; Charade, Zandvoort and Brands Hatch a blast from the past.

There’s never a bad time to watch Grand Prix – but our 50th anniversary is certainly one of the best.

The intention in Grand Prix was to have the brand-new McLaren M2B doubling for the Japanese Yamura chassis, with Chris Amon doubling for Aron. With that in mind, Garner’s helmet was modelled on that of Amon (minus the stylised Kiwi). 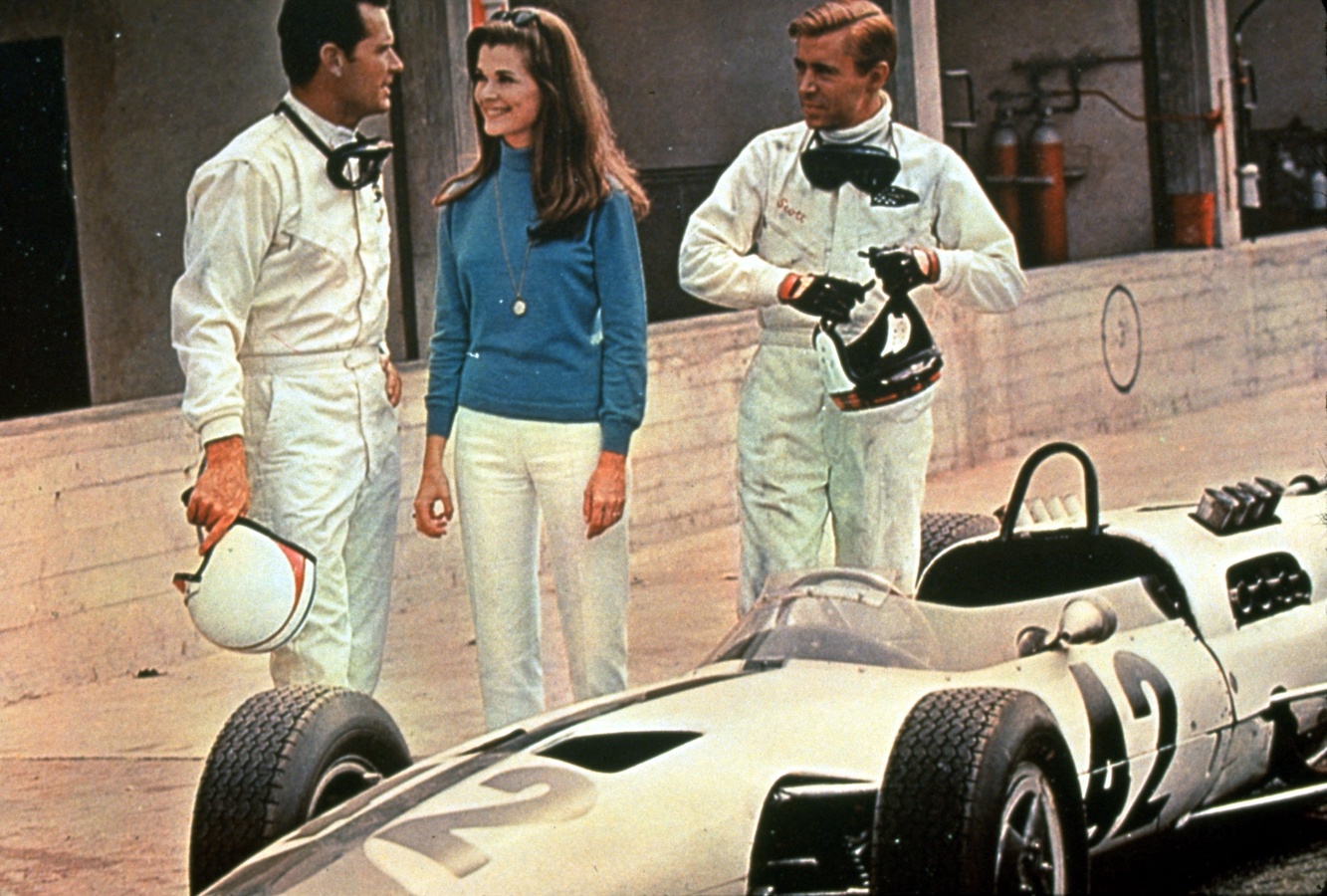 Problematically, the second M2B – intended for Amon – never materialised in 1966 due to a host of technical and logistics issues, not least of which was the (un)availability of engines. Amon, therefore, competed for McLaren in the CanAm championship, driving the M1B, while taking occasional F1 drives with Cooper.

Another issue for Frankenheimer was that the very new McLaren team didn’t appear at every round, skipping the French, German and Italian Grands Prix. Bruce also failed to take the start in Spa, following a wheel-bearing failure in practice. The film largely ignores the German Grand Prix for contractual reasons (a rival John Sturges/Steve McQueen project, ultimately unmade, had the rights to Nürburgring footage).

The get-out for France was scripted: the real 1966 calendar had the Belgian Grand Prix at Spa before the French Grand Prix at Reims. Frankenheimer switches them around, thus the race missed by Aron becomes the grand prix at which the M2B was not present. He also moves the race from Reims to Clermont-Ferrand (Charade), home of the 1965 French Grand Prix, filming on a closed circuit with around 3,000 extras rather than an open road. 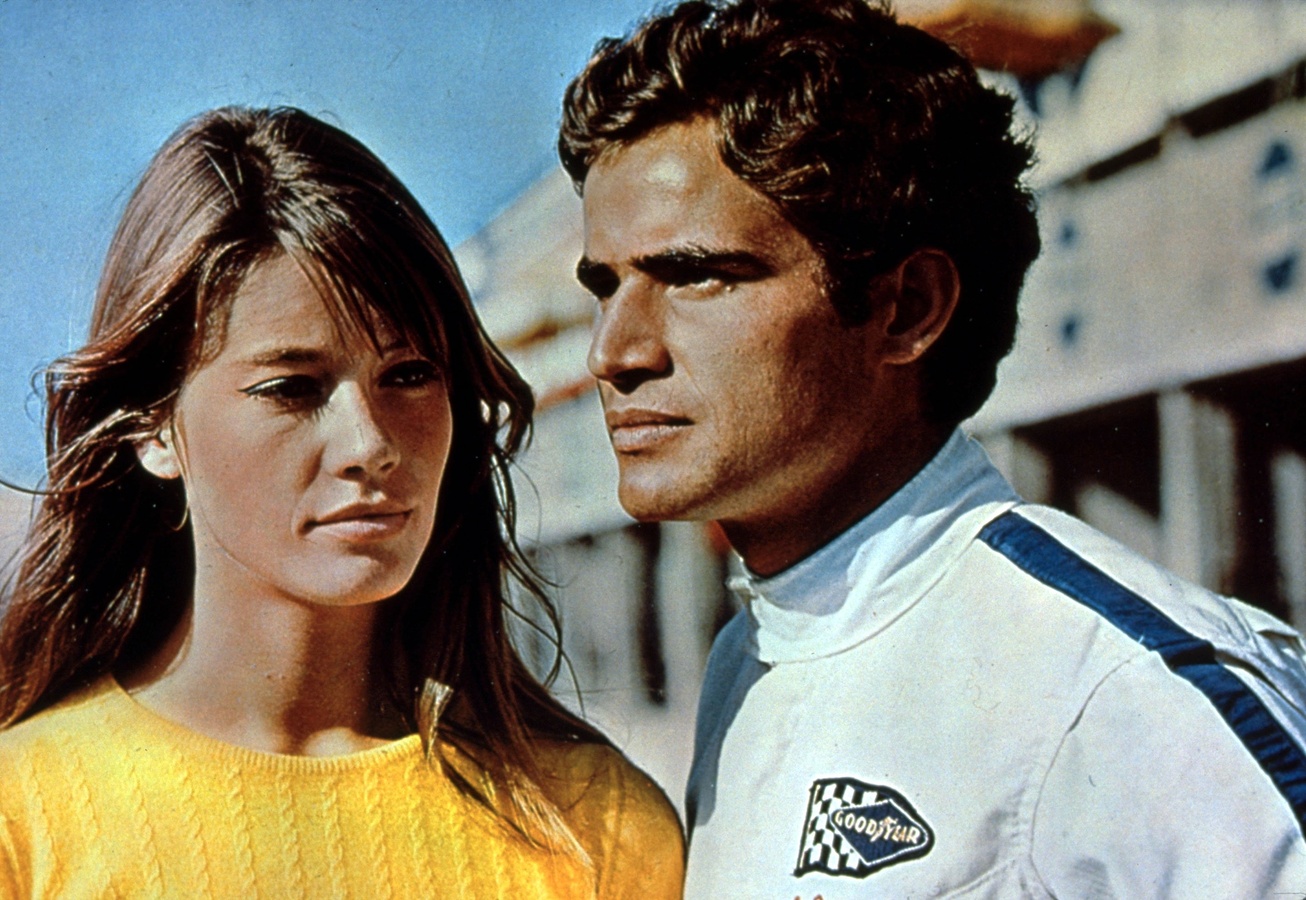 The weather at Spa was sufficiently poor for it be be virtually impossible to recognise any car, and for the finale at Monza, Frankenheimer uses less genuine race footage and rather more set-up shots. He was also, as the season wore on, able to cajole other teams to adopt the required paint scheme. It isn’t perfect but it is helped by the fact that 1966 was the first year of the 3-litre formula, and so changing car designs were common. The ultra-keen can spot the incongruities – but, equally, are also more likely to understand the practical constraints of the time.

The chaotic nature of F1 in 1966 throws up lots of other small continuity headaches: Yves Montand, playing Ferrari driver Jean-Pierre Sarti, begins the season with a white helmet featuring a blue stripe, similar to that worn by John Surtees – but Surtees quit Ferrari two races into the season. Thus, later in the film Montand switches to a white helmet with red flashes, similar to that of Mike Parkes. Brian Bedford, playing Scott Stoddard, sports Jackie Stewart’s famous tartan-ringed helmet, while Antonio Sabàto as Nino Barlini has a silver helmet similar to Lorenzo Bandini. It’s been remarked that the names are sufficiently similar – Aron/Amon, Sarti/Surtees, Stoddard/Stewart, Barlini/Bandini – to be mistaken from a distance.

Added realism comes from the number of real drivers appearing as themselves. Alongside Phil Hill, Graham Hill also gets a character name, Bob Turner, as Stoddard’s team-mate, with the rest of the field, essentially playing themselves. Bruce McLaren is gravelly and laconic with his lines; Richie Ginther strident, Jochen Rindt is very precise – but also attempts to slyly trip Graham Hill in a moment that doesn’t appear scripted. Even the great Juan Manuel Fangio makes a cameo appearance… 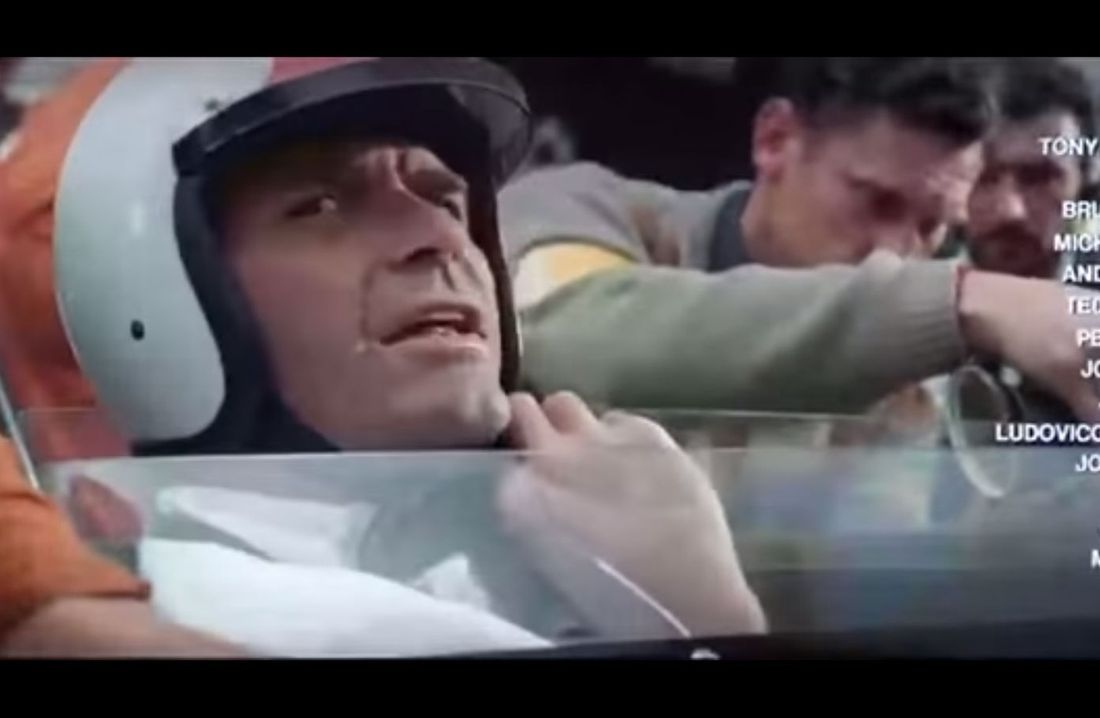 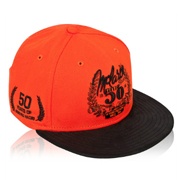 The road to McLaren's F1 debut