New technical regs, a cost-cap and covid-19 mean building the MCL36 is not business as usual

New technical regs, a cost-cap and covid-19 mean building the MCL36 is not business as usual

Where does an F1 team find performance? Ask ten different people and you’ll get ten different answers – but it’s unlikely any of those answers are going to include the word ‘manufacturing’. And they should. It’s normal to talk about great drivers, the sweat and toil of mechanics, hard work from engine manufacturers, big brains of chassis designers, aerodynamicists and so forth… but the actual manufacture of parts rarely makes the long list. The reality is quite different.

The phrase we’re not allowed to use around the manufacturing shops or production engineering department is ‘off-season’. There’s no such thing, and traditionally, while the race team may be able to take a few weeks’ well-deserved rest over the winter, this is when the manufacturing effort reaches peak load, flat-out delivering parts to pass the FIA’s homologation tests, construct a launch car, prepare for winter testing and have upgrades (and spares) ready to go at the first race. The clock is most definitely ticking.

And this season is perhaps more time-critical than most. We have a sweeping set of new technical regulations, a cost cap that’s starting to make itself felt and the continuing impact of working in a world mindful of covid restrictions. It makes the MCL36 quite possibly the most demanding car build in our history… but the team does enjoy a challenge, and Operations Director, Piers Thynne is here to talk us through quite how large a challenge it is.

Piers, you've often commented that January and February are really the toughest months for those in the production team. This year, given the regulation changes, is perhaps even tougher than usual. How's everyone faring as they ready the MCL36 for its unveiling? Is there much there left to do?

January and February are super busy – but you really see people at their best when they’re working to a fixed deadline, under pressure to perform. What we see across the MTC is fantastic teamwork, good communication and good collaboration. That unlocks the complexity of the task that we’re working through, which is to deliver a wholly new car to a wholly new set of regulations.

I think the numbers tell a story. The bill of materials is similar to what we have in any other year (same total number of parts, same amount of tooling), but this year, when compared to those previous years, we’re running hotter, with a little over 20% more work in progress across the factory and our supply chain. The product is of similar complexity but all of it is new: there are very, very few bits of carryover. Most years we would be using – or at least modifying – parts from the previous car, but that’s not the case with the MCL36. It’s all new – and obviously, that puts significant pressure on our resources, and strain on our supply chain as well – we’re feeling a little indigestion in some of our key projects! 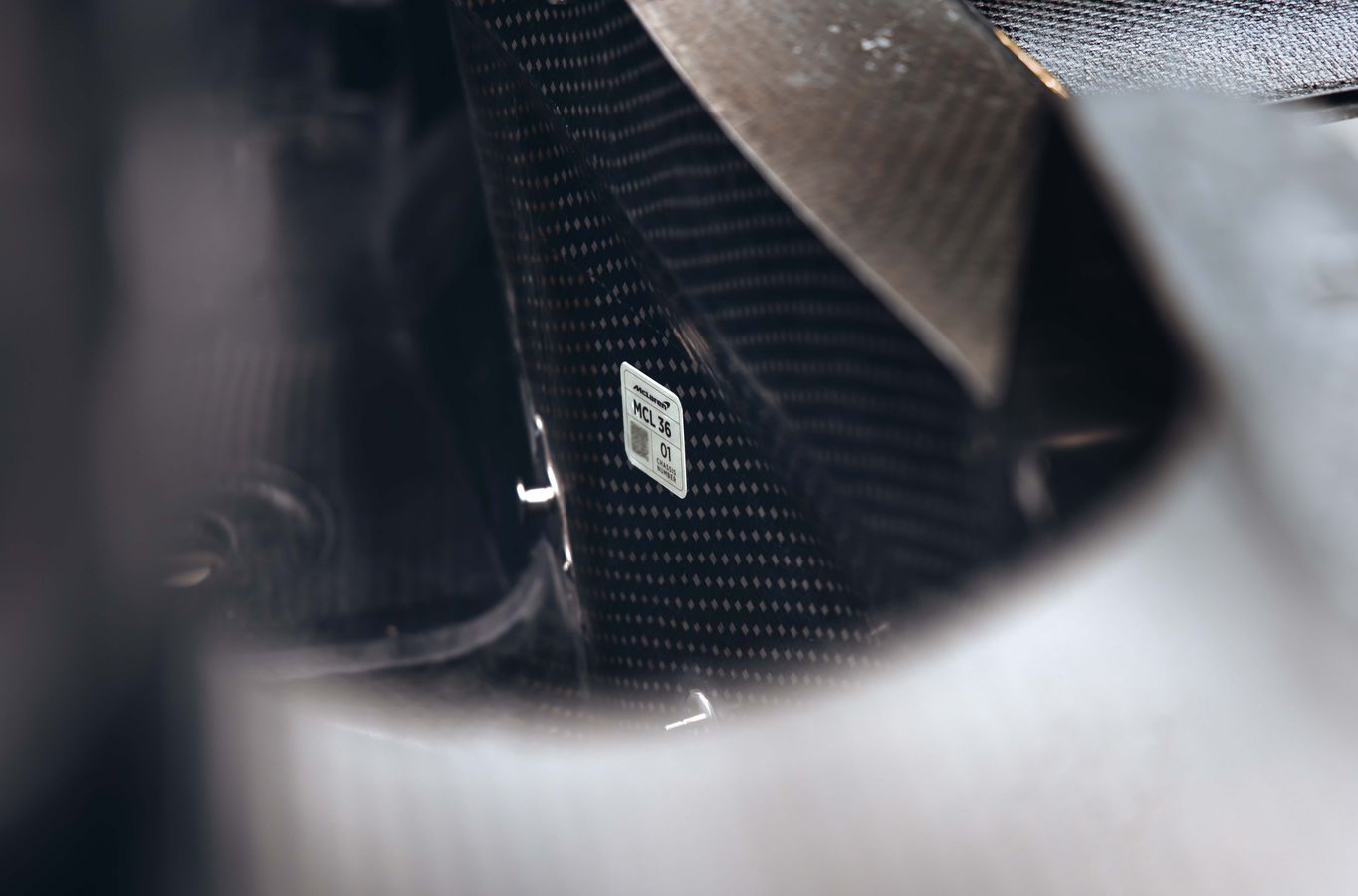 The production effort is always flat-out during the off-season. Is this car more difficult to deliver? Can you be more flat-out?

They’re all tough! It’s tricky to compare them – because they’re never directly comparable. We look at the burden of work versus a similar week in previous builds, and that’s how we know we’re doing 20% more work this year – but comparing them may be a bit subjective and perhaps not really the right way of looking at it. Building the MCL36 to the new regulations is a significant burden, but it is perhaps more the cultural change of doing some things in a different way.

We are very keen to be as late as possible and as lean on stock as we can be, to ensure there is opportunity to deliver upgrades in sync for race one. The layout of the programme is fundamentally different for the ’36 compared to previous cars. The programme is difficult, and when you factor in the constraint of the cost cap on top of a significant engineering and manufacturing challenge, that’s when you really have to rely on great teamwork, great collaboration and a total laser focus on achieving targets. Ultimately, it’s the quality of our people we rely on when it gets tough, and we’re lucky because our people are second to none.

In the past, you've said that if you’re not encountering issues, then you're probably not being aggressive enough…

That’s still true! If it’s all going smoothly, you’re not trying hard enough! You’ve not given as much time as you can to the engineering department and haven’t allowed them to squeeze every ounce of performance out of the design.

The MCL35M was our first car manufactured with covid-19 restrictions in place. The MCL36 is our second. What did we learn from the 35M experience, and have the protocols and working methods changed?

Our first experience of manufacturing with covid-19 restrictions in place was the ventilator project, which operated when the pandemic was running at very high levels. Our premise now for everything we do, as it was then, is geared around keeping our workforce safe. For the 35M, in a lot of cases, we ran a split-shift system, where we didn’t allow a day and night shift to physically see each other. That was challenging, because parts for racing cars are made faster when you can collaborate. The most important thing for a racing team is being able to cooperate and, throughout last year, with the rollout of the vaccines, we were able to change our philosophy.

From the middle of the year, when we were starting work on the ’36, we were able to allow our shifts to see each other again. Production flow in a 24-hour cycle is imperative to what we do: having the day shift run into the night shift, with a discussion of any issues and a decent handover is important. We have a good and swift testing protocol in sync with shifts, that has helped ensure the number of cases has been minimal. The situation is obviously quite fluid and will continue to be complex to manage – but the priority will remain keeping people safe. 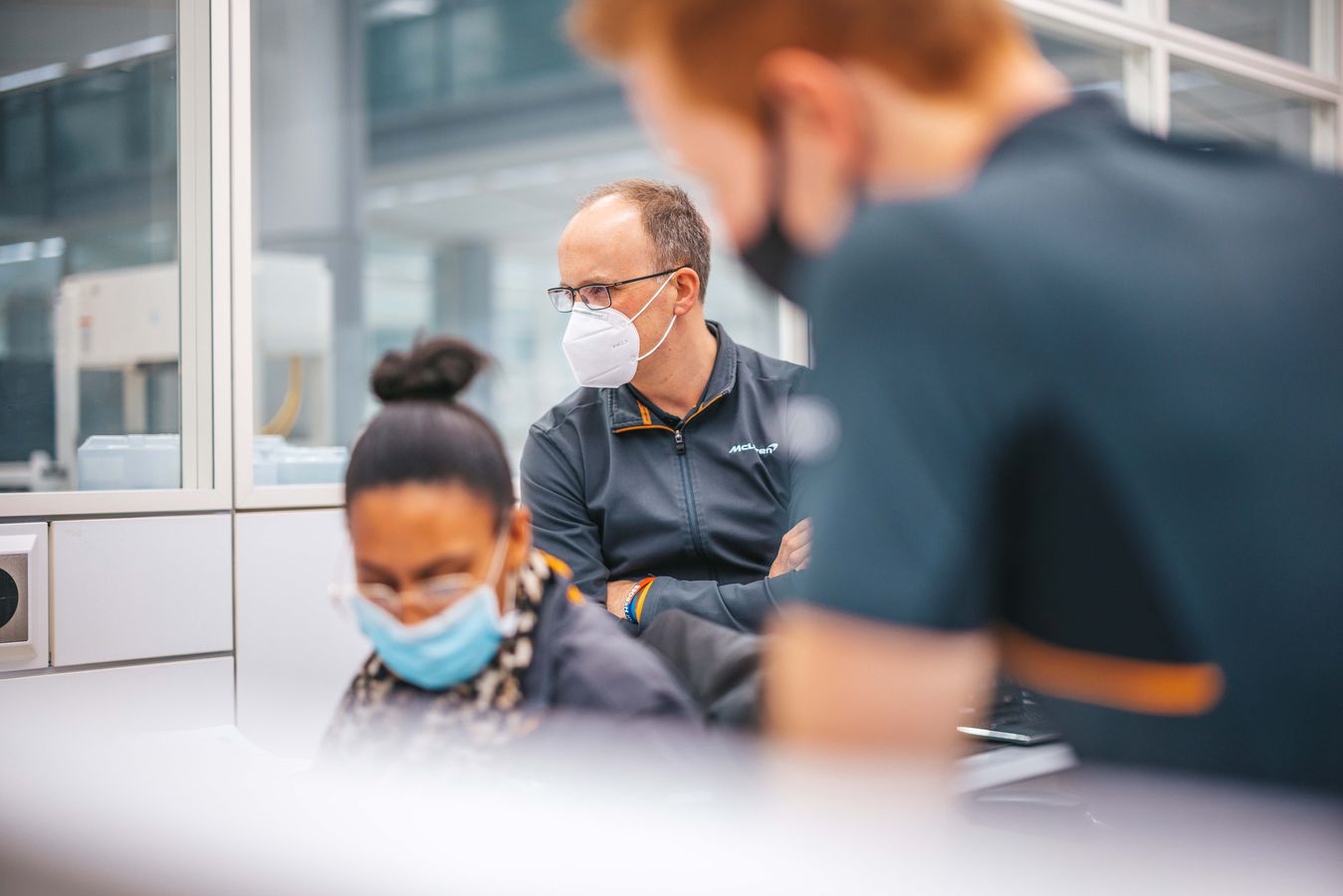 You've previously said building a car for the new regulations would be the acid test for the cost cap. How has that worked out? How do you drive those efficiencies without impacting performance?

It’s a multifaceted challenge that we’ve been working on for many, many months. You must tune the levers which will deliver an outcome. Some of that is ensuring operationally and technically we understand what things cost. We now have a live costing tool for many parts that allows everybody to understand cost much better. Again, collaboration is key, in this case using experience from across the team to evaluate parts at the concept stage, while they’re still in design, to make sure we’re owning the manufacturability of a part. Making sure known issues have been corrected; making sure when we’re using expensive raw materials or difficult and time-consuming processes, it really does need to be done in that way and we can honestly justify it.

We’re having those positive conversations upstream, during the design phase, rather than when we receive the part in manufacturing. It’s helped us gain back some run time on our machine tools, because sometimes the engineers have been able to say: ‘it doesn’t have to be done that way: if I can change it, would that be better from a manufacturing perspective?’ This is new territory for us. There’s a long journey ahead but we already have several success stories, and the drive to collaborate, and make sure our parts are as easy to manufacture as they can be without compromising performance, is already entrenched. 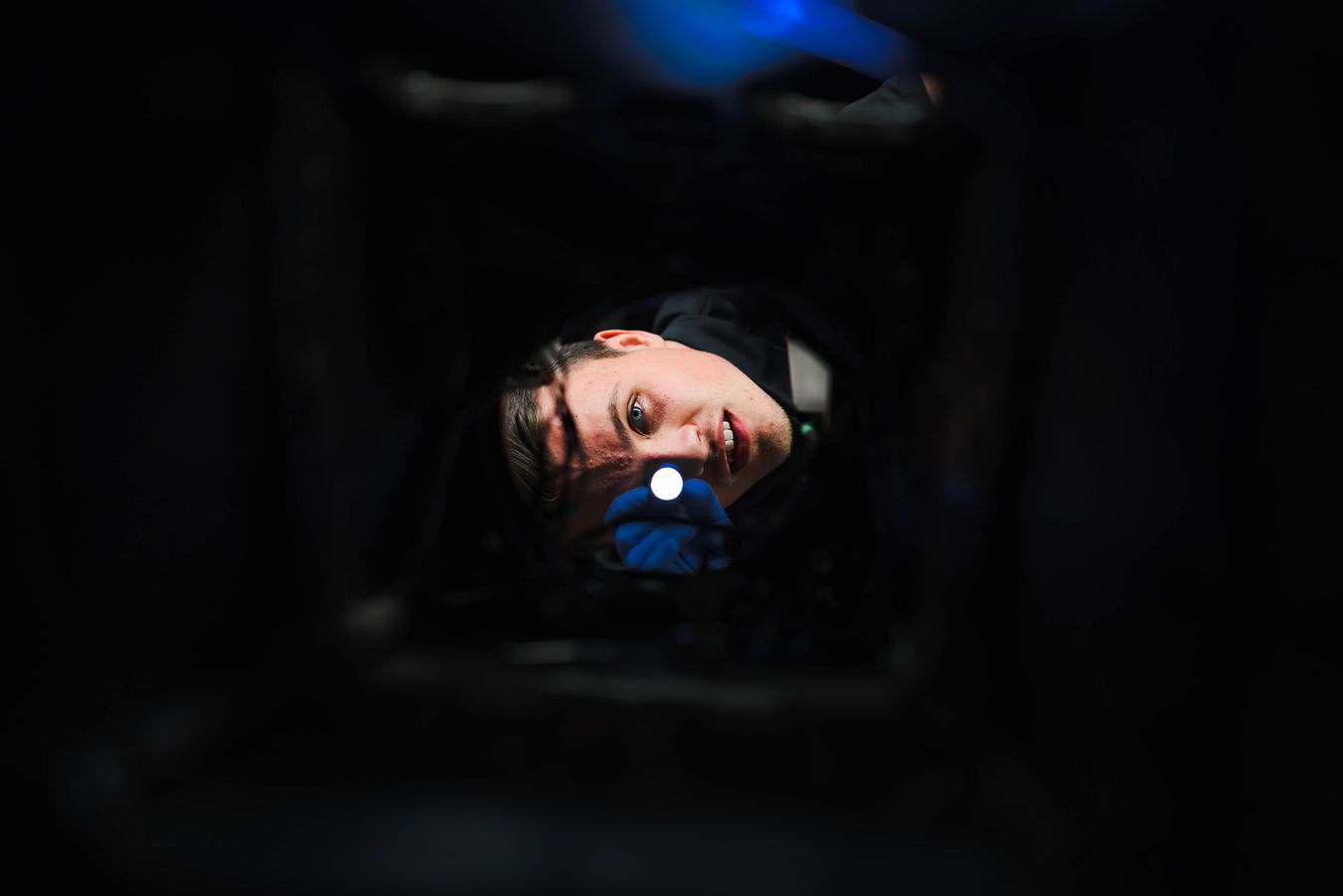 The other lever we can pull is making production as lean is it can be. We’re manufacturing fewer [spare] parts. That, again, is a cultural shift, but it will allow greater flexibility to consider upgrades. It’s a difficult trade to make but we will have smaller quantities of parts available for the ’36 than we had for the ’35M, to have room in the budget to deliver more performance.

We’re not going to ever have too few parts to run the cars, we’ll always protect that, but where in the past we would have made five or six parts, we’re dropping to five; where it was four or five, we’re dropping to four. Where there are multiple set-up options of a part to fit, we’re considering rationing how those choices are made, collaborating with the race engineers to make sure we’re providing the choices they will want to use, rather than the choices they might want to use – because every pound counts and we’ve got to make sure we’re spending wisely.

Typically, when F1 introduces a new set of regulations, there's a year or two of express development before things settle down into their normal iterative pattern. Are you expecting the tempo in manufacturing to remain high for the rest of 2022?

We know performance at race one is critical, and we’ll be delivering an upgrade package to that event – but we expect much more to follow. One of the reasons we’re being lean on stock is that we know we want to evolve the car. There are no prizes for having six floors and six front wings at the first race. We’ll be taking some subtly different approaches this year to make sure production capacity is available and can respond to aerodynamic evolution. That will be key to success this year. 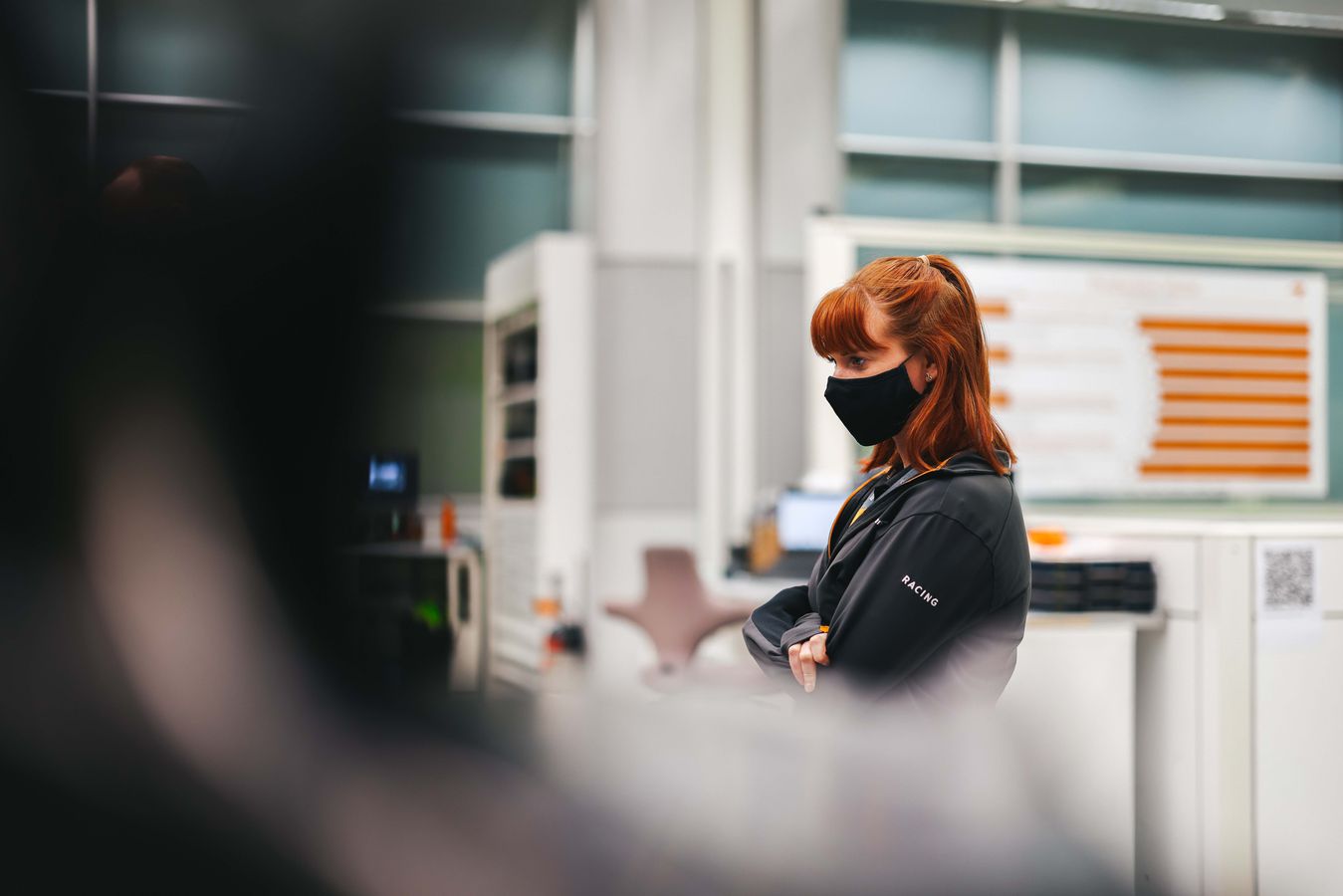 We've talked about car build – but that's not all you’re doing at this time of year, is it?

Everyone will see the MCL36 unveiled, but there’s a huge amount that you don’t see, and that also is new every year. There’s a lot more than just the car for us to manufacture and support, we also must think about everything around the periphery. The garage and pit-box equipment and the interfaces evolve as well. With the new car, all those things are redesigned as well, from jacks and wheel-guns, through to the flight cases and other packaging equipment that keeps everything secure in transit.

Finally, when the finished car is unveiled, everyone in the team will see something different reflected in it. What makes you most proud of having worked on the MCL36?

When you stand back and look at what this team does, at times it is astonishing. The level of teamwork and collaboration and resilience is the thing of which I’m most proud. When the car rolls out it will be the work of 700 people. It’s been a ten-month programme, passing through all areas of the team. It’s a phenomenal achievement. I’m really looking to seeing it on track, then seeing it perform against the rest of the grid, then upgrading it across the year. I think it’s an exciting era for the sport, with new regs and a cost cap designed to level the playing field somewhat. In the coming months it’s going to be very interesting seeing that play out.

The essential new McLaren merch for the 2022 F1 season

Zak Brown on what 2022 holds for McLaren Racing