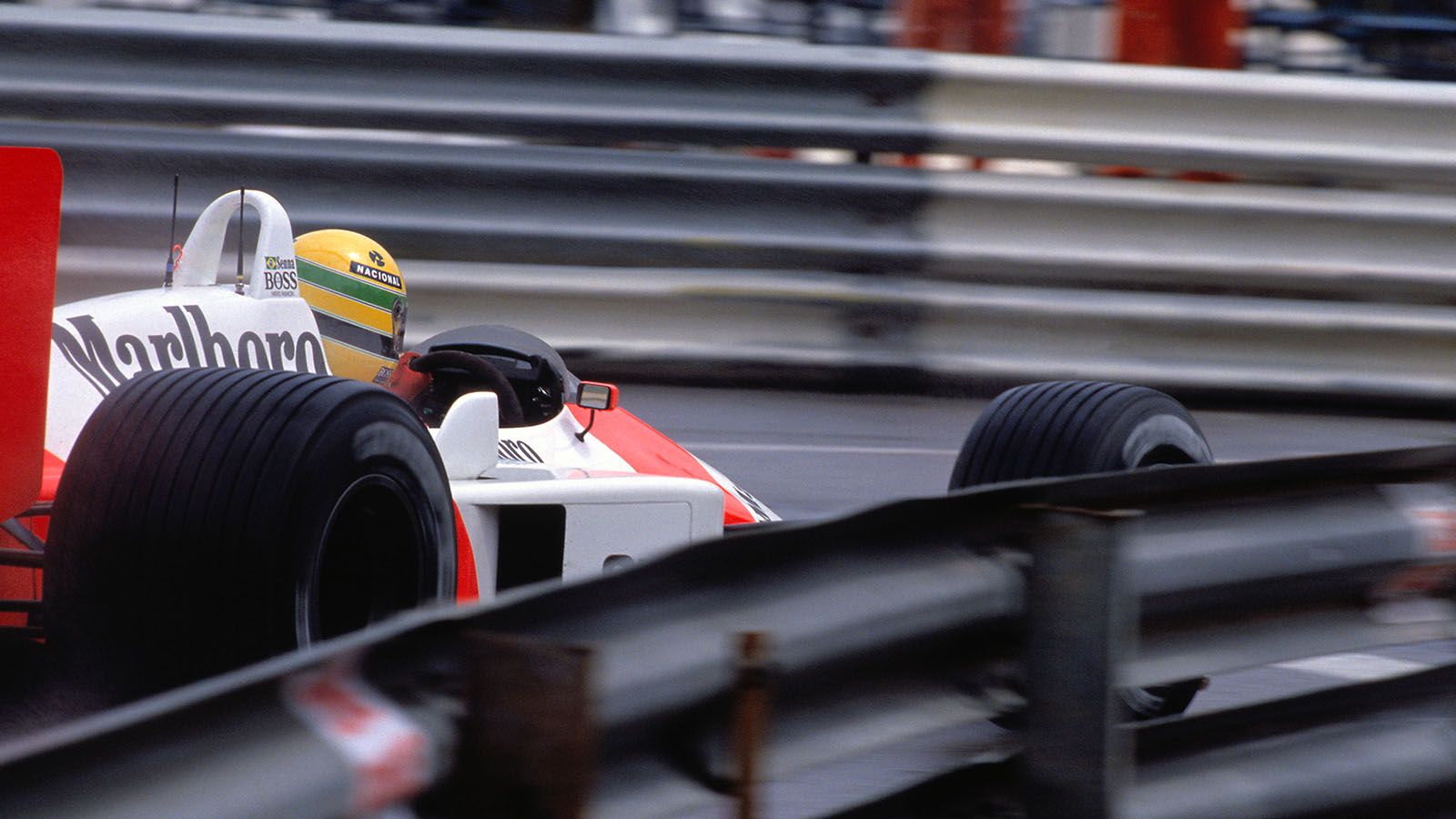 The sport’s greatest driver, armed with one of its all-time greatest cars, driving flat-out at its most iconic venue was always going to produce something special.

And it did. A Legendary Lap so incomparably quick that it transcended the sport; it became a metaphor for the great Brazilian’s approach to spirituality, to life itself. A lap that could not be comprehended by mere mortals; so dizzyingly fleet that it felt more supernatural than supersonic.

How did he do it? And how did it all come so terribly undone in the following day’s race? Read our excerpts from Maurice Hamilton’s authoritative, McLaren-produced books on Senna and Prost:

“I was running Alain’s car,” explained designer and engineer Neil Oatley. “Alain had got down to 1 minute 26.9 seconds. And then Ayrton produced a 24.4 seconds. Alain improved to a 25.4 seconds – but then Ayrton did a 23.9 seconds. I remember a kind of ghostly look came over Alain’s face; he just couldn’t understand how or where Ayrton’s time had come from. It illustrated that, despite all the technology, the driver could still make quite a big difference.”

Senna: ‘well over something conscious’

That astonishing lap would ascend into legend, particularly when Senna later thought about how it had been done. Ayrton had struck up a strong and trustworthy relationship with motorsport journalist, Russell Bulgin. The Englishman would sadly succumb to cancer in 2002 at the age of 43, but not before he had made his mark as a truly imaginative and gifted writer. Much of his talent had been spent capitalising on the friendship with Senna and a unique series of interviews. In one, recorded at a Silverstone test on 27 June 1990, Ayrton talked about the qualifying lap at Monaco two years before.

“In qualifying, we used race tyres, not qualifying tyres, so you could do many laps,” started Senna. “I remember starting; going quicker and quicker. I was on pole by a few tenths [of a second] and then by half-a-second, and then almost a second and then over a second. I was just... going, more and more and there was a stage when I was over two seconds quicker than anybody else, including my team-mate with the same equipment.

Scans of the pink sheet used during qualifying 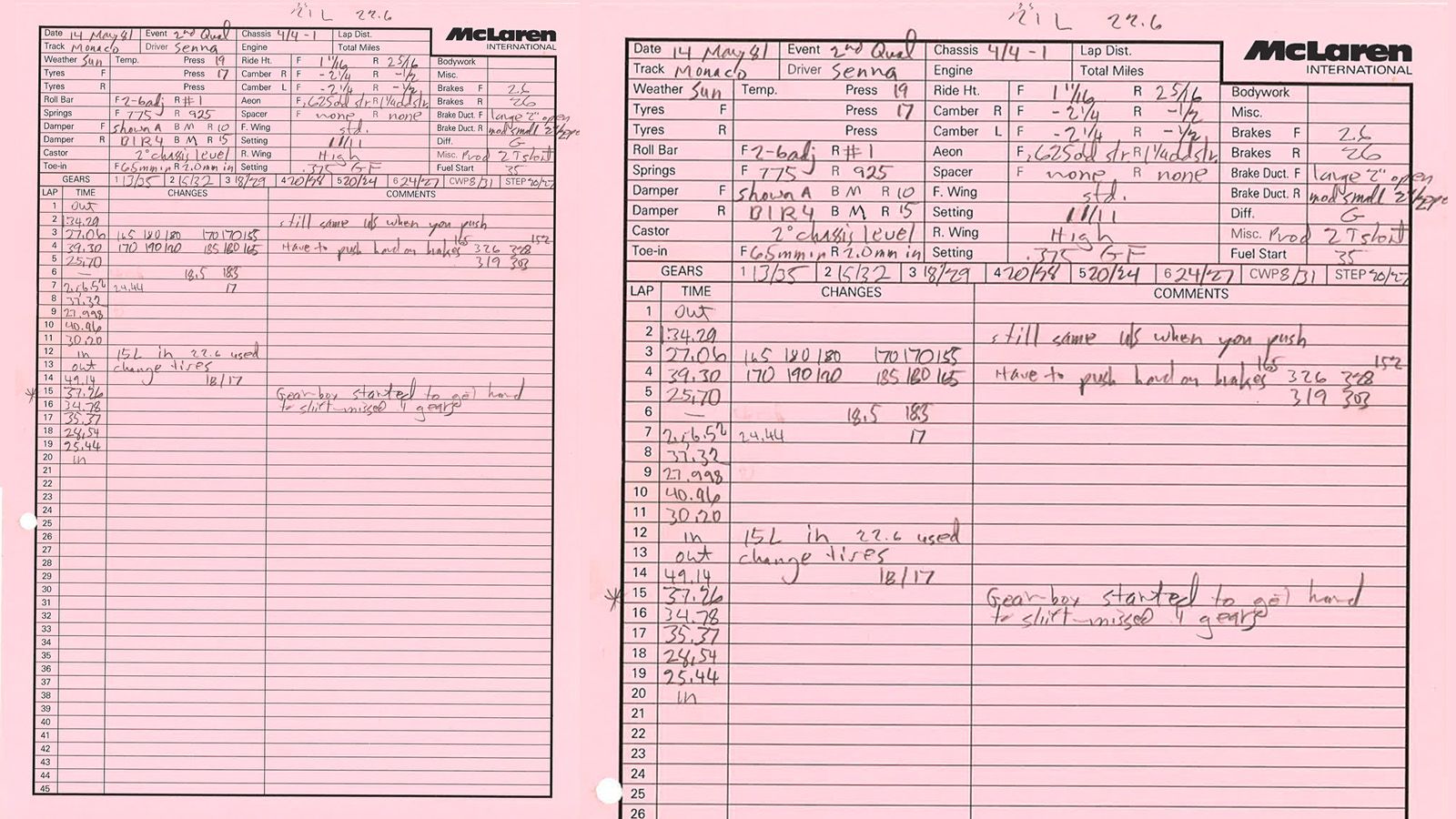 Scans of the pink sheet used during qualifying

“I realised at that moment – suddenly! [snaps fingers] – that I was well over something conscious. Monaco is small and narrow and at that moment I had the feeling that I was in a tunnel; the circuit was just a tunnel for me. It was going-going-going and within the physical limit of the circuit. It was like I was on rails. Of course, I wasn’t on rails.

“Then, suddenly I realised it was too much; I slowed down, I drove back slowly to the pits and said to myself that I shouldn’t go out any more that day. Because for that moment I was vulnerable for extending my own limits, and the car’s limits: limits that I never touch before. It was something that I was not – not that I was not in control – but I was not aware, exactly of what was going on. I was just going-going-going. An amazing experience.”

Race day: a fall from grace

Senna’s experience would be of an altogether different kind the following day. The anticipated threat from Prost would be heavily compromised when Alain missed a gear at the start and dropped to third behind a Ferrari, leaving Ayrton with a clear track on which to display his magic. When Prost finally moved into second place on lap 54, Senna was 49 seconds – or three quarters of a lap – ahead.

Aware that he had no chance of catching his team-mate in the remaining 24 laps, Alain played a psychological card by setting the fastest lap of the race.

“Of course, I knew I had no hope of catching him,” admitted Prost, “particularly Ayrton at Monaco. There was no chance. But in a situation like that, even if you only have a chance in a million, you try to exploit it. I was pushing like crazy and waiting to see what would happen.

Despite pleas from the pit wall, Senna responded. Then he backed off slightly. Whether it was the change in pace or a lapse in concentration, the result was a minor misjudgement that would have massive consequences. Senna clipped the inside barrier at Portier, the glancing blow being enough to send the red-and-white car across the track and into the Armco on the opposite side. Senna was out and Prost was in the lead; a total disaster for one and a dream result for the other.

'Crashed at Portier' on lap 67 of the grand prix 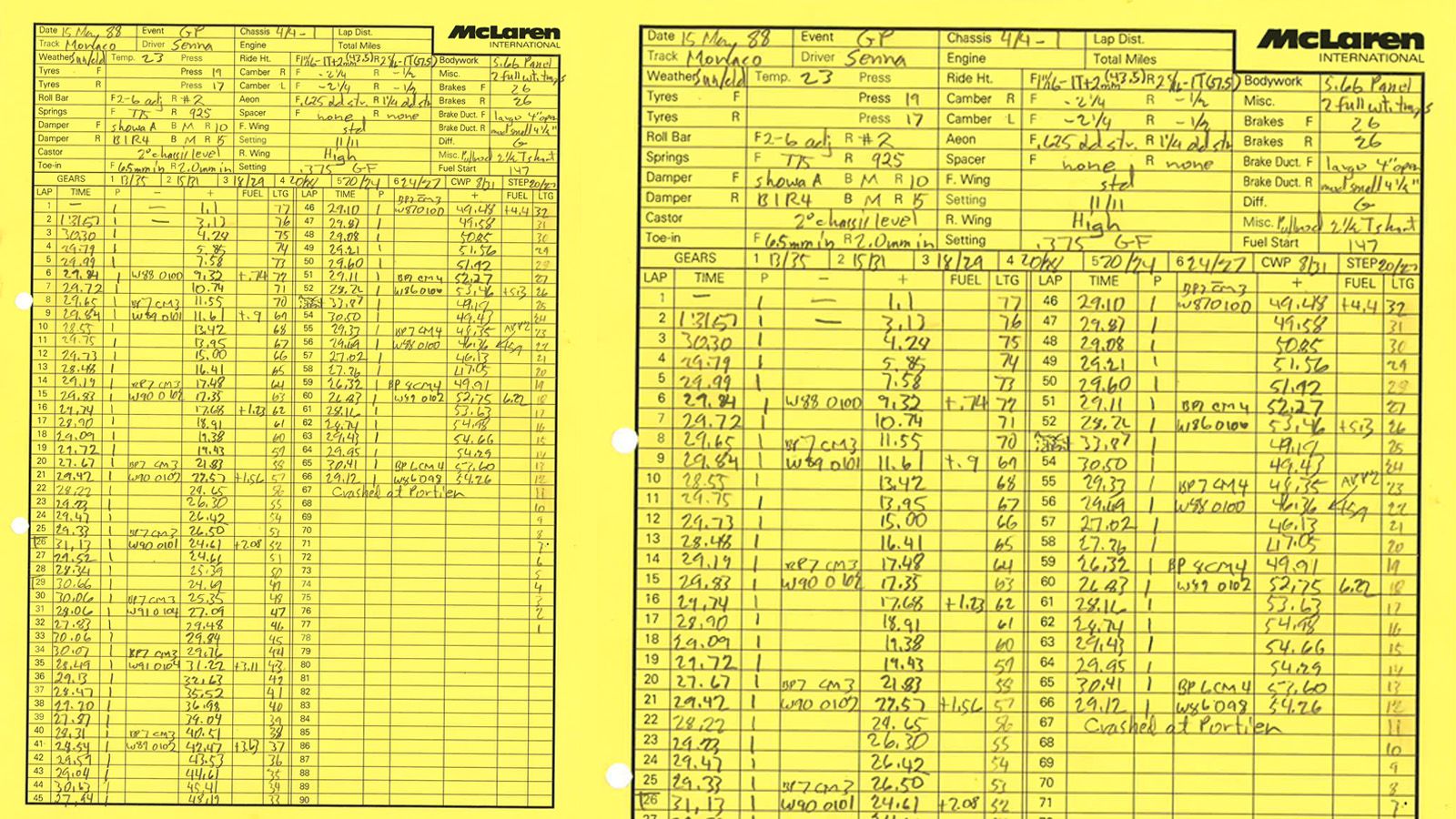 'Crashed at Portier' on lap 67 of the grand prix

For Senna, the only good thing about crashing at Portier was having his apartment just a few minutes’ walk away. He quickly retreated there and, for several hours, remained out of contact with the team. This was very frustrating for everyone, particularly the pit-crew who did not know the detail of what had happened.

Mark Hannawin was one of Ayrton’s mechanics: “We obviously knew something had happened because he hadn’t come round,” he explained. “But we just didn’t know what had gone wrong. You wonder if something was loose or broken; you ask yourself: ‘Did I tighten this; did I do that; did something come loose?’ We had absolutely no idea because there was no contact with Ayrton. We flew back to England that night, had the next day off and went into work on the Tuesday. That’s when we found out he’d just tapped the barrier. But it’s a long time to wait to discover you’d done nothing wrong.”

Team boss Ron Dennis added: “His post-accident emotion was pure anger with himself; I have never seen nor heard him more frustrated and angry. He knew that he had effectively lost concentration and made a fundamental error. He could not cope with it at all. When he finally composed himself, he was very negative about his performance and very apologetic to the team.

“Ayrton was completely dedicated, completely focused, derived tremendous satisfaction and uplifting emotional experiences out of racing and winning races. He was unique in the sense of how much of an adrenalin rush he used to get, not just from winning, but from fantastic qualifying laps and, of course, world championships. It was always an emotional rollercoaster for him.”