It was an overtaking move that cost a relationship and triggered the splintering of a team; one that would take years to heal over.

When Ayrton Senna jinked to the inside of Alain Prost under braking for the Tosa hairpin on lap one of the restarted 1989 San Marino Grand Prix, it looked like any other overtaking move. It was only after the race, and a particularly frosty podium ceremony where neither driver exchanged glances, let alone words, that the world realised that the fragile camaraderie between the two drivers had fractured.

It later transpired that Senna, anxious to avoid the sort of first-corner collision that had cost him dearly in the preceding race at Brazil, had suggested it would be foolish for the McLaren drivers to race each other. He had proposed that whoever made the best start should remain unchallenged into and through Tosa, the corner at the end of the long straight. Prost had duly abided by the agreement.

Assuming the deal would be the same at the restart, Prost made the better getaway and led through Tamburello and on towards Tosa. That seemed to be that. Except that Ayrton had other ideas and rushed into the space Prost, in his innocence, had left available as he took the normal racing line into Tosa. Senna assumed the lead and, with it, any hope of the McLaren drivers ever working together again.

“I saw him on the left and there was plenty of space and I thought, it’s okay, I’ll take the normal line to make a better exit – and he overtook me.” 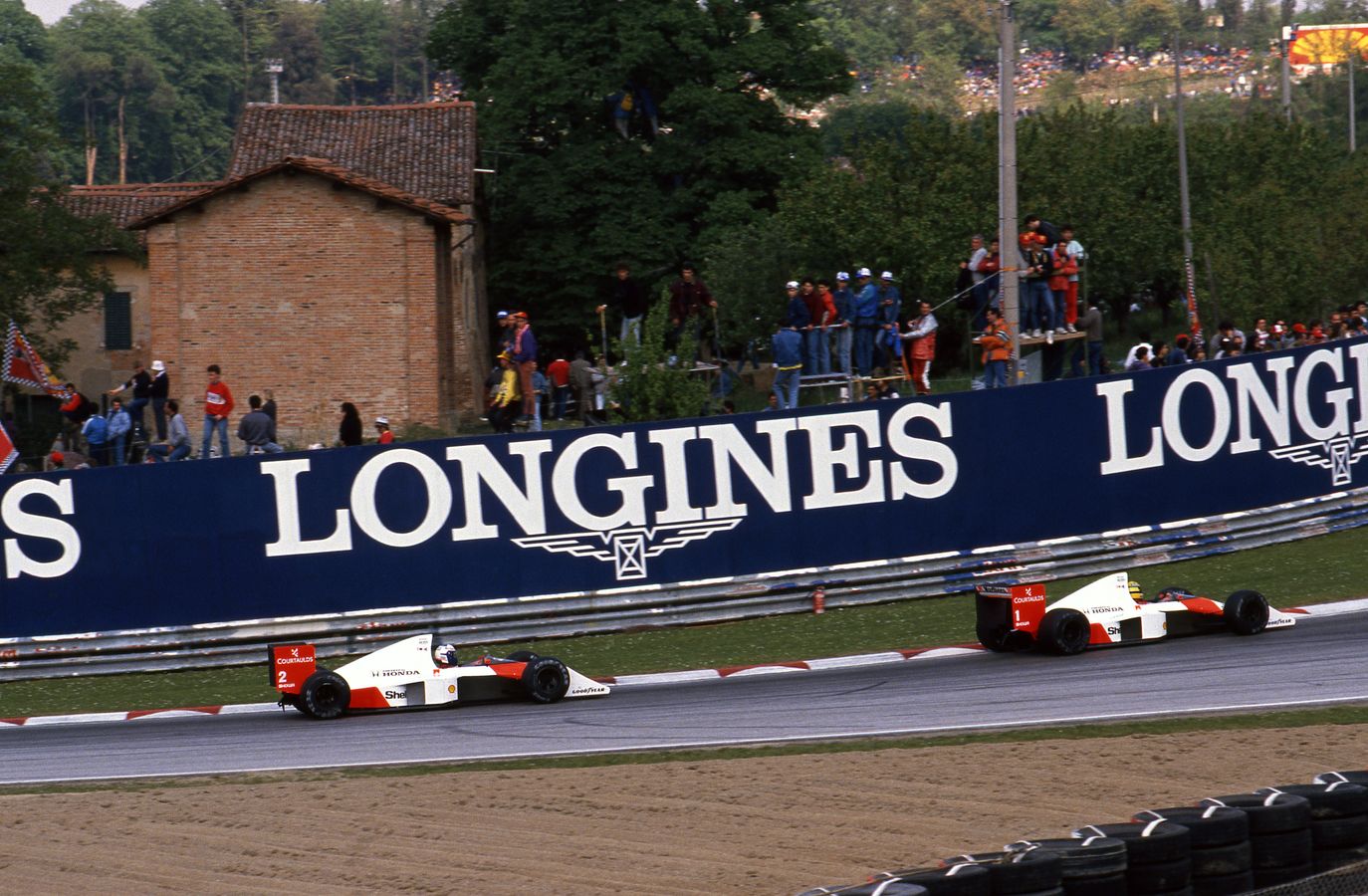 “I think there is a divergence of interpretation of the concept of this accord and then, above all, a disproportion between the consequences of the overtaking move and his [Prost’s] reaction after it.

“At the restart, he got away a little better than me but I was immediately on his tail to profit from the suction. I thus gathered speed and I made my move well before the braking area. My overtaking move was begun, in my opinion, well before the first corner and, as a result, outside the terms of our accord.

“What should I have done? Lift off in a straight line because I was going faster than him? We’re in races, yes or no? And I braked later than him; I was better placed; that’s all. Never have I wished to betray our accord; not for one second did I think it was dishonest. The agreement has always been that no overtaking manoeuvre would happen under braking at the first corner. My overtaking was initiated by slipstreaming Prost during the straight and by the first corner we were side-by-side.”

Word of the agreement filtered out during the next few days. By the time the teams had gathered at Monaco less than two weeks later, talk of a damaging split within McLaren was high on the media agenda.

Sensing trouble, team principal Ron Dennis called a press conference and explained that he had known nothing about the private agreement between his drivers. He said Ayrton had been forced to apologise to Alain, all was well with the world and it would be nice if the media would stop writing stories to the contrary.

Dennis’s optimism had been based on a head-to-head discussion with his drivers at a test session at Pembrey in Wales.

“I flew in by helicopter. The team at that time had a minibus with two bench seats facing each other and we sat there. I was so angry. It was understandable that the media were making a big story out of this – it’s what they love to do – but I felt it was not the sort of thing we needed to be dealing with.

“Without doubt, it was building up steam and was about to get out of hand. I’d thought this through. Alain and Ayrton were perfectly matched in terms of deviousness; they would play their national press; they’d go to Honda; do lots of things. My psychology was: if I can be the bad guy and make them hostile to me, then they won’t be hostile to each other. They would join forces and agree that I was being tough.

“I’m no pussycat and, in the end, I had them both in tears. It was challenging, but it was the way to handle it. Everyone went off for about 15 minutes, collected themselves, and everything was okay. My message, as always, had been that no driver is bigger than the team.”

“It was unusual for us to have both drivers at a test at this stage of the season. This was a two-day test but, because it was just after Imola, Ron flew in to speak to both the drivers and try and patch the relationship up. We didn’t know much more than that.

“I think we were the first people to test at Pembrey at the time. It was a novelty to have F1 cars there and the local council were bending over backwards to help. There was a fish and chip van which would normally have been sitting on the sea front or wherever and the council arranged for it to come and do lunch for us.

“From our point of view, the test seemed normal. I remember we all sat at a picnic bench eating fish and chips. Although we obviously didn’t realise it at the time, that was probably the last time the drivers spoke to each other.”

“In the meeting with Ron, I did not talk. I just listened. Ron asked Ayrton if there had been an agreement and he said yes, there was, but only for the first start, not for the second. But, more important, he said I had overtaken him! I said I don’t know how many million people had seen what happened on television: he had overtaken me and this was not what we had agreed. It took maybe 20 minutes before Ayrton would accept what had happened. It was unbelievable.”

“In the beginning, the French journalists could see the atmosphere between Senna and Prost was very good. But then it changed at Imola. Alain asked Johnny Rives [motor sport correspondent for L’Equipe] and I to go with him on his jet to the test in Wales. On the way back, he talked to us about the deal with Senna at Imola. He said that Ron had been really upset and he was very, very hard with Ayrton. He had said to Ayrton: ‘If you have a deal, you must respect it’. Alain told us that Senna was crying. Then Johnny wrote the story.”

Dennis had finished his press briefing at Monaco by denying there was a rift within the team: ‘It’s not right that we should be portrayed this way,’ said Dennis. ‘McLaren likes to have fun while racing.’

Dennis was hard-pressed to see the funny side when L’Equipe hit the streets the following morning. Prost, who claimed he had been speaking off the record to Rives, was quoted as saying: ‘I do not wish to drag McLaren into difficulties caused by the behaviour of Senna. McLaren has always been loyal to me. At a level of technical discussion, I shall not close the door completely but for the rest I no longer wish to have any business with him. I appreciate honesty and he is not honest.’

Senna, deeply upset by the story, was just as forthright with his response. ‘I am persuaded that, in acting like that, Alain wanted to implicate me, make me carry the can, make me culpable, in a phrase: put pressure on me,’ said Ayrton. ‘Since that day [publication of the interview] it’s finished. I don’t want to hear any more talk about that guy.’

“From that moment, there was no conversation between the two drivers for the rest of the season. In the debrief room, there would be the two drivers, Gordon Murray and two engineers – Steve Nichols and myself. Ayrton would ask me questions about what our car was doing and Alain would ask Steve. Occasionally they could manage a ‘Hello’ but that was the limit of their communication. Apart from that, the rest of the team was immune to what was going on between the two drivers although I’m sure Ron was getting it in the ear from both of them.” 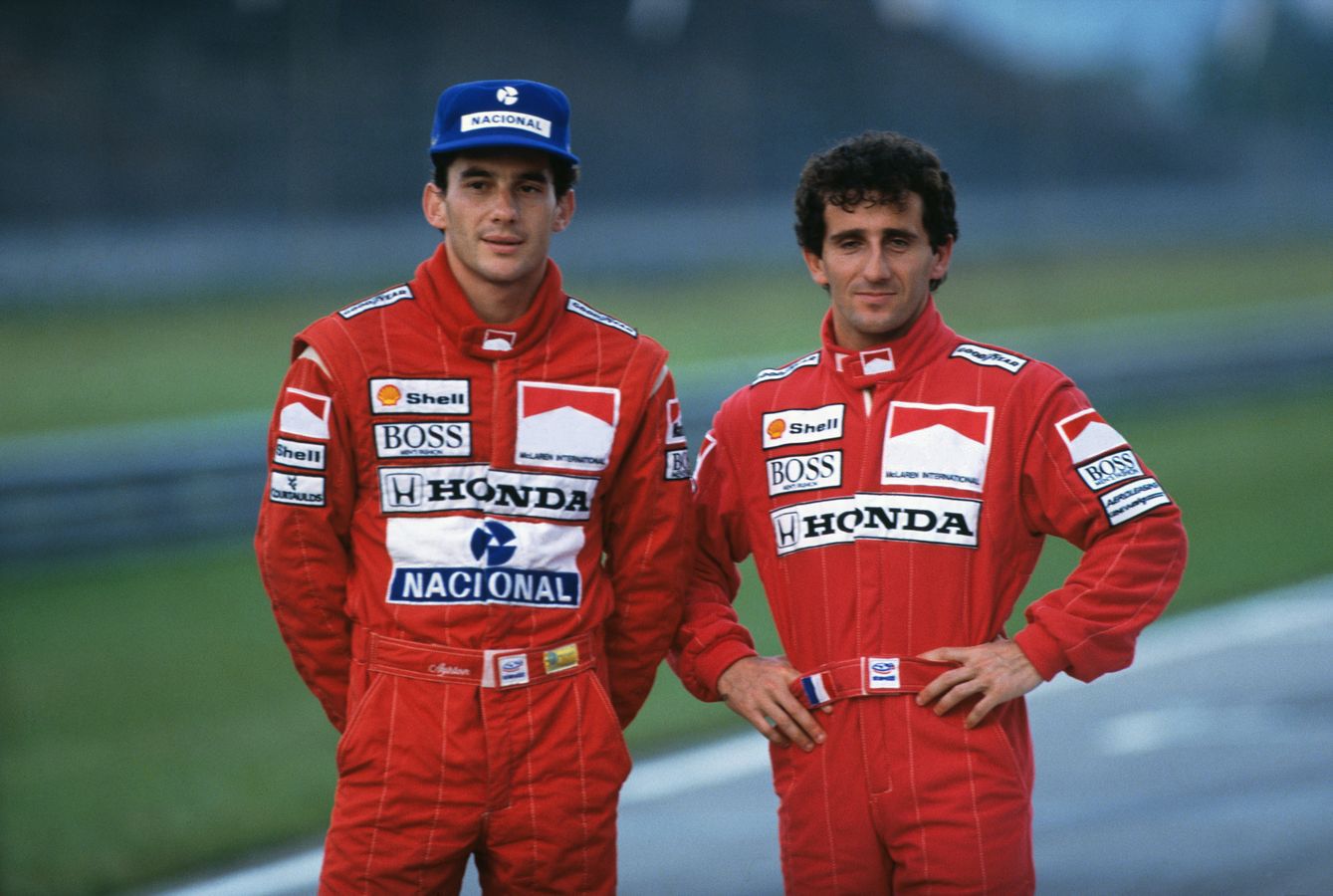 “There had been an atmosphere in McLaren where people were heading off with their own race engineers and doing a debrief and then choosing tyres and stuff. I insisted that the debrief was done with both race engineers present and both drivers present and that I heard everything that was going on. They might not have liked it, but there was very little chat between the two of them at this point in any case. But at least everything was out in the open.

“I used to threaten them with all sorts of retribution if I caught them talking separately with their engineers. We managed to download all the information. There might have been – and I’m sure there was – psychological double and triple bluffing, but that’s always been there.”

“We managed the garage very well. It was always one team servicing the two cars. Each car had its own crew, but when one car had a lot of work on it, the other crew would come over and help and I managed to keep everything on a pretty even keel. It was the same when it came to pit-stops. It was just one of our cars coming in; what happened on the circuit was nothing to do with us.

“I wasn’t dealing with them from a management point of view; I just had to make sure we did the best we could in the garage and deal with everything absolutely fair and square. But it was pretty obvious towards the end that things were very fractious.”

Events became so fractious that, by the middle of the year, Prost had announced his forthcoming departure from a team he considered his home and family at the end of the year.

The pair’s on-track rivalry continued into the following year, when they collided messily at the Japanese Grand Prix; Ayrton’s McLaren spearing into Alain’s Ferrari as the whole field barrelled into the first corner at Suzuka.

It was only at Prost’s final race, the 1993 Australian Grand Prix – a race, incidentally, won by Senna – that the pair effected a truce. Senna pulled a somewhat surprised Prost onto the top step of the podium in acknowledgement of their great rivalry in their final grand prix together.

It would be the last Formula 1 podium for either driver…

Quotes taken from the Ayrton Senna and Alain Prost editions of McLaren Greats, by Maurice Hamilton.

How Ayrton and McLaren won the European GP

Beating the odds in Adelaide

The three-way showdown that led to Prost's second championship