Shining a spotlight on mental health

Shining a spotlight on mental health

Both drivers will wear the helmets this weekend at the Nürburgring track in Germany, as one of a number of initiatives by McLaren to shine a spotlight on mental health and raise vital funds for Mind to support the invaluable work the charity is doing to tackle the mental health crisis.

The helmets bring to life the designs created by Lando and Carlos during their helmet painting challenge for Mind in August and have been homologated for use over the race weekend at the Nürburgring. The original helmets painted by the drivers, using special paints supplied by McLaren partner AkzoNobel, were entered into a prize draw for fans to take part in with a minimum £5 donation to Mind, and raised an incredible £70,250. 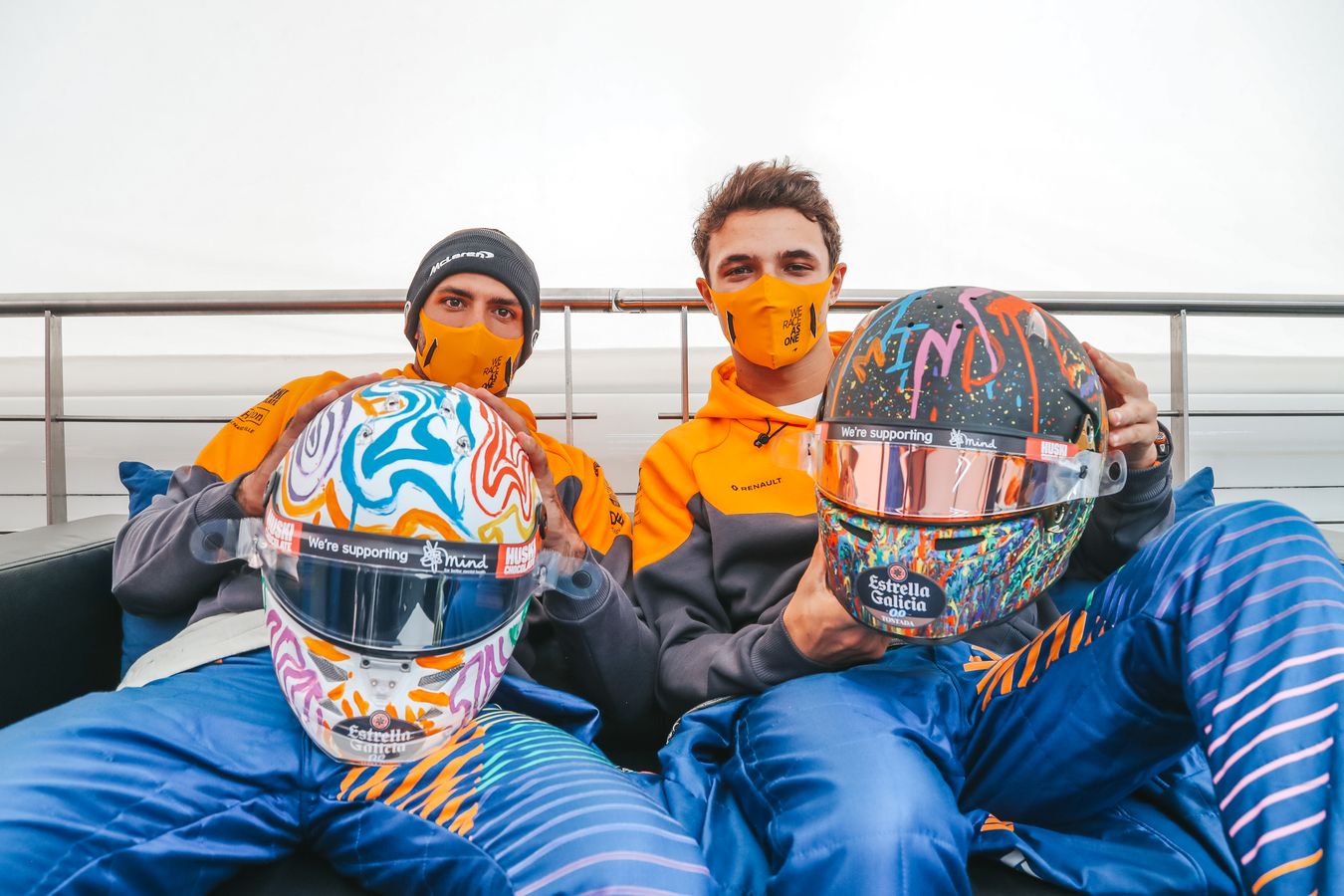 Since launching the partnership with Mind in July, McLaren has so far raised more than £190,000 through donations from fans and team members, including the #MoveforMind challenge, ecommerce sales of merchandise and a prize draw of the drivers’ own helmet designs. This sum – which is increasing daily – is being donated directly to Mind, whose work continues to support those most affected by the covid-19 pandemic.

In support of World Mental Health Day, McLaren and Mind will again team up to launch a prize draw on 29 November, giving fans the chance to win the drivers’ race-worn helmets and support the charity by entering via a donation. More information on the prize draw and ways to enter will follow.

From today, a special black edition of the #WeRaceAsOne t-shirt based on Lando Norris’ Eifel Grand Prix race helmet design is available to pre-order via the McLaren Store, with 100% of the profits going directly to Mind. Fans are also encouraged to support Mind by donating at mind.org.uk/mclarenformind.

To mark World Mental Health Day, McLaren has this week launched a content series in partnership with Mind, focusing on mental health challenges as told by our own people. The opening episode of the series can be viewed on McLaren’s YouTube channel, and features first-person accounts shared for the first time by a number of team members who were part of the group quarantined in Melbourne following the cancellation of the Australian Grand Prix, after a member of the McLaren team tested positive for covid-19.

During the Eifel Grand Prix weekend, ‘We’re Supporting Mind’ and ‘#WorldMentalHealthDay’ feature on the inner halo of the MCL35, with Mind branding also on the helmet visors of drivers Lando Norris and Carlos Sainz. The Mind logo will continue to feature on the MCL35 engine covers and pit-crew helmets for the remainder of the 2020 Formula 1 season.

In the month leading up to World Mental Health Day, the entire McLaren Racing team, both trackside and at home, has also been taking part in Mind’s #MoveforMind fundraising challenge by getting active for better mental health. More information on the challenge and how you can take part can be found here: https://moveformind.blackbaud-sites.com/. All team members at the track and McLaren Technology Centre will be wearing a Mind pin badge on World Mental Health Day to show their support for the charity and raise awareness of prioritising mental health.

“This weekend is important for our whole team as we mark World Mental Health Day and raise awareness of the work of our charity partner Mind in fighting the mental health emergency. The coronavirus pandemic continues to have a huge impact on mental health for millions around the world. Advocacy of better mental health is something we critically value at McLaren and continuously strive to educate ourselves about, to provide the necessary support to our people.

“We are proud to have partnered with Mind as our chosen charity in support of the #WeRaceAsOne campaign, and the sum raised so far is an incredible effort, from which Mind will be able to help more people experiencing a mental health problem. Thanks to the fantastic support for this great cause from our own team members, our fans, partners and our two drivers, we can continue to support Mind, and crucially raise awareness of important mental health issues.”

“We are delighted that McLaren has chosen to support Mind this World Mental Health Day and for the duration of the season, and we are incredibly grateful to have this opportunity to raise vital funds and awareness.

“The awareness and funds generated through this partnership enable us to continue to provide advice, information and support so that no one has to face their mental health problem alone.”

The boys get creative for a good cause