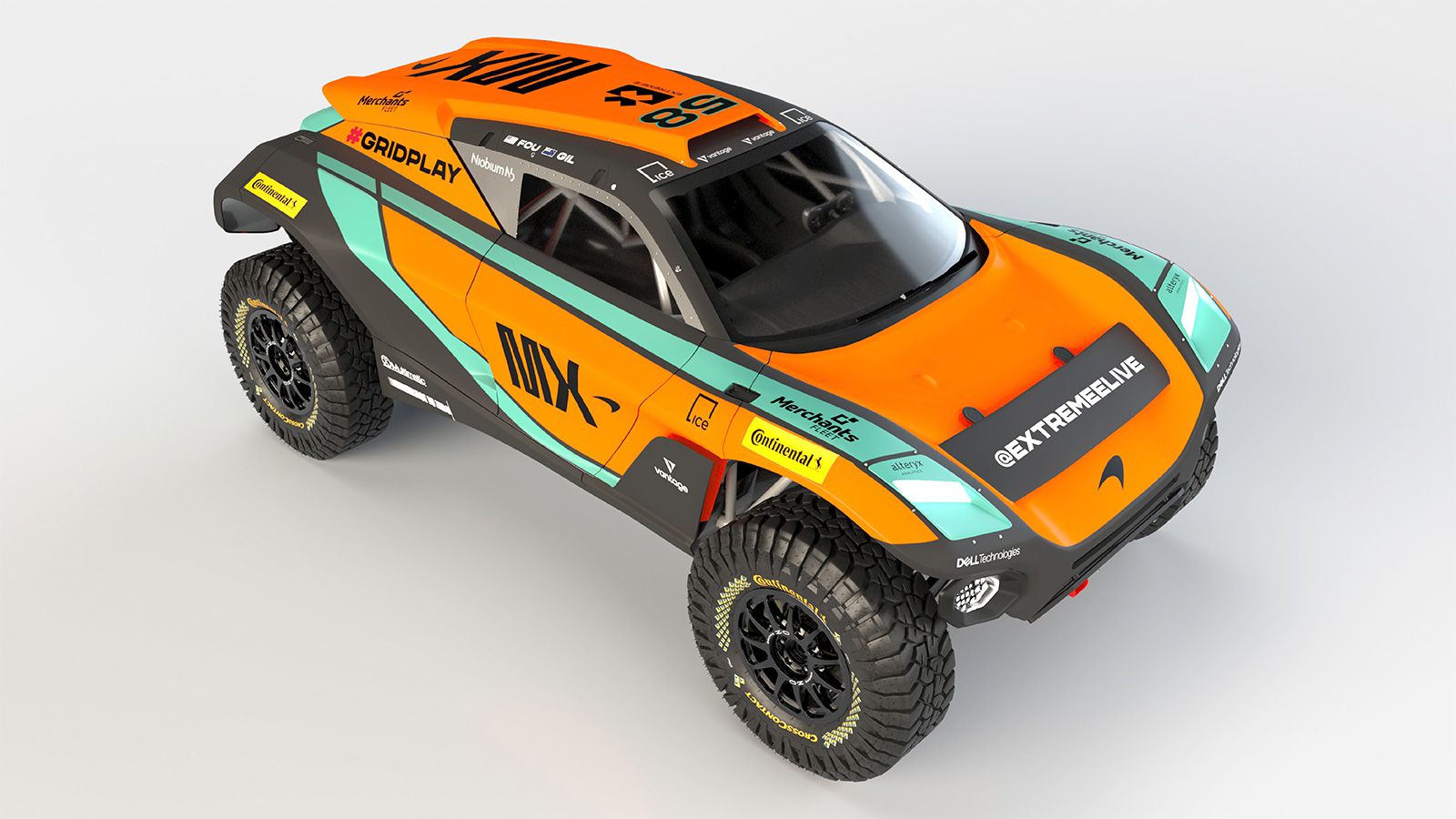 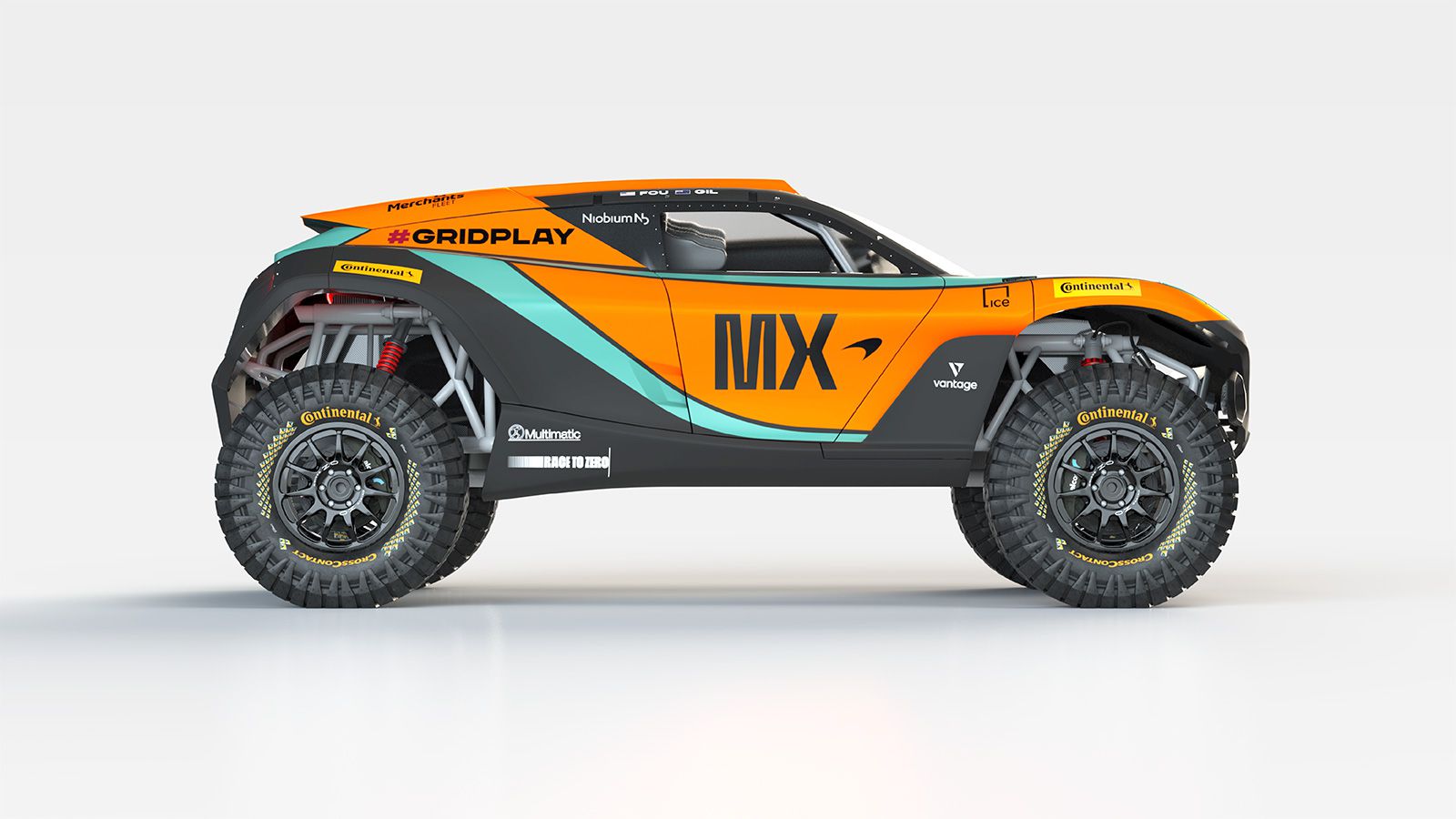 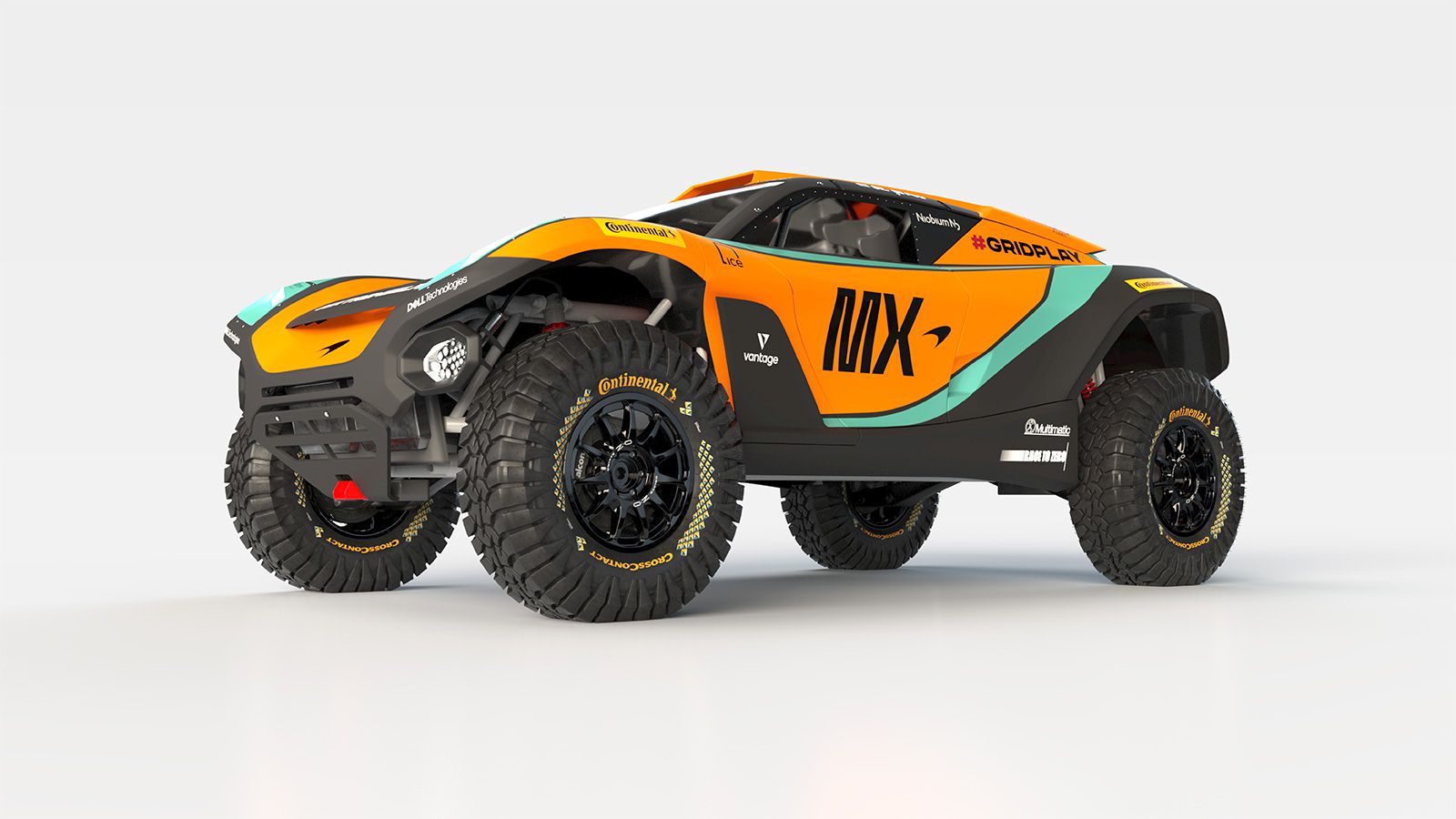 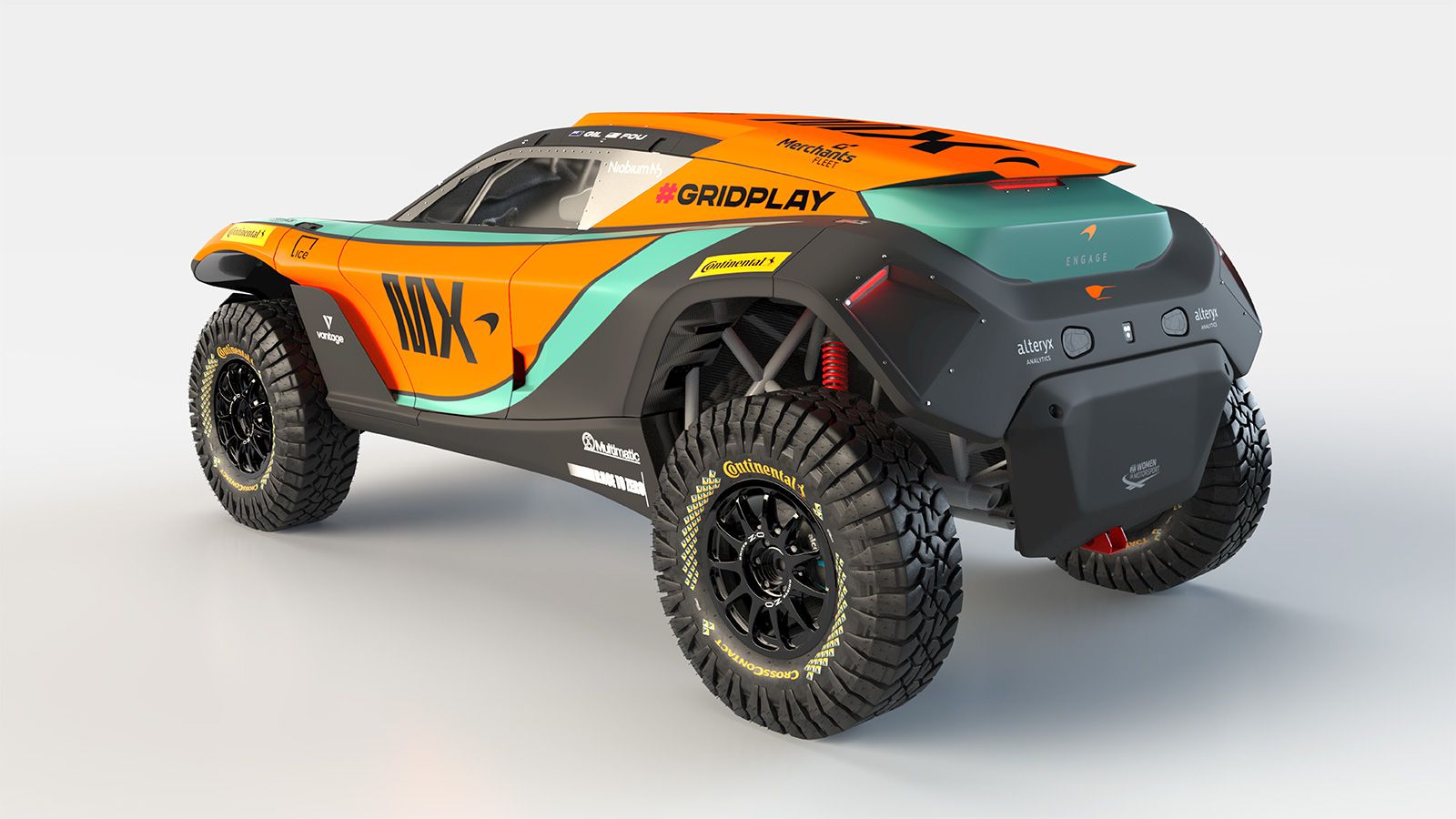 McLaren Racing today unveiled its new livery for its Extreme E car alongside the team’s Formula 1 and INDYCAR contenders, each sporting common livery colours to unify the McLaren Racing family ahead of their respective seasons.

Taking its lead from the MCL36, the McLaren MX Extreme E car was displayed wrapped in a base of anthracite overlaid with a boldened and bespoke Fluro Papaya and Oceanic Blue and, in a fitting tribute to Bruce McLaren, will run with a heritage McLaren race number for its inaugural entry into the 2022 electric off-road racing series. The number 58 was used in the first race that Bruce entered, back in 1952, driving his father’s Austin 7 at the Muriwai Hillclimb in New Zealand.

Competing for the McLaren Extreme E team are drivers Emma Gilmour and Tanner Foust, who share duties behind the wheel, as part of the sport’s commitment to gender equality, diversity and inclusion.

Emma Gilmour was announced as McLaren’s first-ever female racing driver in November of last year, during an engagement at COP26 with His Royal Highness The Prince of Wales. She is also a compatriot of McLaren’s founder Bruce McLaren and joins a small yet illustrious group of female racing drivers to hail from New Zealand since Sybil Lupp switched from mechanic to motor racing in 1947. Emma is known for her vast experience in rallying, rallycross and cross-country rallying.

Joining her as team-mate is American Tanner Foust, one of the most popular and successful names in world rallycross and a four-time and current U.S. rallycross champion. He is world-renowned as a versatile, multi-talented driver famous for his supreme car control and track record of podiums, national championships and world records.

Unusually, and unlike any other race series, the drivers and engineers have not seen their race car since it boarded Extreme E’s flagship and ‘floating laboratory’, the St. Helena, at the end of December in the UK to set sail for Saudi Arabia. They will be reunited with their vehicle shortly before the Desert X-Prix which takes place in Neom on 19-20 February, making McLaren the 10th team on the grid. Aside from the obvious difficulties of driving on sand, the teams will have to navigate various natural obstacles including dune grass and bushes as well as deep crests during their inaugural race.

Extreme E embeds gender equality and diversity, with each team consisting of a male and a female driver who share equal driving duties, with a driver swap in the middle of the race. Joining Emma and Tanner at launch were sisters Leena and Teena Gade, who are McLaren’s Extreme E Race Engineer and Performance Engineer respectively. Their own career trajectory is redolent of the McLaren Racing Engage alliance, which exists to open-up STEM opportunities to all. This strategic alliance with The Smallpeice Trust, The Women’s Engineering Society, Equal Engineers and Creative Access, will drive forward a programme of initiatives to diversify talent in motorsport.

Completing the line-up, and announced today as McLaren’s Sporting Director, Extreme E, was Mark Grain, who first joined McLaren in 1994.

In line with the sport’s premise to raise climate awareness in the locations in which it races, the Desert X-Prix will highlight the causes of desertification, the loss of biological diversity, and the importance of resilience in this vulnerable region. 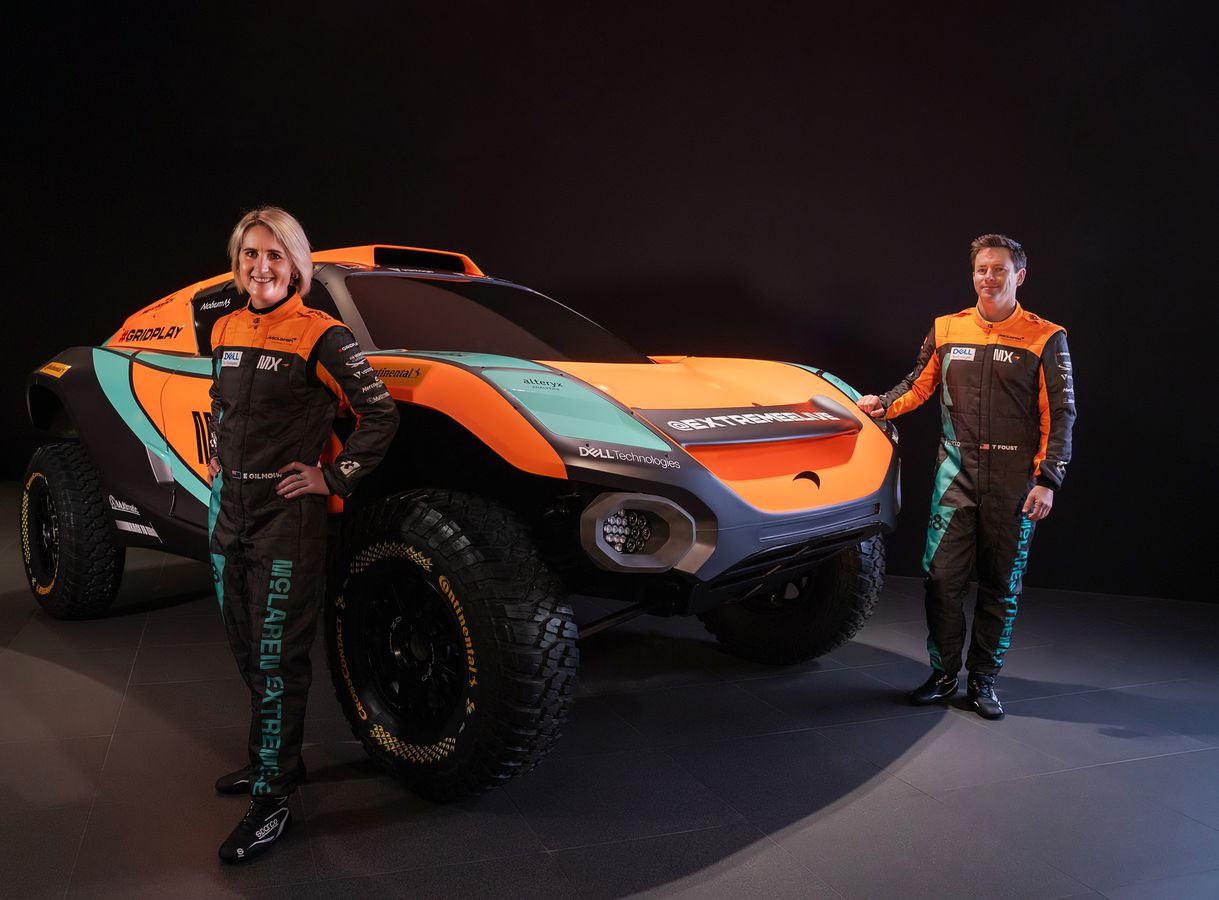 “We can’t wait to get racing. This is about as different as it gets from other racing series, and it is going to be a huge learning experience in terms of the different terrains in which we race as well as the environmental challenges these parts of the world face. So much of this is going to be about education in terms of raising climate awareness as well as to expect the unexpected! In Tanner and Emma, we have a dynamic and high-achieving driving team and in Leena and Teena Gade, we have two top-flight engineers helping to keep our car on the road. It’s going to be an exciting start to our first season that’s for sure.”

“After the winter break Tanner and I are ready to get back in the car and we certainly can’t wait to be reunited with ours in its spectacular new livery. We haven’t seen the car since the ship left the UK to transport the cars to Saudi at the end of December. It’s going to be some reunion! We’ve got a great small team ready to see us through our first season as well as some epic and challenging race locations. I can’t wait!”

“Extreme E is going to use every single driving skill I have, including stunt driving. There couldn’t be a more challenging series when you think about the locations in which it races. I was a science major so I can’t wait to find out more about the legacy programme and see the travelling scientists in action. Emma has had a bit of a head start as she participated last season, so she knows more about what lies ahead but I’m embracing the challenge of the unknown. We only have five races to make our mark and plenty of time in between to work on our strategy, so the sooner we get started the better.”