As we descend on the Circuit Paul Ricard with Pirelli for the wet weather tyre test, it’s made us nostalgic for those frantic, unpredictable, blink-and-you’ll-miss-it races under rain, storms, winds and anything else mother nature likes to throw at an F1 car. Here, we reminisce about nine memorable wet weather races, famed for their frenzied action and epic drama.

Nothing screams excitement in an F1 race when a title goes down to the wire, and then the heavens open. Race day saw heavy rain, fog and running water on many areas of the track, and some drivers, including title contender Niki Lauda, were unhappy with the decision to race in the conditions. Lauda withdrew from the race on lap two, refusing to race. 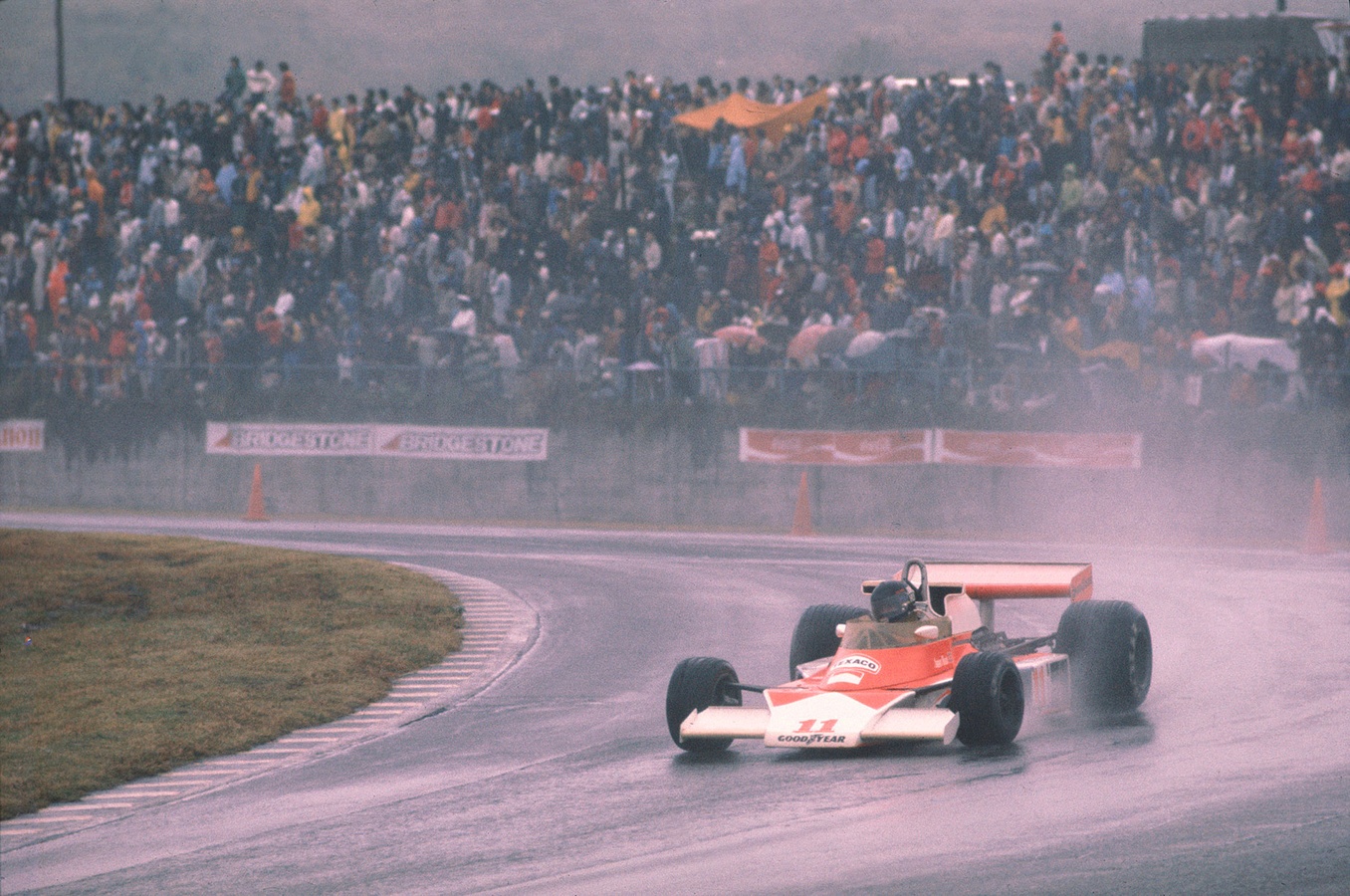 James Hunt took the lead from the start in his McLaren in the torrential downpour, but as the track started to dry out he started to slip down the order. He then battled a slow puncture, had to pit for fresh tyres on lap 64 of 73, and dropped to fifth. Needing fourth to clinch the title, on lap 72 he overtook Alan Jones and Clay Regazzoni to become 1976 World Champion.

Ayrton Senna started fourth on a damp track, and was blocked by Michael Schumacher, dropping him down to fifth. Like a bull at a rag, Ayrton set about making his way back through the field, overtaking Schumacher and then Wendlinger at the famous Craner Curves. He then saw off Damon Hill at MacLean’s corner, gaining second position and started to chase down the race leader. Ayrton fixed his sights on his target, and overtook Alain Prost at the Melbourne Hairpin, penultimate corner – all on the first lap!

The race was far from won, however: Ayrton suffered a mechanical problem, lost 20 seconds, and fell back down to second place. The rain came yet again, and while Alain and Hill in first and third pitted, Ayrton stayed out – the perfect decision on a track that had once again begun to dry out. 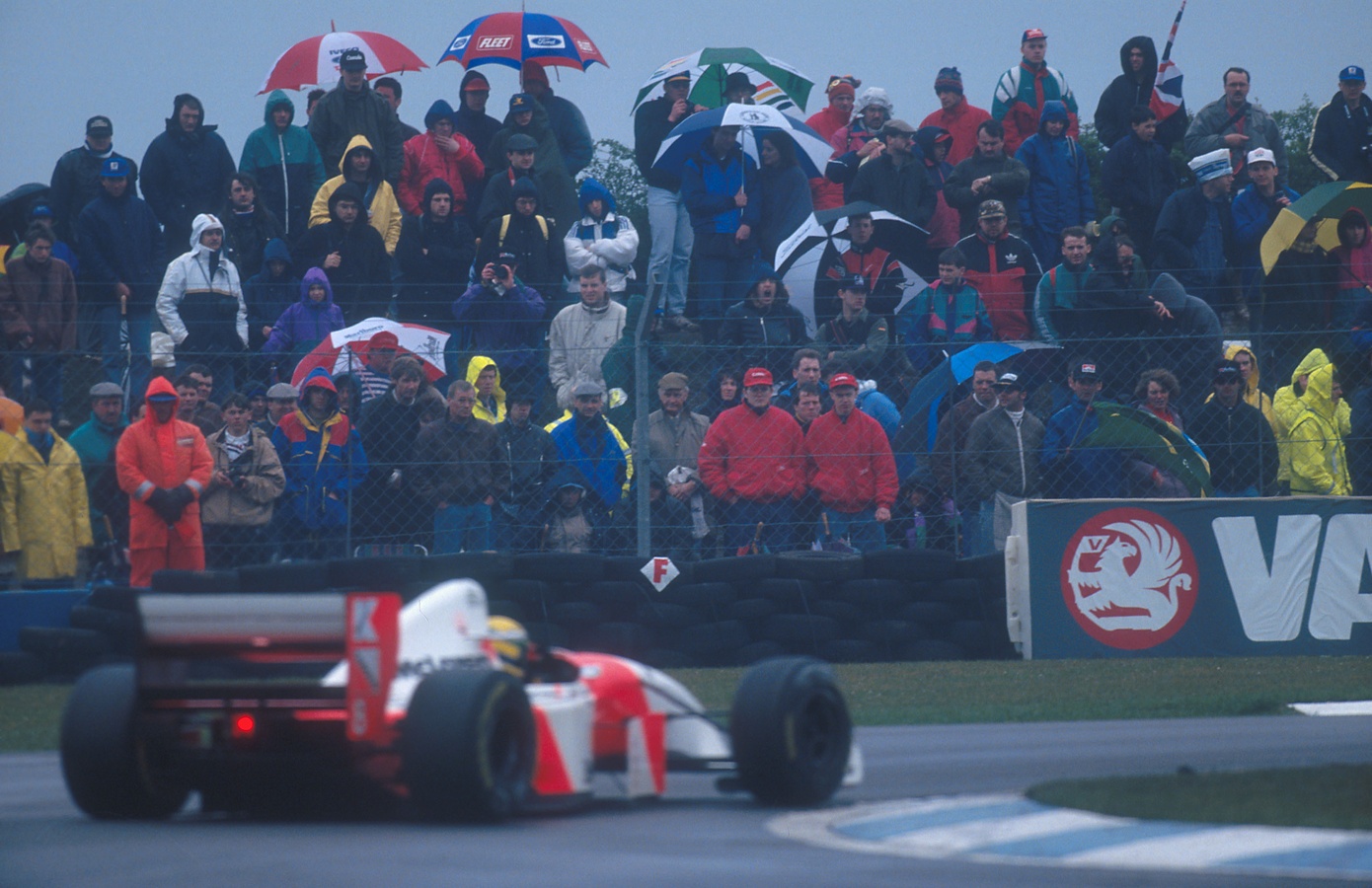 Senna regained the lead, set the fastest lap on lap 57 of 76, and crossed the finished line to win, after managing only 4 pit stops in the ever-changing conditions, compared to Alain’s seven. Ayrton had also lapped every car in the field except one, and finished over a minute ahead of Hill in second place – cementing his legendary status in the wet.

At the start, Ayrton Senna swept past Damon Hill to take second place. The leader, Alain Prost in his Williams-Renault, built up a huge lead, while Ayrton struggled and was re-passed by Hill on lap 11. On lap 25, Ayrton was handed a stop-go penalty for lapping a backmarker under yellow flags, and slipped down to fourth behind Michael Schumacher. 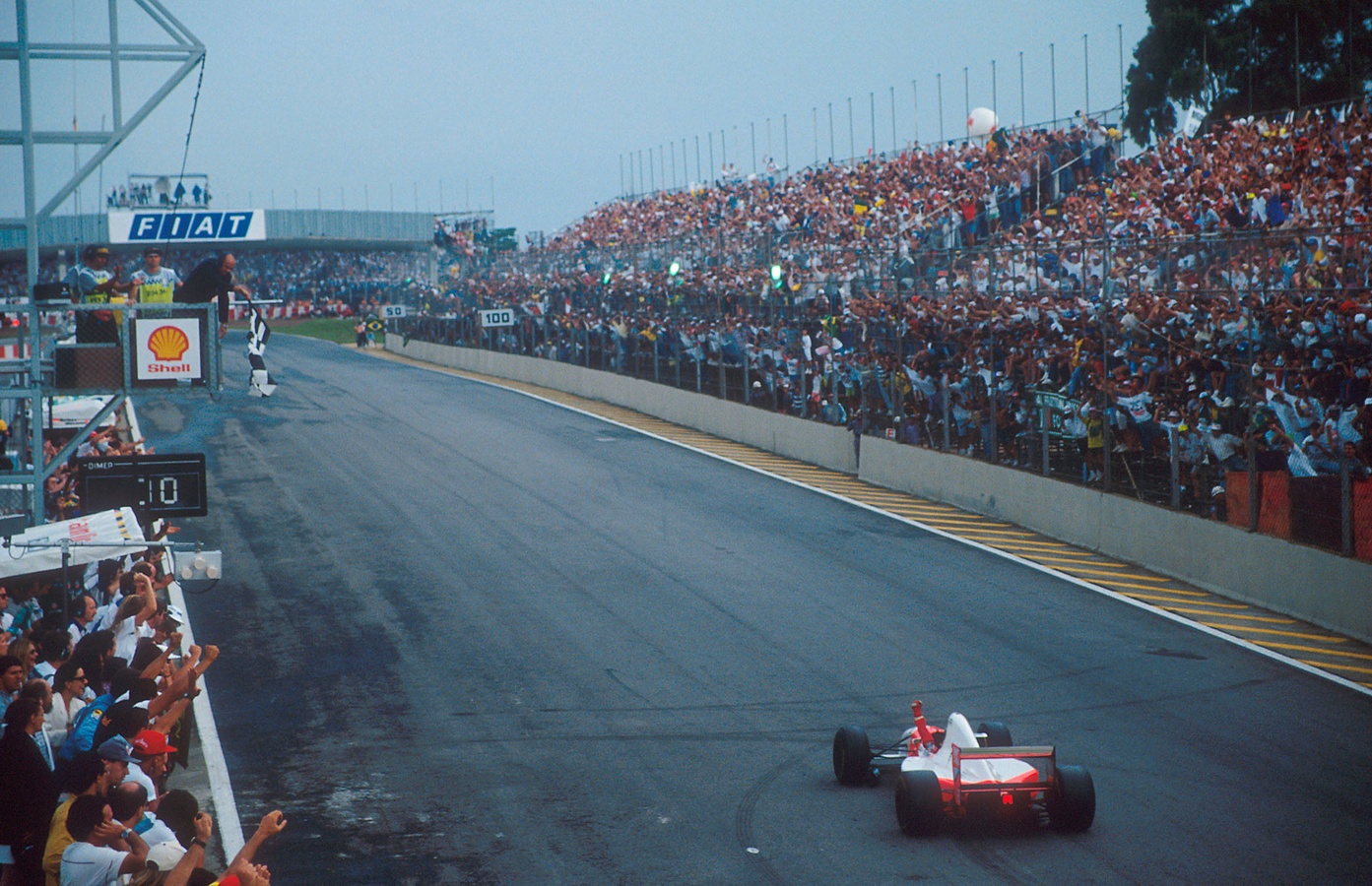 Then, the rain came, and Alain retired from the lead having crashed into a spun car, prompting a Safety Car. Now in second behind Hill after Schumacher’s slow pitstop, Ayrton maintained his position as the track dried out, and after pitting for slicks showed his epic talent in the mixed conditions, overtaking Hill for the lead and pulling away before crossing the line to take a stunning victory in front of his adoring public.

With two grands prix in Germany, the race at the Nürburgring took on the moniker of “European Grand Prix”, and the race began under dark, threatening clouds. By the end of lap two, the whole field had already pitted for wet tyres, and pandemonium ensued, with multiple crashes that led to red flags stopping the race due to the undriveable conditions. 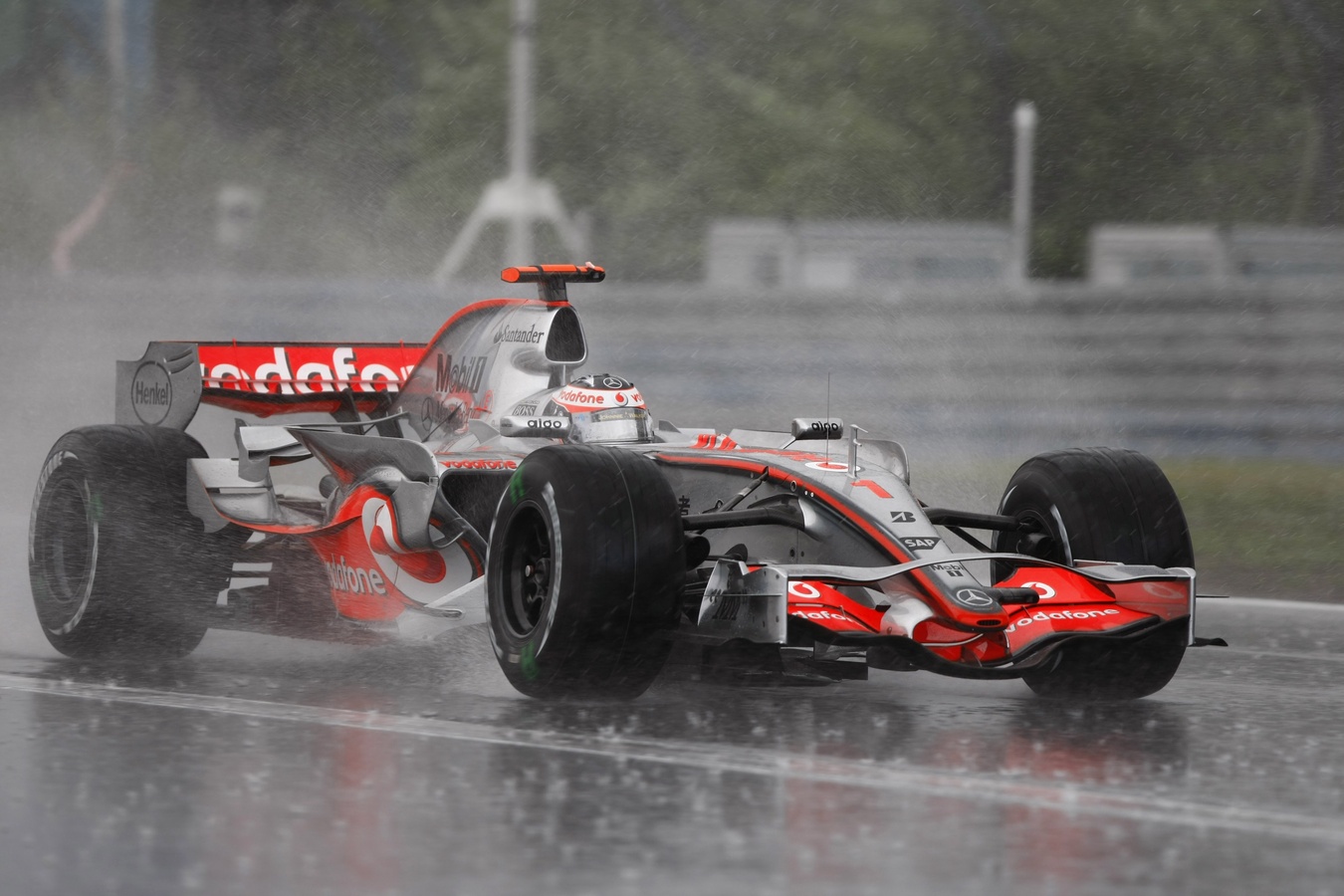 After 22 minutes the action resumed under the Safety Car, and the track began to dry out. After another pitstop for dry tyres, Felipe Massa emerged as leader, with Fernando Alonso right on his tail in his McLaren. The Brazilian began to pull clear, and Fernando made his final stop on lap 37. By lap 53, the rain was thundering down again. Massa pitted from the lead with a four-second advantage, but Fernando made up the deficit and by lap 56, four from the end, he was within touching distance –

Fernando attempted to overtake and the pair banged wheels as he made his way past. He took the lead, and maintained it through to the chequered flag to take a thrilling victory. 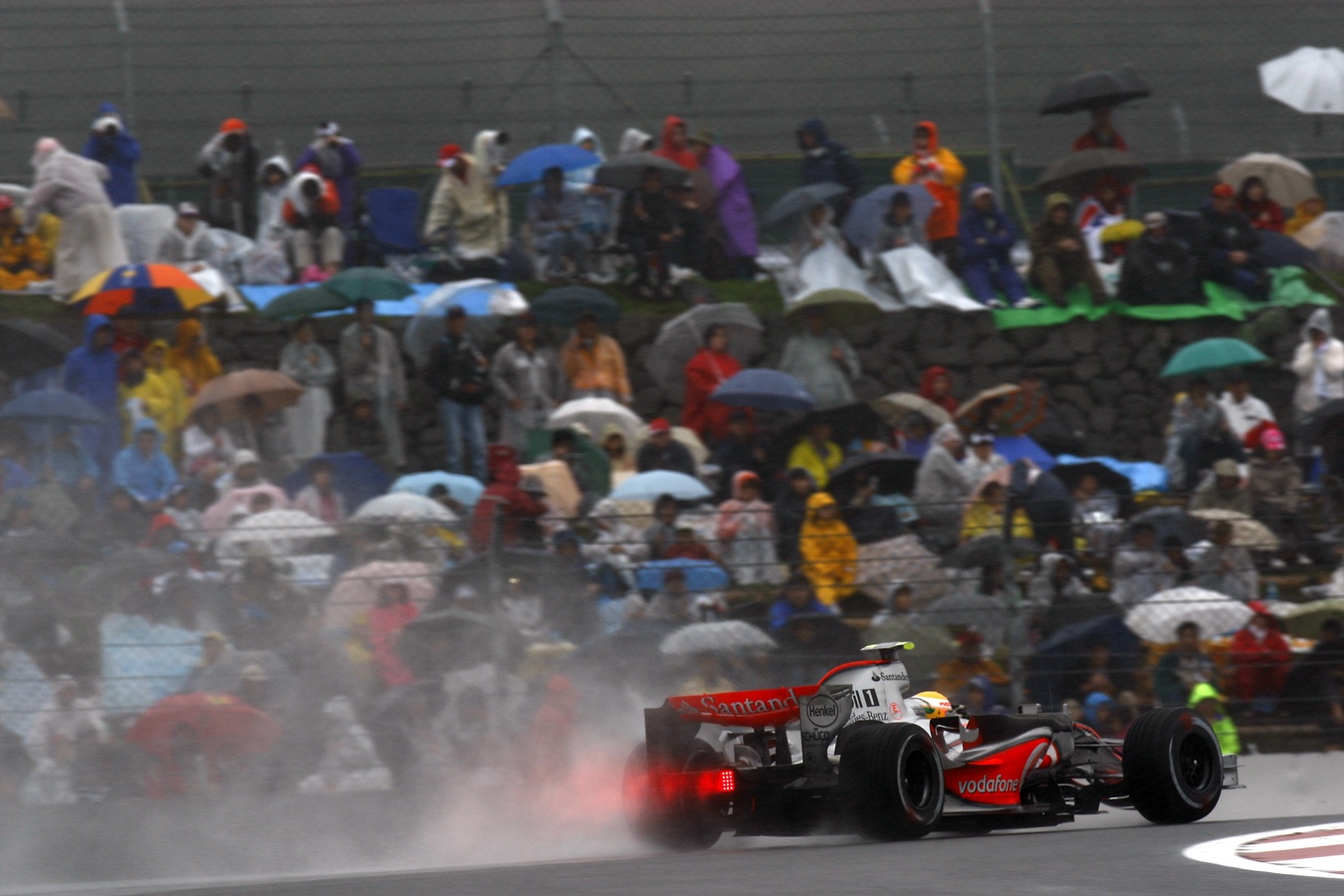 This was one of those races that everyone just knew would be full of drama, as torrential rainfall meant the field started behind the Safety Car, which led for the first 19 laps. Lewis Hamilton started ahead of team-mate Fernando Alonso, and they led the pack as the Safety Car pitted. Later, Fernando aquaplaned off the circuit and retired from the race, which brought out another Safety Car. While it was out, just behind Lewis Vettel in third place crashed into Webber in second place, causing both to retire, but Lewis continued undeterred to win a rain-soaked and intense Japanese Grand Prix.

Heavy morning rain meant the 2008 British Grand Prix began on a wet track, although the deluge had stopped, allowing the field to start on intermediate tyres. Lewis Hamilton started in fourth behind his team-mate Heikki Kovalainen, Mark Webber and Kimi Räikkönen, who all struggled for grip at the start, allowing Lewis to edge in front into the first corner.

Kovalainen had a better line, however, and retook the position, although many drivers struggled and spun on the standing water during the opening lap. Lewis shadowed his opposite number closely, managing to secure the lead on lap five going into Stowe. After a strong first stint, the track began to dry, which allowed a chasing Kimi (Heikki had spun) to pull back the gap, which was down to less than a second by lap 21 and the pitstops. 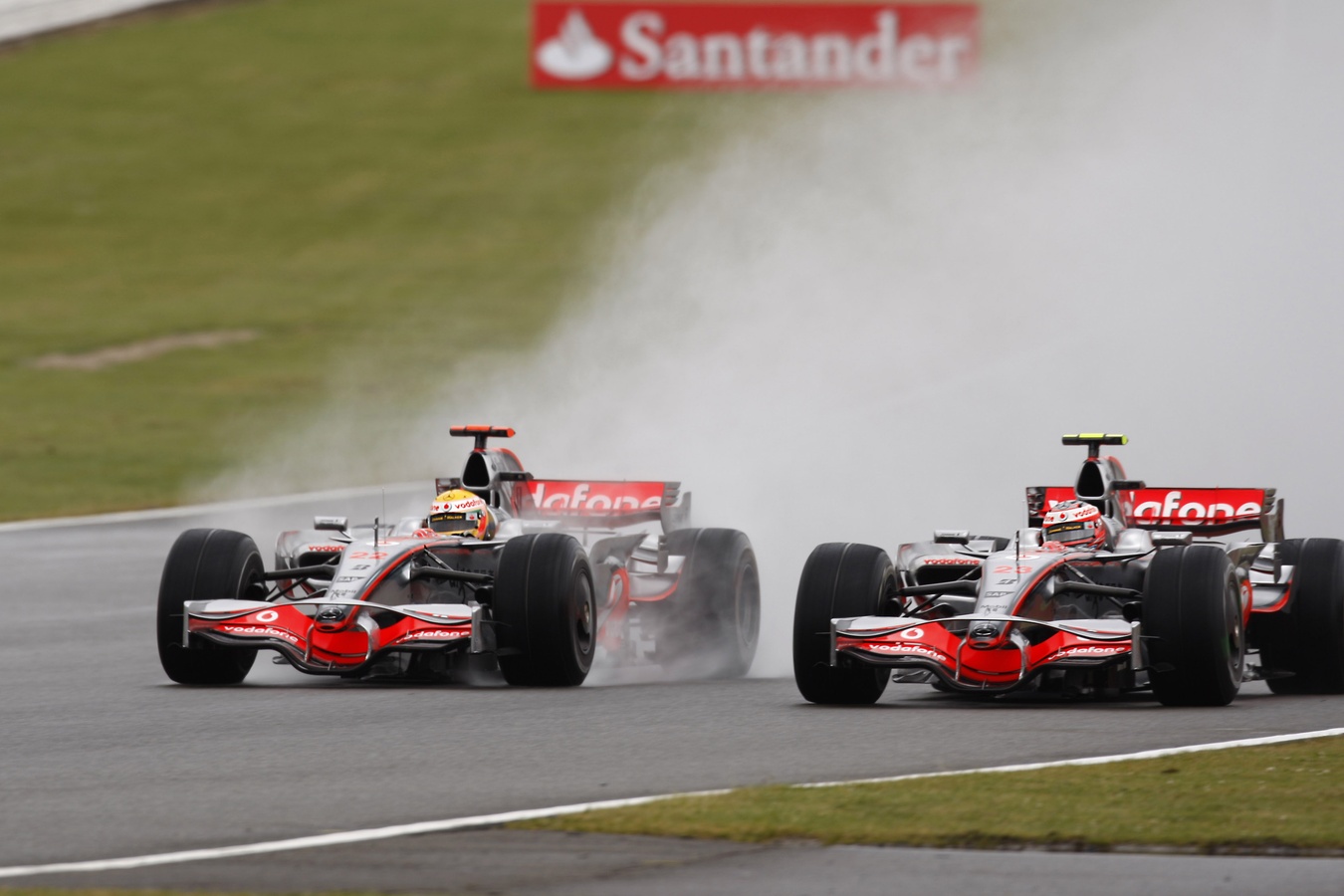 The team gave Lewis a fresh set of intermediates, which proved to be the perfect gamble as the torrential rain came again, making visibility almost impossible. The conditions affected the entire field, with cars spinning, re-joining, crashing and sliding all over the track. By lap 38, Lewis was leading by 30 seconds, and pitted again as the rain finally started to ease.

More chaos ensued as drivers struggled with the changing conditions on different parts of the circuit. But Lewis kept his cool, his head down, and crossed the line in front of his adoring home crowd on lap 60 to win the race by 68 seconds from Nick Heidfeld in second – the biggest margin of victory since the 1995 Australian Grand Prix. Lewis called it “by far the best victory I’ve ever had.”

The race started on a sodden track after heavy rain on Sunday morning. Lewis Hamilton started in third, behind the Ferraris of Felipe Massa and Kimi Räikkönen. Massa held his lead into the first corner at Sainte Devote, while behind him Lewis squeezed past Kimi down the inside to take second.

The thick spray made following cars around the notoriously narrow and trick circuit almost impossible, and Lewis made contact with the barriers on lap six, causing him to dive into the pits for a fresh set of tyres. The McLaren mechanics fuelled him heavy for a longer stint, and he re-joined in fifth, and a Safety Car on lap eight helped to reduce the gap to the leading pack. On lap 33, after cars in front had swapped positions, slid off the track, re-joined, and made their scheduled pit stops, Lewis took the lead. By his next stop on lap 57, Lewis has extended his lead over Massa by such a margin that even after pitting, he was able to re-join with a 13-second lead. 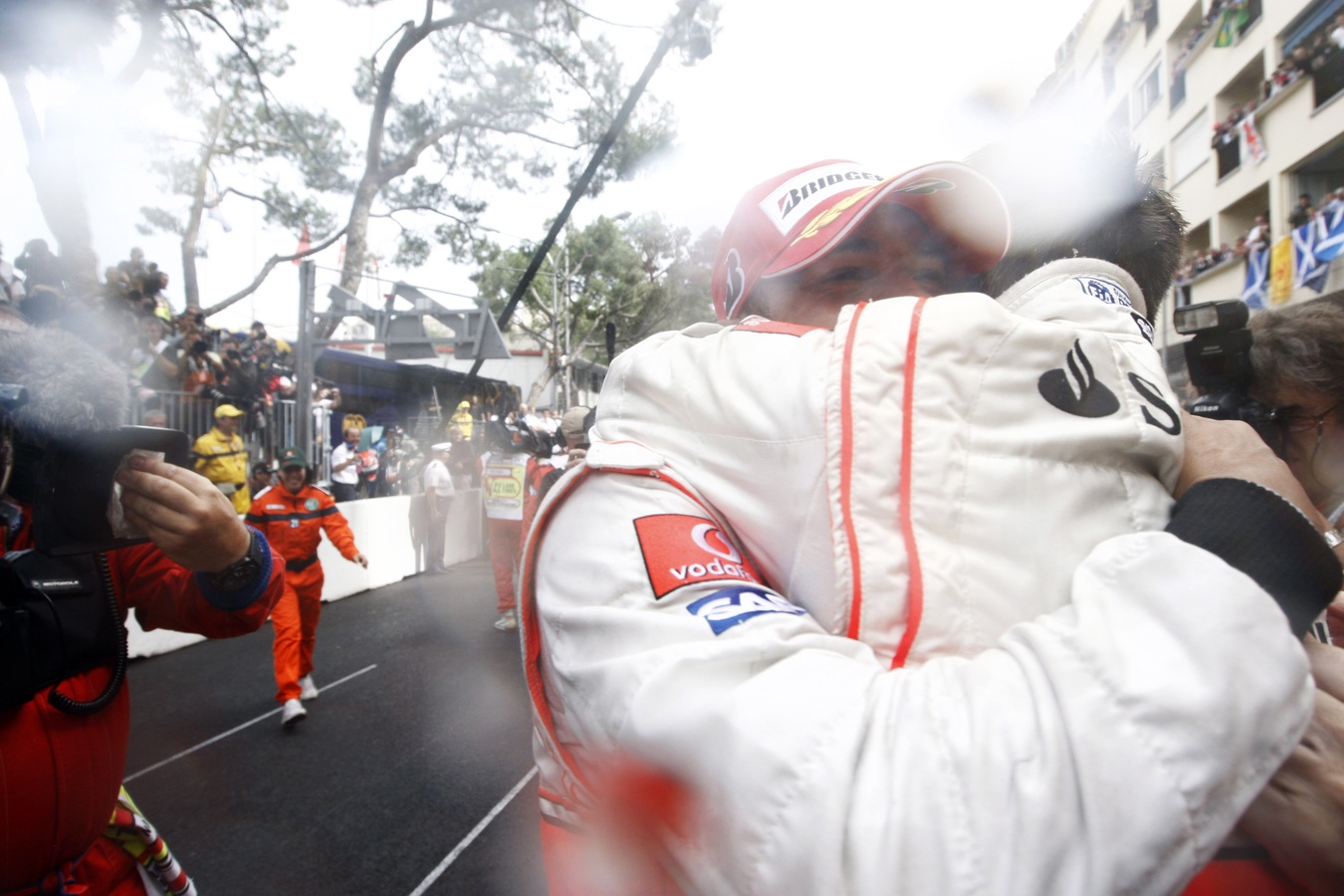 Another Safety Car on lap 62 closed the pack up once again and eradicated Lewis’ hard work, but he held tight and maintained his lead. Thanks to the slow, rain-affected first few laps, after two hours - 76 laps instead of the scheduled 78, the race was stopped. Despite a slow puncture on the final lap, Lewis crossed the line to take an emotional first victory in Monaco, and join the list of legends to win on this incredible circuit.

Jenson Button started the Chinese Grand Prix in fifth place, ahead of team-mate Lewis Hamilton. The race began in light rain, and the field was split into those who had taken cautious strategies, and those gambling on wet weather set-ups in anticipation of heavier rain.

A chaotic first lap ensued which lead to a Safety Car, and the majority of the teams opted to pit their drivers for intermediate tyres as the rain continued to fall. Nico Rosberg, Jenson, Robert Kubica and Vitaly Petrov were the only drivers to stay out, and they took the first four positions on track. 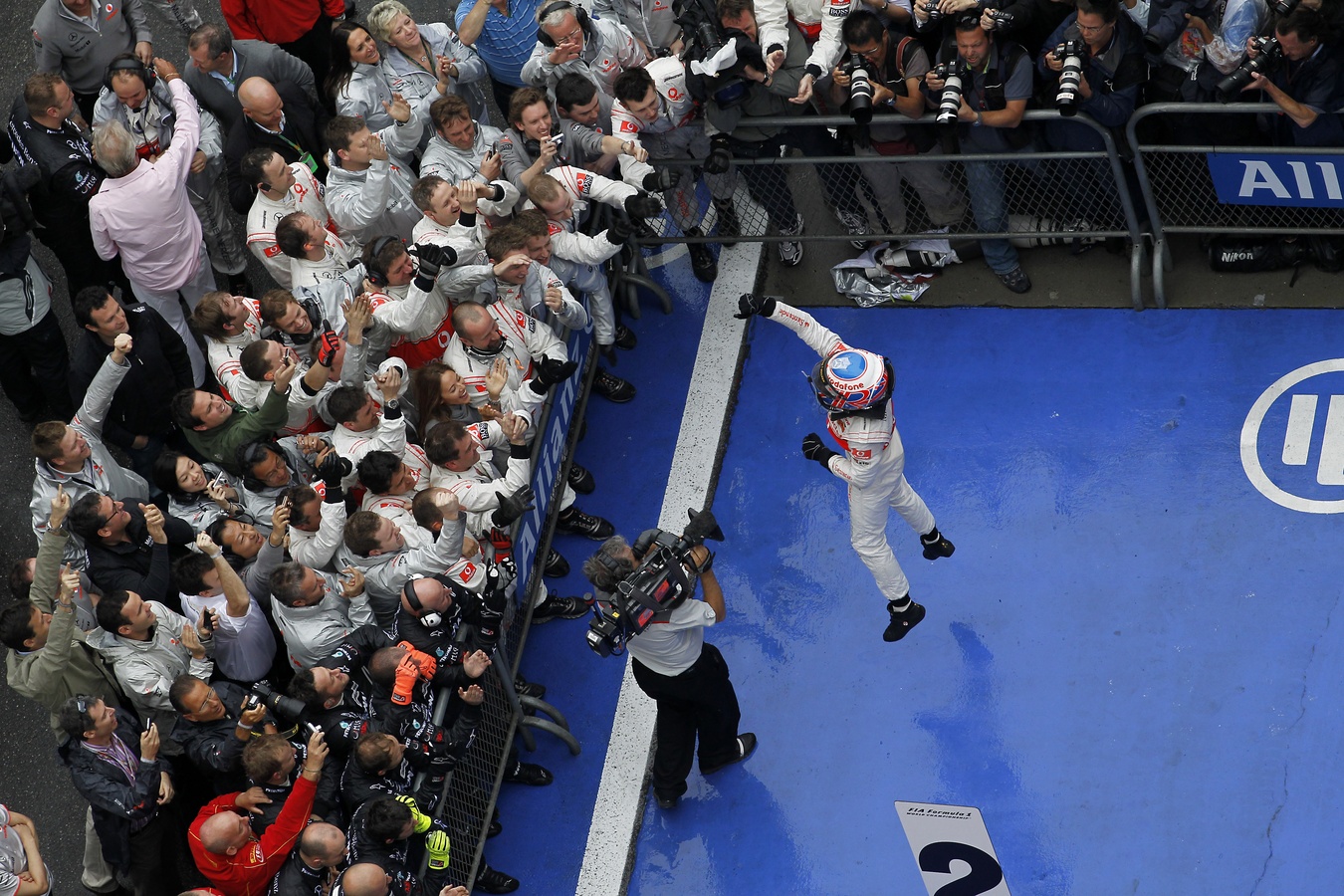 The gamble paid off as the track slowly began to dry, and many had to pit again a few laps later, leaving the top four stretching out a huge gap to the rest of the pack. On lap 19, Rosberg made a mistake on the back section of the circuit, and Jenson took advantage to steal the lead on the back straight.

The rain intensified in the final phase of the race, and Jenson showed his masterful talent in the wet by crossing the line to lead a stunning 1-2 for McLaren.

Easily one of the most enthralling wet races of all time, which set a record for the longest in Formula 1 history at four hours, four minutes, and 39 seconds, it was nothing short of extraordinary.

Jenson Button started in seventh position behind a Safety Car after the stewards deemed the track too wet due to deep standing water and heavy spray. Despite the low speeds, the whole field struggled for grip, but after five laps the Safety Car came in, leaving the pack alone to fight the conditions. Chaos ensued which brought multiple collisions, and Jenson found himself in sixth ahead of his team-mate Lewis Hamilton, who had run off the track. An attempted comeback ended in tears, as the pair collided and Lewis hit the pit wall, causing him to retire, and prompted a Safety Car. 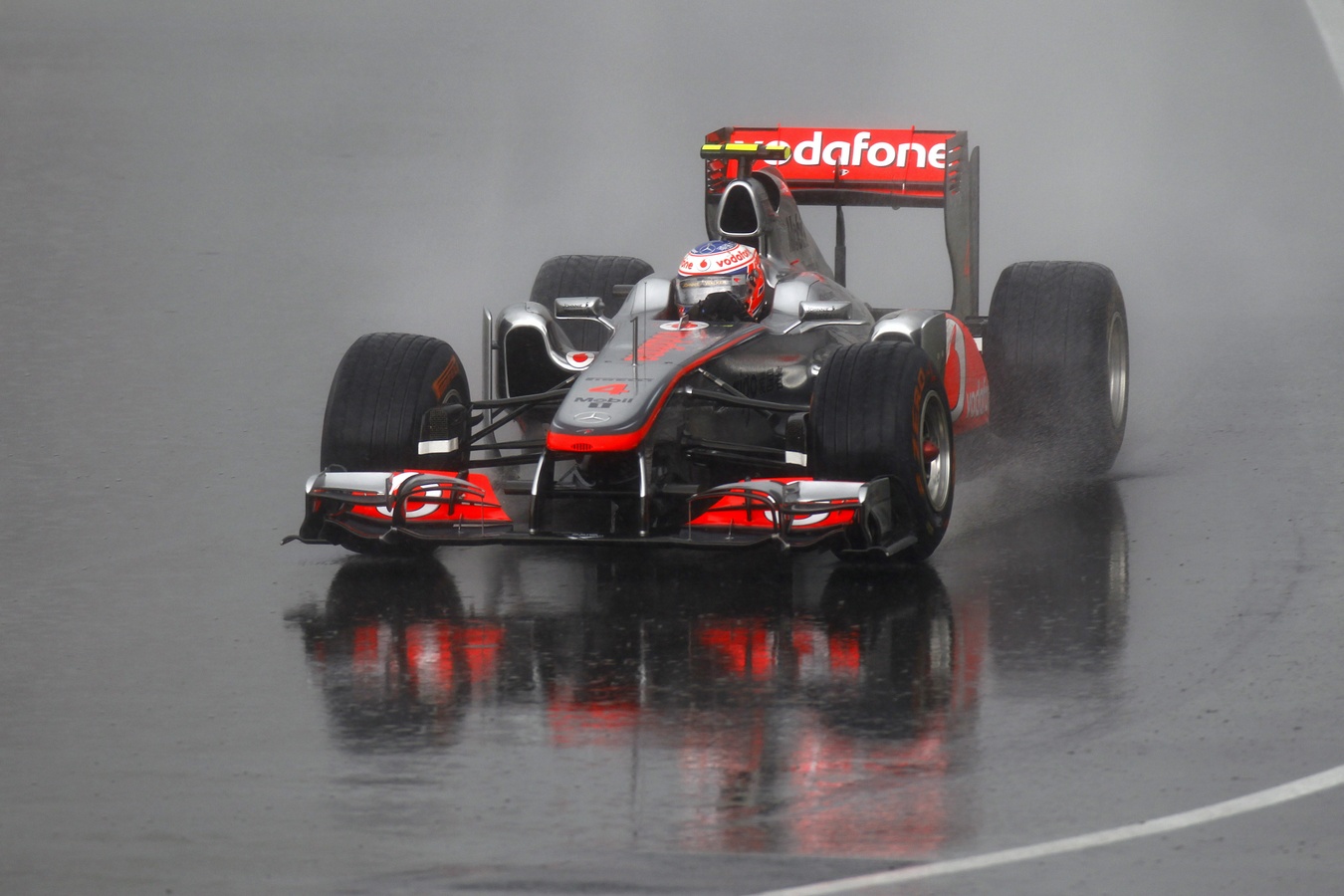 On lap 13, Jenson was given a drive-through penalty for speeding behind the Safety Car, leaving him trailing in 15th place. On lap 19, the Safety Car was deployed again as the rain intensified, and after six laps the track was deemed dangerous and the race was suspended. Over two hours later, once deemed safe enough to restart - albeit under another Safety Car - Jenson restarted in in 10th place. On lap 37, Jenson collided with Fernando Alonso after the Spaniard exited the pitlane, causing Fernando to spin, another Safety Car, and Jenson in dead last, in 21st position, with a puncture. Undeterred, he commenced the ultimate comeback.

By lap 46, he was in 10th after stunning moves on Maldonado and Alguersuari, and after a perfectly-timed pitstop had climbed to fourth, catching the leading trio of Sebastian Vettel, Michael Schumacher and Mark Webber. Another accident further down the field caused the sixth Safety Car of the race. The Safety Car came in nine laps from the end, and Jenson scythed past both Webber and Schumacher for second place, finally setting the lead in his sights.

The most nail-bitingly tense final laps ensued, as Jenson gained on race-leader Vettel lap after lap, setting the fastest time of the race on lap 69. On the final lap, Vettel led by just 0.9 seconds, before Jenson forced him into an error and he ran wide at turn six.

Hearts in mouths, Jenson took the lead, and held on for the remaining corners to take an utterly spectacular victory - one that JB described as the best of his career: five pit stops, a drive-through penalty and six Safety Cars.

The infamous #McLarenRainDance had well and truly paid off.