Our founder gives fascinating insight into the incomparable Denny Hulme

Our founder gives fascinating insight into the incomparable Denny Hulme

“His favourite expression ‘She’ll be right’ is pure Denis.” It was also the response often heard after a last-minute fix to the car before it went back out onto the track and invariably won the race.

Denny Hulme was known by his peers as a fearsome but popular competitor: strong and brave behind the wheel, shy and retiring away from it. He was a true gentleman racer and a key part of McLaren’s legacy in Formula 1 and Can-Am.

Here we delve into the archives to a profile of Denis ‘Denny’ Hulme, written by none other than his boss, fellow racer, New Zealander, and friend, Bruce McLaren. The article originally appeared in the November 25, 1967 edition of Motor magazine (at the princely sum of two shillings), and gives a fascinating insight into the man behind that steely, determined, and often stubborn exterior.

The World Champion I know

We were racing on the Ohakea airfield about 30 miles from nowhere in the North Island of New Zealand when I first heard of Denis Hulme. He was just some kid from Tauranga who was going to drive a 2-litre Cooper. He has only driven MGs before, and I can remember the mutterings that kids shouldn’t be allowed to drive these sort of cars. Denny has been playing havoc with the pundits ever since.

I’ve never asked him how he learned to drive, because I’m sure I know exactly how he started out. In time – a long time, I suppose – they will tar seal more than just the major roads in New Zealand, but until they do there will be a few dozen youngsters each year who learn to drive cars in conditions that will make them expert car handlers. These country roads have a layer of loose stones on top of a clay base, and even a fairly sedate family saloon gets quite lively on a twisting, narrow loose metal ‘shingle’ road. Not much of the countryside is flat in New Zealand, so any trip is liable to be a much bigger exercise than driving from London to Brighton, or from Los Angeles to San Francisco on the freeway. Motoring in New Zealand is still something of an adventure away from the main highways. There’s a chance that you’ll hold a bigger slide on your way to the beach than Jim Clark ever did while he was winning the British Grand Prix.

Denny must have made a good impression with his Coopers. The New Zealand Grand Prix Association’s ‘Driver to Europe’ scheme was in operations but they had one problem: young Hulme was doing very well for himself, but so was a lad from Whangarei, George Lawton, who also drove a 2-litre Cooper. They compromised wisely and sent them both abroad on the racing scholarship that had brought me to England a couple of years earlier. They arrived on the English scene in March, 1960, with Team Manager Feo Stanton, to go Formula 2 racing.

Feo’s job, apart from trying to keep them out of trouble, was to look after the cars, enter them in races, introduce the boys to race promoters, and generally show them off. They had only been in England a couple of days when they went to a cocktail party at the Savoy. There was just no way that two New Zealand country boys were going to have the poise and grace of a Lord Fauntleroy, but even allowing for that I wasn’t amused when a leading journalist – who shall be nameless – asked me: “Have your monkeys had their tails pulled yet?” I can think of a hundred replies now, but at the time I was stuck for an answer. I wonder if the scribe in question remembers the occasion in the light of one monkey’s future achievements? George was tragically killed when his Cooper flipped at the Danish Roskildering.

You would have to call Denny a relaxed sort of bloke. Big and strong, yes, but gentle and shy with it, and just a little suspicious of people. He likes getting the job done, whether putting a car together, making the fastest practice lap, or getting an interview over with. A clue that gives an insight into the Denny that doesn’t show is that he hates to waste a day; unless he accomplishes something he’s not happy. It’s a part of the drive that made him World Champion.

He has never been afraid of work, but he won’t overdo it if it’s not necessary. As I said before, he likes to get the job done – quickly. He did all the preparation on his own racing cars (before he was famous, that is!) and one thing he didn’t believe in then, and still doesn’t, goes under the heading of “Technical B.S.” and the people who purvey it. I could almost accuse him of being a bit crude, and I could get away with it because I’m a bit that way myself. His favourite expression “She’ll be right” is pure Denis.

He was putting his Formula Junior Cooper together in Surbiton once, and I mentioned to him that perhaps he should make proper brackets for the hoses. “Nah. I’ll tape 'em up. A bloke might want to take 'em off again. She’ll be right…”. 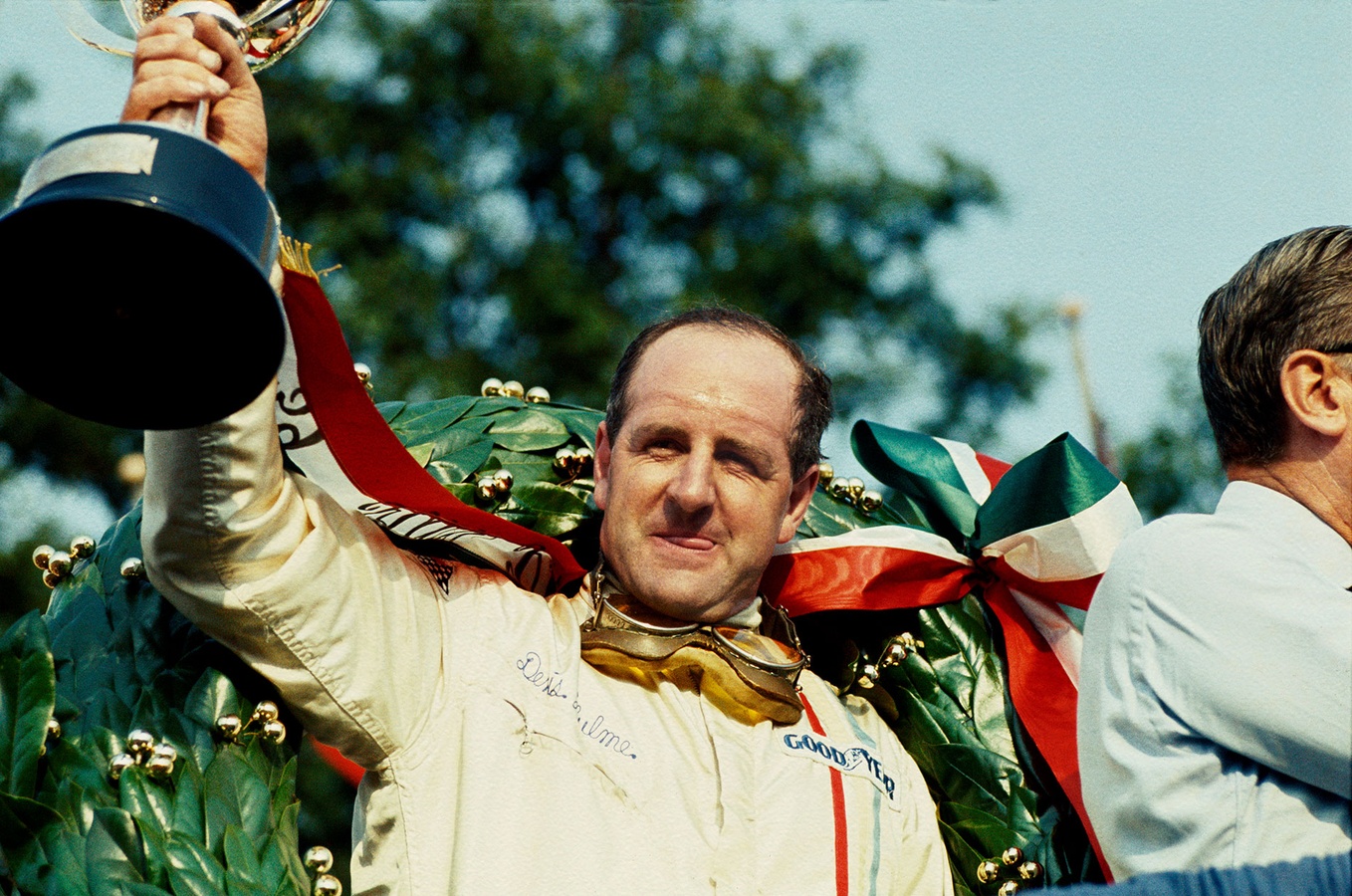 And a couple of years later at the Brabham factory Jack tells the story of the cars being prepared for Reims. Denny was working on the electrics of his Formula 2 car, and he had just twisted the wires together and taped them. Jack said: “You can’t do that! Put some proper connectors on it.” But “She’ll be right” won again. In the Formula 1 race one of Jack’s electrical connections came adrift when he was well placed, while I think Denny went on to win the Formula 2 race. Tape and all.

Denny Hulme has notched up a few records now, but there’s one that very few people know about. He has built a Formula 2 Cooper in record time. In 1960 they had pranged one of the cars and with a race the following weekend they set about building a new car. With Denny doing the welding and Feo and George cutting and filing the tubes they made a chassis in two and a half days! When I think of the complexities of current monocoque construction, those really were the good old days…

Denny is never too proud to lend a hand. On the Can-Am series we had only two working days between Bridgehampton and Mosport. The Bridgehampton track was particularly rough and the crew were going to need every bit of available time to check the two cars thoroughly. Denny’s car needed an engine change but he had a feeling (as he often does about some things) that either the heads or the manifold on his old engine were a bit special judging by the way it had run in the last two races. But to put those heads on the new engine required stripping, checking, re-lapping the valves and rebuilding. “I’ll grind the valves if that’s what you’re worried about. You get the engine apart and I’ll have them done while you’re talking about it!” He did too. It was an excellent job, even checking them with marking blue, and that engine won him the race. Everyone was happy. Denny had accomplished something that day, time was saved, and the job was done. I’ve tried to imagine a similar situation with, say, Ford’s racing operation – but it just couldn’t happen! 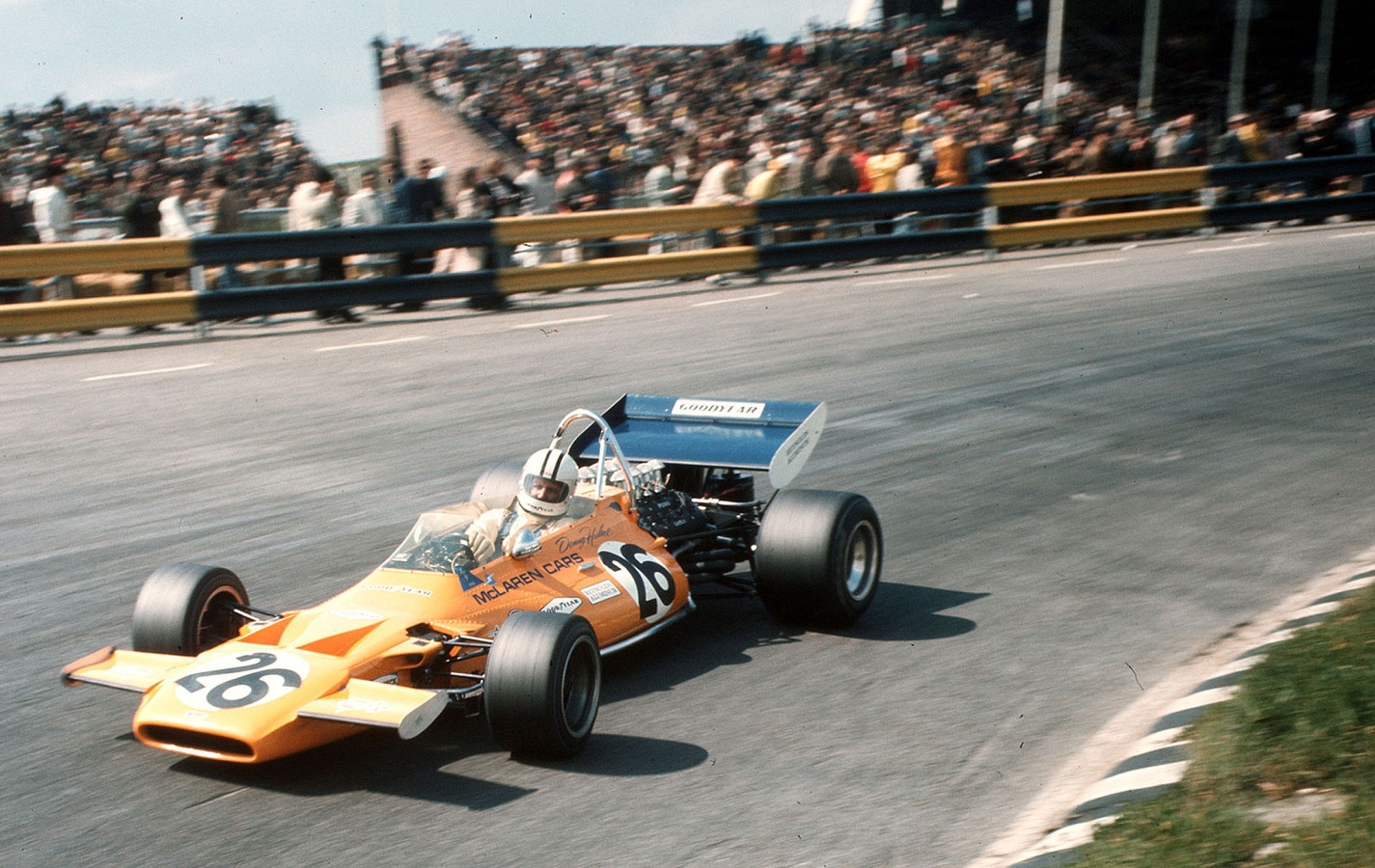 As a racing driver Denny becomes a slightly different person. He has always had a lot of natural ability and he doesn’t have to work at going fast. He picks up a new circuit very quickly. I think he has always had potential, and this is one of the rare times when Ken Tyrrell, the ace picker, was wrong. He didn’t think Denny would make it.

In the past two years, apart from getting better with every race and without hitting anything in the process, Denny has become more determined. He had a year when he couldn’t find anyone to give him a drive; he had to spend all his own money on his Cooper, and he worked in Jack Brabham’s garage servicing customer’s cars. Ken Tyrrell, to give him credit, has always said that a good hungry driver will beat a good fat one any day, so maybe this spell of ‘hard times’ was the best thing that could have happened to Denny. You wouldn’t call him brave, and you wouldn’t call him daring because he doesn’t do anything dangerous. He always has the situation under control. He can get very sideways on, but he takes one hand off the wheel, and with the other hand and brawny arm he can apply a bucketful of lock so fast that it would shock the front wheels right off some cars. He’s pretty hard on gear changes too!

He is a good man to have on a team from a mechanic’s point of view. He knows that he wants and how it should be done, because he’s done it all himself at some stage. He is easy on the car because he doesn’t wear it out with a lot of practice. 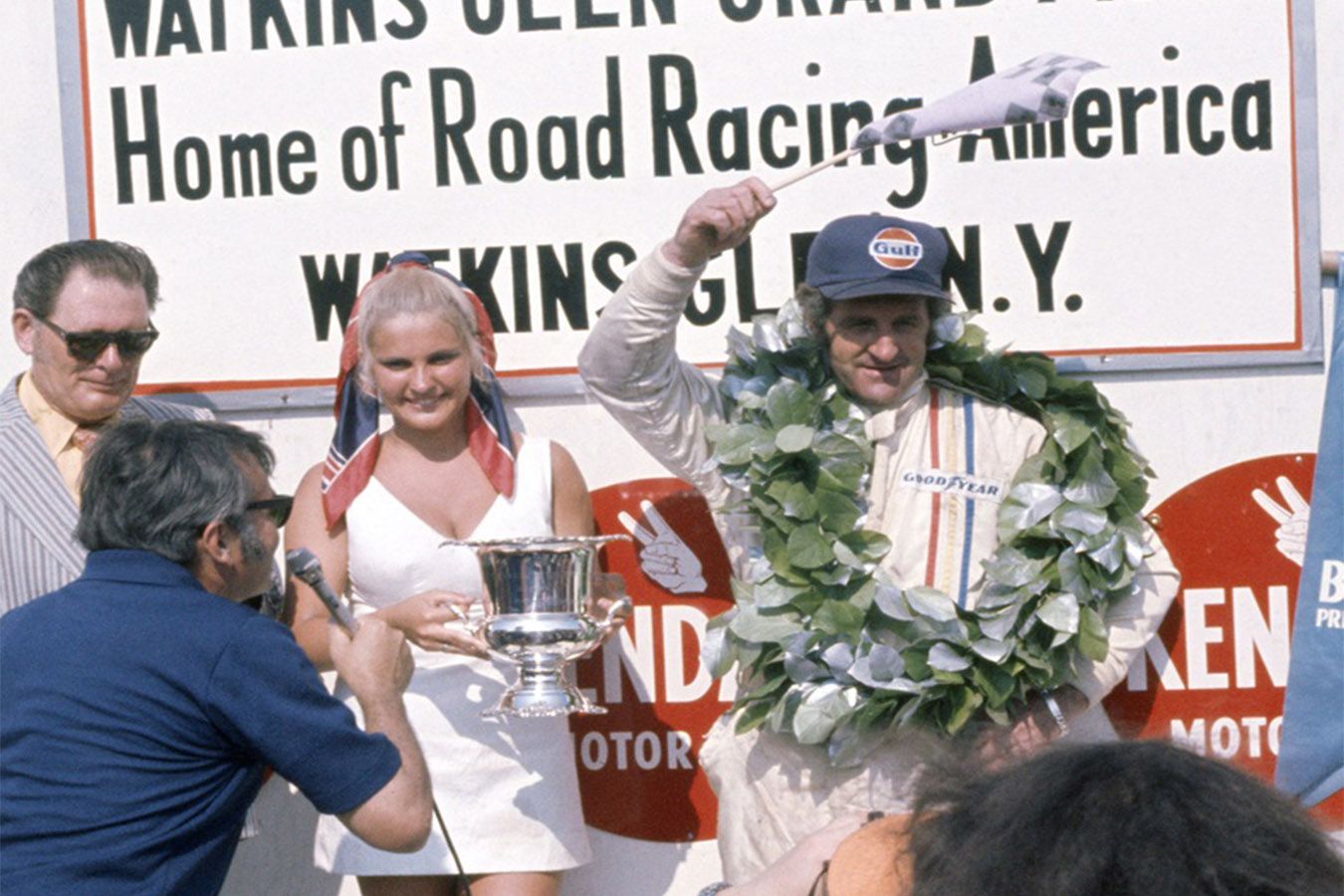 In the whole of the Can-Am series he has only ‘blown his cool’ once – at us, anyway. Minor officialdom, scrutineers and the few little jobsworths that you tend to come up against at motor races had better watch out for Denny, though. He objects strongly to red tape, or the wheels being pushed on his racing car by someone who probably doesn’t know anything about it.

Denny said he taught himself to go fast this year from the first lap on the track, due to the fact that at Indianapolis you have to qualify for the race in just four timed laps. It was in connection with this newly acquired ability that our ‘cool blowing’ incident occurred. At the start of the practice session at Bridgehampton he charged out, and it was three laps before the crew had got themselves sorted out, organised their tools and set up the original board. By the fourth lap he was back in the pits and taking his helmet off. “I’m wasting my bloody time! Why the hell weren’t you giving me lap times?” Now we give Mr Hulme signals every lap!

One thing has changed for Denny – there was a time when he had to chase people for a car to drive. Now they chase him.

Part One: Getting to know one of McLaren's original employees