Everything you need to know for the Miami Grand Prix

Everything you need to know for the Miami Grand Prix

Known for its white sandy beaches, vibrant art deco and glorious sunshine, Miami is set to become the 11th different US venue to host a Formula 1 race, although it’s unlike any of its predecessors.

The Miami International Autodrome poses all sort of difficult questions, which is often a great big signpost to an interesting race weekend. The track, which bends its way around the Hard Rock Stadium, past the cable car, through the tennis courts and quite literally heads for the highway, is very promising indeed. It’s not a street circuit, nor a permanent venue but a hybrid of the two: a temporary permanent (yes, we know) venue, aiming to combine the best of both worlds… and we’re really excited to be going.

“I’m really hyped for this weekend. New circuits are always something I look forward to, and when you add in the excitement around a US race, particularly in Miami, it’s going to be so cool. It’s looking fast with some great features and with the added element of being a street track, it’s going to be a fun challenge.

“I’m riding in on the high of the last race and hoping to keep the momentum going forward. Whilst the podium finish wasn’t exactly expected, it’s a testament to the hard work and determination of the team at track and back at the factory. Let’s keep going and push as hard as we can!”

“I’m buzzing to be heading to Miami! The US is like a second home to me, so I can’t wait to get on track in front of the fans and soak up the amazing atmosphere in the city. Miami knows how to put on a show so it’s shaping up to be an incredible weekend.

“I can’t wait for the challenge of a new track. The street circuit has some great features, and they're something I'm really looking forward to testing out. Last race was a very tough one for me after sustaining damage on the first lap, but I’m bouncing back stronger and I’m ready to go. We still have a lot of improvements to make to the car, but Lando’s result in Imola was very encouraging. Hopefully we can get another good result this weekend, let’s keep pushing!”

“Welcome to Miami! A new track always poses great opportunities, and the circuit looks like an exciting one. The temporary track seems to have a permanent feel, with some small undulations, fast pace and it has been designed with some good overtaking opportunities, enhanced further by these new regulation cars. New tracks also come with some challenges, such as lack of data, so we’re looking forward to getting out there and gathering these valuable insights. Whilst we still have a long way to go, we can continue to build on the good performances of the last few races.

“It’s great to see F1 become part of the city’s vast sporting legacy. Going to places such as this can only benefit our sport, so it’s great to be able to reach even more fans and continue to grow the papaya family stateside. The team always enjoy US races with their great atmosphere and brilliant fans. Let’s go racing!”

Well… this is the first Miami Grand Prix… does that count as a stat? Of course, being a brand new, straight-out-of-the-wrapper grand prix, statistics are a little thin on the ground. Fortunately, for these moments of numerical ennui, there’s an F1 crib sheet. The track is 5.41km in length, with a predicted lap time of 1m35s at a speed of 215km/h. In real terms that puts MIA in the middle of the F1 pack – in the Bahrain/Catalunya bracket. Top speed should be around 320km/h with 58 per cent of the lap at full throttle. There are 19 corners, eight right, 11 left – though Turns Nine and 10 are more curves along a straight rather than anything more demanding. The more… unique… stats we can throw at you are the provision of 31,000 parking spaces and 1,100 toilets. Also, that each of the 118 pit-wall barrier blocks weighs 6.5 tonnes, which is the same as the combined mass of the Miami Dolphins NFL squad.

Lewis Hamilton wins for McLaren at COTA in 2012 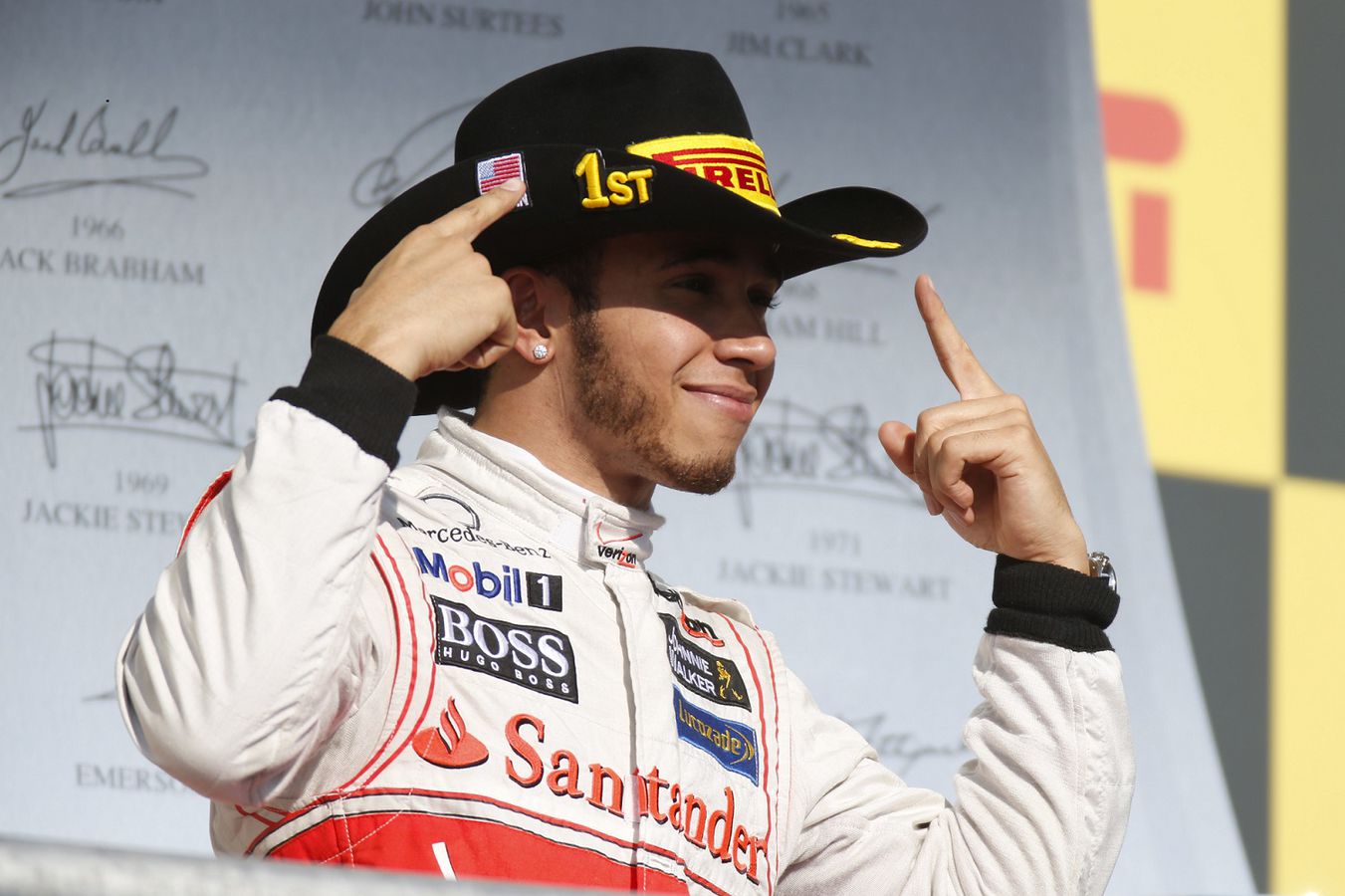 Lewis Hamilton wins for McLaren at COTA in 2012

It’s a new race, so anything could happen but we’re expecting the primary overtaking points to be at Turns One, 11 and 17. These are the corners at the ends of the three DRS zones. If you haven’t seen the track yet, think of it as a basically rectangular (it isn’t) with long straights on the top and the bottom. At the western end of the circuit, there’s lots of high-speed corners as the track works its way around the Hard Rock Stadium. At the Eastern End of the circuit, there’s lots of low-speed corners as the track climbs and drops around the various on- and off-ramps for the highway (aka Florida’s Turnpike). The expectation is that the fiddly bit under the Turnpike – Turns 11-16 will bunch the cars, making the 1.3km straight into the T17 hairpin the primary overtaking spot.

We’re also likely to see more tyre wear this weekend than we have at the last couple of races, with the front-right taking a battering through the high-speed and the front-left levelling down through the low-speed, so expect the strategists to bestride the Earth this weekend like the magical maths mystics they most surely are.

Cue up the Jan Hammer theme music ‘cos this weekend the only thing to be seen in is the limited edition McLaren Miami Collection. This is a full range for adults and children, from tees, hoodies and sunglasses. Alongside black and white, we’re working from the South Beach art deco pastel palette this week with vice blue, beetroot purple, crystal rose and, of course, for the Miami traditionalists, aqua sky…

Did you know McLaren Plus is the most inclusive, rewarding and accessible fan programme anywhere in Formula 1? It’s entirely free and signing up is easy. Become a McLaren Plus member and you’ll receive unparalleled access to the team and a constantly updated stream of giveaways and exclusives. We’re competition-central this weekend having already given away a limited edition 2022 Miami GP Helmet, signed by Lando and Daniel – next up, if hanging art on the wall is more your thing, we’ve snaffled some of the stunning, Miami Grand Prix posters, and then had the boys add an autograph. Sign up to McLaren Plus via the form below to be the first to hear about how to enter.

Get the inside scoop on the Miami International Autodrome

Get kitted out in our must-have Miami merch