In the next instalment of McLaren & Me, we catch up with former McLaren driver, Stefan Johansson, for an exclusive insight into his time at McLaren. The record books show that Johansson enjoyed just one season as a McLaren race driver in 1987. Partnering Alain Prost, the Swede logged five podium finishes before making way for Ayrton Senna. However, his association with Ron Dennis started a lot earlier, and his good relationship with the team saw him engaged as as test driver in 1990.

I first worked with Ron Dennis at Project 4 in British F3 in 1980. Ron was impressive even then. He was always moving the goalposts and raising the standards for everybody in whatever series he was competing in.

We won the championship, but it was tight. We picked the wrong car at the beginning of the year. We went with the March, and it wasn't a good car that season. It wasn't until we switched to the Ralt RT3 with five races to go that things started to happen, and we eventually won the Championship by one point. I had to win and take pole in every race, which is what we did.

What became the McLaren MP4 F1 project was already under way that year. I was vaguely aware of what was going on, but it was only later in the year that it became clear. I remember in the factory we had this room we called the 'fish tank', with three guys sitting up there messing around with things that no one really knew about. That was John Barnard, Steve Nichols and Alan Jenkins, three of the best engineers in F1 history!

They were quite engaged even with what we were doing in F3. I remember John came to a couple of test sessions, and Alan and I became friends, and spent numerous dinners together. There was a strong support system there. 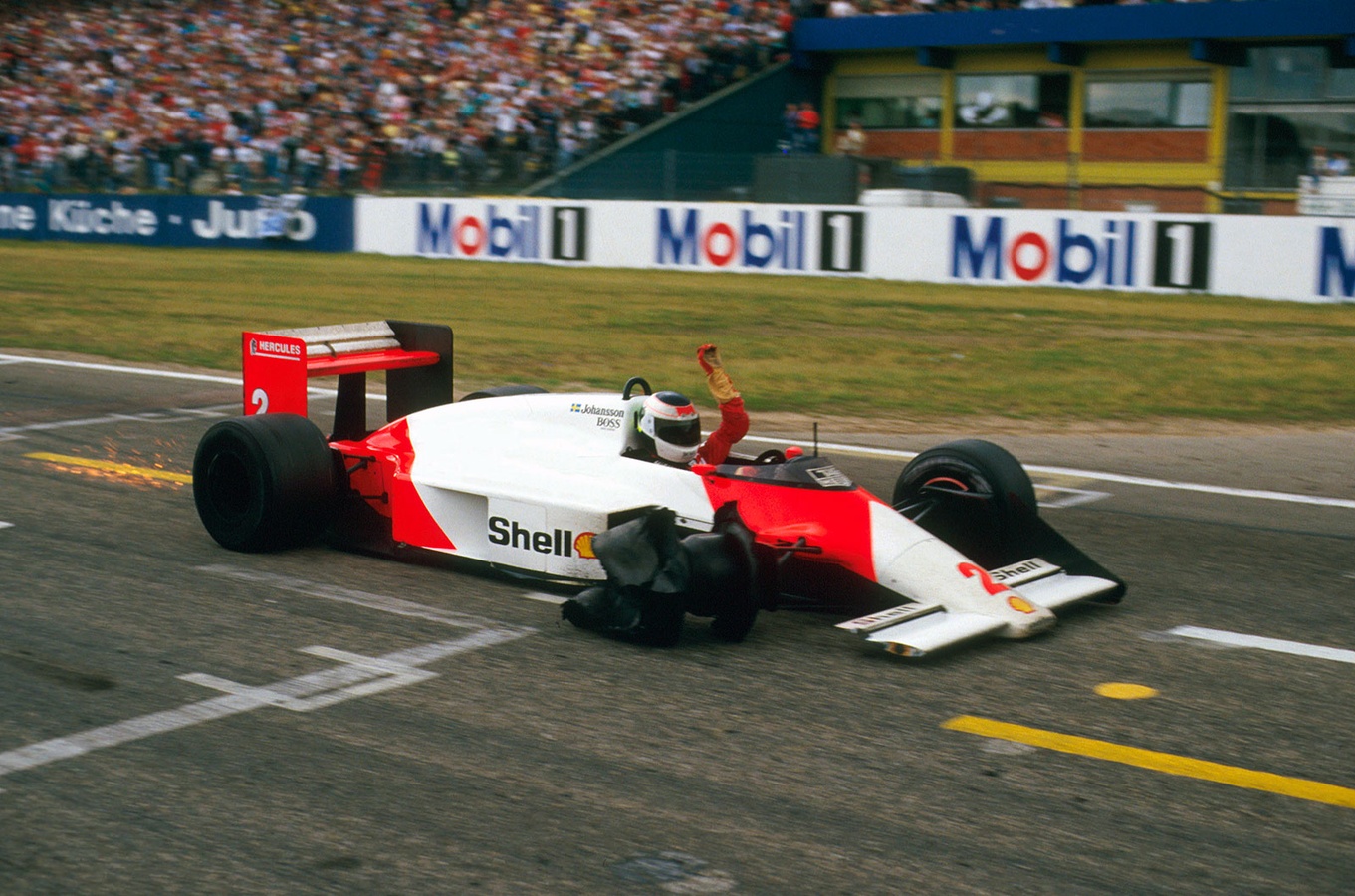 I was always aware that the chances of me getting into the F1 programme for 1981 were pretty slim at the time, coming straight from F3. Andrea de Cesaris was driving for Ron in F2, and we all know the backing he had from Marlboro, so to be honest it was something I never even thought about.

I did get to test the MP4/1 at Silverstone at the end of 1981, when I was doing F2. Again, there wasn't really an opportunity to race, it was more of a courtesy test that Marlboro did with a number of drivers. It was me, Thierry Boutsen, Tommy Byrne, and a few others. It was a PR exercise, but nevertheless at that stage of your career if you get an opportunity to drive an F1 car it's like a dream come true.

I always kept in contact with McLaren, and I had great relationships with everybody there, because a lot of people from Project 4 migrated onto McLaren. Ron and I always had a good relationship, and he was like a mentor in many ways. He took a great interest in what happened in my career. We talked a fair bit during 1986, when I was at Ferrari, and the opportunity developed for 1987. It came about organically, almost.

Ferrari was in a deep hole at the time. They were still at that point stuck in the old school philosophy of building race cars, and it was more about the engine than the chassis. At the time their wind tunnel work was very limited, certainly compared to what McLaren was doing. I knew through my friendship with Alan and John what they were up to, and they were way ahead of where Ferrari were at the time.

I knew that being Alain Prost's team mate would be a huge challenge, and I knew the conditions when I went there – I knew that Ron had been courting Ayrton Senna already. But I still felt it was a better opportunity. I understood it was going to be difficult, but you have to believe that you can get the job done.

McLaren were also miles ahead of anyone else with how the driver integrated with the team. Everything was laid on for you, every little detail was taken care of, which was so refreshing. When you went there for a seat fitting they had a room with a driver's suit in every size, and racing shoes in every size, and you just put your gear on and everything was prepared and ready to go. They really made the driver feel like he was the most important guy in the world, which obviously helps your confidence and how you feel about things. It was a great environment to work in.

As it turned out it was a classic case of bad timing on my part! The MP4/3 was the first car that was a not a consistent winner that they'd had for a while. The TAG engine was at the last legs of its development, and the car was very difficult to drive. Even Prost would tell you that. I was very nervous, and it was very difficult to get any confidence in the car, and to know where the limit was. With very little testing it was difficult to show up on the weekends and try and wring its neck, especially in qualifying. You just had no feel for the rear of the car at all. 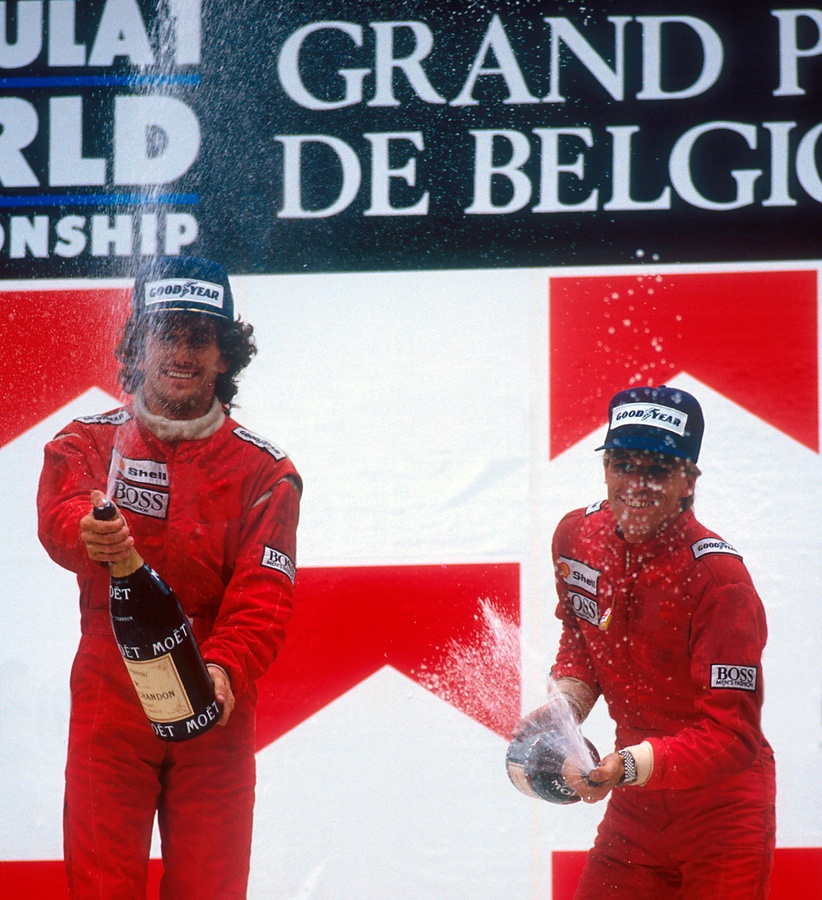 Some of the races weren't too bad, and we had some podiums – I was second in Belgium and in Germany, and I had a few third places. Spa was good, we were strong there, and finished one-two. I did the 'buddy' thing with Alain. His dash went down, so they ran off my car – I had to report back on the radio on fuel consumption and everything else. It was one of those races where if I hadn't played the game I would have had a chance to win, but hindsight is always 20:20!

The engine had a lot of reliability issues – I can remember the wastegate failing in Monaco – and  we had brake issues in Australia. Back then obviously none of the cars were nearly as reliable as they are at the moment. I finished sixth in the championship, and considering that Prost was fourth that year, it's a good indication of where the car was at.

The team announced at Monza that Ayrton and Honda were joining for 1988. Honda had already been with Williams for three or four years, so they were well on top of the programme at that point. It was clear that it was going to be a very strong package.

I knew pretty early on that the game was up. I think I did one test after the season had started, in a year old car, which obviously didn't help my cause at all. But that's F1. I was kind of aware of what might happen before I started, but like I said, it was a better opportunity than anything else available at the time.

I have to say that being team mates with Prost was kind of a revelation and a shock at the same time. He was just so good, particularly the way he managed the car, and managed the team around him, the way he dealt with the set-up and feedback. I learned more from him in one year than I did in my entire career. He was like a human computer, he was so good. I so wish we had the benefit of all the data that drivers have now, to figure out what he was doing that made him so good. All you had to rely on then was feel.

I honestly believe that Ayrton just raised his game massively by being around Prost as well. In 1988 it was tough to be driving the Ligier and watching McLaren win everything...

We always maintained a good relationship afterwards, and in 1990 I did some testing for McLaren and Honda at Suzuka. I helped to develop the paddle shift and a new gearbox and other bits and pieces. Tyler Alexander was running that programme at the time.

I have an incredible amount of respect and admiration for what Ron has done. We've kind of lost contact now, but I always felt that of all the team owners I drove for you had the feeling that he really cared, not only about what you did on a race track, but also on a more human level as well.

I've got nothing but good things to say about the whole experience. It was probably the most educational year, and I just wish I'd had that experience earlier on in my career and had that knowledge that I gained at McLaren.