10 things to know about Extreme E

10 things to know about Extreme E

Extreme E takes elements from many other motorsports and combines them in a competition that really isn’t like any other race series. The brainchild of the people behind Formula E, it takes some of the electric drivetrain technology from that series and shifts it off-road, visiting wildly diverse and remote locations, linked only by the desire of Extreme E to highlight the fragility of the environment and the challenges caused by climate change in the terrains in which it races. The format of the weekend combines rally, rally raid and rallycross and has attracted the biggest names from each of those disciplines. The racing teams are a mix of motorsport all-time-greats, and new outfits backed by some familiar names.

We may be one round into the second season of the series, but given the four-month gap between events, we figured you could do with a refresher ahead of Rounds 2 and 3, which are set to take place 6-7 July and 9-10 July at Sardinia, Italy. So, here are 10 things you need to know...

Extreme E has been launched with the intention of being a fully sustainable series from day one. The plan for Extreme E has been to minimise the footprint of the series, and then to offset anything that cannot be avoided – yet. The series was carbon neutral by the end of season 1.

Alongside the obvious highlight of racing with electric vehicles, the series doesn’t have fans (and thus the associated carbon costs of travel) on site, but instead engages through broadcast and social media. It travels via sea rather than air (more of that below). The vehicles are charged by hydrogen fuel cells, and the paddock uses a ‘second-life’ battery (formerly used in an electric bus) to maximise the use of renewable energy. To keep consumption down, the teams are capped at seven personnel: two drivers, one engineer and four mechanics.

After these measures, the series’ first season carbon footprint came in at 8,870t CO2e which was offset by investing in environmental certificates for a wind farm in Patagonia. 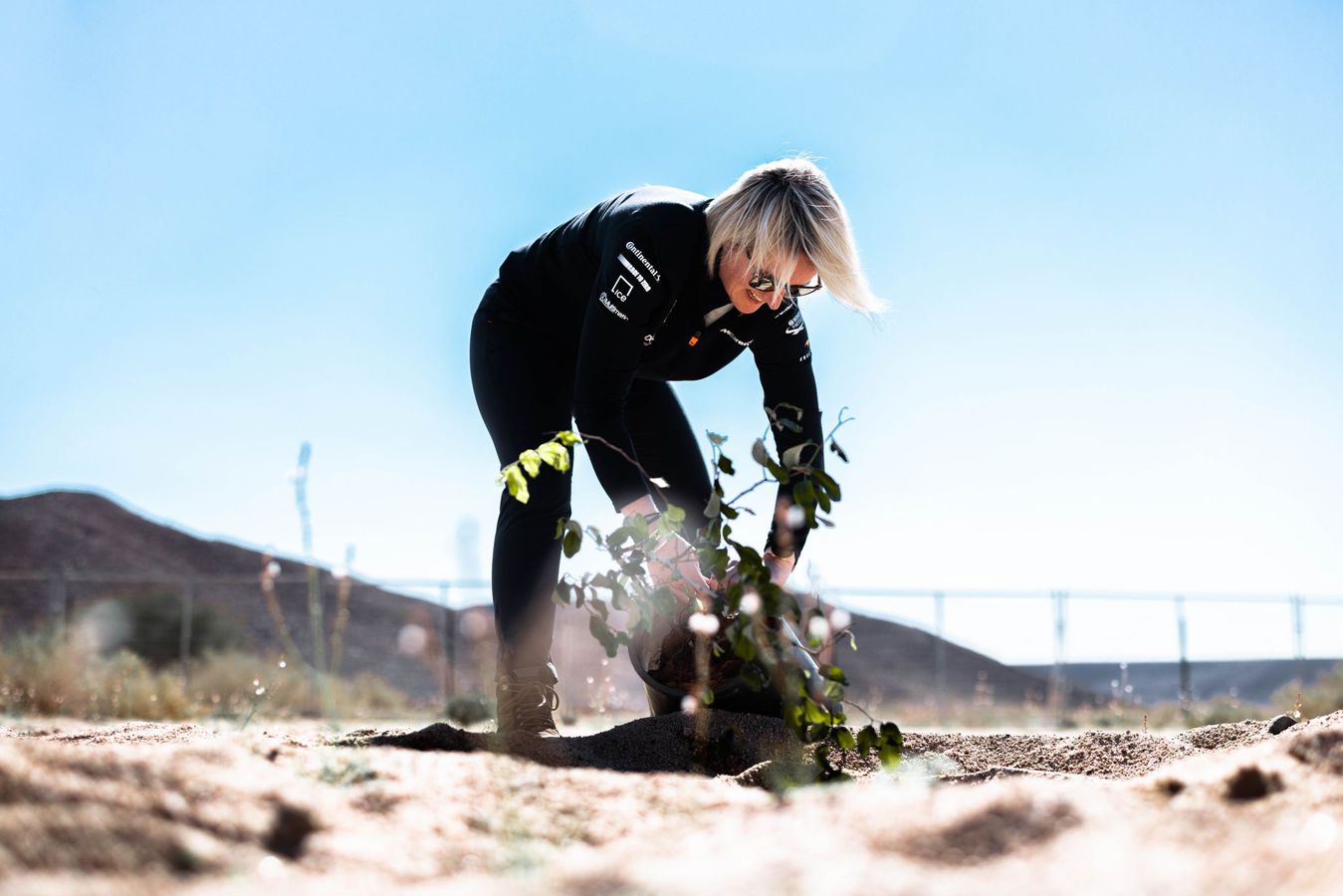 The Extreme E format requires each team to have two drivers, one male and one female, both of whom contest each race or qualifying heat, with an endurance-style driver switch in the middle (with a minimum switch time baked in for safety). Being a new series, there isn’t a defined path into XE but the format lends itself to attract drivers from across a range of disciplines, with rally, rallycross and rally raid specialists all appearing on the roster. Emma Gilmour and Tanner Foust are our drivers for the 2022 season, debuting as teammates in Round 1.

Emma is McLaren’s first female driver. The Kiwi from Dunedin is a rally winner in the ultra-competitive New Zealand Rally Championship and brings experience to our new team, having contested two rounds of last year’s inaugural XE Championship (standing in for Jamie Chadwick while the latter was racing in W Series).

In common with most motorsport series’, there is both a Drivers’ Championship and a Teams’ Championship. The rules in 2021 had the teams’ score being a straightforward points accumulation – but in the drivers’, only the best four results from the five events counted.

The 2022 season is McLaren's first in Extreme E 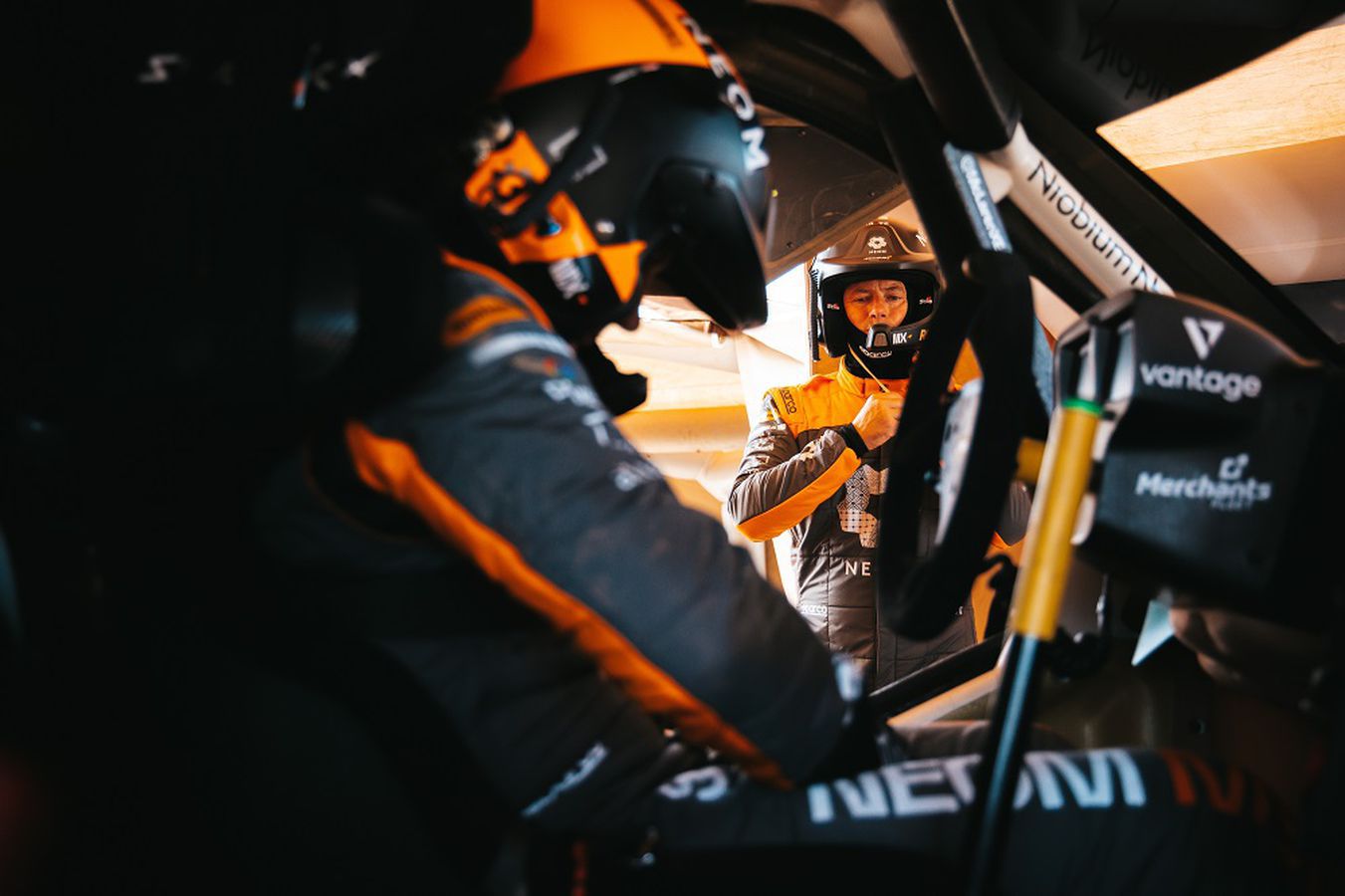 The 2022 season is McLaren's first in Extreme E

To support Emma and Tanner on track, we have a core team off of it.

Mark Grain is Sporting Director of the McLaren Extreme E Team, entrusted to oversee our debut season. Mark certainly isn’t a new team member – his career with McLaren Racing spans more than 25 years. With first taste of success in 1995 as part of the Le Mans-winning project team, he later transferred across to the team’s Formula 1 set-up. There he fulfilled several roles between 2001 and 2019, ranging from data engineer and R&D to Reliability Engineer and Assistant Chief Mechanic for the Race Team.

Leena Gade joins as Race Engineer on secondment from Multimatic, our vehicle dynamics partner. The British race engineer has a rich history in motorsport serving as a lead race engineer in the FIA World Endurance Championship and IndyCar series, most notably becoming the first female race engineer to win the 24 Hours of Le Mans in 2011. Teena Gade also forms part of the engineering team, with Teena most recently employed by Toro Rosso/AlphaTauri as a Vehicle Dynamics Engineer. She is contracted to McLaren Racing as Performance Engineer.

Extreme E is still a young series but many of the names involved in it have long-standing racing pedigree – and more than a few historic links to McLaren. The debut season last year featured teams ran by F1 World Champions Jenson Button (JBXE), Nico Rosberg (Rosberg X Racing) and Lewis Hamilton (Team X44); there was a joint entry by Andretti and United Autosports; Chip Ganassi and Abt fielded teams as did Carlos Sainz Sr, while the Veloce team was fronted by Adrian Newey and Jean-Eric Vergne. Button and Sainz both appeared behind the wheel, as did nine times WRC Champion Sébastien Loeb, WRX champion, Timmy Hansen, double DTM and WRX Champion Mattias Ekström, Dakar winner Jutta Kleinschmidt and Le Mans Series Winner Stéphane Sarrazin. With an inevitability a Hollywood script writer would be far too embarrassed to suggest, the championship turned into a battle between the Rosberg and Hamilton teams, with Nico’s outfit taking the title at the final round.

Over the last six decades, McLaren has contested many categories of racing, usually with a car designed and built in-house. Extreme E, however, uses a spec SUV car and the competitive exercise for our engineering team and garage crew is getting it set-up perfectly for conditions across a vastly different range of terrains and topographies.

The car is a fully electric SUV, weighing in at 1,780kg. It is 2.3m wide and capable of going from 0-100 km/h in under five seconds… barrelling up a 50° slope. The chassis, crash structure and roll cage are made from niobium-reinforced steel tube. The bodywork covering that is an aesthetic and marketing choice rather than performance-critical component, and so the teams can either run with series-standard bodywork or design their own. It’s powered by a 54 kWh battery, producing a maximum power output of 470 kW (630 hp). There is precisely one specification of tyre, supplied by Continental and designed to cope with mud, sand, ice… pretty much whatever the series throws at it.

…and it does throw things at it. While these cars are engineered to be robust, they take a real pounding, both from the environment in which they compete – but also from contesting every last inch of that environment with their fellow competitors. With only a very small team of mechanics on hand, and plenty of action over the weekend, the service park is a pretty busy place. 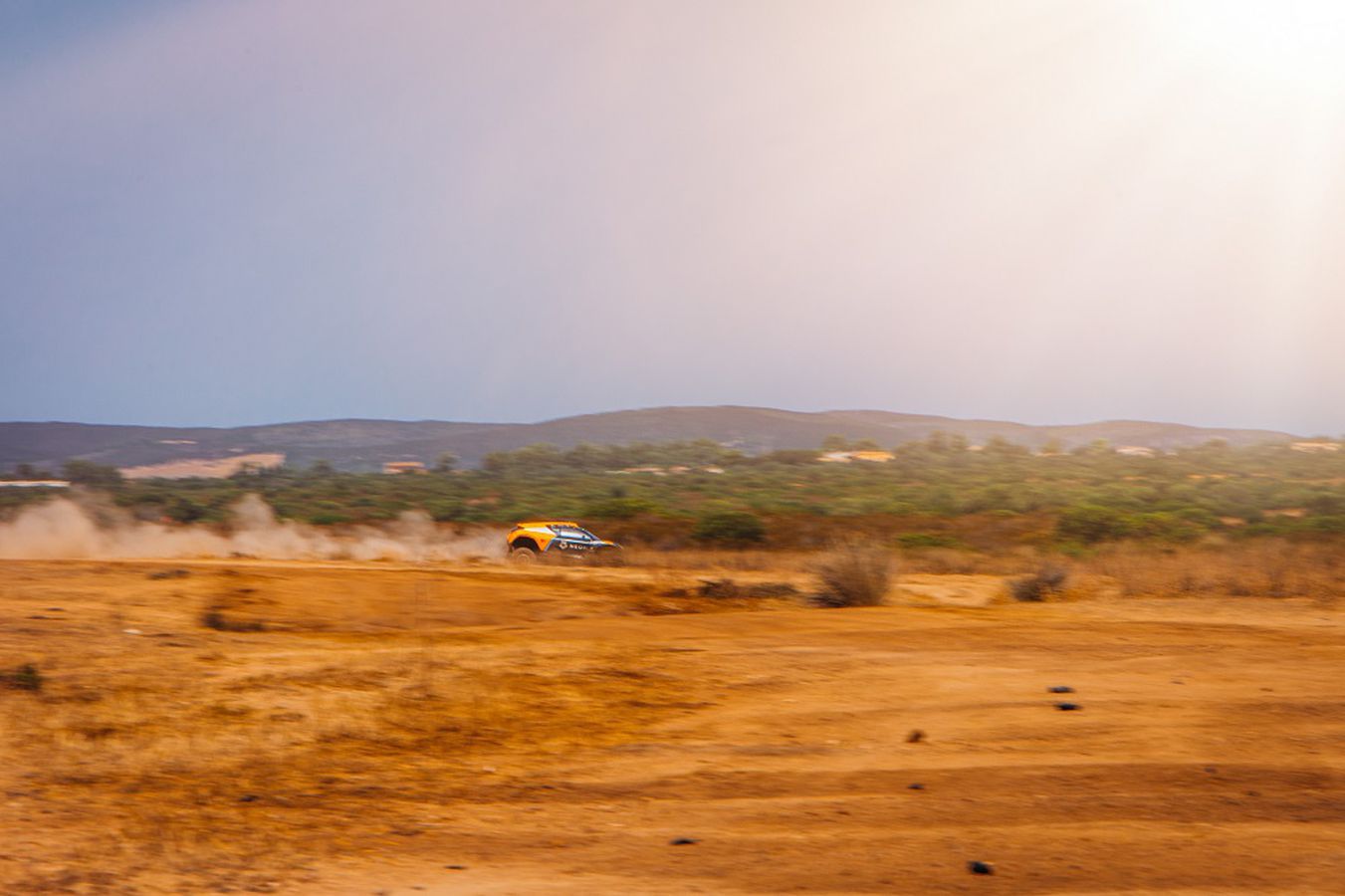 Following the Extreme E calendar requires a minor mental recalibration, stepping back in time to a slower, more sustainable pace governed not by airfreight timetables but by tide tables, with the series’ kit, cars and infrastructure transported by ship – specifically one ship: the St Helena, a former Royal Mail Ship launched in 1989 and now refitted to act as Extreme E’s ‘floating paddock’. The 6,700 tonne, 105m vessel has eight decks, and a crew of 50. She has been refitted to use the most sustainable marine engineering equipment and fuel, and now has an onboard lab, tasked to study climate science (it’s located in what used to be a swimming pool). The ship has 62 cabins, can sleep 175 people, and carry 90 20-foot shipping containers. It has two lounges, an 80-seat restaurant and a 100-seater exterior deck.

Extreme E has a two-day meeting, with qualifying taking place on Day One and racing on Day Two. Qualifying is in the form of time trials against the clock. There are two rounds, each team has to complete a two-laps (usually – but dependent on the length of the course) in each, with one lap driven by each driver with a switch in the middle of the run. Position on the time sheet for each heat is converted into points, and aggregate points across the two heats determines qualifying position. Championship points are then awarded based on this final qualifying position.

The format for Day Two will depend on the number of entries. In 2021, Day Two features two semi-finals, a ‘crazy race’ (that’s genuinely what it’s called) and the final. Semi-final #1 was contested by the teams qualifying first, fifth and sixth, semi-final two was contested by the teams qualifying second, third and fourth. These three-car races provided berths in the final for the top two cars across the line in each. The fifth spot in the final went to the winner of the crazy race.

The run order for qualifying is determined by lottery, though starting position in the final is determined by fan vote. The cars line up in a row, but the most popular teams get to pick their spot. Fans vote for their favourite driver, the two drivers in the team pool their votes, and the aggregate winner has first choice. Only the four teams coming through the semi-finals are eligible for these ‘GridPlay’ votes – though the teams that didn’t make the grade can ‘gift’ any votes cast for them to a rival team. 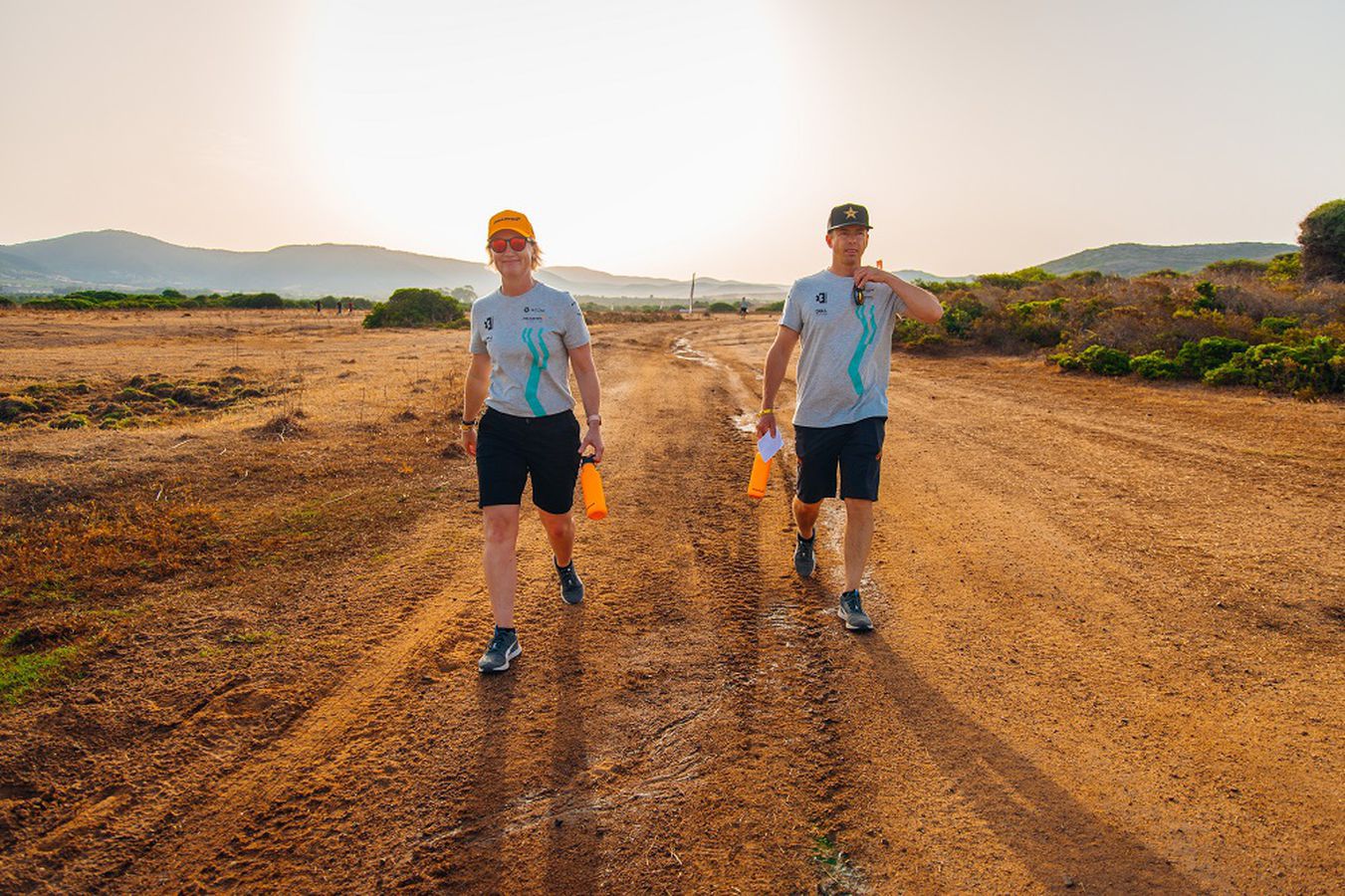 In addition to scoring championship points in qualifying and the race, there are bonus points available in the teams’ championship for being the fastest car through a designated ‘super section’ – aka the Continental Traction Challenge. Akin to a fastest lap prize, the best time through the super section can be recorded in any of the competitive runs. The cars also feature a ‘Hyperdrive’ boost, giving them extra power for a limited period of the lap. Tactically, this might be used in the super section in an attempt to capture that prize, or on a straight section of track where it will provide the maximum time advantage – or simply to attack or defend.

The second season of Extreme E features five events and began in February with the Desert X-Prix in Saudi Arabia. Next up is the upcoming Island X-Prix double-header in Sardinia, which takes place 6-7 July and 9-10 July.

The penultimate event will then take place in September with the Copper X-Prix in Antofagasta, Northern Chile, and the season finale will take place in November, with the Energy X-Prix at Punta del Este, Uruguay.

"We're itching to get going together as a team once more"