Going back in time is no mean feat. It’s fraught with danger. Just ask Marty McFly and “Doc” Brown for their cautionary tale about its perils. Nailing nostalgia requires walking a very fine line to ensure you don’t wind up creating a mediocre version of the era you’re paying homage to. Anyone who happens to have lived through the era immediately becomes an expert because, well, they were there.

To make 31 October 2019 authentically feel like 31 October 1999 across McLaren’s digital and social channels we had to litter them with nods to the nineties, as we celebrated Mika Häkkinen’s dramatic, second consecutive world title triumph. The question is, did you spot them all? For those who might have missed them – even despite eagle eyes – or those who are perhaps too young to remember, here’s a play-by-play of every reference that made our campaign feel oh so ’99...

Film rentals, giant camcorders, and the record button defined a generation. There was a time when pretty much anything and everything existed on VHS tapes. It meant waiting patiently while rewinding, or remembering a time code to fast forward to a specific scene. And then there was forever living in fear of the tape getting stuck in the machine – the nineties equivalent of ‘The Sword in the Stone’ – when the VCR would inexplicably refuse to relinquish the cassette.

There was no way our Mika ’99 campaign was going to leave this analogue wonder in the past, so you’ll have noticed a couple of our videos adopting the visual and audible cues synonymous with watching footage on a tape that’s whirring away in a VCR. 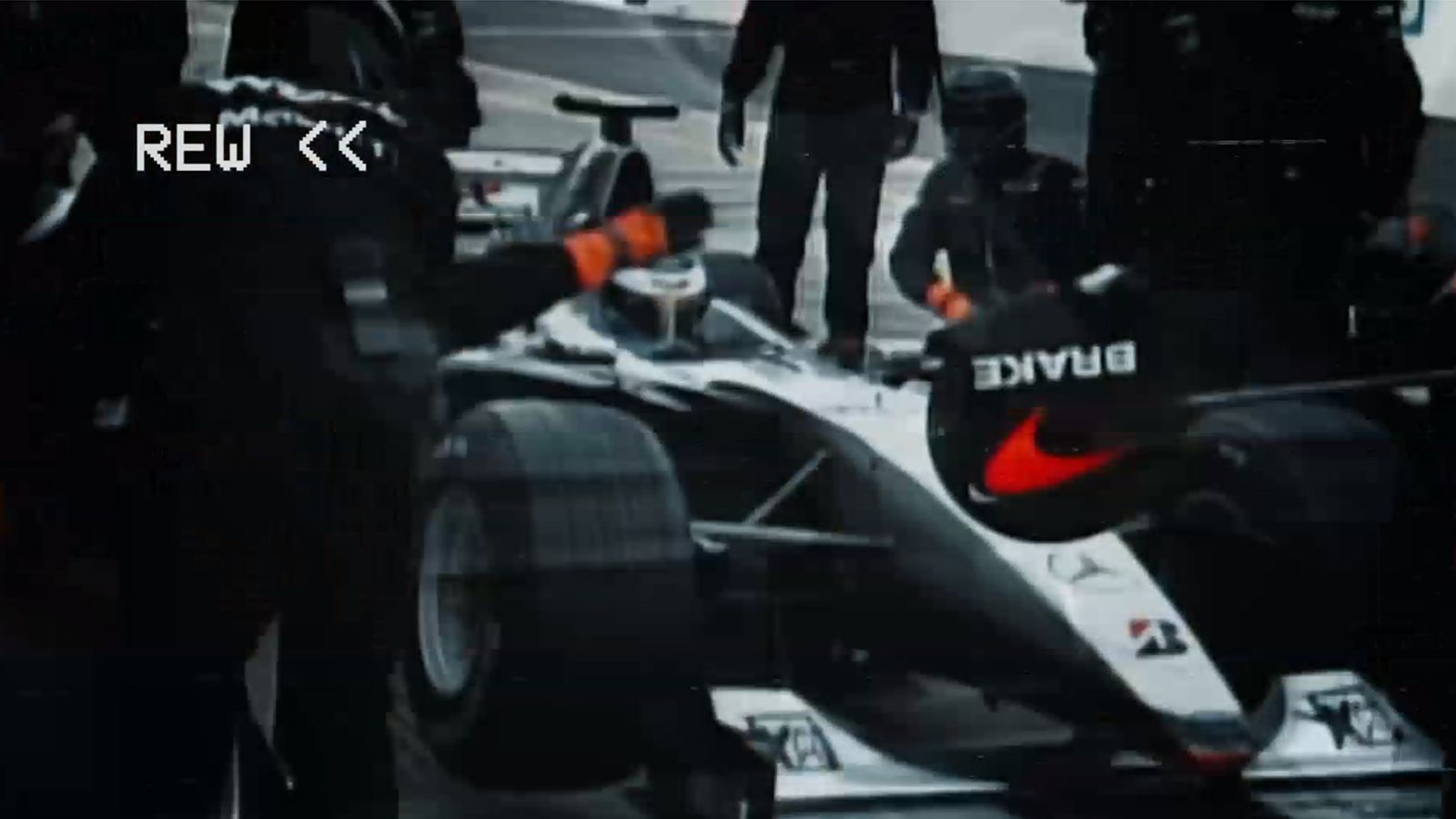 The psychedelic world of teletext was an indispensable source of the latest news and information in the nineties. From holidays and English Football League match reports to the F1 championship standings, text and rudimentary graphics made up of simple geometric shapes were used to great effect and never looked so good… or carried such significance and importance. 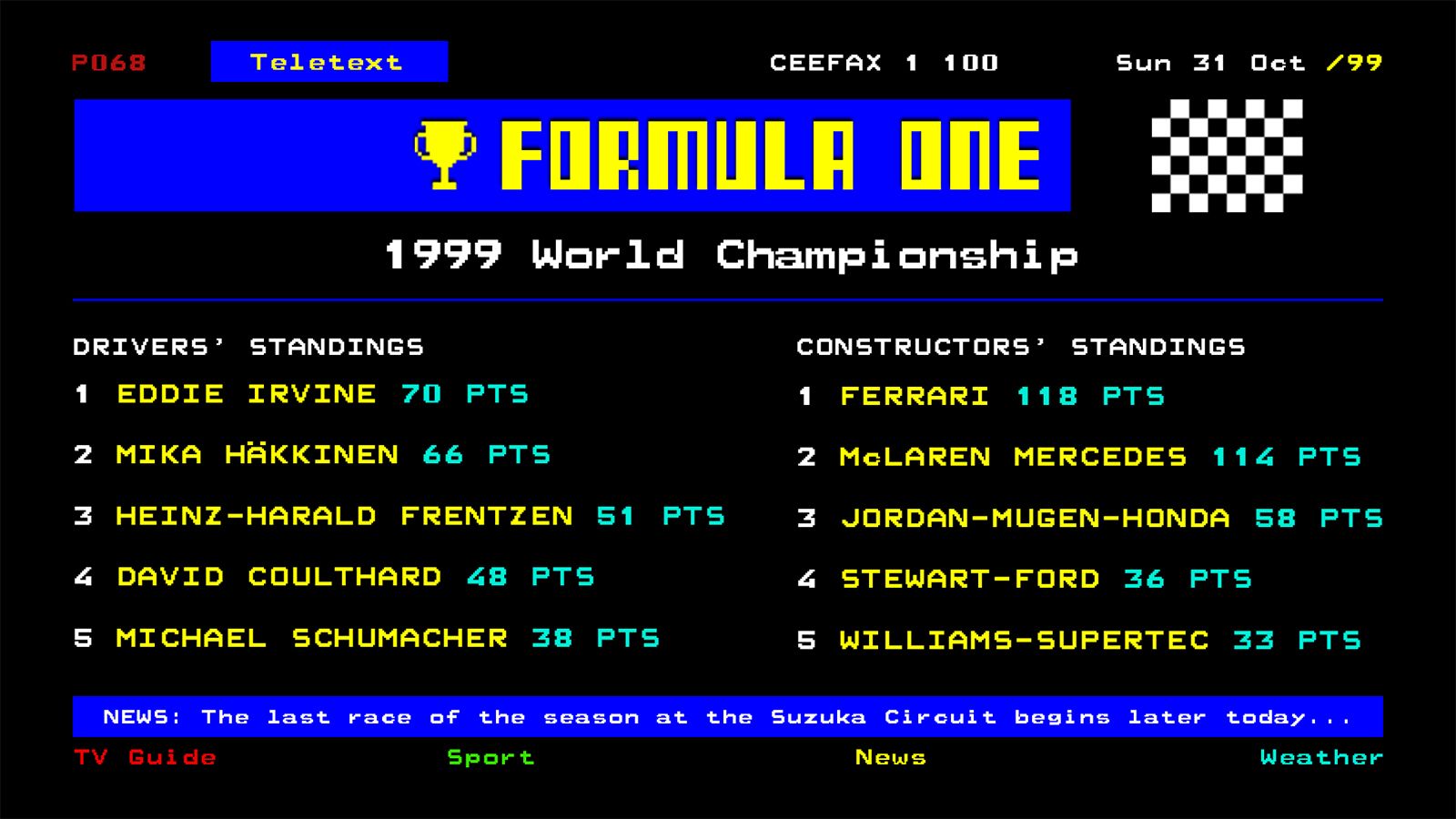 Homer couldn’t have put it better in season four, episode six of The Simpsons. In 1999, if you wanted to know what was on television, forget hitting the ‘guide’ button on your remote, you had to cast your eyes over TV guides printed in newspapers and magazines.

The nineties was a golden decade for television. It boasts countless shows we still love to watch to this very day, whether it’s The Fresh Prince of Bel-Air, Buffy the Vampire Slayer’s tireless efforts to make the world a safer place, or Friends – the reaction of fans when the latter became available on Netflix underlining what an impact it had. 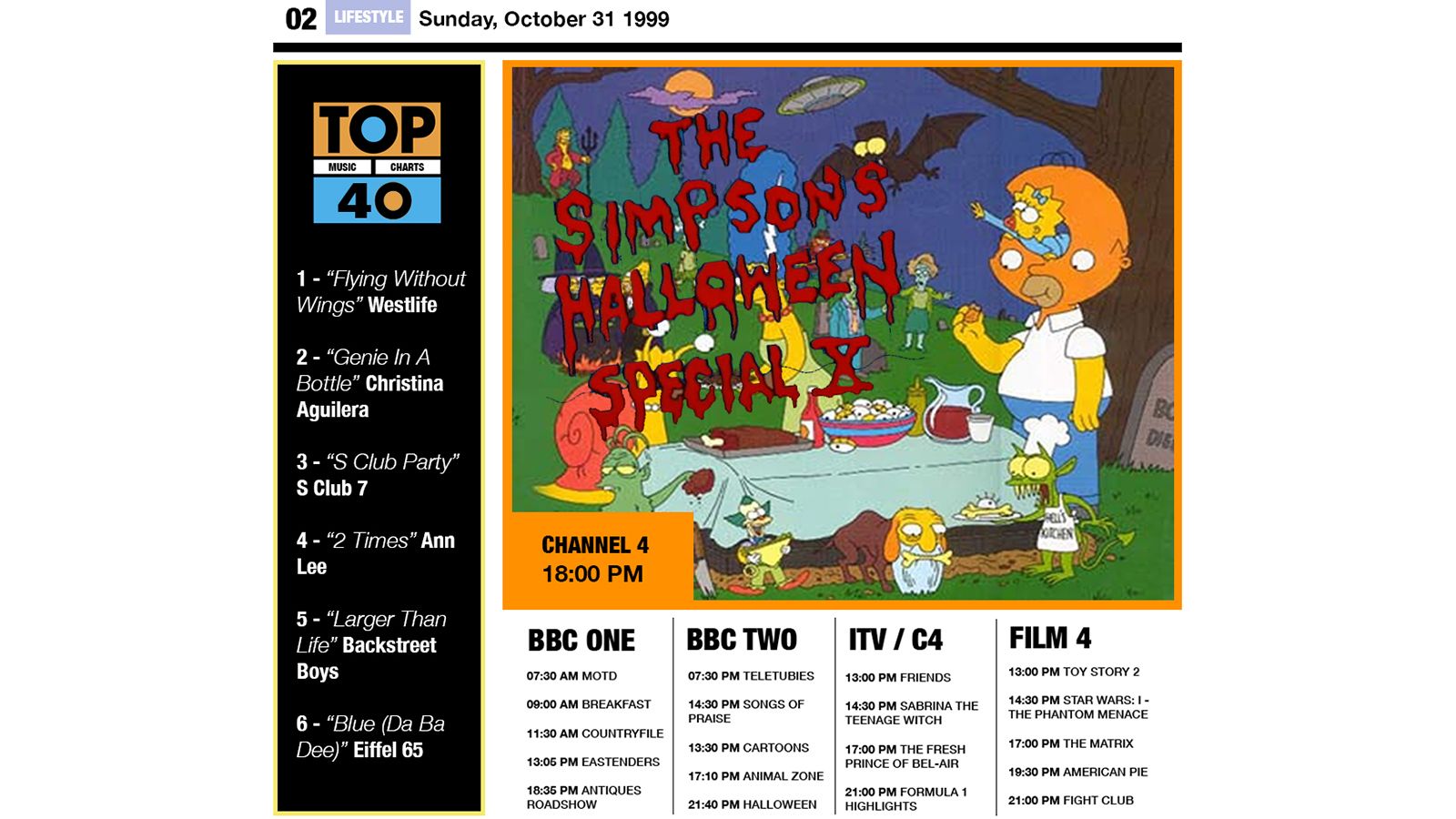 Speaking of Netflix, just a matter of weeks prior to the Japanese Grand Prix in 1999, an upstart DVD rental business launched a subscription service offering unlimited DVD rentals for a fixed fee per month. Little did we know that Netflix would go on to revolutionise how we watch films and TV… and of course, ‘chill’.

Lando was welcomed into the world just 13 days after Mika’s second title triumph in Suzuka and, curiously, our newspaper suggests that the baby of a certain couple in Bristol was found to be poised in the womb in the ‘perfect driving position’. Doesn't baby Lando look cute in that fuzzy ultrasound scan? We can’t help but think so. 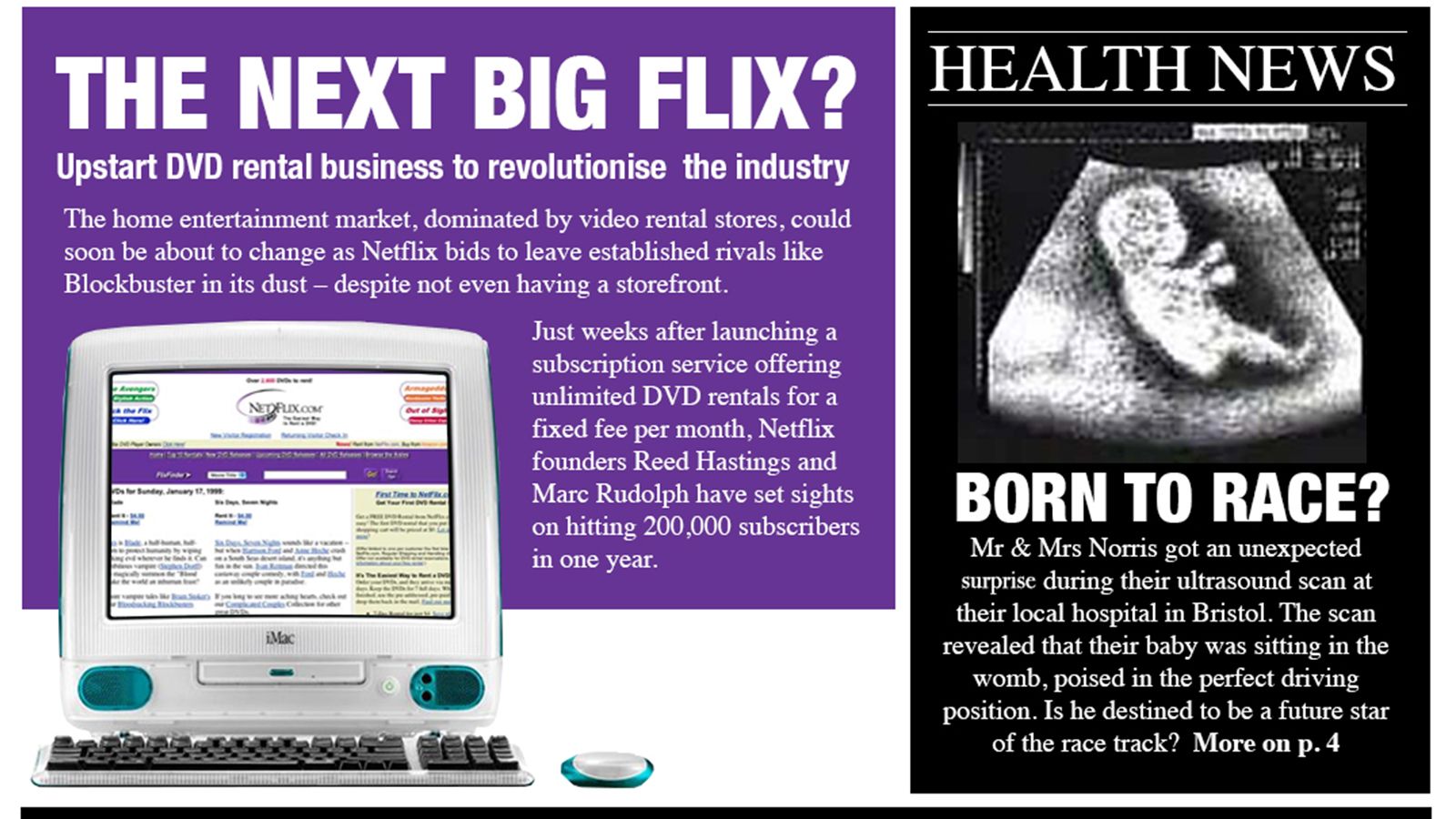 Top of the Pops

There’s no way we could turn back time without also hitting rewind on our CD players. At the end of the millennium, the charts had it all: breakthroughs, comebacks, timeless classics, one-hit wonders, hip-hop, electronica, indie rock, pop-punk, garage, country, R&B, and the list goes on.

To do every single artist and song justice would have been a tall order. But we decided to ‘Bring It All Back’ with a Top of the Pops chart in which Westlife’s ‘Flying Without Wings’ was number one the week of the Japanese Grand Prix in ’99 (it really was) and a Napster-inspired Mika ’99 Spotify playlist which gives your ears a taste of that magical year once again, with everything from Ricky Martin’s ‘Livin’ La Vida Loca’ to Fatboy Slim’s ‘Praise You’.

Sticking with the musical theme, Britney’s ‘…Baby, One More Time’ was released in late 1998, but it undeniably belongs to 1999 when, like Mika, it conquered the world. It made the perfect headline in our newspaper from the dramatic day of the title decider, and the ideal title for our web article – which brought you up to speed with the nine moments that defined our ’99 season prior to the Japanese Grand Prix. 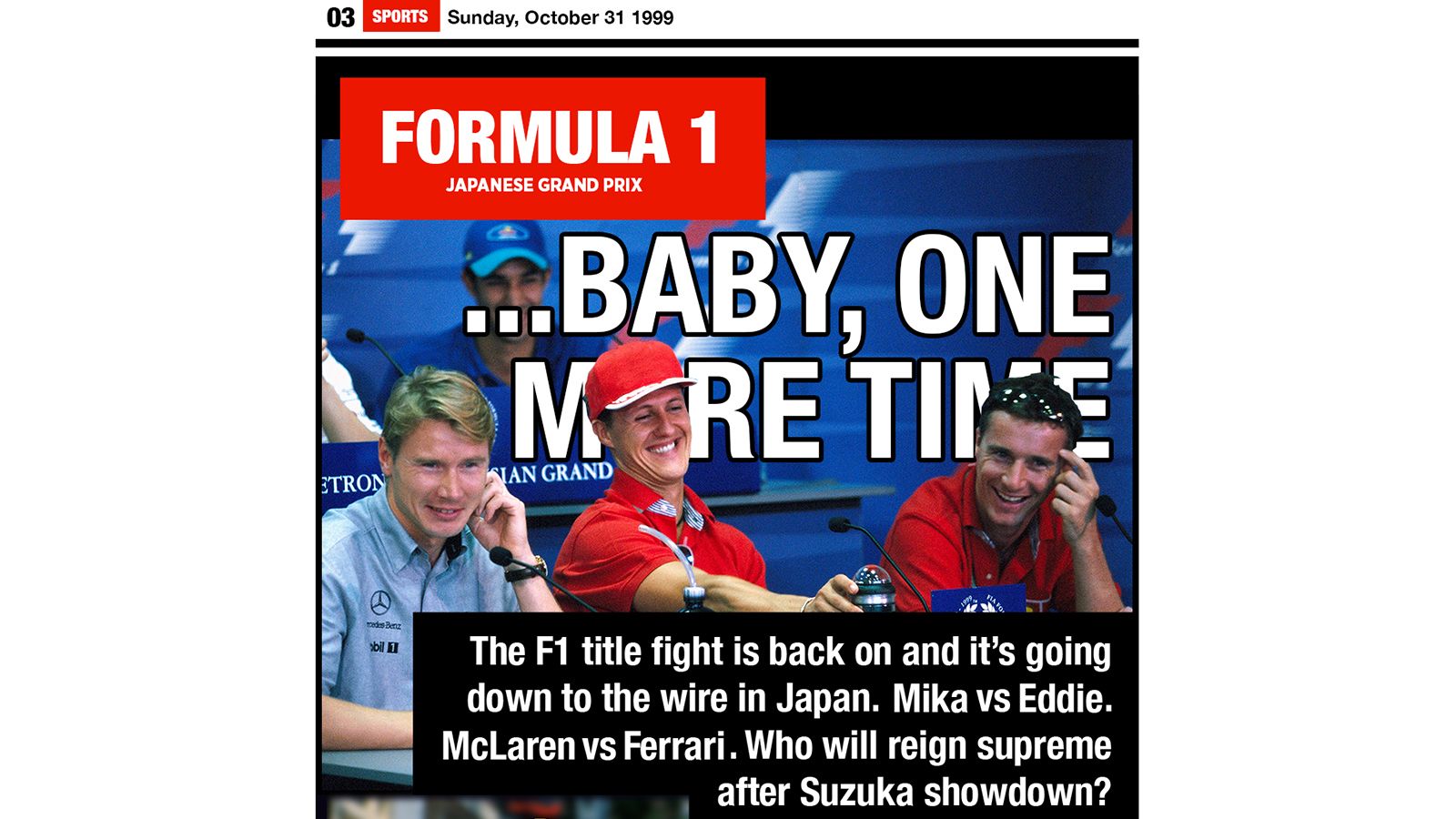 The relevance goes deeper than that though. The title of Britney’s smash hit is a cheeky nod to the controversial FIA decision that handed victory of the penultimate race of the season back to Eddie Irvine, after an initial disqualification due to a bargeboard infringement. Mika went from provisional world champion to four points adrift of Irvine heading to Suzuka and it meant the title race was back on… ‘one more time’.

If ‘…Baby, One More Time’ is a perfect lyrical fit with the dramatic ’99 season, then Charli XCX and Troye Sivan’s nineties nostalgia-laden throwback anthem ‘1999’ is the sonic soulmate for our Mika ’99 campaign. It’s awash with pop culture references from 20 years ago and the artwork for the single is inspired by Neo and co. from The Matrix. Is it any wonder that Charli’s lyrics ‘I just wanna go back, back to 1999’, titled our web article which outlined how we were throwing the party to end all parties – with Mika himself – to celebrate the twentieth anniversary of his epic title double?

People say how particular songs or smells can take them back to a certain place and time, but what about logos? The old FIA Formula One World Championship logo featured alongside track maps in the pre-race television build up, and our faithful recreation for social media certainly didn’t spare this detail.

Turning back the clocks to ’99 wouldn’t have been the same if our digital and social channels didn’t look the part, so for one day only we saw the return of the Rocket Red speedmark accompanied by dark grey hues, and splashes of black and white on our special 1999 Japanese GP TEAMStream. 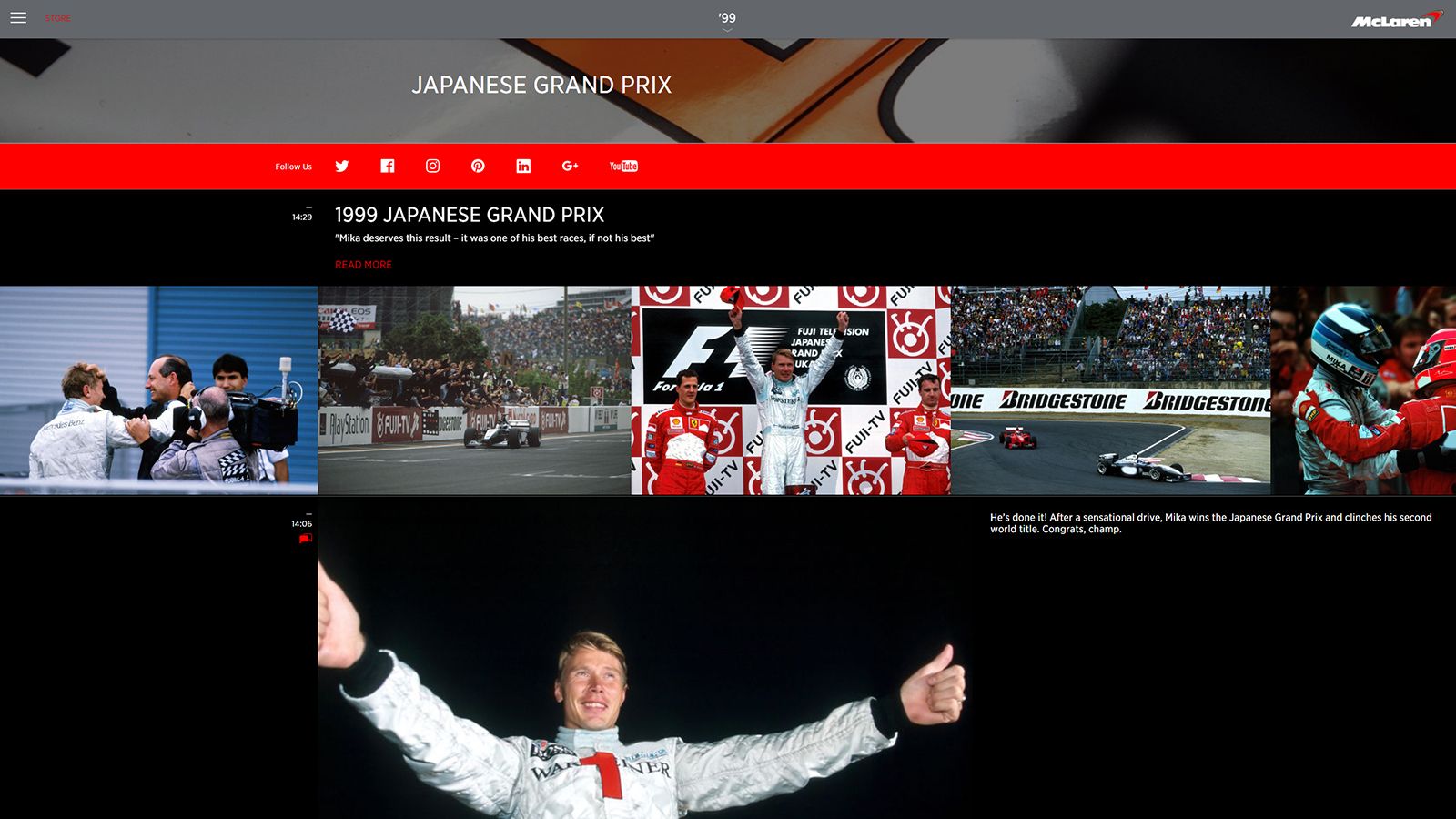 Tamagotchis, Tickle Me Elmo, and Bop It, did you spot any references to some of the toys that dominated the childhood of every millennial? They captured the imagination and, in some cases, even haunt us to this day. Yes, we’re talking about you Tamagotchi. We tried to keep you alive. We really did!

Formula One 99 on the PlayStation

Okay, this could have fallen into the ‘Toy Story’ category, but our graphic in the style of Studio 33’s Formula One 99 racing video game – showing how the top three drivers lined up on the grid for the 1999 Japanese Grand Prix – deserves its own special mention. F1 fans poured hours into this game, often battling it out over ‘full race distance’ and at the risk of temporarily losing feeling in their right thumb due to mashing the ‘x’ button down to accelerate for prolonged periods of time. 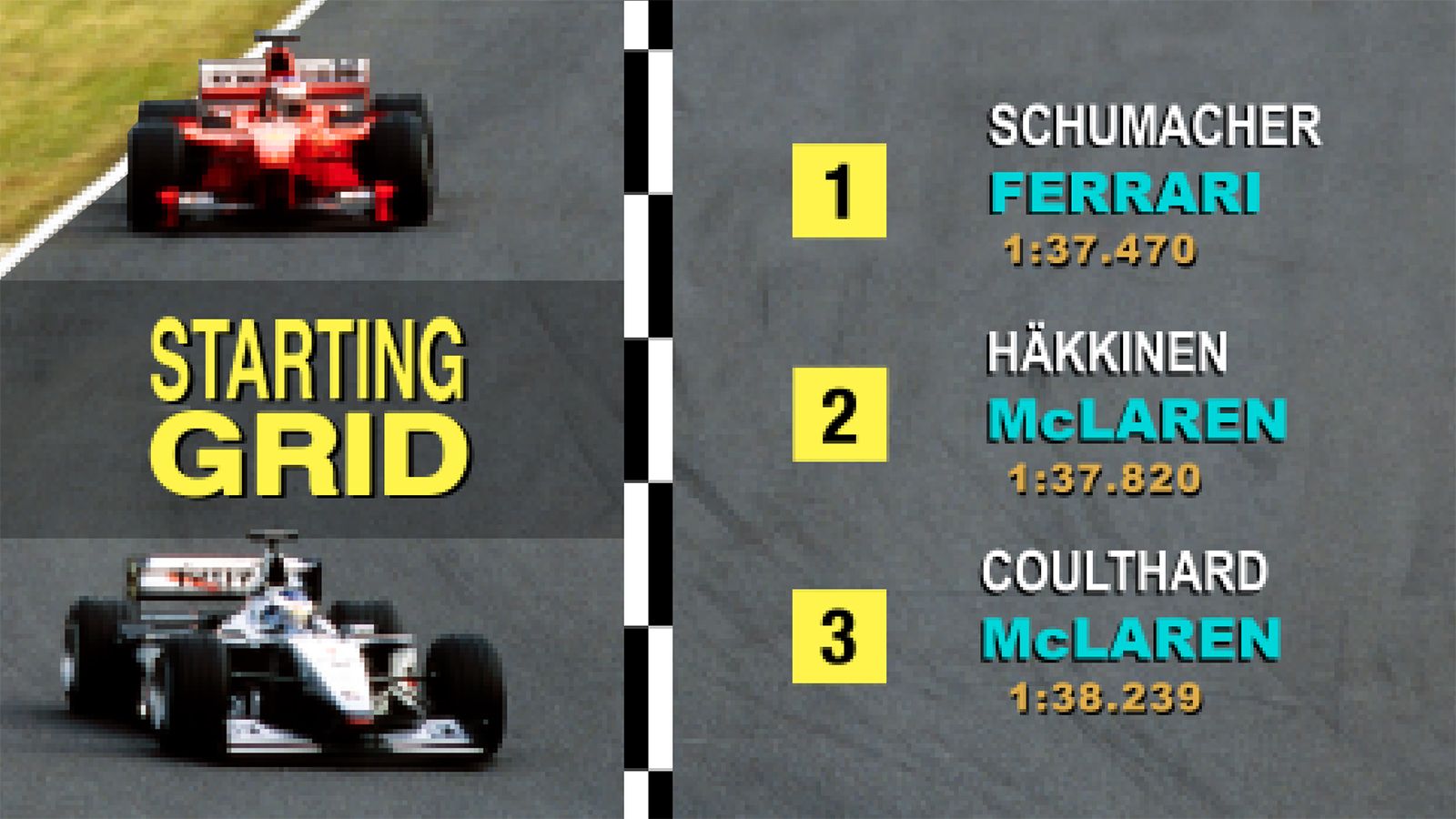 Gotta catch ‘em all. The Japanese trading card game exploded in popularity not long after its launch in 1998 and before you knew it, playgrounds across the land were littered with Pikachus and Squirtles. If Mika were to ever feature in the Pokémon universe, he would naturally be a much sought-after shiny card – in keeping with his supreme skill and sparkle behind the wheel and the livery of his MP4-14 – and he would of course be about as rare as a first edition Charizard. 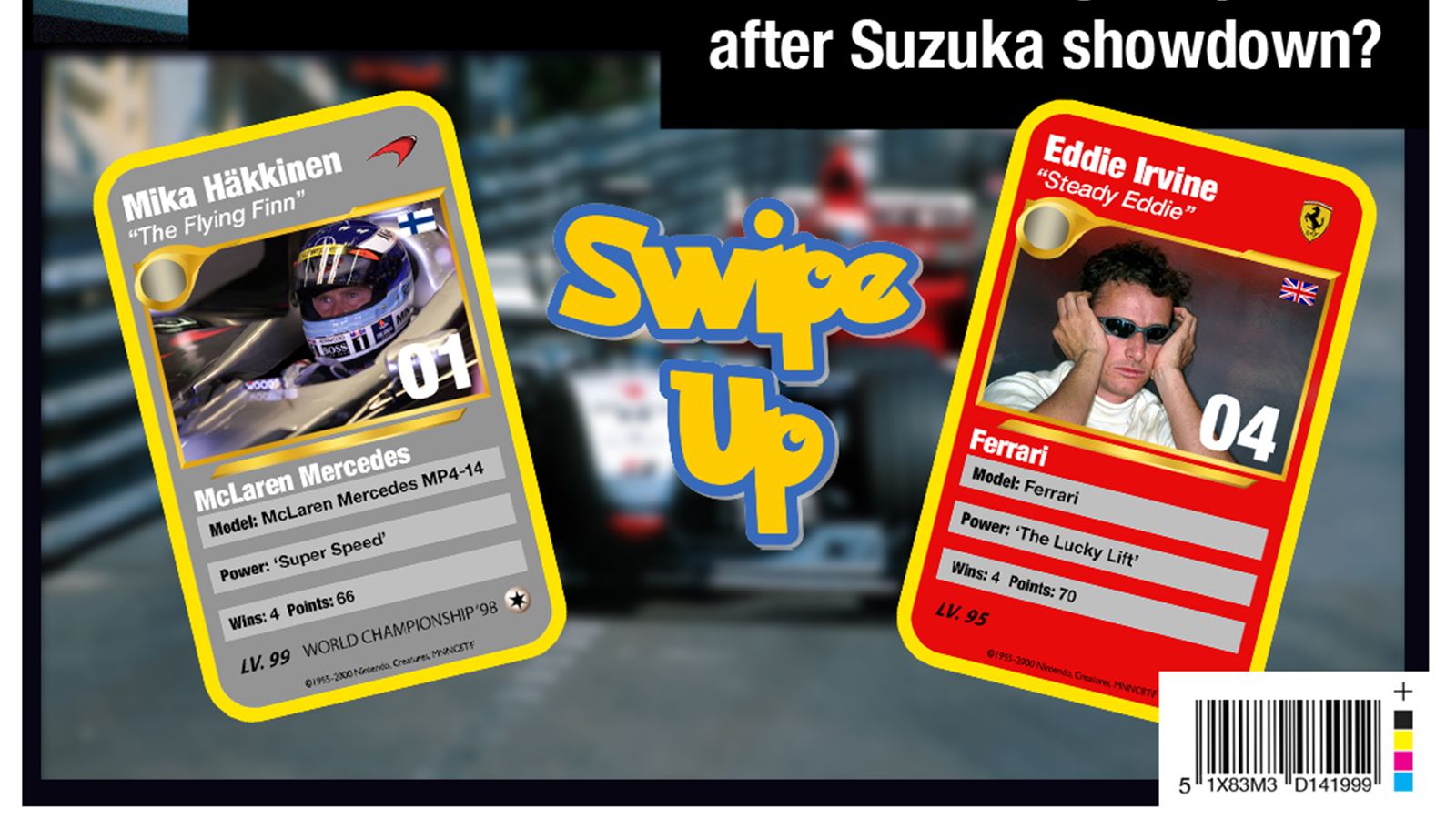 We put your knowledge of our ’99 season to the test with another one of our epic quizzes, and in the spirit of asking questions we couldn’t resist a little homage to Ask Jeeves. Everyone’s favourite butler was once king of the search engines, until being dethroned by Google. 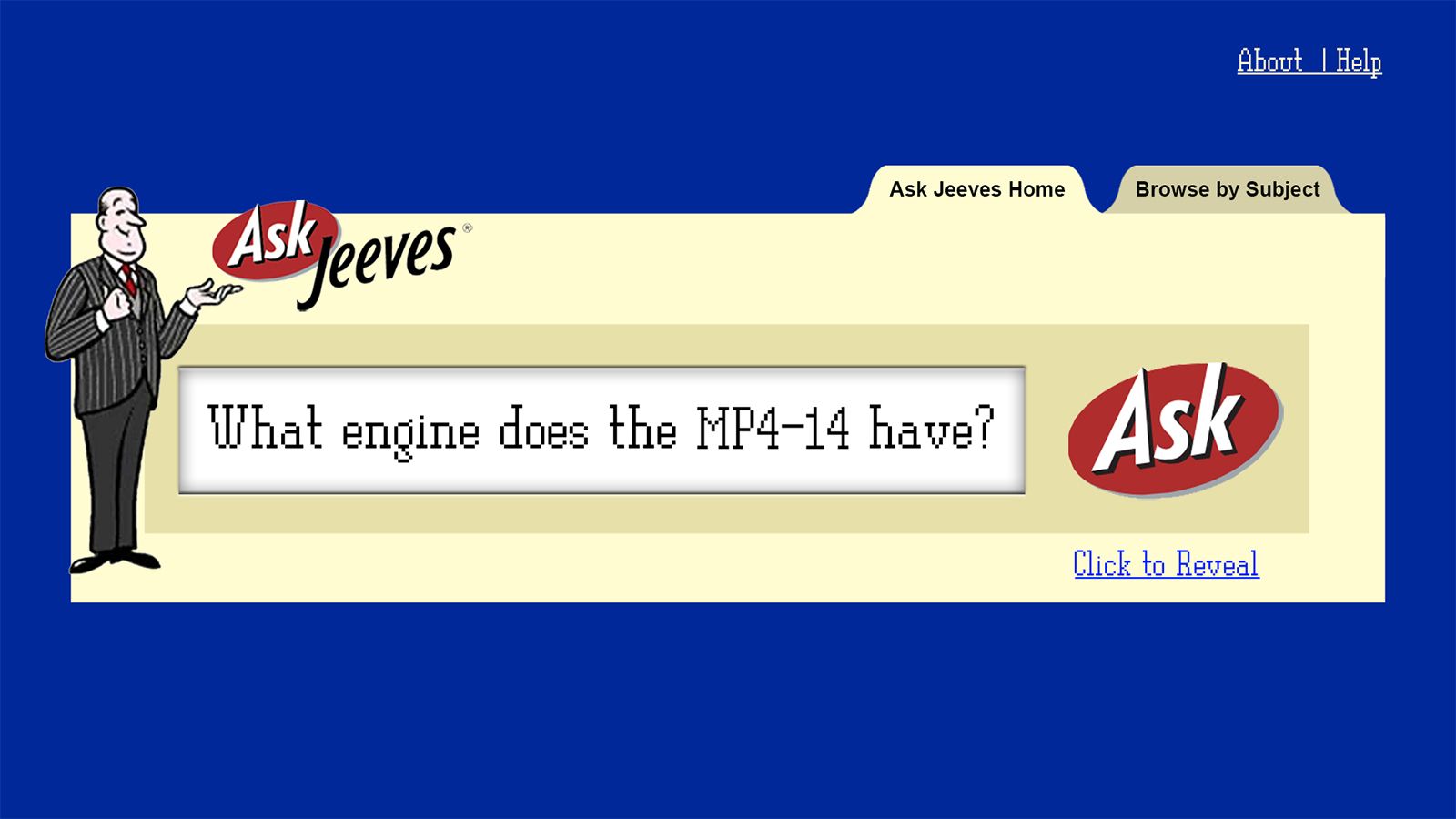 Having a mobile phone in 1999, specifically the Nokia 3210, instantly made you cool. Perhaps no phone in history elicits such reverence. It was pretty much bombproof, and its battery would last at least a week – possibly more – depending how long you spent playing Snake. Pause and you were screwed. Everyone knew that, even Mika, hence his reluctance to answer Ron’s call while completing his ‘training’. 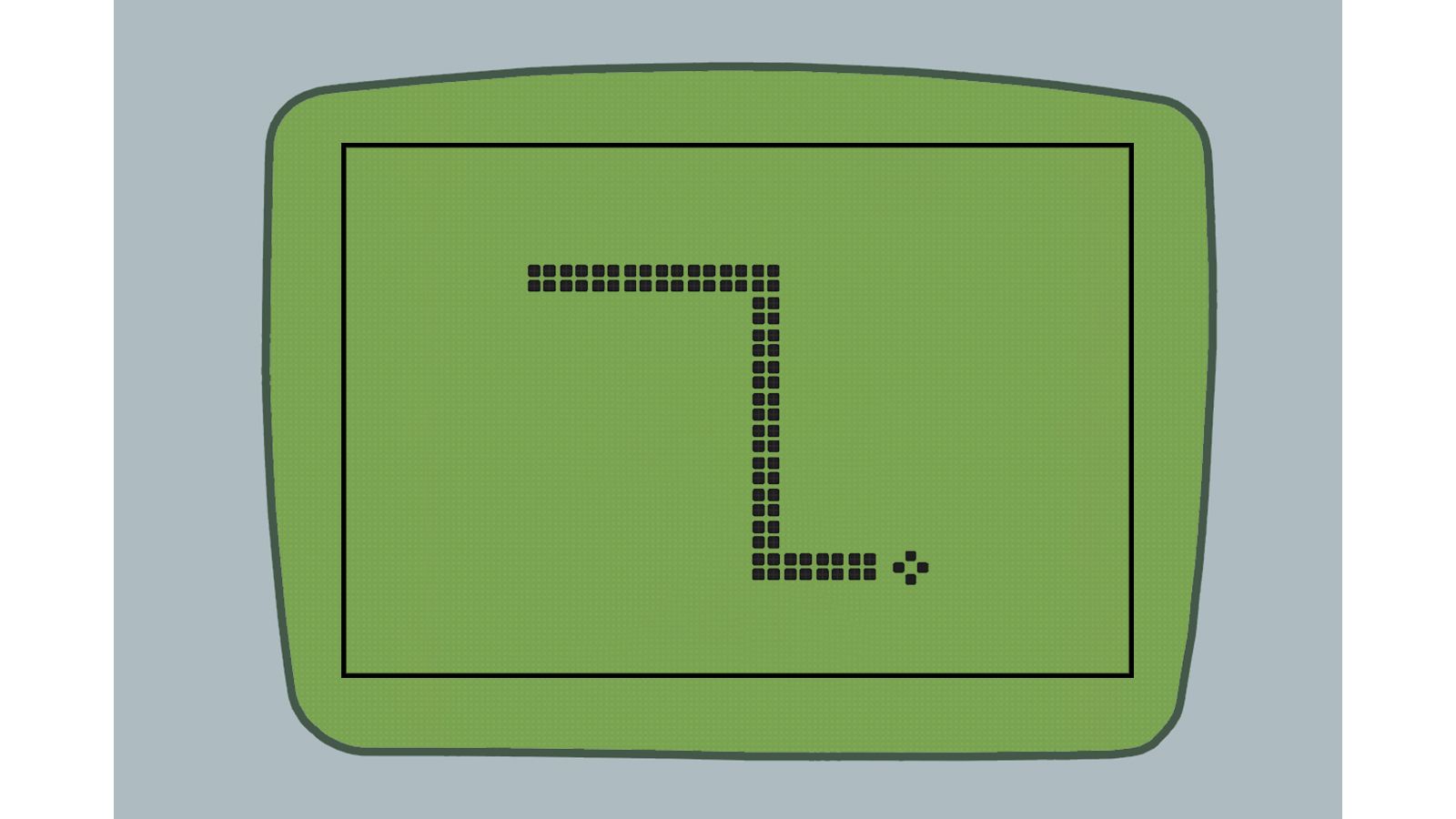 This iconic line of trainers got not one, but two mentions in our Mika ’99 campaign, and quite rightly so – they earnt maximum respect in the nineties. You’d have spotted a reference to Air Jordans if you scored between five and 10 in our ’99 F1 season quiz and there was no missing the mention of Nike Airs in the intro to our ‘An evening with Mika’ explainer article.

Japan is renowned for its phenomenal and passionate fans. Their displays of support are a feast for the eyes, and there’s never a shortage of fan art on show at Suzuka. This was no different in ’99, so we thought we’d create some fan art of our own. But in the spirit of authenticity, it would be too easy to create it in Adobe Photoshop. Instead, cue Microsoft Paint and Windows 98. 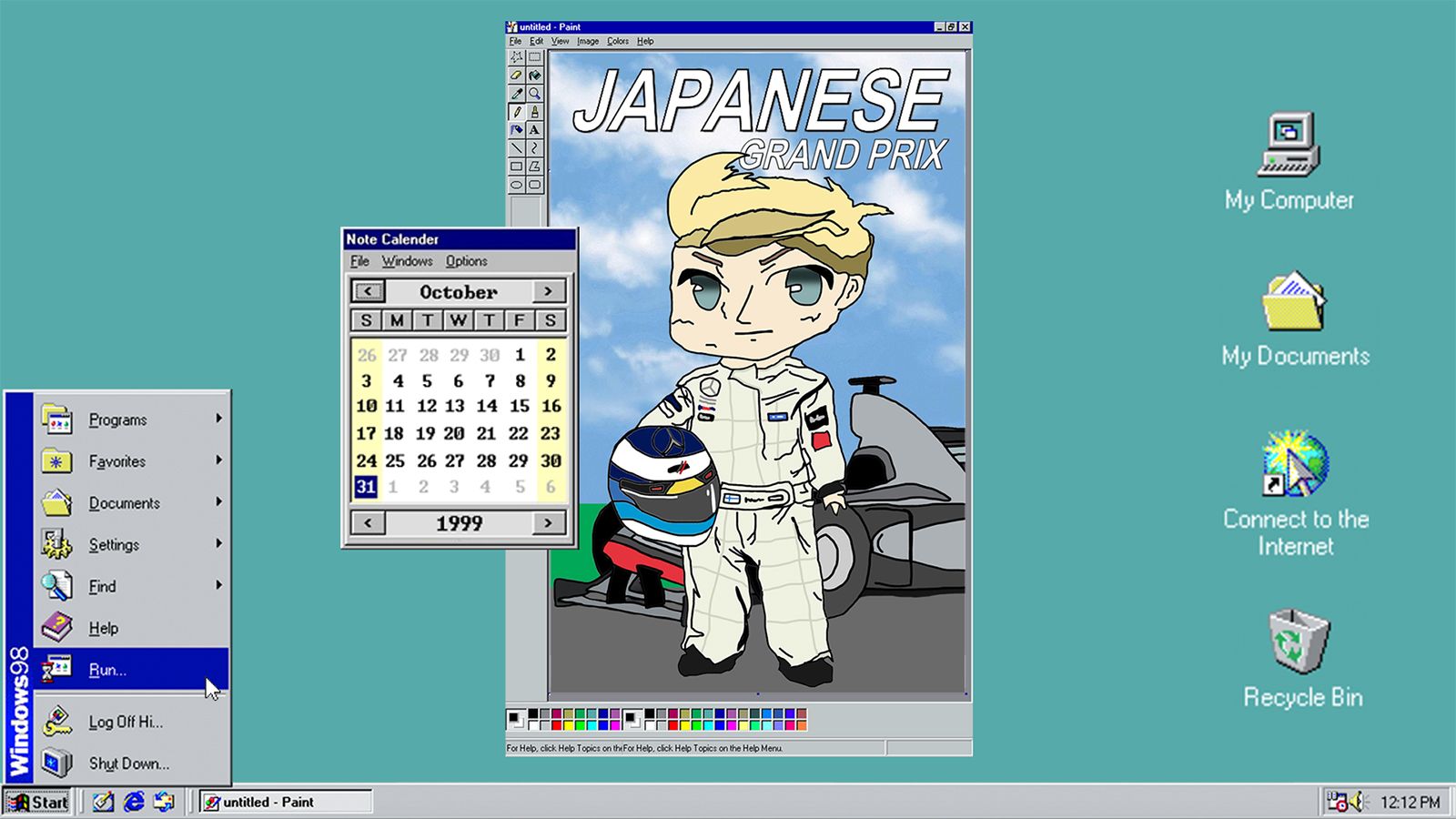 Not long after Windows 98 was launched, MSN Messenger came along and anyone now in their twenties or thirties will know the drill: spend all day at school chatting to friends, rush home, turn on the computer, and then chat to friends from school… again. MSN Messenger was the undisputed chat programme for teens everywhere, at least until Facebook Messenger and WhatsApp arrived on the scene.

The most unsubtle of nudge features, the pressure of choosing your own screen name. And then there was text speak flying around everywhere, like signing off with ‘GTG’ when you really did have to go, and you weren’t going to 'BRB' (be right back).

And on that note… GTG.