McLaren's drivers may have qualified only eighth (Kevin Magnussen) and 12th (Jenson Button) for this year's Monaco Grand Prix, but the famously daunting streets of Monte-Carlo have been a very happy hunting ground for the team these past 48 years.

Bruce made his grand prix debut in 1958, at the Nurburgring, driving a Formula 2 Cooper T45, driving superbly to finish fifth overall, ahead of quite a few Formula 1 cars.

He first raced in a Monaco Grand Prix the following year, 1959, finishing 13th, also in a Formula 2 Cooper T45.

In 1960, having raced his Formula 1 Cooper T51 to victory in the previous two grands prix - the season-ending 1959 United States Grand Prix at Sebring and the season-opening 1960 Argentine Grand Prix at Buenos Aires - at last he got the chance to race a fully fledged grand prix car at Monaco: the new 'low-line' Cooper-Climax T53. 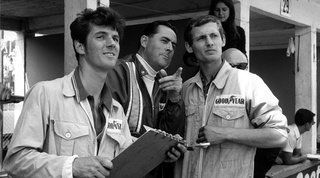 Still aged only 22, he arrived at the Principality understandably buoyed by his recent successes, but had a troubled qualifying, ending up only 11th on the grid. But the new car's promise had been shown by his team-mate, the reigning world champion Jack Brabham (God rest him), who qualified it on the front row, his lap-time beaten only by the brilliant Stirling Moss's fleet and nimble Lotus 18.

On race day, Stirling was untouchable, winning easily. In second place after the race's 100 laps had elapsed, though, was young Bruce, having battled his way through the field in fine style, clocking fastest lap on his way.

Bruce raced for Cooper in Formula 1 for eight seasons all told - 1958 through to 1965 - winning three of the 65 grands prix he started for the team, one of them at Monaco, in 1962. (By way of explanation, he'd founded Bruce McLaren Motor Racing Ltd in 1963, his new team focusing initially on the Tasman Series and eschewing Formula 1, allowing him to continue to drive for Cooper in Formula 1 even as he established his own race team for entry to Formula 1 in 1966. You could do that sort of thing in those days.)

Jack and Bruce enjoyed themselves in Formula 1 in 1960, finishing first and second in the world championship standings, winning six grands prix between them, their Cooper team ending the 2.5-litre Formula 1 era on a high.

The following season, 1961, engine capacity in Formula 1 had been reduced from 2.5 litres to 1.5 litres, and Jack and Bruce had an upgraded Cooper-Climax to race, the T55, complete with six-speed gearbox. The grand prix season kicked off at Monaco, and, again, Stirling won in his trusty Lotus 18, skilfully holding off the three elegant and powerful works 'shark-nose' Ferrari 156s of Richie Ginther, Phil Hill and Wolfgang von Trips, which finished second, third and fourth respectively. Bruce finished sixth, while Jack retired after 38 laps with an incurable engine misfire.

By 1962 Bruce was an established Formula 1 star, four years older than he'd been when he made his grand prix debut at the Nurburgring. The season started at Zandvoort (Netherlands), and Bruce was quick there, qualifying fifth and recording the race's fastest lap, but failing to finish owing to a gearbox problem. The race was won by Graham Hill in a BRM P57, but Jim Clark and the new Lotus 25 had shown themselves to be very quick, leading the race until 10 laps from the end when the Lotus's clutch failed.

As the cars drew up to their grid slots for Sunday's race, the track surface was still damp, the result of a mid-morning shower - and Jim's get-away was spoiled by a fast-starting Willy Mairesse, who tried to barge his Ferrari through into the lead from his P4 grid slot. Unfortunately he overcooked it at Ste Devote, blocking Jim and allowing Bruce to slip through into the lead, closely followed by Graham in second place. Jim ended up sixth at the end of lap one.

Over the next 10 laps Bruce and Graham enjoyed the kind of Monaco dice that would be impossible nowadays, modern cars' sophisticated aerodynamics preventing today's drivers from being able to run fast in each other's wheel-tracks without suffering loss of downforce owing to driving in 'dirty air'. (In 1960, we didn't know what dirty air was - Innes Ireland's breath after a night on the sauce perhaps!)

Again and again the lead swapped, and by lap 22 Jim had clawed his way up to third, behind Graham and Bruce. On lap 28 Jim nipped ahead of Bruce and immediately set about trying to find a way past Graham too. A couple of times he got close, but he never quite managed it, and on lap 55 his race was ended, a clutch problem yet again halting his fast but fragile Lotus.

By lap 90 of 100, Graham had built up a decent lead, and Bruce was in an equally secure second place. Suddenly, though, smoke began to appear from the back of Graham's BRM, and then it stopped with engine failure. The lead - and victory in the Monaco Grand Prix - was 24-year-old Bruce McLaren's.

Bruce would drive for Cooper for three seasons more - 1963, 1964 and 1965 - but his 1962 Monaco Grand Prix win would be his last grand prix victory for the team. Many times he scored grand prix podium finishes for Cooper during those years, but never again did he win a grand prix.

By 1966 Bruce McLaren Motor Racing Ltd was ready to enter Formula 1, and Bruce therefore bade farewell to Cooper, after a successful and enjoyable career spent driving the team's rugged and reliable cars in Formula 1.

McLaren's first grand prix was, yes, you've guessed it, the 1966 Monaco Grand Prix. Only one car was fielded - for Bruce - and the team enjoyed a respectable debut, Bruce qualifying his McLaren M2B 10th but retiring early with an oil leak. 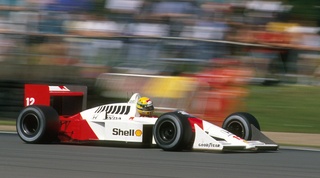 The Destination Is Domination

By the following year, 1967, McLaren was already becoming a well-organised Formula 1 outfit, albeit still fielding only one car, and Bruce again qualified 10th at Monaco, this time at the wheel of the team's new McLaren M4B.

On the opening lap Bruce made contact with Jo Siffert's Cooper-Maserati as he swerved to avoid Jack's Brabham, whose Repco engine had just exploded, but fortunately for the McLaren boys only Jo's car had suffered any damage and Bruce was able to proceed at a pace unabated by his minor shunt.

By the end, Bruce's friend and fellow Kiwi Denny Hulme had taken his first grand prix win, driving a Brabham, Graham was second in a BRM, another friend and fellow Kiwi, Chris Amon, was third in a Ferrari, and Bruce was fourth in his own car: a pretty creditable first-third-fourth result for the boys from New Zealand.

Having said that, after the race none of them felt like celebrating, for, on lap 82, running second to Denny, Ferrari's Lorenzo Bandini crashed at the Harbour Chicane.

His car ended up upside-down, and caught fire as the result of a ruptured fuel tank. Lorenzo couldn't get out. When at last the marshals removed him, he'd been badly burned, and three days later he died in hospital.

That sort of thing used to happen in those days.

At Monaco the following year, 1968, Bruce qualified his new McLaren M7A seventh, but spun off on lap one and was unable to get going again. End of race. But two weeks later, at Spa-Francorchamps, he enjoyed arguably the greatest day of his life: on the world's most daunting grand prix circuit, driving a car of his own making and bearing his own name, he won. It was McLaren's first grand prix win... and Bruce McLaren's last.

That race took place on May 10th 1970. Three weeks later, on June 2nd 1970, testing a McLaren M8D Can-Am car at Goodwood, Bruce crashed on the Lavant Straight, and was killed.

Unwittingly, when writing about the death of his friend and fellow racing driver Timmy Mayer, he'd penned what is now widely regarded as the definitive racing driver's epitaph. "To do something well is so worthwhile that to die trying to do it better cannot be foolhardy. It would be a waste of life to do nothing with one's ability, for I feel that life is measured in achievement, not in years alone."

So, when you see the two sleek silver McLaren MP4-29s take their places on the grid to start this year's Monaco Grand Prix, and as you watch Kevin and Jenson getting the hammer down and powering along the startline straight, flicking right through Ste Devote, and surging up the hill towards Massenet and Casino Square, spare a thought for the man who founded the team they race for, Bruce Leslie McLaren, the boy from Auckland, New Zealand, who made his way to Surrey, England, and without whose talent, ambition and guiding influence the history of grand prix racing would have been entirely different.

Gilles Villeneuve... what if?

The Destination Is Domination