It was 30 years ago this week that Alain Prost clinched his first World Championship title. As Maurice Hamilton's excellent new book on the Frenchman reminds us, he'd worked hard to get to that position, coming close with Renault in 1983 and again in his first season at McLaren in 1984.

Finally in '85 everything came together, and with limited opposition from team-mate Niki Lauda, he made it look easy. It wasn't of course – that was just the impression created by Alain's controlled driving style and methodical approach, which together had helped to earn him the nickname 'Professor.'

The dynamics at McLaren during those two Prost/Lauda years were fascinating to behold. Niki had already been at the team for two seasons, helping to lay the foundations of future success with the TAG/Porsche engine, when Prost arrived unexpectedly on the scene. He'd been sacked by Renault after the messy end to the French team's '83 season, and in theory he should have had nowhere to go.

However, John Watson hadn't yet signed a new McLaren contract for '84, so Ron Dennis and Marlboro were able to jump in and secure Prost for a bargain basement price. And as Alain recounts in the new book, it was the only time in his career that he signed a contract as a number two driver. 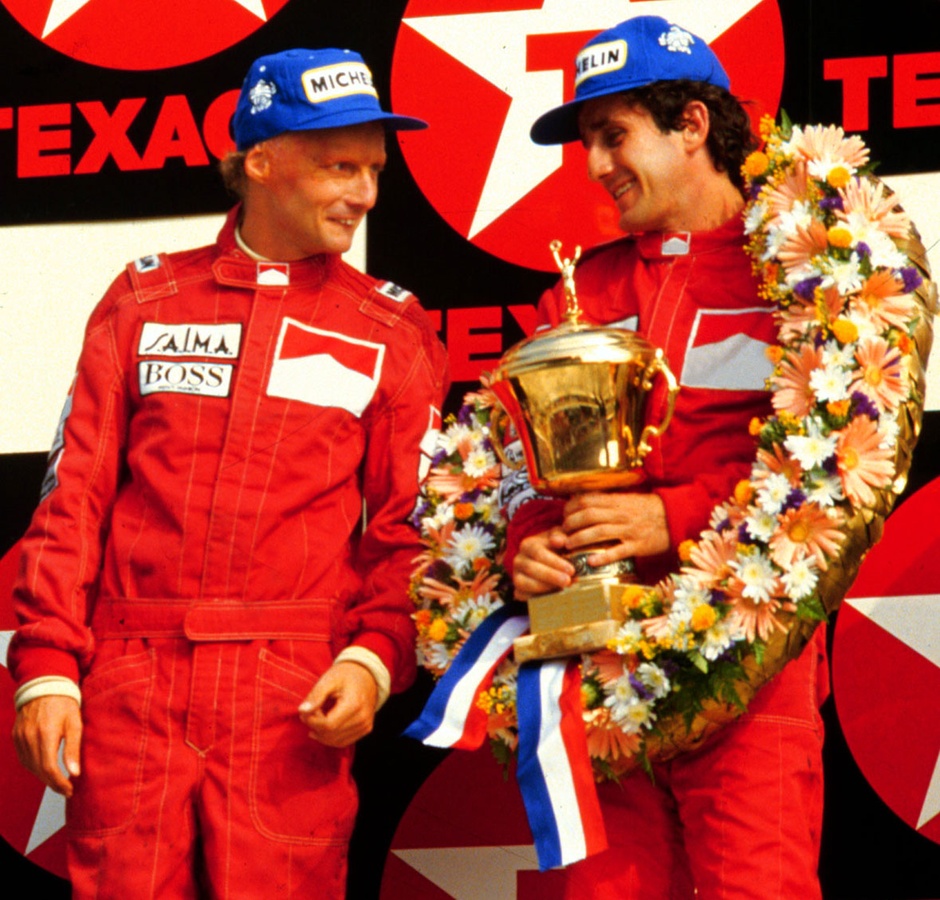 Not surprisingly Niki felt a little put out when this interloper arrived, and especially when he proved to be so fast over one lap. Alain was also quick to integrate himself within the McLaren camp, and he soon won over the engineering staff with his devotion to developing the car.

In hindsight Prost's timing was perfect, and it was a bit like arriving at Mercedes at the start of 2014. The new package was superb, and the combination of John Barnard's MP4/2 chassis and the German-built V6 proved to be just the ticket. Lauda and Prost dominated the season, but it was the way they did it that proved to be so intriguing.

Lauda famously adjusted his approach and focused on preparing his car for the races rather than taking on Prost in the battle for pole. It worked, and on Sundays Niki would be hard to beat, helped by Prost striking mechanical gremlins more often. It all came down to the finale at Estoril. Prost did everything he could do by winning – but at the flag Lauda was there in the second place that he needed. He'd logged only five wins to Prost's seven, and had beaten him in qualifying just once in 16 attempts, in Dallas. But Niki won the title by half a point.

“When he won the championship I was not sad at all,” Prost said recently. “Even if I lost the championship by two points the year before, and also '81 and '82 could have been winning seasons. I was not too disappointed, because the ambience was so good. At the end I felt happy also for him.

“Whenever I talk to Niki we remember that we had so much fun together, we were really friends. Sometimes in the season you remember things outside racing. The party we had in Estoril was one of the best! I was not lucky with the mechanical things, but in the end it was a dream season for Niki. Coming back after stopping his career and being World Champion, and beating me by half a point, it was so good in the history of F1 that I am really proud to be part of that story.”

On the podium at Estoril Lauda told Prost that his time would come, but even Niki could not have predicted how one-sided things would be in '85. He had perhaps one of the poorest seasons a defending World Champion ever experienced, and was plagued with reliability problems. His motivation clearly suffered, and at his home race in Austria he announced that he would be retiring for a second time at the end of the year. After that it was a case of counting down the races.

Prost meanwhile was on superb form. He won in Brazil, Monaco, Britain, Austria and Italy, and was disqualified from top spot in the San Marino GP when the car proved to be a trifle underweight.

However, he only took two poles, and indeed often started from fourth, fifth or sixth on the grid. McLaren faced much stronger opposition compared to 1984, from Ayrton Senna and Elio de Angelis at Lotus-Renault, and later from Nigel Mansell and Keke Rosberg and the emerging Williams-Honda package. However the biggest title threat came from Michele Alboreto and Ferrari, as the Italian combination kept piling up the points.

Prost thus had to work even harder than before, and rely on a cannier approach than he'd adopted the previous year.

“In '84 I learned a lot,” he recalled. “Because I said to myself that maybe the quickest driver is not going to win the championship, and for the future I have to think and work maybe differently. In '85 I had a lot of races where I was thinking it was better to finish second or third or fourth, rather than going too fast or taking a risk. So in fact you always learn about these things, and in the end Niki's way was right. I do not say I was wrong, because I was not very lucky [in '84], but this is the way it is.”

In an age when reliability and fuel consumption played such key roles, it was a wise choice. As he implied, Prost won the '85 title through consistency, bringing the car home and securing those priceless second and third places. Having said that he was quick when he needed to be.

The championship showdown came not at a glamorous 'flyaway' location as is usually the case, but at Brands Hatch, where a European GP had been slotted into the schedule on October 6, with just South Africa and the new street race in Adelaide to come. 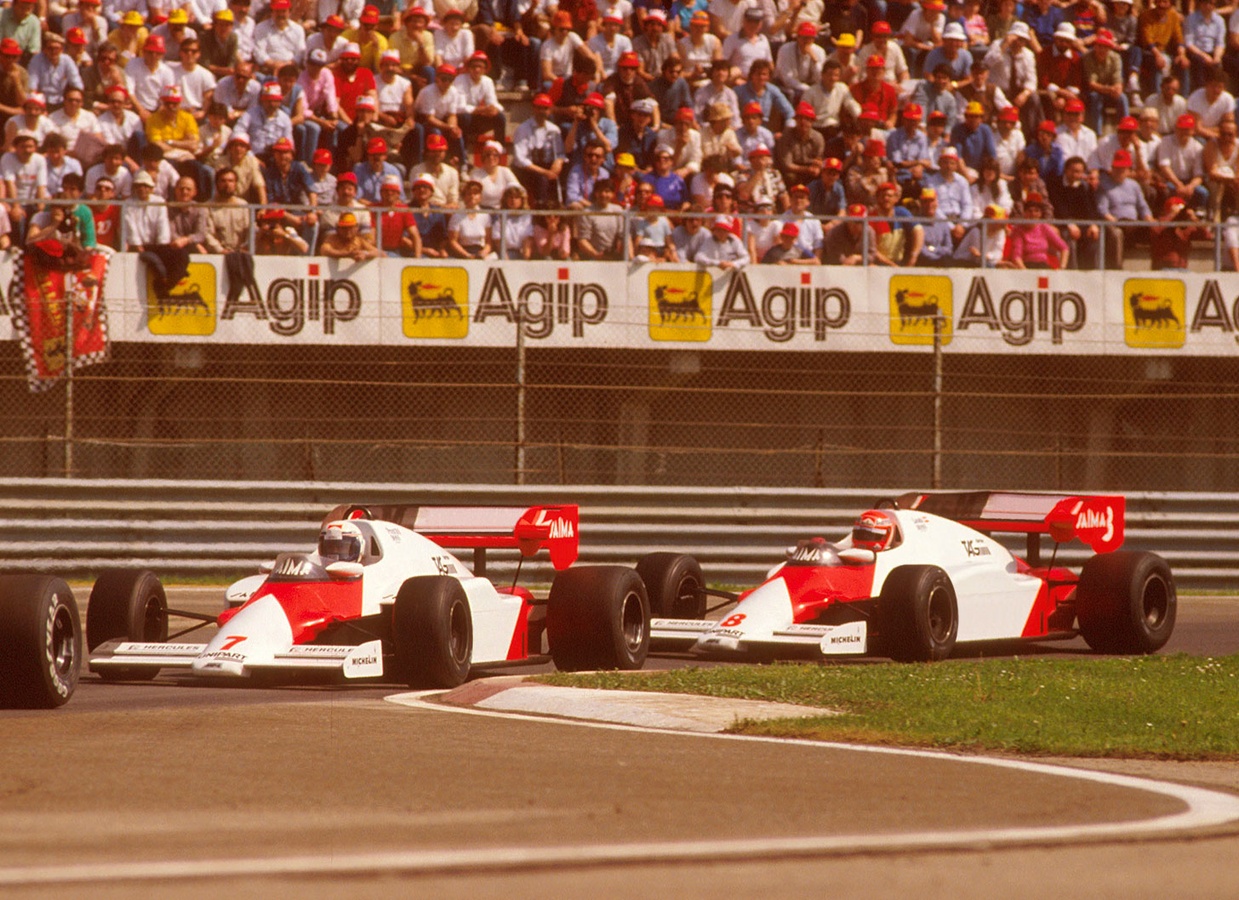 Things didn't appear to be going well for Prost when he got bogged down at the start and dropped to 14th, and after that it was a long, hard slog to fourth place, with trouble for those ahead playing its part. The crowd may have only had eyes for local hero Mansell – who scored his first Grand Prix victory for Williams – but Alain did just enough to secure the title, helped by the fact that Alboreto had retired.

So in his sixth F1 season Prost was finally World Champion. He was also the first (and still the only) Frenchman to achieve the sport's highest honour.

Even before they became McLaren team-mates, debate raged about whether Prost or Senna – who had scored his first two GP wins at Lotus that year – was the better driver. At the time his future biographer Maurice Hamilton ranked Alain number one in the Autocourse annual top 10, and noted “in terms of getting the job done with the equipment available, Prost had no equal in 1985.”

I was always an admirer of Prost and the way he went about his racing, and thus I had no reason to disagree with those sentiments. The names ranked below him in that 1985 list – Senna, Rosberg, Piquet, Alboreto, Mansell, Lauda and de Angelis – provide a reminder of what a fabulous era that was, and thus what a truly great driver Prost had to be to come out on top. Maurice's book provides a fantastic insight into a remarkable career, and I heartily recommend it.

On the Hunt at Watkins Glen 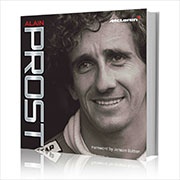 Prost does all the work for no reward