After visiting the Hungarian Grand Prix in 2013 it was clear, if there will be an Austrian GP 2014 I have to go there! No sooner said than done! The queue for the tickets was enormous and they sold out after only a few hours - this already showed how huge the interest and support for the comeback of Formula 1 in Austria is.

We managed to get the 3 Day Tickets for the Grandstand – lucky us! With the Grand Prix weekend coming closer, and being chosen McLaren Fanblogger, the thrill of anticipation was huge for a couple of reasons:

- I have not been to a whole Grand Prix weekend before
- It is the comeback of Formula 1 in Austria
- Being Fanblogger for McLaren brings perfectly together two of my passions – Formula 1 as my favourite weekend amusement and social media as my daily business, which I love, in a web agency in Vienna

Eleven years Austrian fans had to wait for the return of Formula 1 to Spielberg, so my first thought for the blog post was to revolve it around this number “11” - “11 race moments, 11 fan statements why they love McLaren, 11 tips for visiting a Grand Prix etc”. But then it occurred to me that I want to write about my personal experience – so here is my mash up of 11 highlights, impressions, discussions, questions and tips: 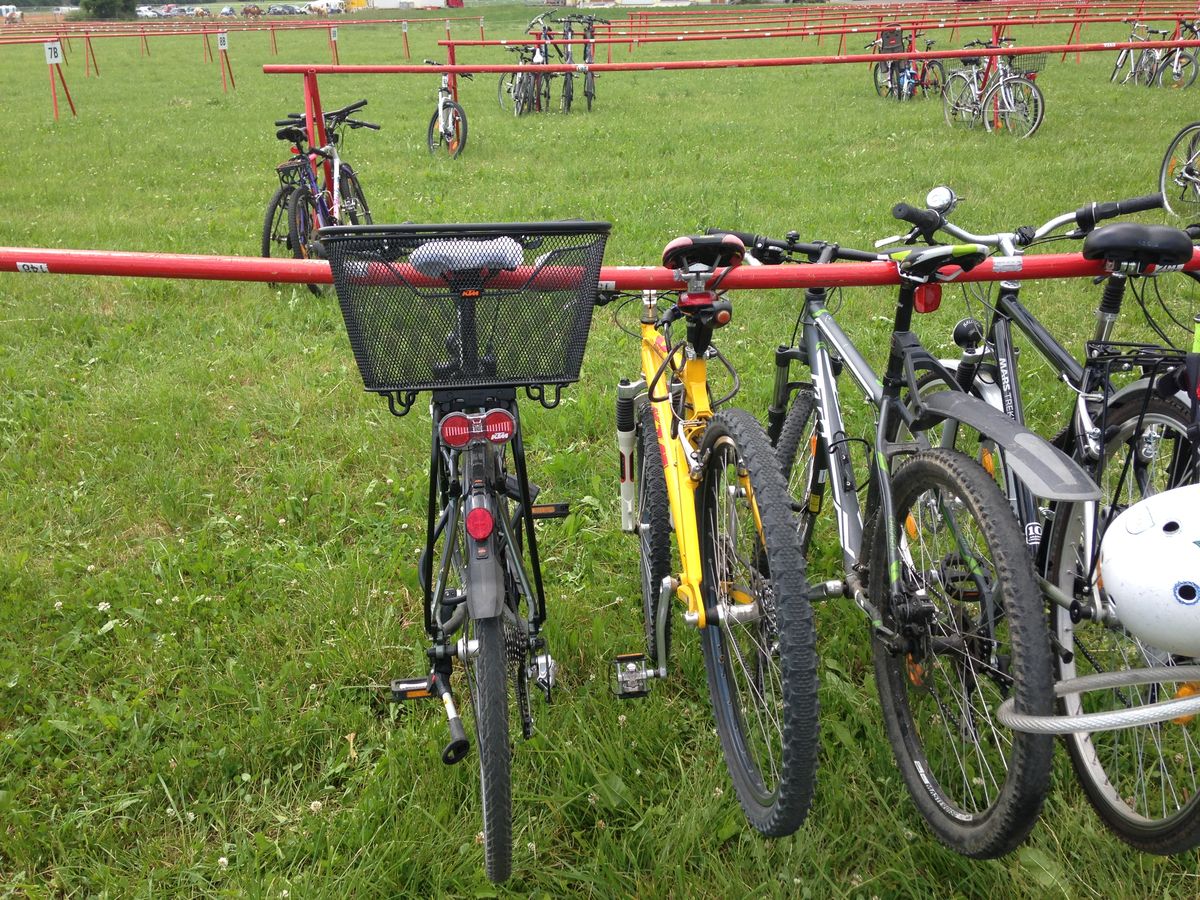 To avoid any traffic jams, as on Thursday with all the campers arriving and on Sunday after the race, I liked the idea of ‘Park and Bike’. Three parking areas between 7 - 9 kilometres away from the race track are reserved for visitors who ride their bicycles to the track where there is a parking site for the bikes right in front of the main entrance to the ring. It worked perfectly and was always a really nice start and end to the Grand Prix day. Not really a lot of people used this service and I do not know if other race tracks also provide it, but everybody who came by bike loved it and it is a concept that will be successful and I would have plenty ideas for to develop further. 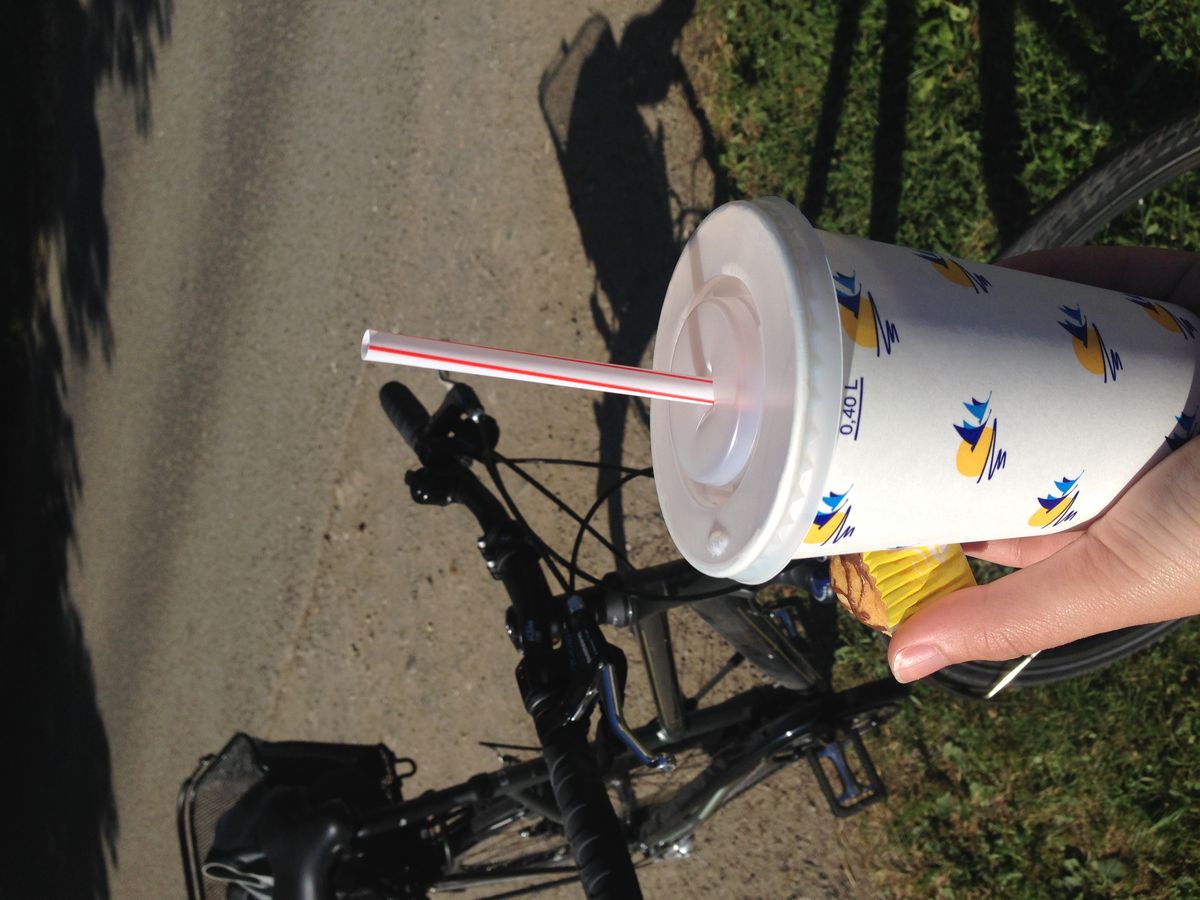 Thursday was a public holiday in Austria, so we took the chance to get to the track early and do the public pit lane walk. It was scheduled to start at 15.05 and I thought we were early by getting there about 30 minutes before it started. Uh, what an error I, and the organiser, committed – we both underestimated the Austrian fans. It took us about two and half hours to be guided onto the track by the pressure of more fans from behind – not very nice. Was it worth it? Definitely. Do they have to do something about it? Most definitely. With just 30 minutes left before the planned end of the pitlane walk we went directly to the McLaren Box. They were about to do some pit stop practice and as people just refused to leave the pitlane and walk on, they just started it, great! 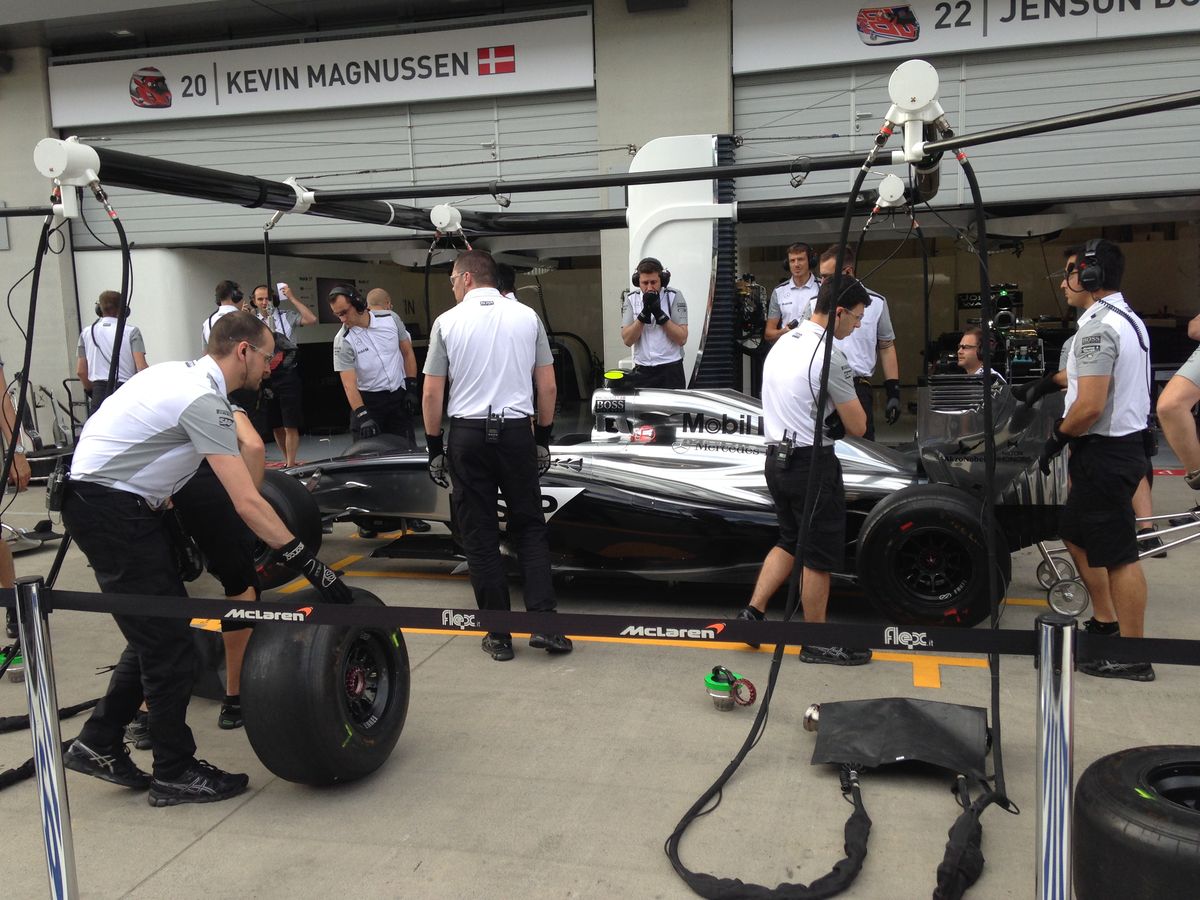 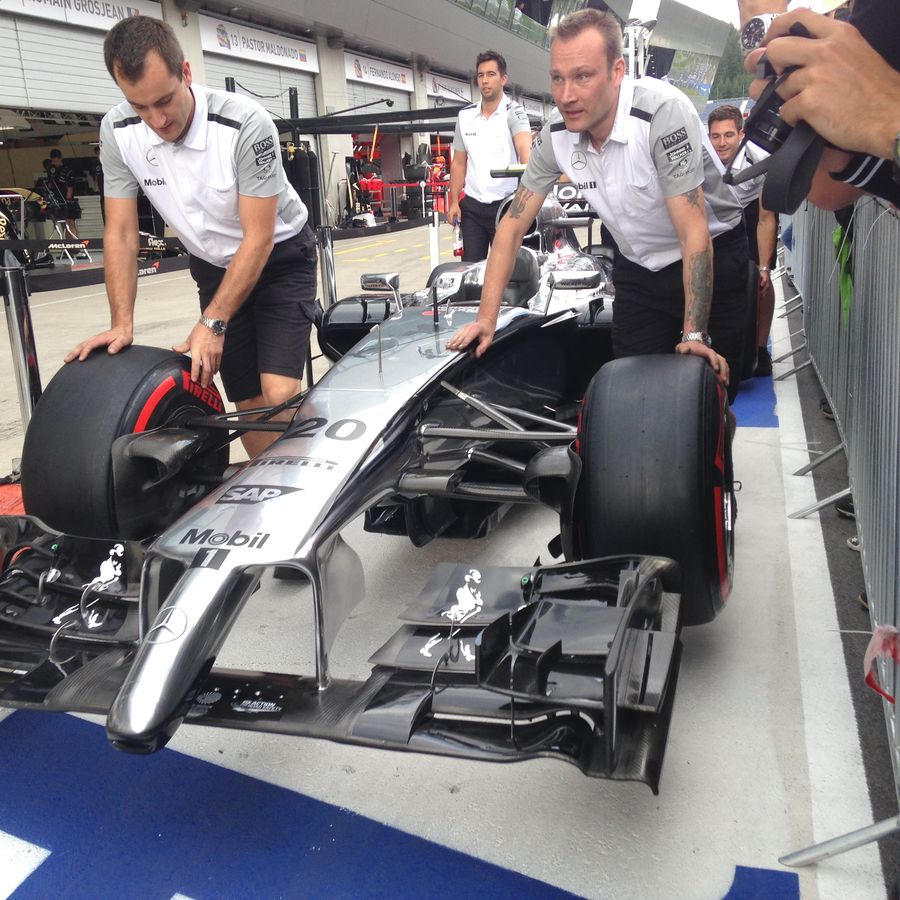 Following the example of the teams doing their track walks we did our “Around the Track Walk”. The Friday afternoon qualifying sessions of the support races were the perfect occasion to see the cars going through all the turns from different angles. As it was already a little bit later in the day and visitors were “few” (compared to Saturday or Sunday) you could easily walk around the whole area, take a seat on different stands and find your favourite spot in the “green area” - the natural meadow hill stands. The around-the-track-walk also showed what makes this circuit so special – it is going up and down more or less in the middle of nowhere – woods, fields, pastures – that's it. 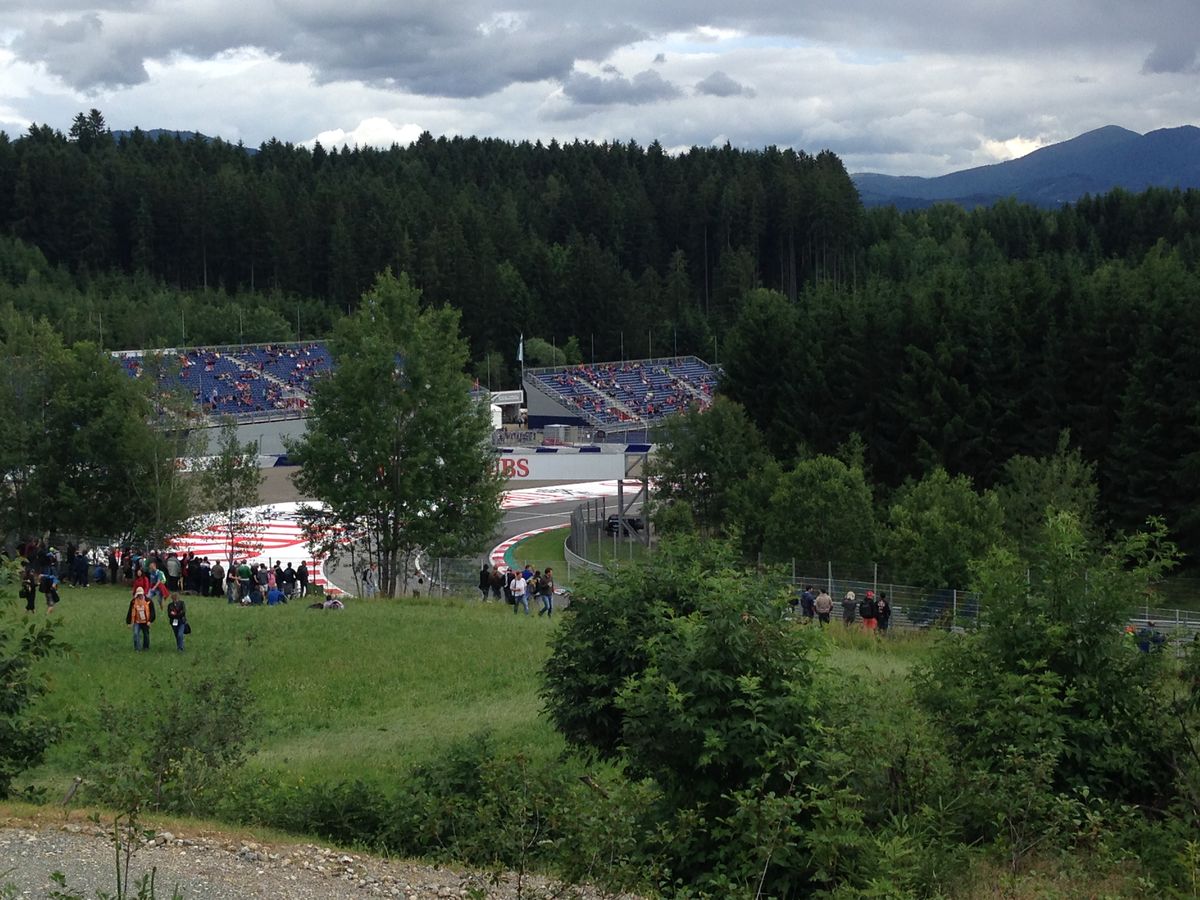 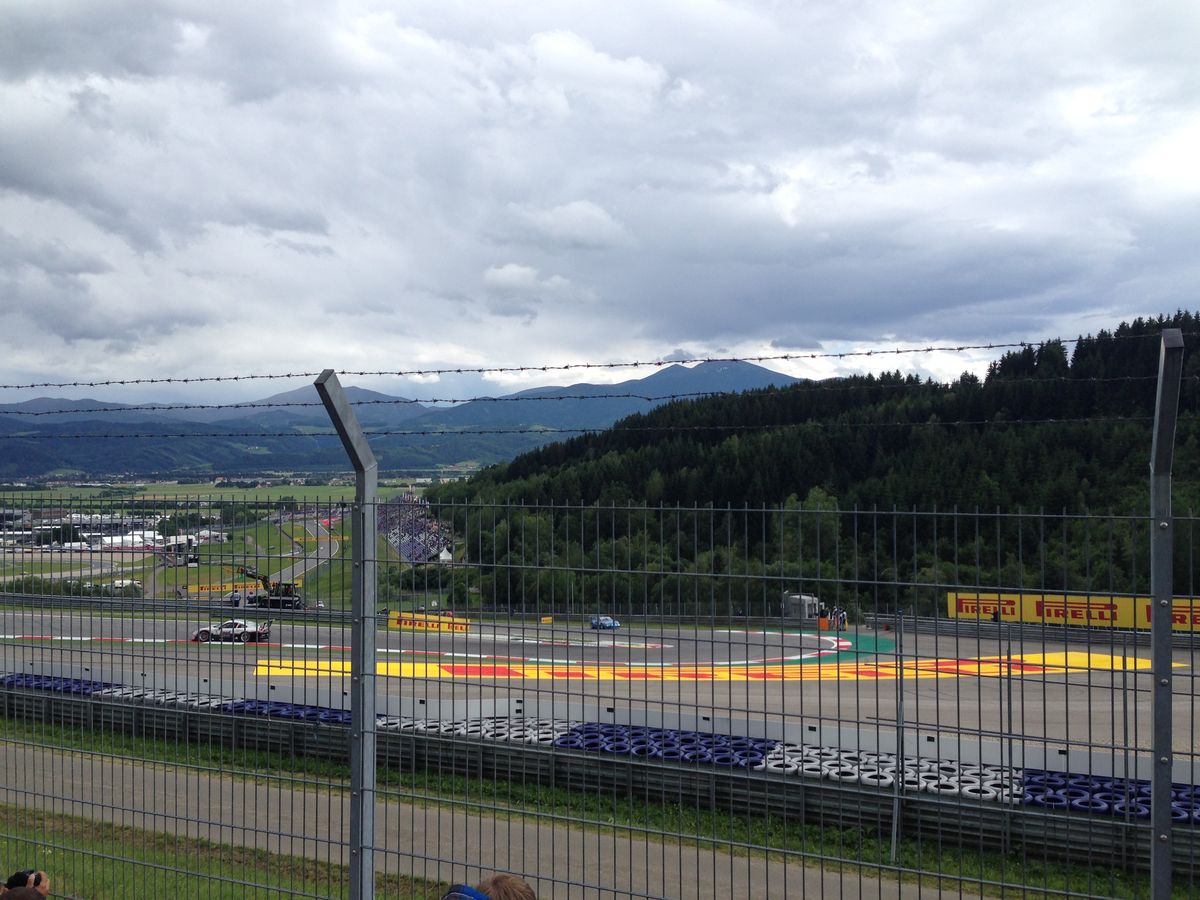 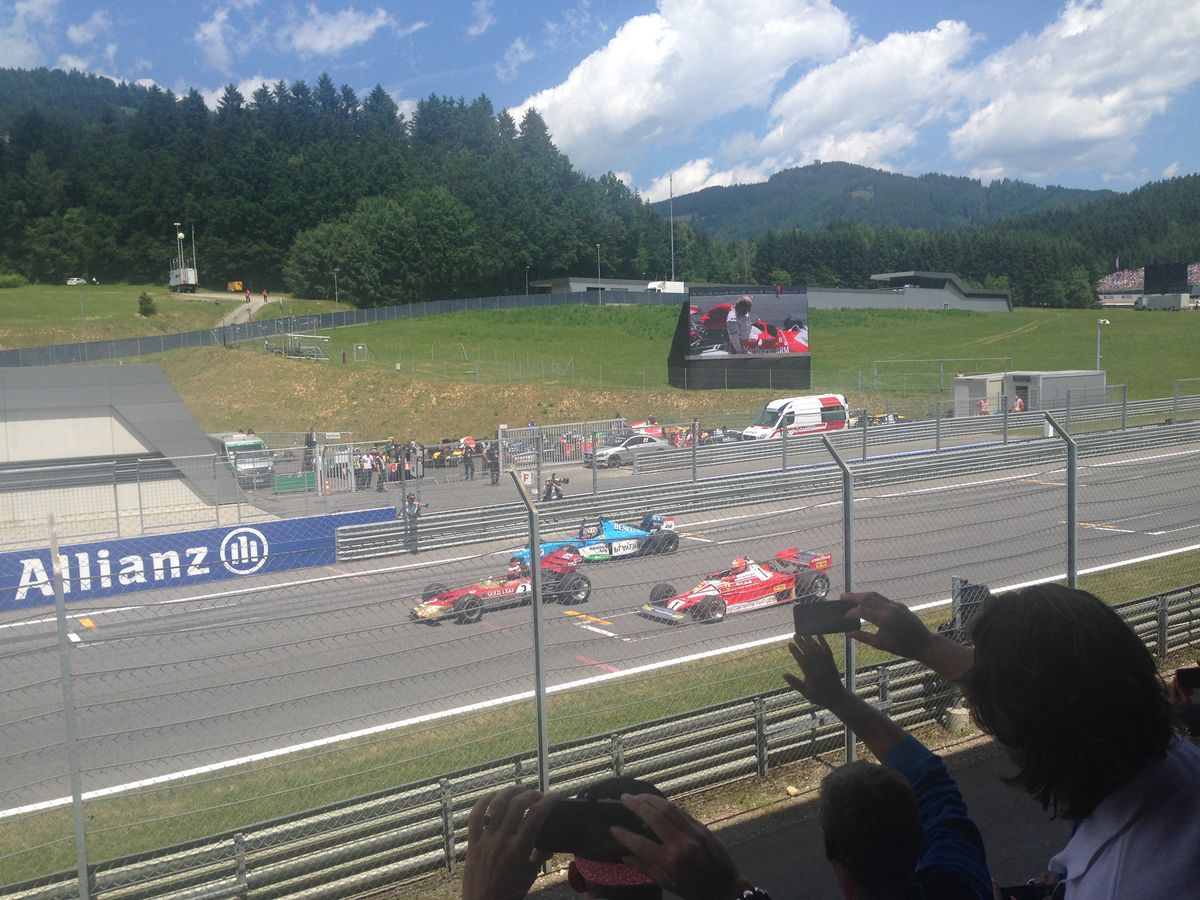 Is it still loud enough?

Yes. I don't know if it has something to do with the construction of the grandstand at the Austrian GP, but it was still loud. Not as loud as GP2 or GP3 but people still had smiles on their face when they came to the circuit and heard the cars for the first time.

In the late afternoons and early mornings it was no problem to take a seat or watch from different places and seats than your own. So after the autograph sessions on Saturday we walked back to the start-finish grandstand to sit in the sun. This was right at the time when the track familiarisation for the legends parade started. So we were lucky to see the first rounds of Gerhard Berger in his old Ferrari, Niki Lauda in his 1976 Ferrari, Helmut Marko in the BRM, Dieter Quester, Karl Wendlinger, Alexander Wurz and Christian Klien. The people left on the stands were excited and not only us – as among others e.g. Toto Wolff came out of the Mercedes Box to watch. 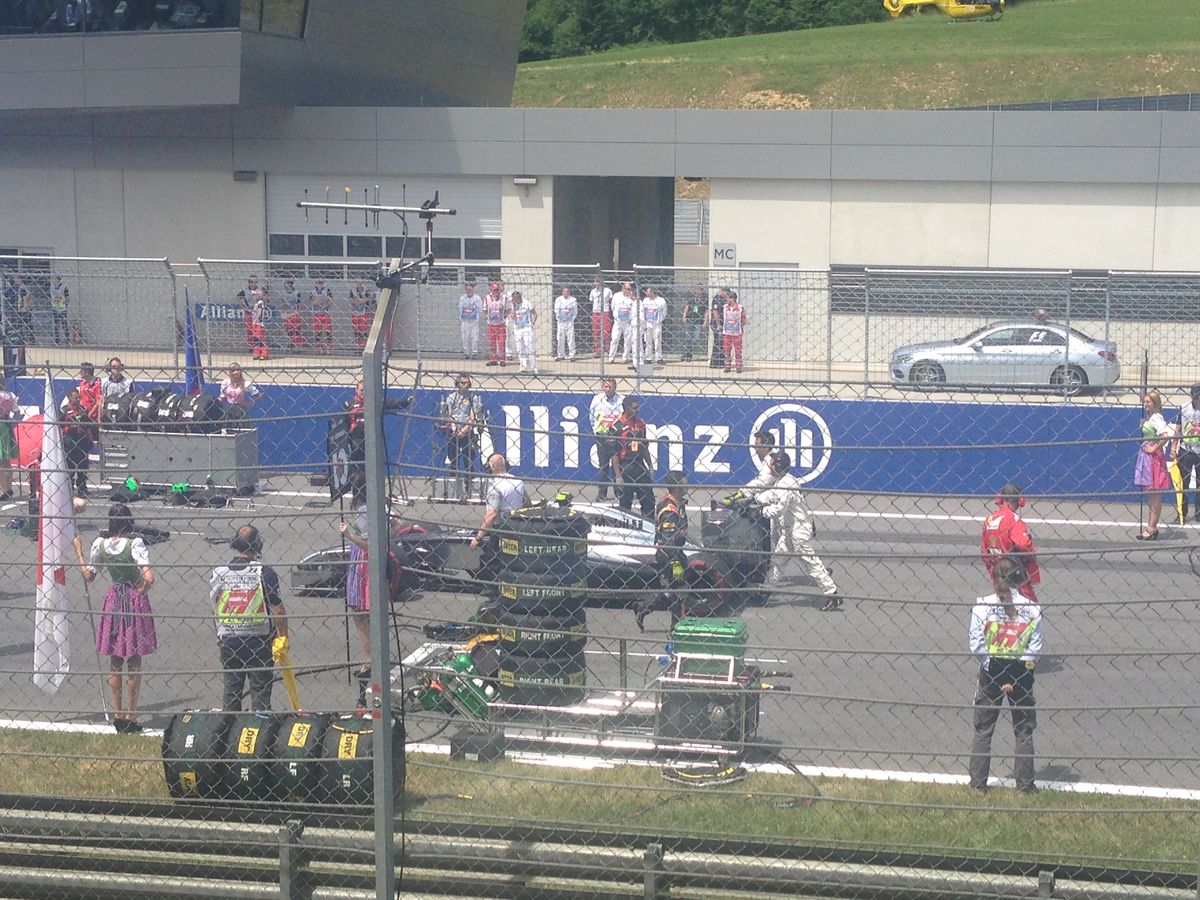 It's a man's world

Looking around my neighbours on the stands I would say the ratio of men to women is about 1:4. Visiting the mostly empty restrooms on the days before the race it gets more than obvious: Formula 1 is a man’s world. I started to look closer at the teams and media and same there. For example ORF – the Austrian broadcaster with Ernst Hausleitner (@ernie1c) and Alex Wurz (@alex_wurz) and the whole team are doing a great and very popular job reporting from the Grand Prix's but not one single woman publicly known is involved. I know this is quite different in the UK with the BBC’s Lee McKenzie (@LeeMcKenzieF1) or Jennie Gow (@JennieGow), but how is it in other countries? Who are the ladies apart from Monisha Kaltenborn, Claire Williams or Susie Wolff (@Susie_Wolff) in the teams? Why are not more women working in Motorsport? I have to investigate more into this and we should enter this manly domain more female.

Of course as an Austrian and as a visitor I am prejudiced, but I think it definitely was an interesting race. I already heard some critical voices about the circuit, but without having yet seen any TV coverage I think it was an exciting race. I guess new terrain is always something special, the short circuit makes it interesting strategy wise and the topography and elevation makes it great to watch on site (which is of course something different on TV). 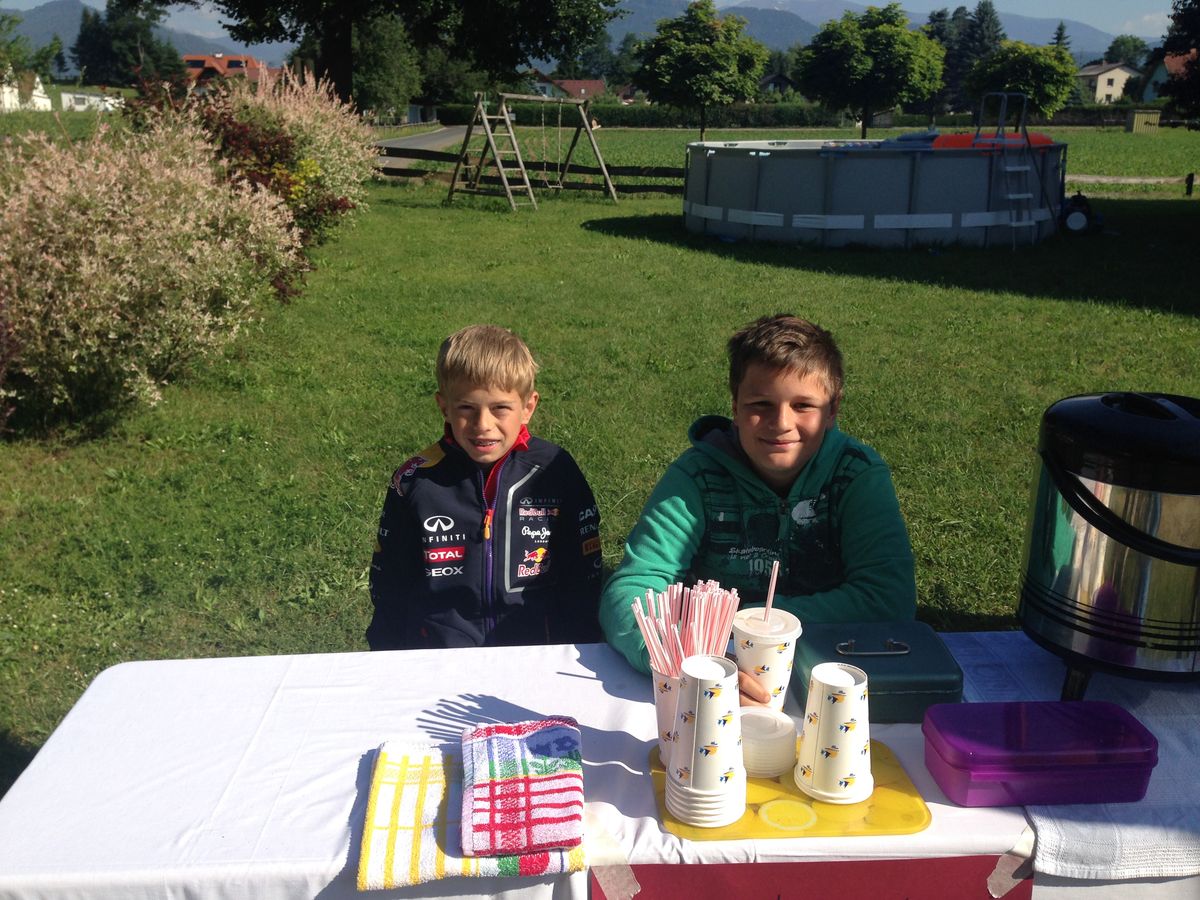 Thursday to Sunday from morning to evening are quite long days and the hungry Formula 1 Fans have to be fed. Facilities at the race track provided Frankfurter Würstel (that's how we call Vienna Sausage) or Debreziner (spicier Frankfurter) – that's it. In the Fan Area you could get some burgers and Schnitzel. My learning, next time I go for a Grand Prix I will cut short on meat the weeks before to be eager for it :-). Yes, food and drinks are not cheap at the circuit, but what surprised me in Hungary last year and was the same in Austria this year, that it is no problem to bring along your own snacks or plastic water bottles. No ridiculous safety checks or anything, all very relaxed. Hope it is it like this at other races as well.

Taking the bike to the race track made all kind of different encounters with two and four-legged friends possible. At a single-lane bridge over this lovely river a black Mercedes and I had to wait for the oncoming traffic to pass. The driver had quite a worried look on his face as I recognised his dozing front-seat passenger. But I did not knock on the window to wake up or take a picture of

Lewis Hamilton and just gave the driver a knowing smile. 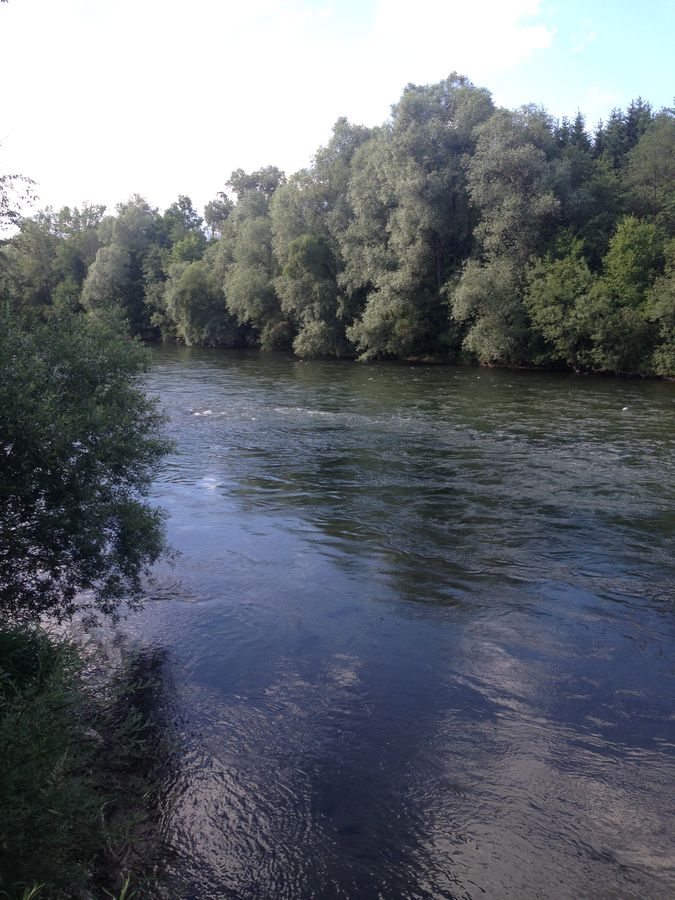 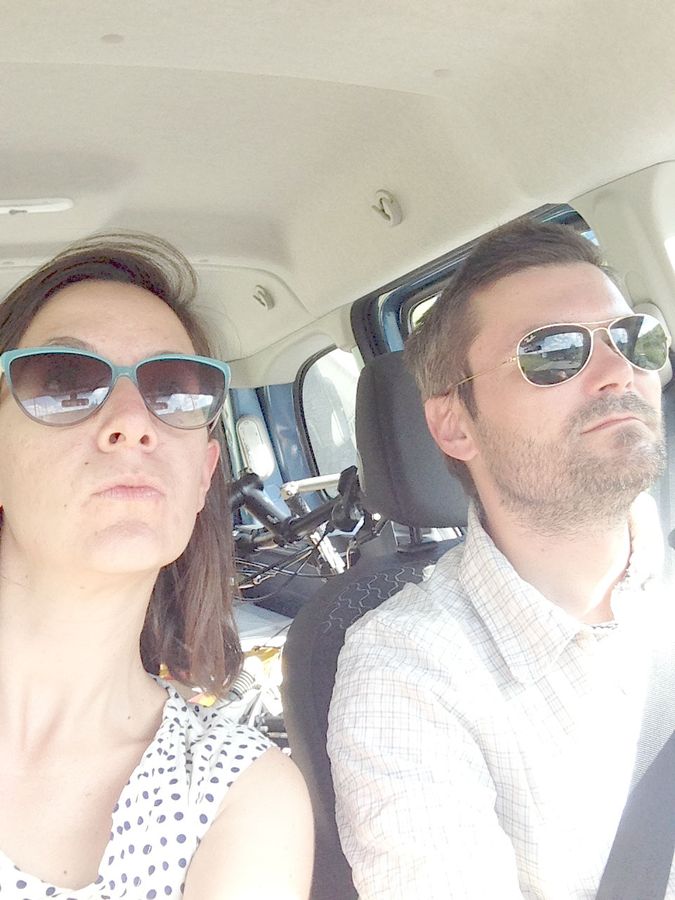 Is F1 nowadays to complicated to watch on site?

Hmmm... it is harder to keep the overview. The inserts on the LED wall are too small to read – if you do not know teams and drivers or their start numbers in e.g. GP2 you cannot really find out who is leading or in what position. It is easier with Formula 1 because you are more used to the cars, you know the helmets – though often changing helmet designs do not make it easier. All practices, qualifying and the races have accompanying German and English live commentary, which are not audible while cars go by. Well, on a short circuit like in Austria. So yes, it is complicated but the live experience compensates for it and yes, this has to be thought about – how often are people willing to pay for the experience?

As McLaren Fanblogger it was obvious to visit the autograph session. Luckily it was McLaren's turn on Saturday. Other team had their sessions on Thursday while we were stuck in the masses to entry the pubic pitlane walk – how can you schedule two attractions for the fans at the same time??? Though we queued at the wrong end of the barrier (exit not the entry – it was a 50:50 chance) it was good to see Kevin Magnussen and Jenson Button still finding nice words after a difficult final practice and qualifying. Such great guys!

It was a great experience and we will come back next year and keep our fingers crossed for McLaren at Silverstone!