1. ALL CHANGE ON THE ENGINE FRONT

The headline change for Formula 1 in 2014 is the introduction of a new engine – or, more specifically, ‘power-unit’.

The sport is changing from a 2.4-litre, naturally aspirated 750bhp V8 – a unit that was introduced to Formula 1 at the start of 2006 – to a 1.6-litre turbo-charged 90deg V6 with a sophisticated and extremely powerful energy recovery system (ERS).

It’ll be the first time turbo engines have been permitted in Formula 1 since they were banned, on safety grounds, at the end of 1988. Incidentally, McLaren was the last team to win in F1 with a turbo, Alain Prost triumphing at the Australian Grand Prix in 1988 – 429 races ago!

However, these new turbo systems are far more sophisticated and integrated than their predecessors. The turbo itself will spin at up to 125,000rpm, and its efficiency and reliability will be a key engineering management issue during the season. These new engines will be limited to 15,000rpm, but they can produce significant power through the use of energy recovery system (ERS, a natural evolution of KERS).

Engine usage is even more tightly regulated in 2014: drivers may now only use five complete units per season – with heavy grid penalties for premature changes to both the V6 and its key ancillaries.

Expect 2014 grands prix to initially boil down into three key segments – an opening charge, to establish position; a consolidatory middle-stint as engines, fuel levels and temperatures are managed; and a final burst as drivers with the machinery and confidence to push, press on to the finish.

These new engines will also have a lot more bottom-end torque, increasing strain on the rear tyres, and consequently emphasising the need for good tyre management. 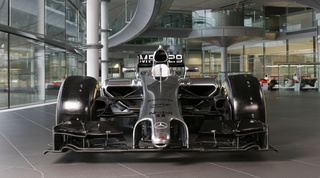 The engine’s scope increases considerably for 2014. Now, it will integrate a number of complementary systems that improve both performance and efficiency:

ERS, in particular, will play a much larger role in contributing to the car’s power than its predecessor, KERS, did.

For 2014, ERS power doubles from 80bhp to 160bhp. Deployment time increases drastically; ERS can be used for up to 33.33 seconds each lap, as opposed to six seconds last year. This will contribute a laptime improvement of over two seconds; by contrast, KERS would only provide a few additional tenths.

ERS will be race-critical. In previous years, drivers could still limp home largely unpunished if they suffered a mid-race KERS failure. Now, an ERS problem will cost drivers seconds every lap, and drop cars out of contention swiftly and cruelly – which makes system-reliability crucial for 2014.

3. CLEVER DRIVERS COULD STAND TO GAIN

While ERS is far more powerful than its predecessor, the system has been defined in the regulations so it isn’t able to harvest and replenish the full amount of available energy over a single lap.

This means strategic harvesting and deployment will play a key role in overtaking and strategy. We’ll see some drivers conserving ERS over one lap, before attacking with their full armory on the next. Equally, we’ll see far more strategic ERS deployment, particularly from drivers whose supply has dwindled, and who are holding off faster drivers behind, while their system is recharging.

Intriguingly, we should see increasingly clever defensive and attacking modes of use develop throughout the season.

The new regulations will really play into those drivers with bandwidth to spare in the cockpit.

For the first time, cars will be limited by a maximum fuel-flow rate during the races – 100kg/hour. Furthermore, since this rate is restricted according to engine speed, it has a direct effect on the power output of the engine – effectively flattening the curve in the higher rev range.

Fuel-flow has always previously been unregulated, so this regulation tightens up an area where there had previously been no governance, making it a tricky management task for engineers and designers.

Additionally, there is now a 100kg fuel-weight limit (cars previously ran with a maximum load of around 160kg) – so fuel management will become even more important.

Drivers will need to manage fuel, with four to five races where fuel consumption could be absolutely critical. At all races, teams will be fuel-saving and monitoring throughout.

5. RELIABILITY WILL BE CRITICAL

It can’t be stressed enough that the 2014 regulations are probably the biggest and most daunting set of changes that F1 has ever witnessed.

Teams will only bring all this cutting-edge and untried technology to the track for the first time in January, and have just 12 days’ running to get it race-ready in time for Melbourne.

With both performance and reliability utterly dependent on mileage, getting the package to run satisfactorily will be critical. Managing that equation will be a critical balancing act for engineers.

We’ve become accustomed to almost bulletproof reliability in Formula 1, but that’s all set to change. We could even see a return to the reliability levels witnessed in the 1980s, when only a handful of cars made it to the finish line.

The prospect of reliable yet less-competitive cars perhaps gaining an early foothold in the championship as faster cars falter is tantalising... 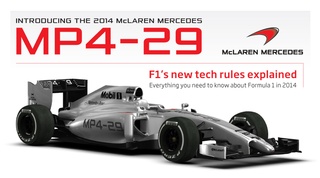 Any wide-reaching regulatory change brings a raft of innovative and different solutions. So, in tandem with the quest for reliability, all the teams will be facing F1’s steepest-ever learning and development curve.

In Formula 1, this ordinarily means that the proliferation of different systems on display at the start of the season will rapidly narrow as the cleverest and most effective solutions come to the fore.

As in 2009, the last time the F1 rules were significantly altered, we could well see a season of two halves – the first half dictated by the team that enjoys the most productive winter; the second by the team that most diligently and effectively develops its car during the early to mid season.

It also means winter testing could be more of a series of reliability-proving runs before performance is applied during the early races. As such, speed out of the box could be less important than in previous years.

7. CHASSIS – SAFER THAN EVER

These are primarily safety-driven – either through reducing downforce to scrub off speed, or by changing impact areas to reduce the risk of cars being launched into the air when they collide.

This year, the front wings are narrowed by 150mm – this makes them less susceptible to damage, but creates new issues for the aerodynamicists, who’ll have to re-route important airflow around the front tyres.

The chassis around the driver’s legs and feet is now significantly lower – due to a regulated drop in maximum height at the front bulkhead. Chassis nose-height is lowered even further, resulting in some novel structures at the front of the car in order to meet compliance.

At the rear, and in tandem with new exhaust regulations (below), the traditional lower beam-wing has been outlawed and the main-flap made shallower – both will have a significant effect on downforce levels.

One of the small knock-ons of all these engine and chassis changes is the increase to the weight limit – it goes up from 642kg to 690kg.

Expect to see an initial variety of front-wing designs slowly converge as teams react quickly to define the most optimal configuration. This will be a real hotbed of activity in 2014 as the front wing is a critical flow-conditioner for the whole car.

After four seasons largely defined by the use of exhaust blowing to produce additional downforce, the 2014 regulations conclusively remove its exploitation by stipulating a radically different exhaust exit point.

It will place less emphasis on a single, key performance solution, hopefully broadening the net for innovative engineers and designers to bring performance to the car through a variety of different areas. That variety could also bring spice and unpredictability to the racing – until another team finds the next performance breakthrough, of course…

McLaren has been using a seven-speed ’box since 1999, but Formula 1 goes a step further in 2014 with the introduction of eight-speed transmission. Last year, teams had to specify 30 ratios for use across the whole season; this year, the regulations are tightened even further – teams can only nominate one set of eight ratios for the whole season. As a concession for 2014 only, the regs allow teams one opportunity to re-nominate those ratios during the year.

Gearbox life has also been extended – from five races to six.

Not too much – it’s primarily for cost-saving purposes.

10a. WHAT DO POINTS MAKE? PENALTIES!

The driver penalty has been overhauled for 2014 to make it both more consistent and more stringent. Infringements will carry penalties of between one and three points; and if a driver accumulates more than 12 points he will be banned from the next race.

Penalty points will remain on a driver’s licence for 12 months.

What this means for the racing is…

Serial transgressors will face stricter punishment than before, although the exact nature of the penalties has yet to be fully revealed.

10b. WHAT DO POINTS MAKE? ER, MORE PRIZES THAN BEFORE…!

One controversial addition for the new season is the incorporation of double-points at the final race of the season – a move intended to help the championship go down to the wire. With 50 points on offer for victory, and a mighty 86 available in the constructors’ championship, expect to see more than a few happy (or utterly miserable) faces in the Abu Dhabi paddock on Sunday evening…

Another novel change for 2014 has been an overhaul of the car/driver numbering system. Drivers are now at liberty to choose their own unique numbers, which they’ll carry through their careers. Jenson has chosen #22 and Kevin #20.