After the madness that was May, we woke up on 1 June feeling refreshed. The sun was shining on the McLaren Technology Centre, the birds were singing, and there was a cool breeze in the air. There was also the excitement of another mad month ahead. You see, the racing calendar waits for no one and eight rounds in, we're full steam ahead.

Street circuit season continues as we switch from Monaco to Azerbaijan after a weekend off from Formula 1 racing spent on our favourite pastimes: combing through the data and racking up the miles in the simulator.

The Circuit de Monaco and the Baku City Circuit may both be street circuits, but it's far from a copy and paste job. To explain why, we've pulled in the expertise of Lando Norris, Daniel Ricciardo and Team Principal Andreas Seidl. We've also sieved through the key stats and whittled down our list of what to watch for.

“I’m excited to be heading to Baku! It’s cool to be at another street circuit and last year’s race showed that anything can happen. It will be great to see what we can do in the new cars around this unique circuit. I’ve had a points finish both times I’ve raced at this track so hopefully I can keep that up and get some more points for the team this year.

‘I’m feeling back to usual myself after the weekend off and I’ve recovered well after a tough two weeks. I’m excited to see what I can do going into this next double header, so let’s get stuck in!”

“I’m a big fan of the Baku Circuit, it has some exciting features and it’s always a fun battle heading into Turn 1, where you often end up with three cars running side by side. There’s a couple of different ways we can play it strategy-wise this weekend but track position for lights out on Sunday will be important, even with the overtaking opportunities the longest straight on the calendar offers. There’s always an element of unpredictability at street circuits so I’m ready to take advantage of any opportunities that come my way. Whilst Monaco wasn’t quite what I wanted it to be, I’m feeling confident that we can keep pushing ahead and make the most of this weekend.”

“The team is feeling prepared for Baku after the European double header. We’ve been busy over the last week analysing the data we’ve gathered on our new upgrades, ensuring they’re fully optimised. This has also been an opportunity for the team to rest up and get ready to go for another set of exciting back-to-back races.

“While both Baku and Monaco are street circuits, both require a very different approach to setting up the car. Its long straight, which sees the highest top speed on the calendar, demands a reduced downforce setup, which is rare for a street circuit.

“What remains the same, however, is that any mistake is punished at a street circuit. That presents both challenges and opportunities, which I’m sure will create an exciting race. Let’s keep pushing and maximise this weekend before heading over to Canada.”

The Baku City Circuit still feels like a relatively new F1 venue, but at five races old, it's growing up fast. Born in 2016 under the European Grand Prix name, it became known as the Azerbaijan Grand Prix from 2017.

As a team, we've performed pretty well in all four races since it officially became known as the Azerbaijan GP, taking six points finishes from a possible seven. Lando is responsible for two of those, finishing P8 in his first F1 race at the circuit in 2019 before bettering that last year with a P5 - our best finish at the track to date.

Daniel, meanwhile, was the winner of that first Azerbaijan Grand Prix in 2017, showing his street-circuit skills with that famous three-car overtake down the straight on his way to victory for Red Bull in 2017. 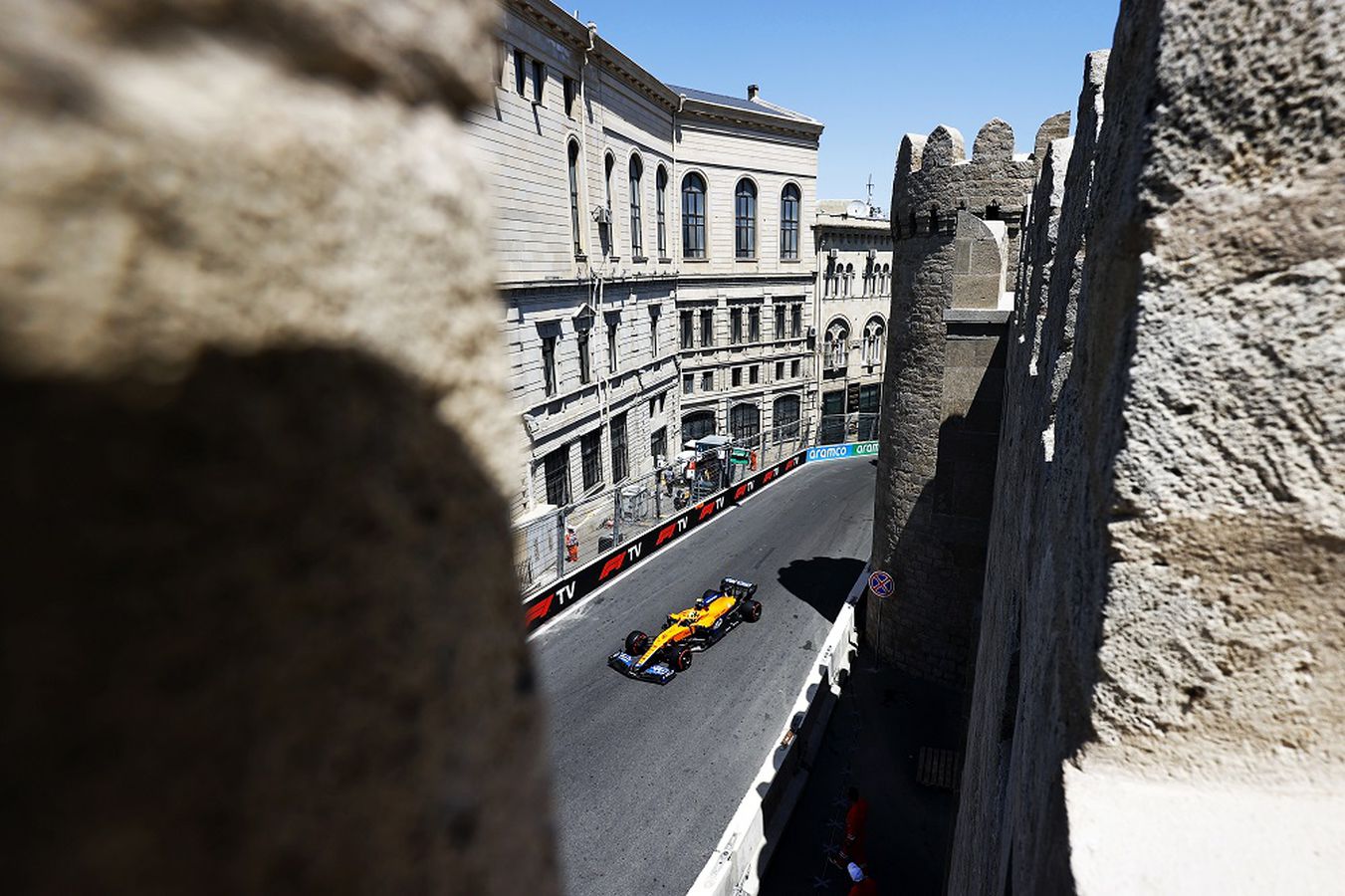 Azerbaijan is often referred to as 'The Land of Fire' and you can expect to see some hot overtakes.

A brainchild of esteemed designer Hermann Tilke, the Baku City Circuit is a street circuit, like Monaco, that isn't anything like Monaco. As DR says above, and proved in 2017, three-wide battles are not uncommon heading into the first turn. You'd not see anything like that in the principality, where the tight and twisty streets focus on a driver's technical ability more than their overtaking prowess.

Featuring a 2,200m straight, there's plenty of time for drivers to put their foot down, making the track a great place to test out just how quick this new generation of cars can go. 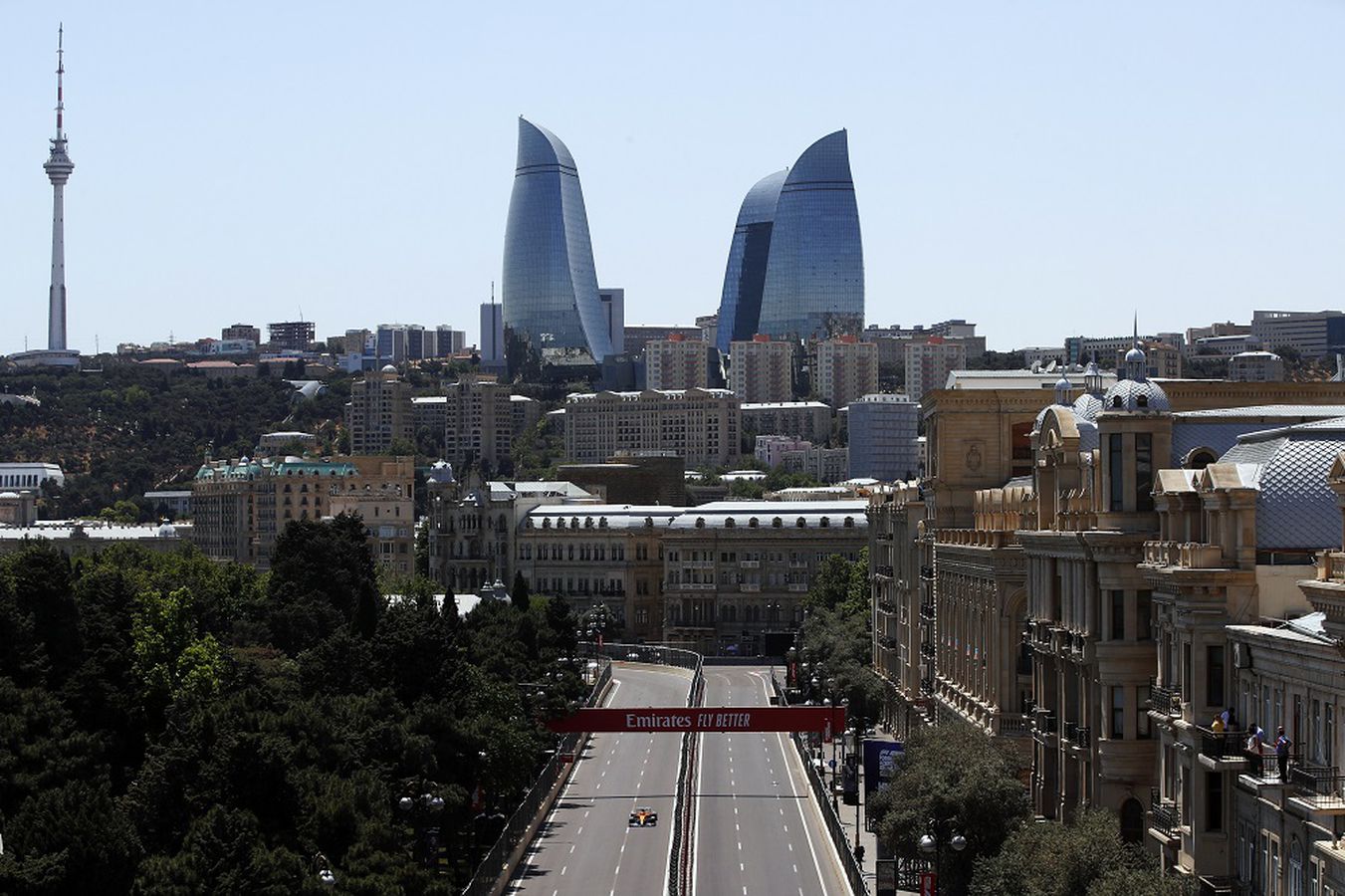 But that isn't to say that Baku isn't tight and twisty at all. The castle section is particularly thin and winding, with only 7.6m separating the walls at Turn 8, making it one of F1's narrower corners. Make a mistake there, while bending through the medieval city walls, and you'll be punished. But for the most part, the 6.003km long circuit is extremely fast and overtake friendly.

There's also the backdrop. Passing through some of the oldest and most historic parts of the city, the views while navigating the Baku City Circuit can be pretty awe-inspiring. Snaking through the castle section, between medieval walls, can feel like stepping back in time, while the panoramic views of the Caspian Sea and the city's modern skyline are equally eye-catching.

Summer is right around the corner and if, like us, your warm-weather wardrobe is in need of a refresh, then what are you waiting for?

We might be biased, but we think that Papaya is perfect for the new season. Kickstart your new look with a replica polo, designed with aerated fabric to ensure you look and feel great.

You could pair your polo with some fresh shades from SunGod – we recommend the black Sierra's, fitted with papaya lenses and the McLaren speedmark. Finally, cap off your summer style shake-up with one of New Era's papaya McLaren hats.

All the rumors are true, yeah: MTC tours are back.

McLaren HQ has always been a top-secret facility, home to our greatest minds and their most brilliant creations, but over the last couple of years, Covid-19 protocols have prevented us from allowing even our trusted fanbase a peek behind the curtain.

But now that wait is over, we've been given the green light to let a lucky few of you in. If you're one of our faithful McLaren Plus members, we're confident you can keep our biggest secrets, so we're giving you the chance to win one of 12 pairs of tickets for an interactive tour of our home.

Walk the famous MTC Boulevard, get up close and personal with our most famous machinery and let us take you on an unforgettable behind the scenes experience.

Become a McLaren Plus member to make sure you're the first to know when the tour giveaway opens.

In association with Hilton, get the best travel tips for Baku

"We'll rest, reset and get ready to go again"

Bruce McLaren and his cars