12 pitstops that changed the face of a race

Moments that influenced, improved or changed our fortunes during a grand prix

12 pitstops that changed the face of a race

Moments that influenced, improved or changed our fortunes during a grand prix

A Formula 1 pitstop lasts for just a couple of seconds – but can have an absolutely decisive effect on a race. Get it wrong, and you’ll quickly tumble down the order; get it right, and you can make up positions far more effectively than you ever could on track. Achieve the priceless triple-whammy of timing it perfectly, executing it swiftly, and making an inspired tactical choice on tyres, and you can watch a surefire defeat turn into a victory.

We know – at McLaren, we’ve seen it and done it.

Here are the 11 most significant pitstops – chosen by us at McLaren – that influenced, improved or changed our fortunes during a grand prix. 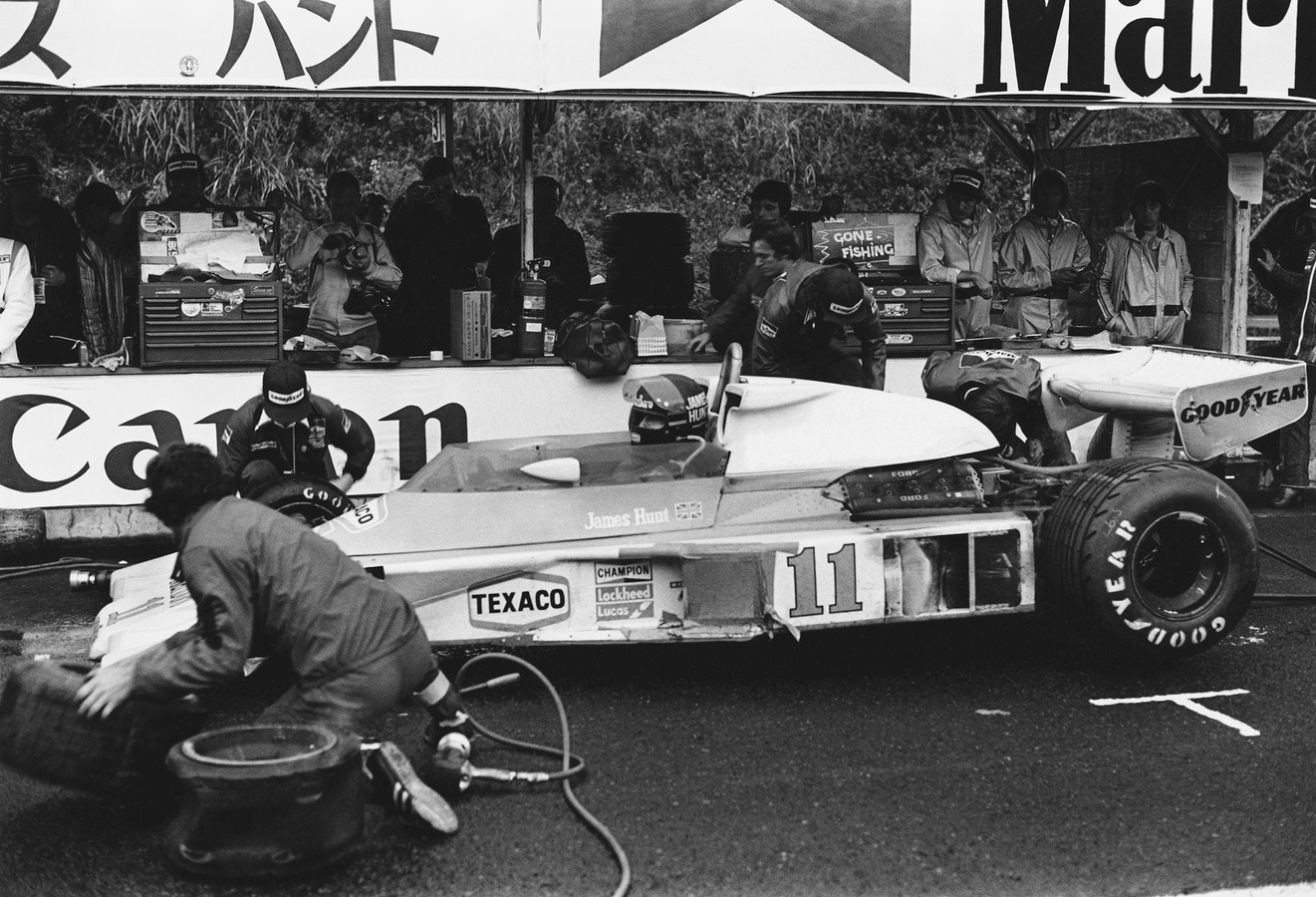 On a wet but drying track, it suddenly became imperative for every driver to manage their tyres to the end – even moreso for James Hunt, who needed third position to claim the world title.

Team manager Alastair Caldwell takes over the story: “We hung out a pit board with the words ‘cool tyres’ on it and [team-mate] Jochen immediately splashed over into the puddles to look after his tyres. But James steadfastly drove on the drying line – I was so angry with him.”

Hunt’s bullheadedness cost him dearly – he wore two tyres down to the tread – and he had to make a last-ditch pitstop. He rejoined in eighth, but battled through to take third at the flag. The pit crew’s swift work had enabled him to do enough to snatch the world title. 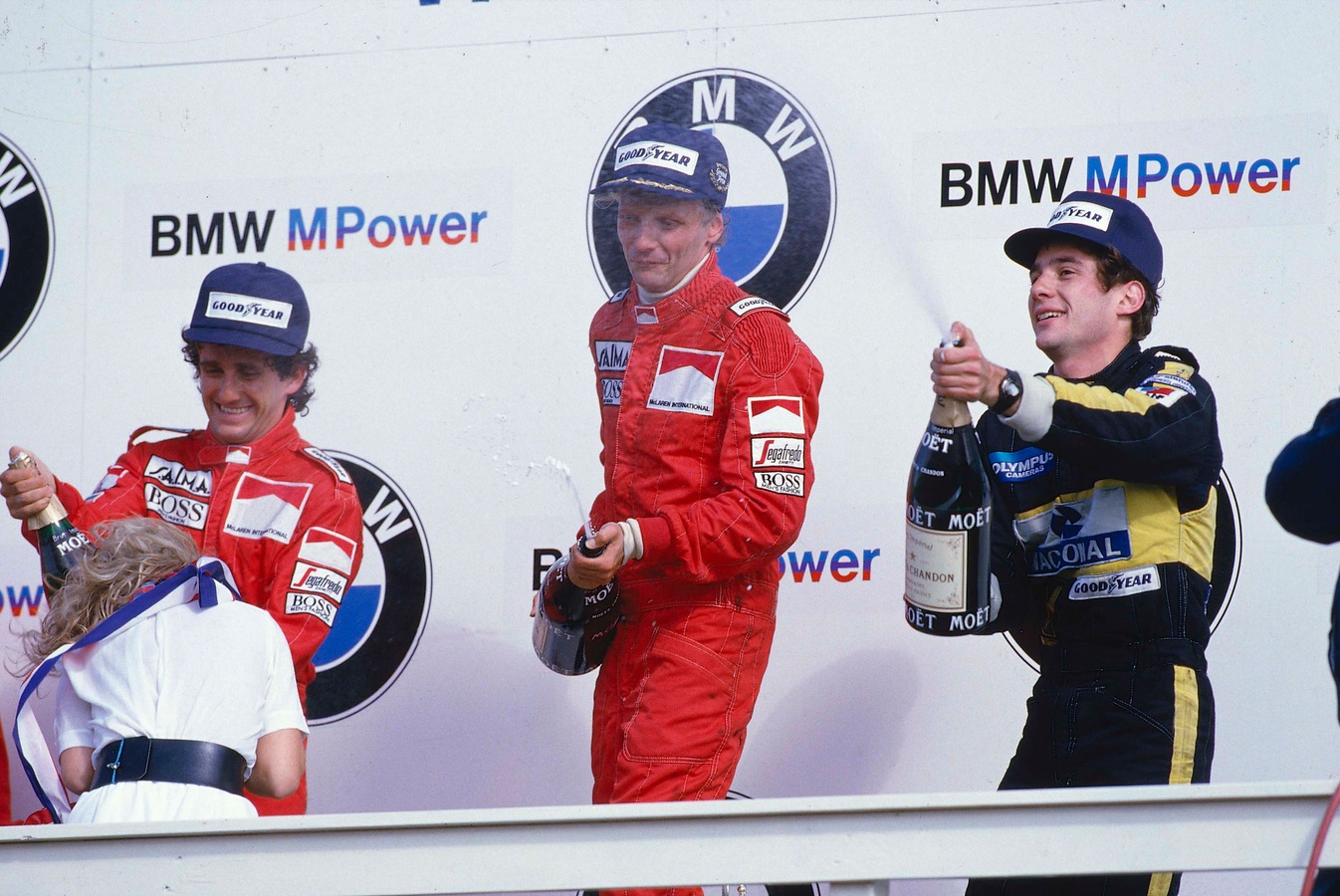 The 1985 season offered pretty slim pickings for McLaren’s Niki Lauda. Even worse, Lauda was the reigning world champion, having brilliantly won five grands prix and the world title in ’84, but found that nothing seemed to go his way whenever he was in a position to make good.

That all changed at Zandvoort, Holland, when the Austrian seemed brilliantly revived, and drove with peerless agility and determination to take the very last of his 25 grand prix victories. Critically, Lauda was able to drive home the advantage after team-mate Alain Prost was delayed in the pits.

Okay, so it might not have involved Lauda directly – but it was absolutely pivotal in earning him the final spurs of his great grand prix career. 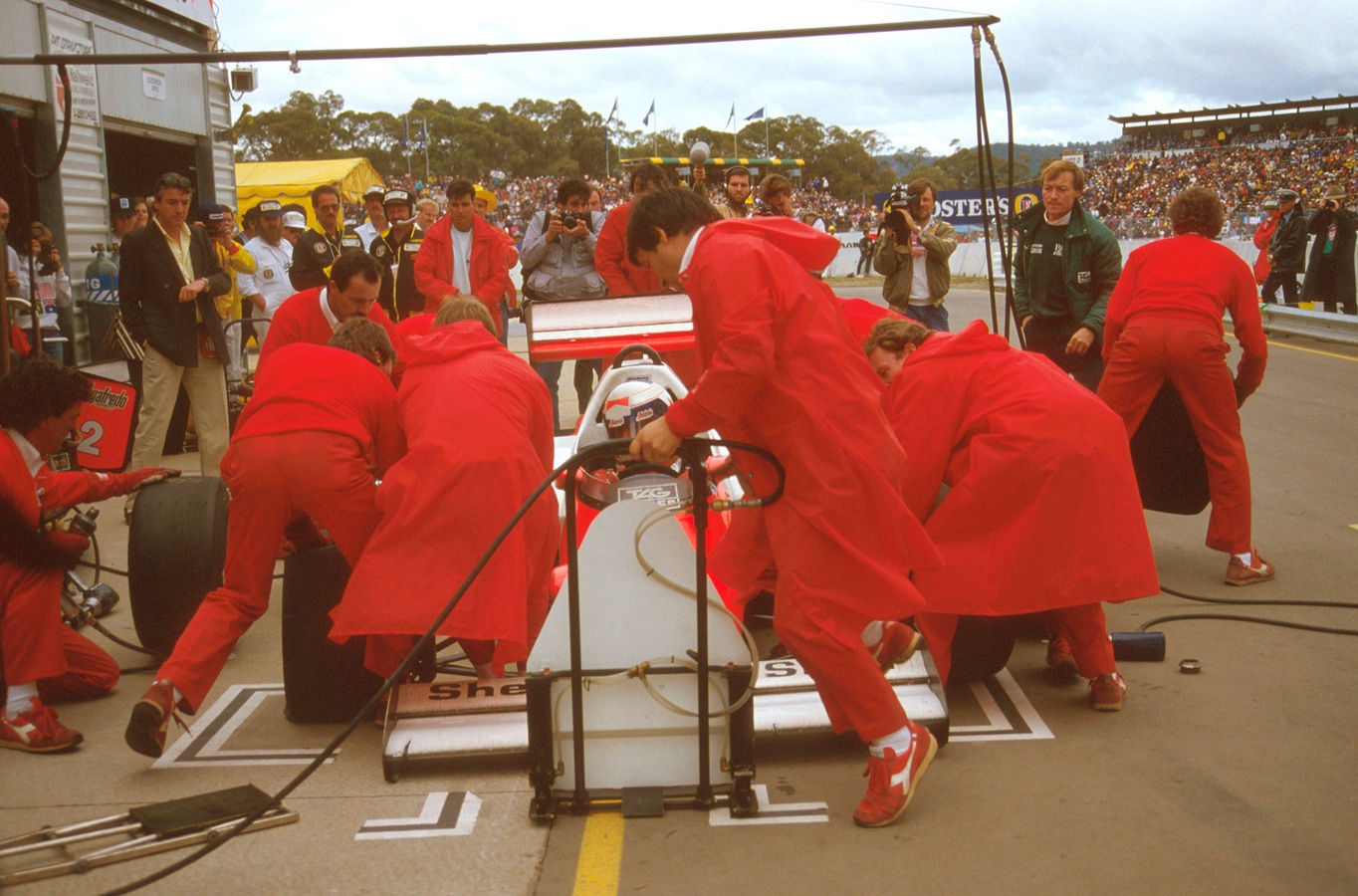 Championship deciders rarely come so stomach-tighteningly dramatic as this: Nigel Mansell (70pts) led Alain Prost (64pts) led Nelson Piquet (63pts). In short, both of Mansell’s pursuers had to win the Australian Grand Prix to take the crown – and even that depended on where the plucky Brit finished.

This was a subtle stop: Alain had sat back during the furious opening laps, but then tripped over Gerhard Berger’s Benetton, requiring a trip to the pits for fresh rubber. A quick inspection of the Frenchman’s wheels convinced Goodyear’s engineers that tyre-life was good for the remainder of the race – only for a high-speed puncture to catapult Mansell into the wall, and prompt Williams to make a precautionary stop for Piquet. Both had been running the softer rubber; Prost had chosen the safer, harder compound, and duly won his second world title… 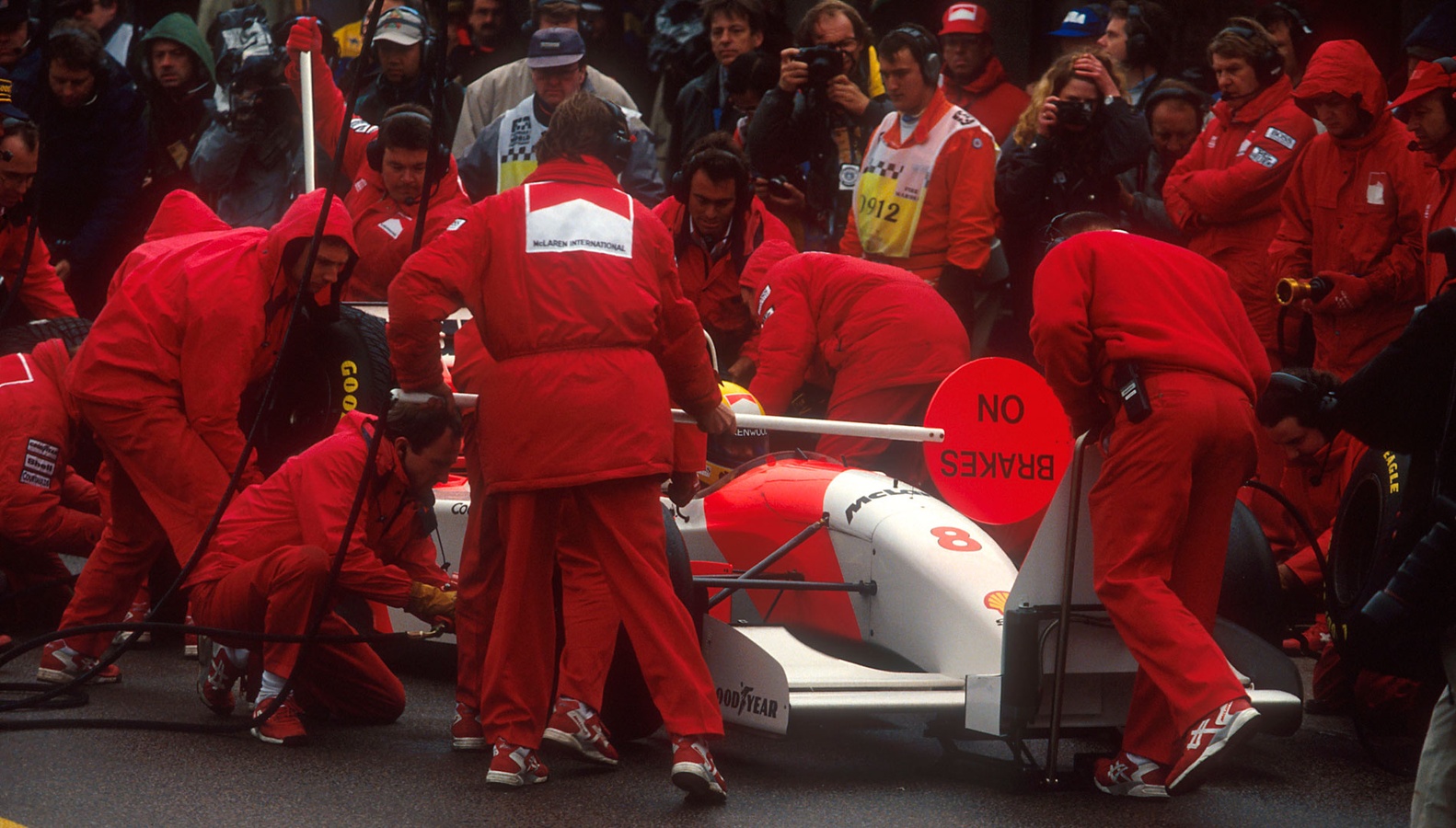 Everybody knows the story of this downpour-affected race at Donington. It was one of Ayrton Senna’s greatest afternoons in a racecar – he drove effortlessly to victory, making everybody else look ham-fisted and flat-footed in the process.

Of course, what everyone remembers about the race is Senna’s mighty opening lap, when he surged through into the lead. What’s often overlooked, however, is the team’s brilliant performances in the pits.

On an afternoon when runner-up Damon Hill pitted six times, and third-placed man Alain Prost no fewer than seven, Ayrton got through it all with just four stops. And he even set the fastest lap of the race after making an inadvertent trip through the pitlane. Not bad! 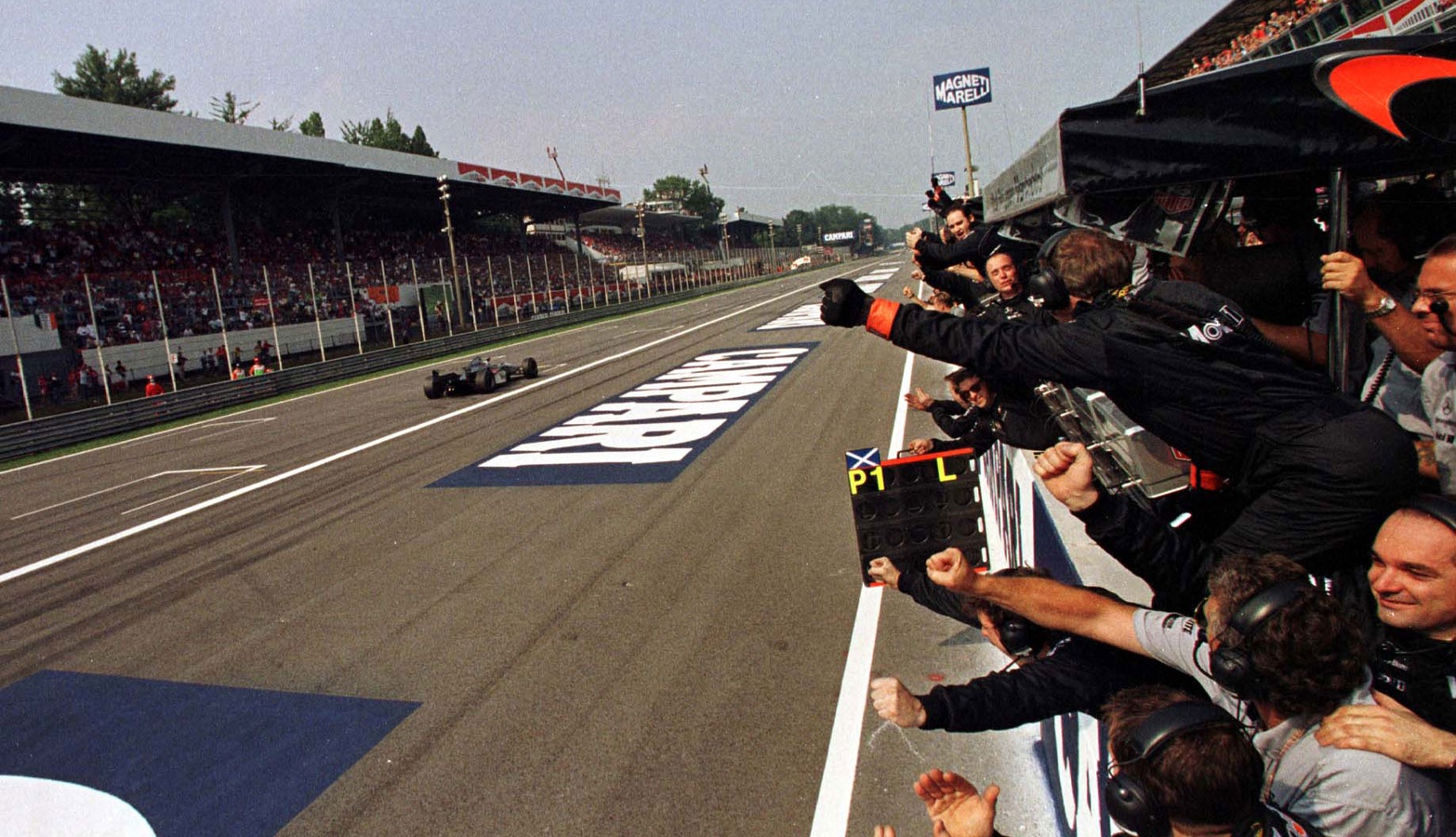 If you’re headed into a grand prix in the full knowledge that the race is simply two flat-out blasts punctuated by a single, defining pitstop, then you better make sure that stop counts!

Such was the case with the 1997 Italian Grand Prix. The race at Monza is usually a high-speed affair that necessitates a one-stop strategy, and that year’s race was no exception.

McLaren’s David Coulthard had run third during the first stint, behind leader Jean Alesi and Heinz-Harald Frentzen. But the stops made all the difference: David vaulted into the lead, and blitzed his way to the flag, taking McLaren’s second-ever victory with a Mercedes-Benz engine. 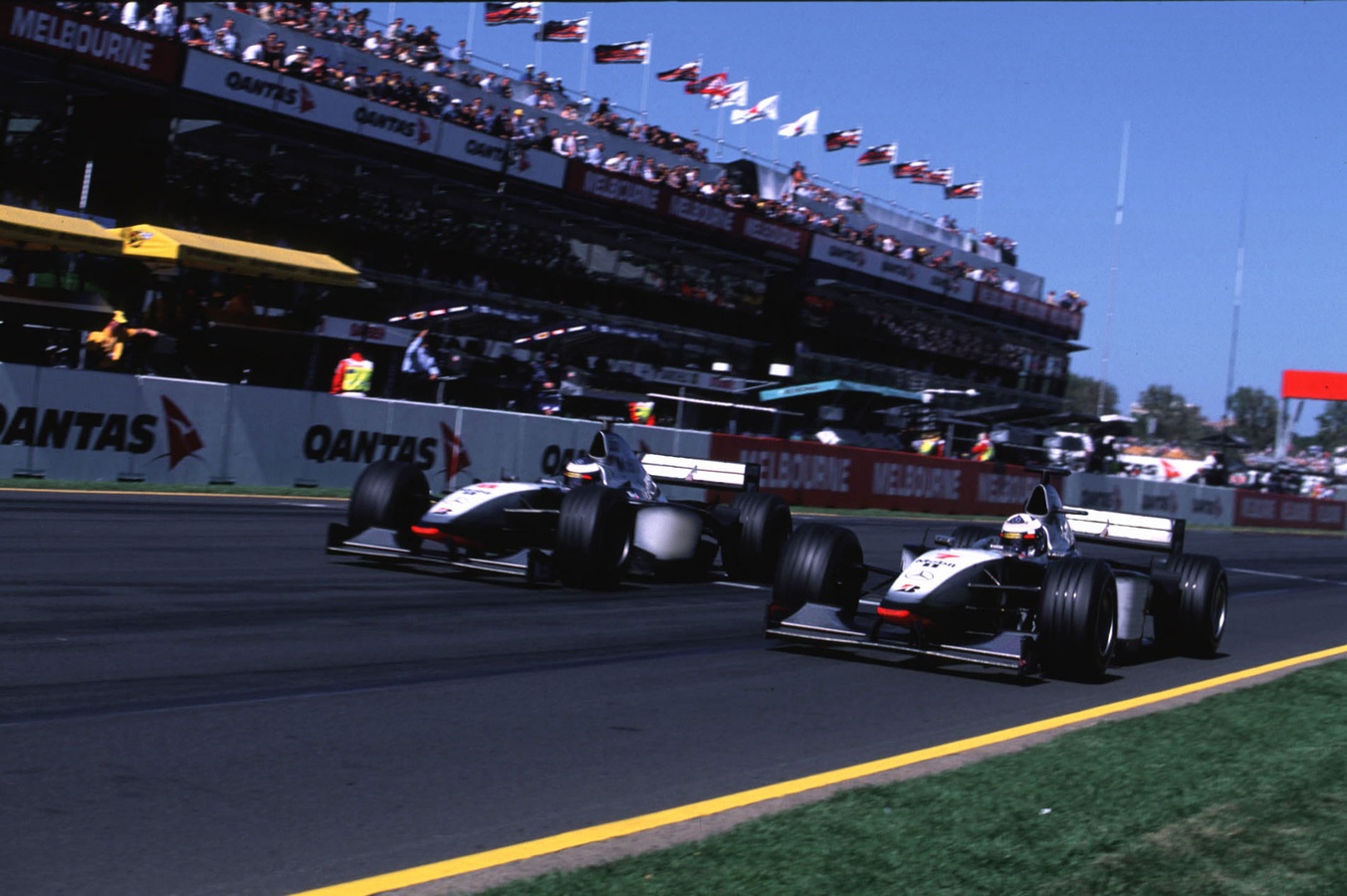 This was a strange one: Mika Hakkinen’s ‘phantom’ pitstop during the 1998 Australian Grand Prix famously lost him the lead – until new leader and team-mate David Coulthard received a ‘phone-call’ from the pitwall instructing him to cede position back to the Finn.

It was a controversial decision – not least because it was the second successive race in which it had happened (Coulthard had also been the subject of team orders in Jerez, in ’97), but also because it enraged punters in the blatant way in which it was stage-managed – along the pit straight two laps from home.

The reasons for Mika’s unscheduled stop have never been made clear – with rumours that a local taxi firm had accidentally commandeered the radio airwaves, somehow convincing the Finn that he needed to box! 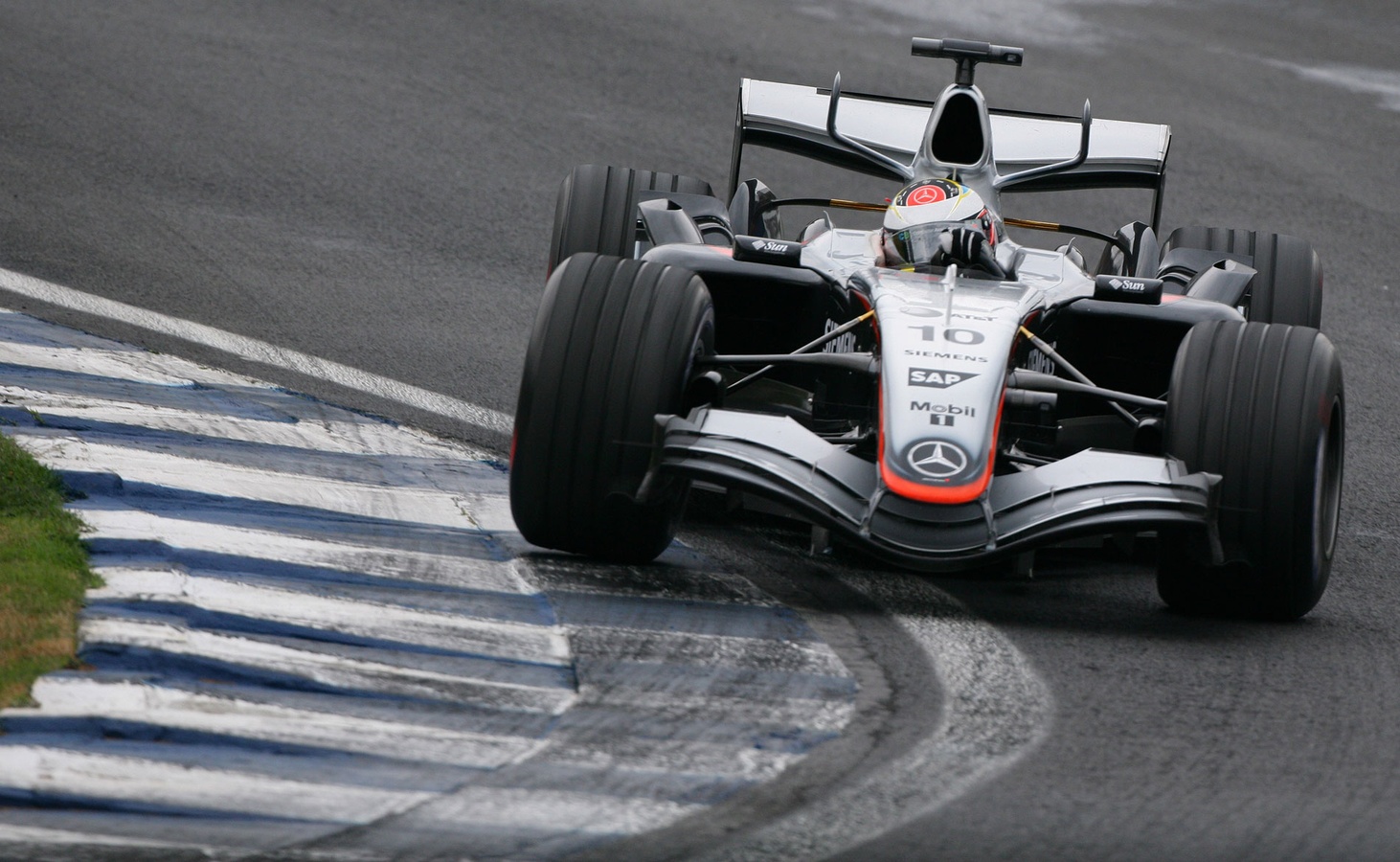 Colombian firebrand Juan Pablo Montoya was racing his team-mate Kimi Raikkonen for the lead as the final stops beckoned. Montoya dived in first, then returned to the track to set a blistering pace on fresher rubber while Kimi took advantage of the lighter fuel-load.

Kimi boxed five laps later and came out narrowly ahead, but Montoya had the bit between his teeth, and swooped around the outside of Turn Four to claim the lead. Montoya’s race engineer Phil Prew remembers: “After that, we told them to just get two cars to the end. Juan Pablo was never going to lose that race. If it had worked the other way and Juan Pablo had been told to back off, he would have ignored us completely! He is still my favourite driver – an absolutely lovely guy.” 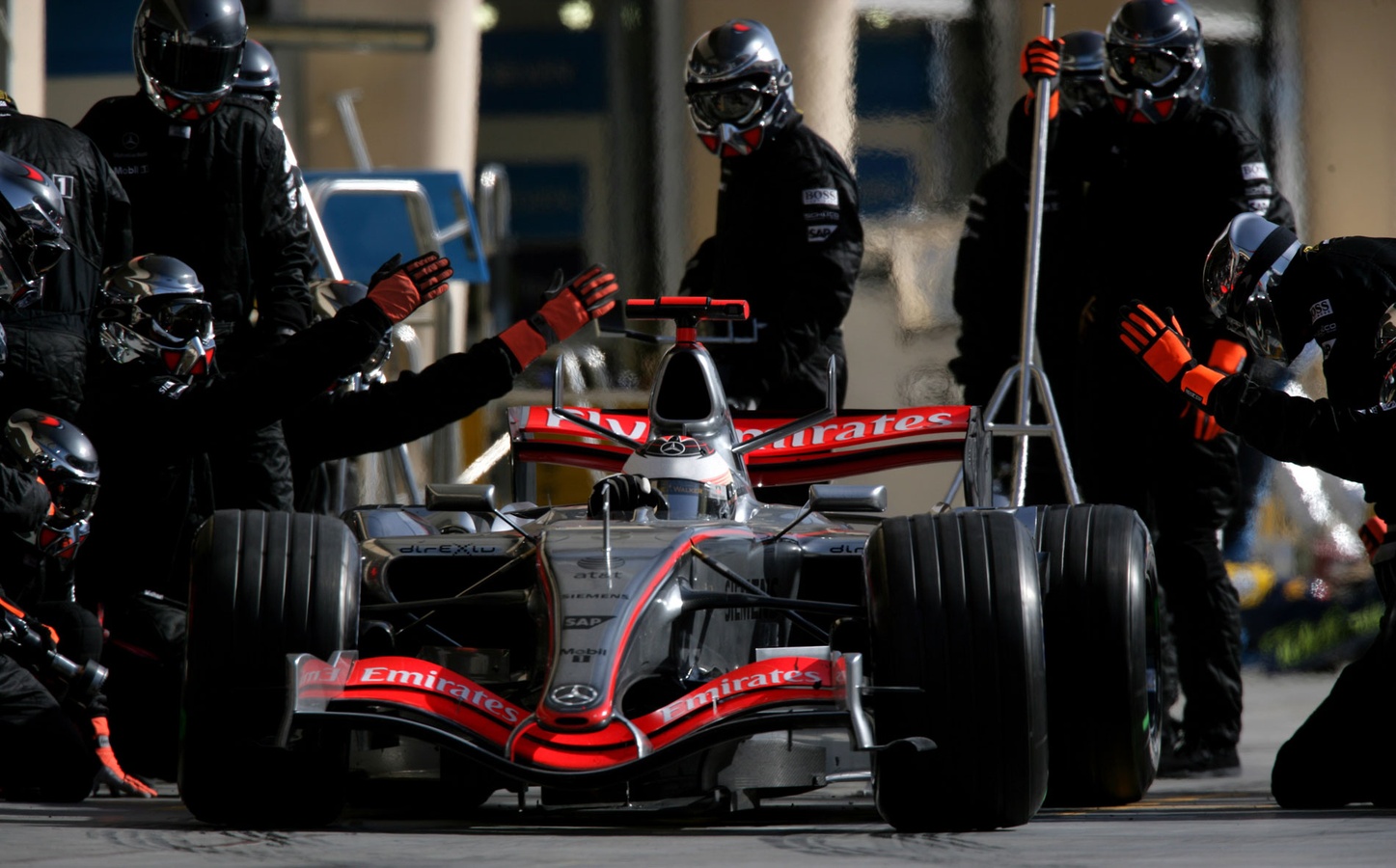 When the rear suspension decided to part company with Kimi Raikkonen’s gearbox during qualifying for the 2006 Brazilian Grand Prix, it looked like the Finn’s race had been effectively run. Unable to set a time, he started stone last, but benefited from a canny change of strategy to carve his way through the field and onto the podium. 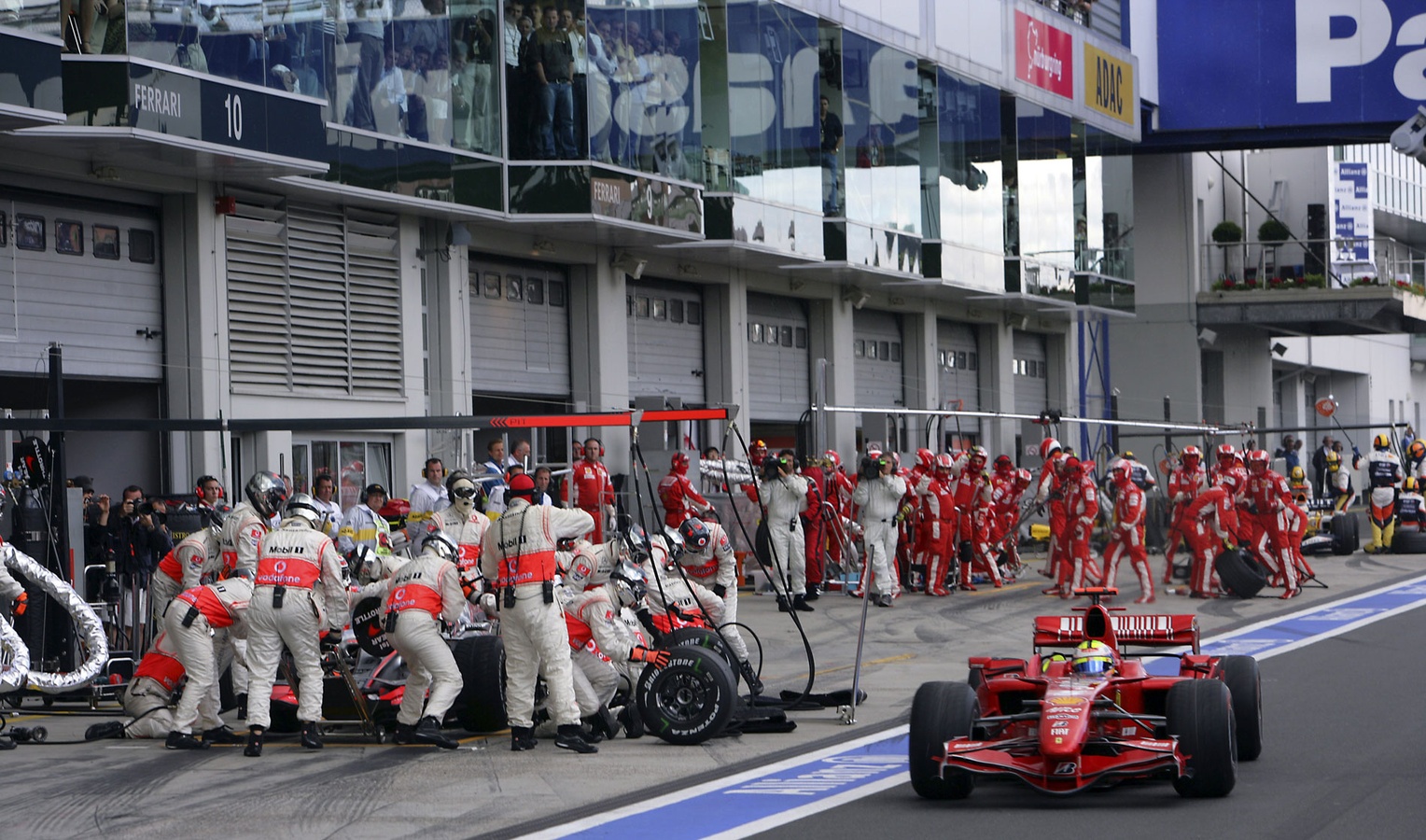 When the rains fall, a keenly timed pitstop can make all the difference. And so it was at the Nurburgring, Germany, for the European (yes) Grand Prix. A first-lap deluge had decimated the field, but as the weather had cleared, the field had reverted to dries, and was slogging round to the end – until another squall hit the track with less than 10 laps remaining.

Critical to Fernando Alonso’s fortunes was his McLaren’s ability to generate heat in the tyre faster than rival Felipe Massa’s Ferrari, who led the race. While the pair exited the pits on wet-weather tyres in the same positions, Alonso was more comfortable in the wet, and quickly muscled past the red car – prompting an angry Latin exchange between the pair in the podium green room afterwards! 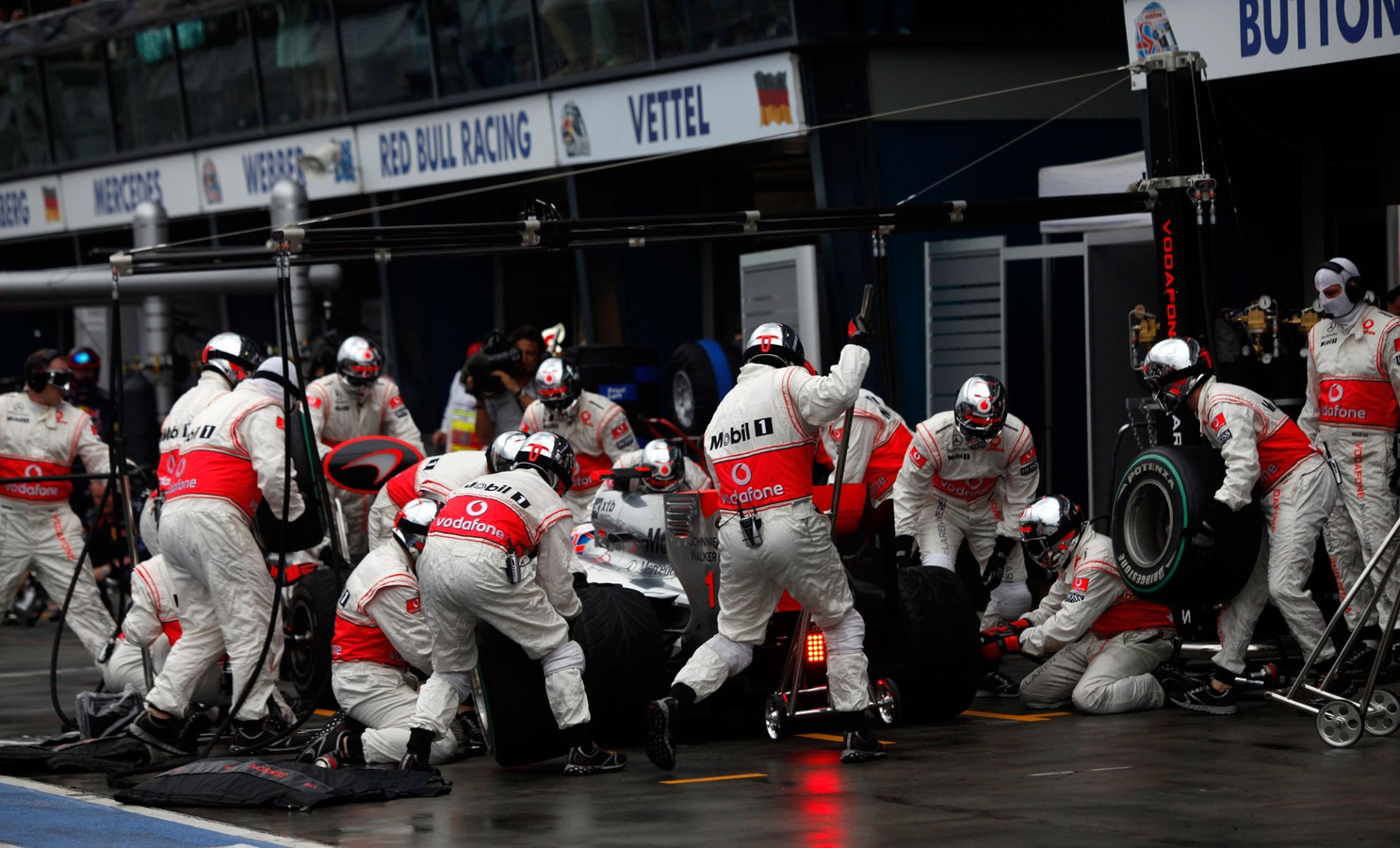 It was on lap six that Jenson Button decided to roll the dice. The track surface around Albert Park was still decidedly iffy – the rain may have begun to dry on the racing line, but there wasn’t a clear path around the whole circuit. It was so hairy, that Jenson momentarily lost it at Turn Three, as he tried to put some heat into his still-cold dry-weather tyres.

That lurid moment was enough to convince the rest of the field that it was still too wet for dries. In fact, it was a false alarm – the track conditions had turned, and Jenson went from last to third within the space of three laps, taking the lead at half-distance to claim his first McLaren victory. That pit call – made by Jenson – had been the pivotal point of the entire race. 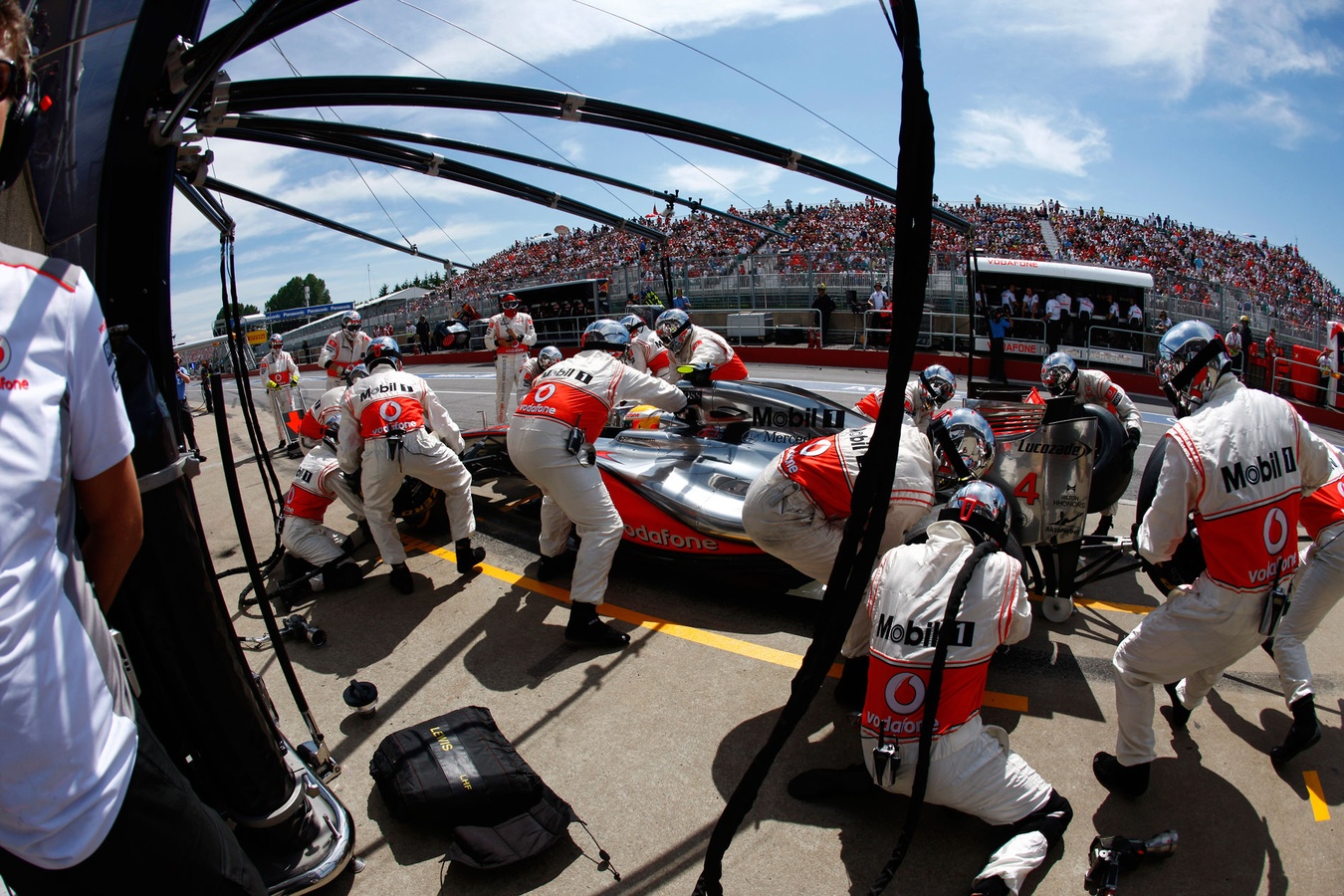 On paper, a two-stop strategy made sense. The one-stoppers would make that initial early switch from Options to Primes, then nurse the harder rubber to the end – but their tyres would be incredibly creaky – and ripe for overtaking – in the dying laps. Faster and better, surely, to box a second time, fit fresher rubber and then pick off the struggling stragglers?

That seemed the better choice, but when Lewis Hamilton boxed with 20 laps remaining, and dropped from first to third, and then saw that nobody had followed suit, it suddenly felt like an awfully embarrassing and vulnerable strategy. But it worked, Lewis was back in front with seven laps remaining and took a sensational victory. Still, this was a nailbiter! 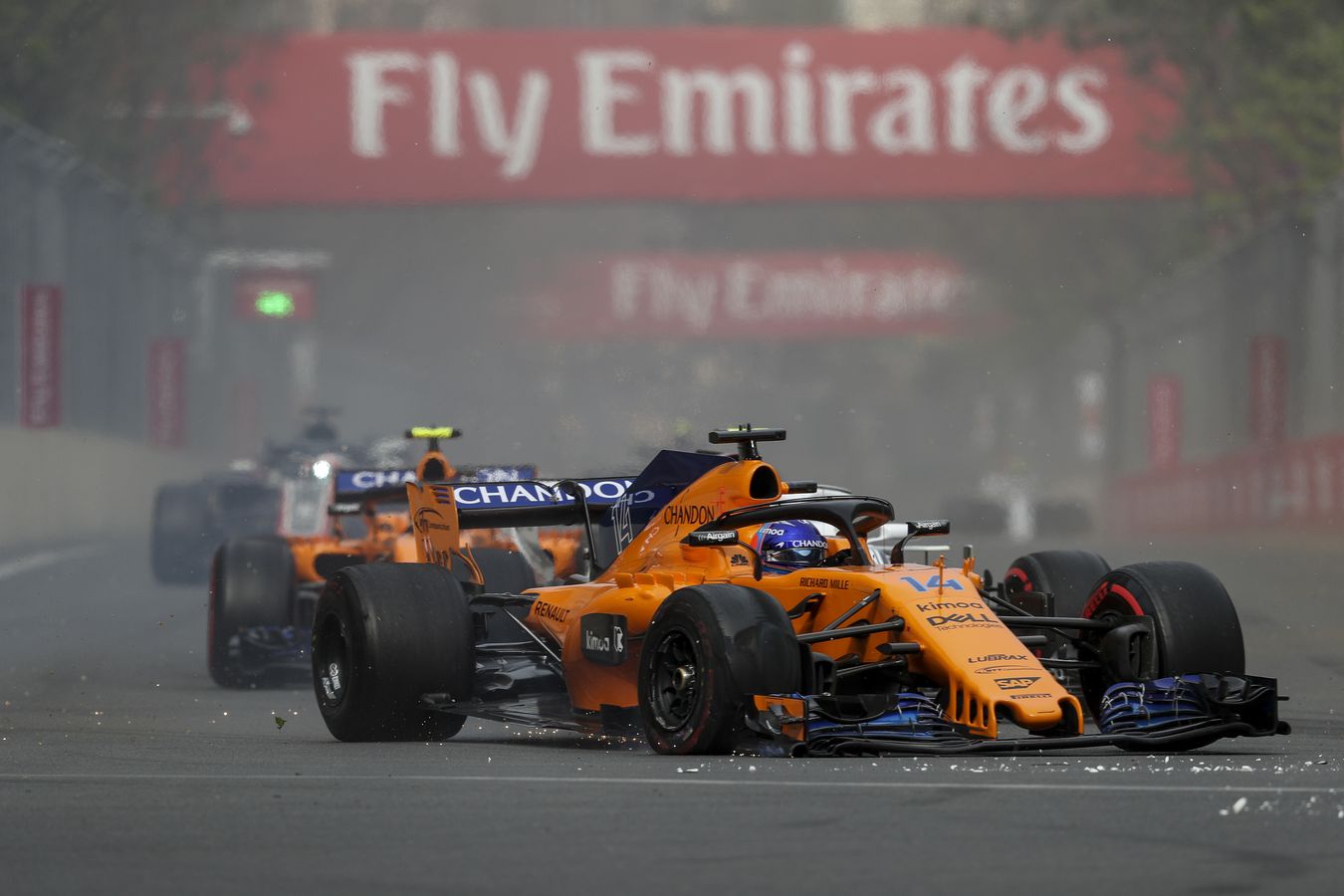 At the end of lap one after an almighty smash, Fernando limped into the pits with two punctures and a heavily broken car.

We could have called it a day - parked the MCL33 and labelled it a write off. But with our super speedy team in place and a determined Fernando Alonso behind the wheel, we managed to recover the car and send him back out.

Fifty laps later, Fernando had hauled himself into a scarcely believable seventh place – and in a car that had been robbed of valuable downforce in that first-lap clash. 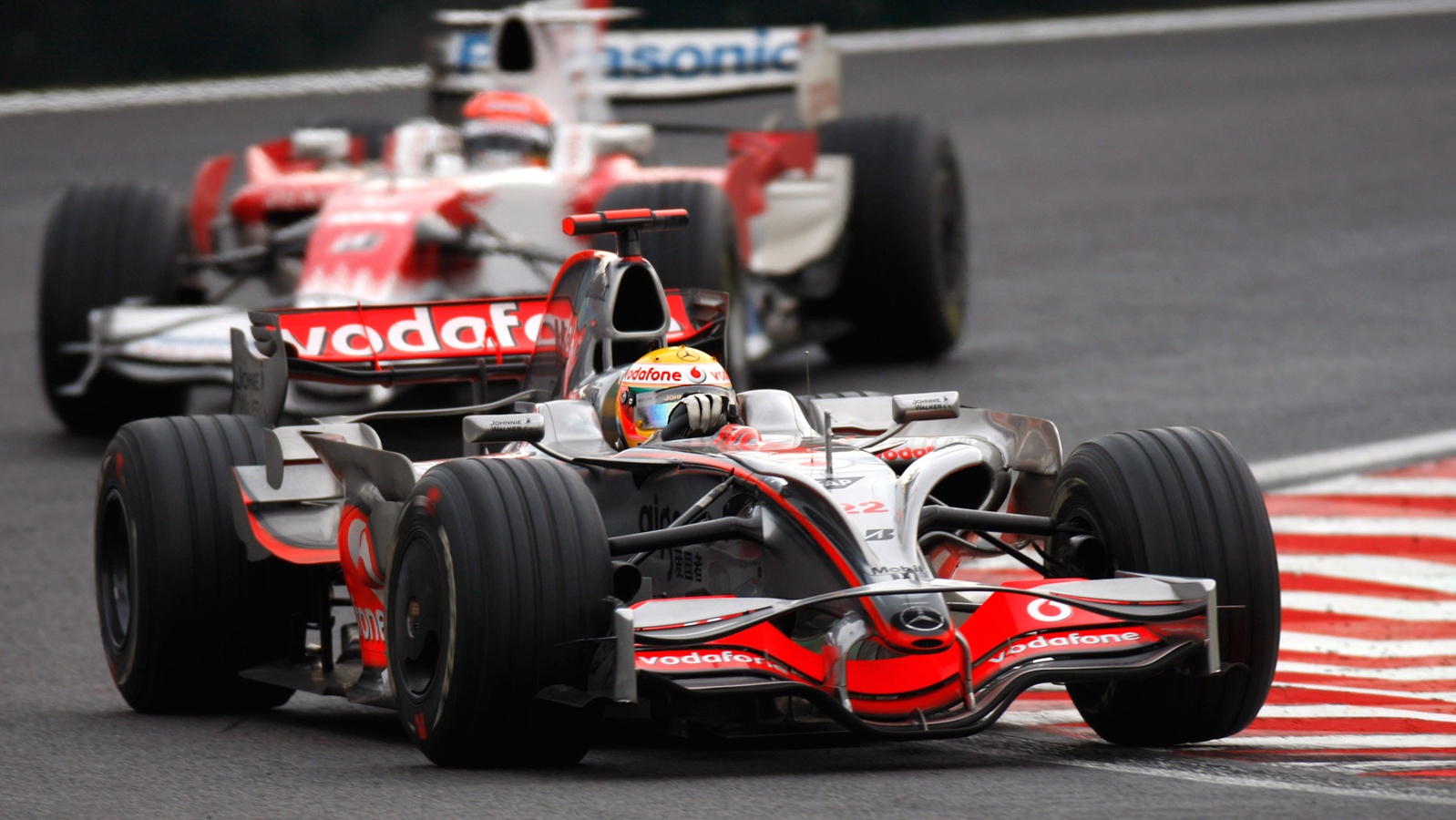 Okay, so this wasn’t strictly a McLaren pitstop; nor, in fact, was it a pitstop at all. But it was an occasion when a visit to the pits could have played an absolutely major role in the outcome of this world championship.

When the rains returned to douse the Interlagos track in the closing laps, the sensible money was on boxing to fit wet-weather tyres. It was a strategy that most of the field adopted – with the sole exception of the two Toyotas of Jarno Trulli and, infamously, Timo Glock. The Toyota management chose to roll the dice, seeing if they could hold out on dry tyres and maintain advantage over the pitting cars.

It was a brave gamble, but didn’t work out. Both Toyotas tumbled down the order, their tyres unable to cope with the track conditions. Glock held out bravely, but was finally passed by Lewis on the very last corner.

The rest, as we all know, is history…