Fernando Alonso can thank his older sister Lorena for sparking his passion for racing. She didn’t show any interest in playing with the kart their father, José Luis Alonso, had built for her. But as a young toddler, Fernando took a shine to the machine and as his father towed him around a makeshift track, his desire for speed intensified. Who could have predicted this young boy would grow up to be one of the greatest drivers in the history of Formula 1?

His kart was white with red chevrons, mirroring the grand prix cars that his heroes raced. In particular Fernando was inspired by the iconic colours of the McLaren-Honda driven by Ayrton Senna. Something that one day he wanted to emulate…

Three years earlier, on 29 July 1981 in Oviedo, in the Asturias region of the Iberian peninsula, Fernando Alonso Díaz was born. Raised in a modest family, he attended the Holy Guardian Angel Primary School and combined his schooling with racing karts.

The shy, reserved Spaniard was soon beating youngsters a couple of years his senior and in 1988 scored his first victory in Pola Liviana. This is where the first signs of his ultra-competitive streak developed.

“I used to cry when I didn’t win,” admitted Fernando years later. “And up until I was eight I had a ready answer when people asked me how I’d done: “I won,” I delivered with composure and pride. “He ganado.” It wasn’t always true, but who gave a damn.”

As he continued to race his family knew they couldn’t support him financially, but who could they call on for help?

“Fernando was always aware of the efforts which we were all making as a family,” says his father José Luis. “I would go to all the races to act as his mechanic, his mum had to do without seeing her son at weekends, but Fernando knew that if he was to go any further it was all up to him.” 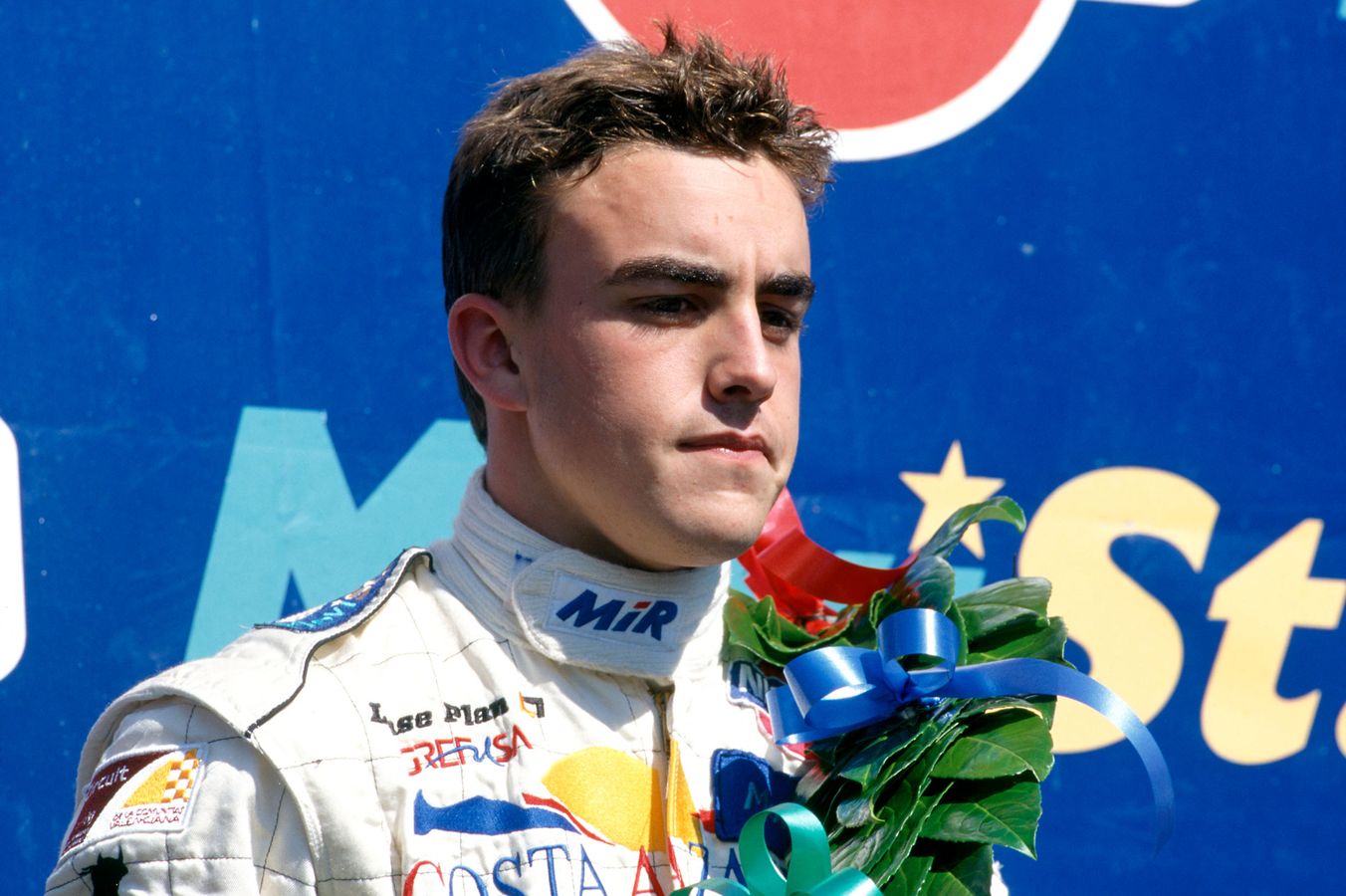 Thankfully, his supreme talent was spotted by José Luis Echevarria, owner of his local kart track. He tipped off his friend, Genikart owner Josep Marcó about the speedy Spaniard, who was immediately impressed with the youngster’s obvious ability.

“He made me realise that the driver is what counts 110 per cent,” said Josep Marcó. “In the past I used to think a better engine would make a driver quicker. But he’s only quicker if he can use the engine’s extra speed. I’ve never known anyone use speed like Fernando.”

While racing in the Catalan championship at Mora de Ebro, south of Barcelona, Marcó offered him the chance to race in the Spanish championship. It was a big test for the youngster, who had already been given special dispensation to race in the 100cc kart category, as he was technically underage for the more powerful machines.

But as has become a trademark throughout his career, Alonso drove with a maturity beyond his years. It was a defining moment in his life as Marcó was suitably impressed to hire him.

Fernando broke more age-related records as he went on to win multiple Spanish championships and became successful on the international stage. In 1995 he was third in the karting world championship in Braga, the following year he was world junior champion in Ghent and in 1997 won championships in Spain and Italy (learning to speak fluent Italian along the way). One year later he was Spanish International A champion and European Formula A karting runner-up.

His impressive performances were soon attracting the attention of influential figures in the wider motor racing world. Mauro Pozzi had previously worked with Ayrton Senna in karting and was astounded by the first time he ever saw Fernando Alonso drive. “I’ve never seen anybody do what he’s able to do in a kart,” he remarked.

At the end of 1998, Alonso attended a celebrity karting event and caught the eye of former Minardi F1 driver Adrian Campos and Niki Lauda’s former chief mechanic Ermanno Cuoghi. They were on the hunt for a replacement for Marc Gené to race in the fledging Formula Nissan series and invited 17-year-old Fernando to test one of their cars at Albecete.

To jump straight out of karts into a powerful 240bhp single-seater was a big step for the youngster from Oviedo, as Fernando had never raced anything with three pedals before.

His test session ended early after he’d applied the power a touch too early and kissed a guardrail, but it didn’t matter. He’d already equalled Marc Gené’s best-ever laptime of Albecete and Campos didn’t hesitate in signing him up on a three-year deal.

That was unnecessary. Alonso won the Nissan title at his first attempt, winning six races, and taking eight podiums and nine pole positions. It was an incredible achievement. Looking back on the year, Campos remembers the very first double-header race at Albecete, where Fernando was leading on his debut, until he made a mistake.

“I remember having my heart in my mouth and I felt so bad for him because he so nearly won it,” said Campos. “Then he put his arm around my shoulder and said: ‘Don’t worry, I’ll win the next one.’

“In the second race of the double-header he had a 42 second lead and I told him over the radio to slow it down and he replied, ‘I’m wearing my brake pads out, I can’t go any slower…’”

The following season Alonso jumped into FIA International F3000 with Astromega. After struggling early-on with understeer in the Lola chassis, he made a engineering switch that dialled more oversteer into the car. Immediately he was more comfortable and the results started to materialise; second in Hungary, victory in the season finale at Spa. Fourth overall in a recalcitrant car.

The young Spaniard was setting the junior formulae racetracks alight and his talents started to attract the attentions of Formula 1 team bosses. As a prize for winning the Formula Nissan series, he was given a once in a lifetime opportunity to test a Formula 1 car. It was at that test where his career truly took off…