Your one-stop shop for all things Formula E. This is your guide to the all-electric series and the NEOM McLaren Formula E Team. Simple, straightforward and easy to understand.

We're sure you've got plenty of burning questions ahead of the new campaign, and we're here to answer as many of them as possible to ensure you're up to speed by the time the lights go out in Mexico City.

We might not be able to tell you who will win the title or how many points we'll score, but short of that, we've got you covered.

Whether you're a die-hard McLaren fan not wanting to miss a second of papaya action, an FE fan looking to select your new favourite team, or a complete newcomer to motorsport, this guide will walk you through the need-to-knows of Formula E and our entry.

We don't want to overcomplicate things, so we won't. These are the basics of what you need to know to enjoy our first season in Formula E, no more, no less. Simple but entertaining. 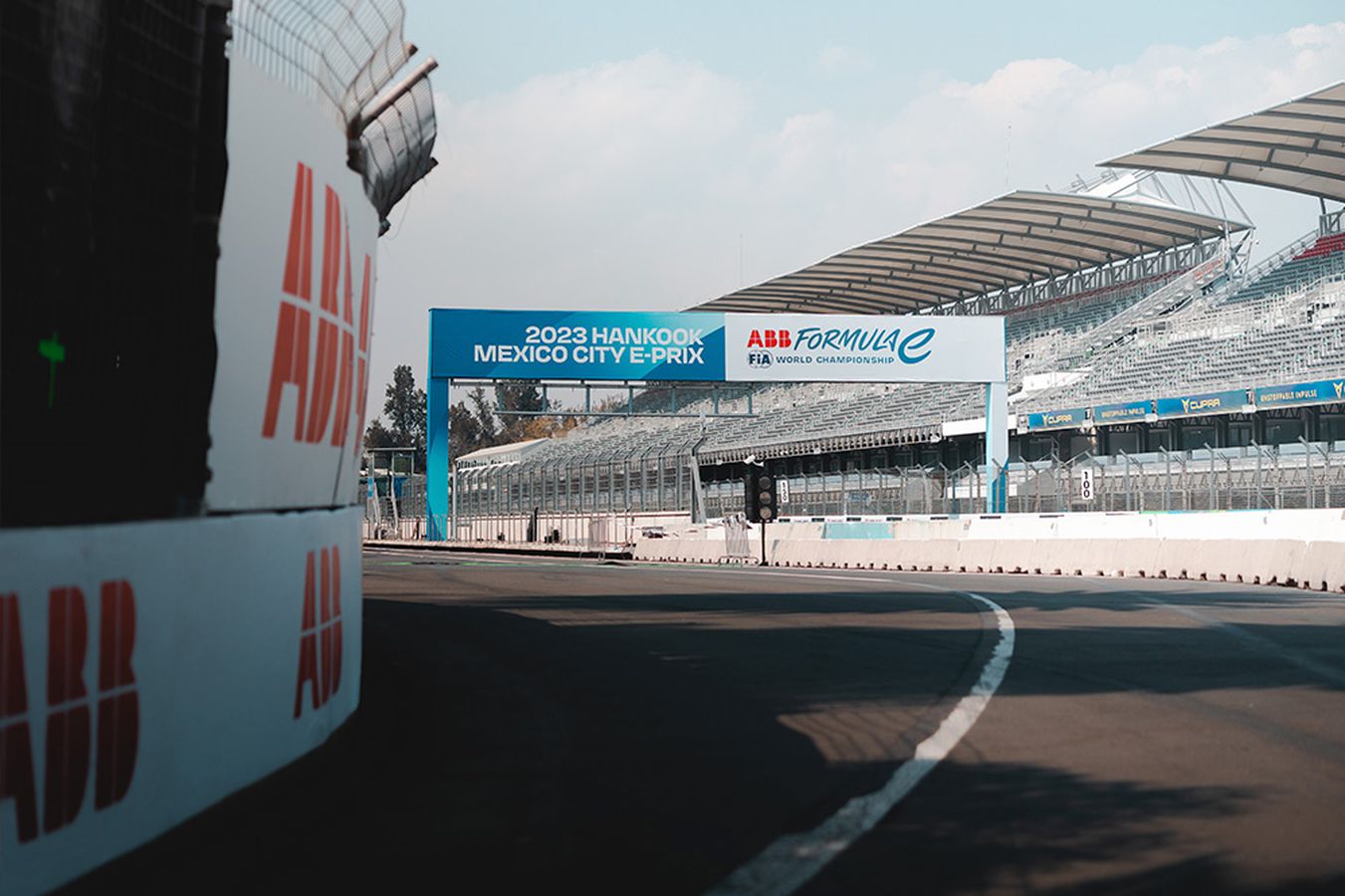 Why did we enter Formula E?

In short, the chance to acquire the team who won both of the last two Drivers' and Teams' Titles was too good to turn down.

With two titles, seven wins and 22 podiums across three highly successful seasons, the knowledge and expertise of the people we've secured – such as Team Principal Ian James and Team Manager Gary Paffett - as part of the transition will be invaluable.

They all know what it takes to create a title-winning team in the series, and with FE hitting the reset button as it enters the all-new Gen3 era, it provided an excellent opportunity to join. The team hope to use their knowledge and the Gen3 overhaul to shortcut the learning stage and get up to speed more quickly than would have otherwise been possible.

Plans to join Formula E have been in the works for a long time, it was just about timing. And it could have hardly been better.

Who is in charge of the NEOM McLaren Formula E Team?

Arguably our most important signing was that of Ian James, who arrives on the back of winning two Drivers' and Teams' World Championship titles with the Mercedes-EQ Formula E Team.

A recognisable face at the McLaren Technology Centre, Ian began his career with McLaren Automotive as a Manufacturing Engineer, and returns as Team Principal of the NEOM McLaren Formula E Team and Managing Director of NEOM McLaren Electric Racing. 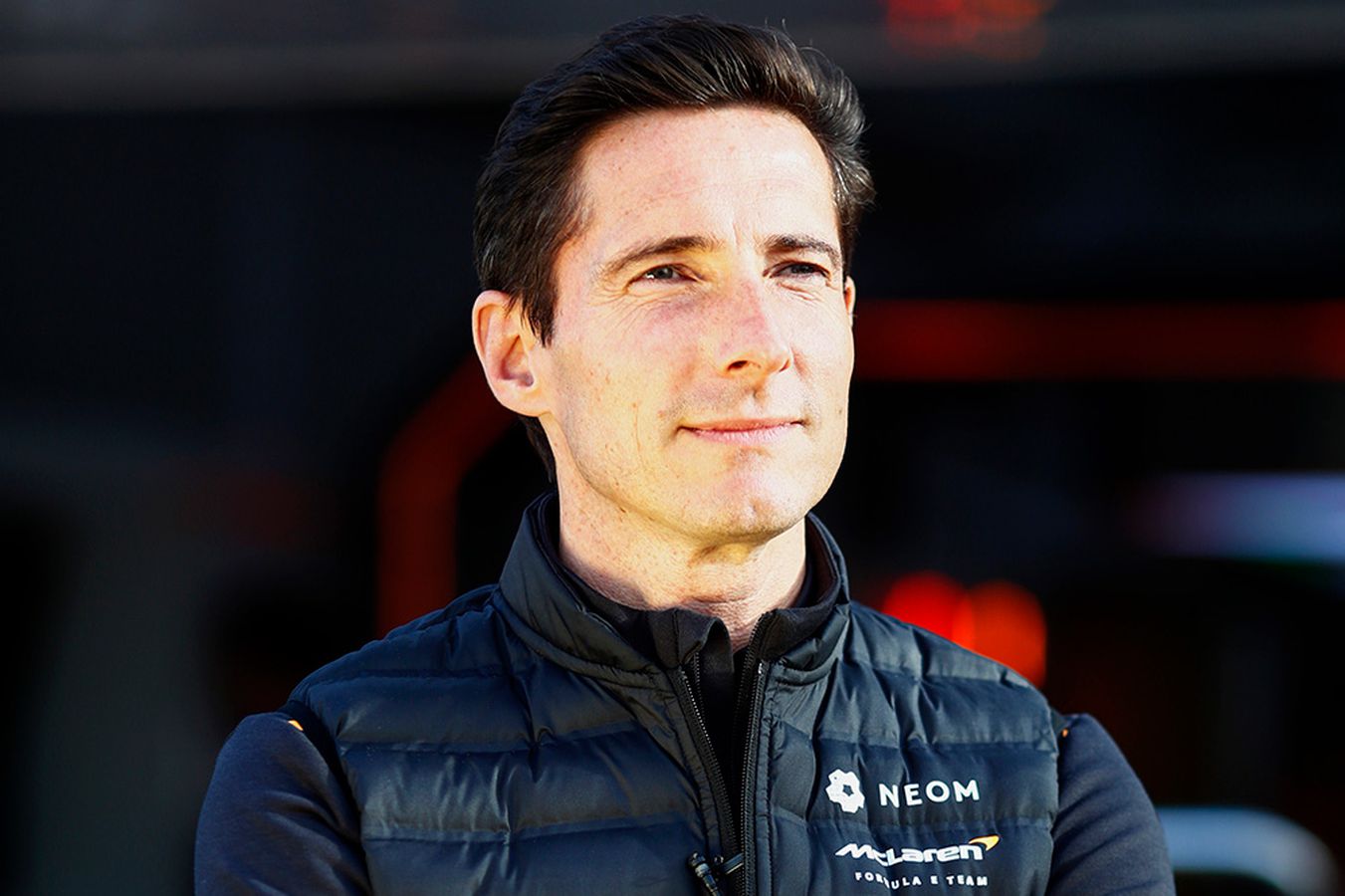 Who will be driving for the NEOM McLaren Formula E Team?

A classic combination of experience and youth. René Rast provides the experience, and rookie Jake Hughes, the youth.

Crucially, the German arrives with prior Formula E experience, completing one round in 2015/16, six rounds in 2019/20 and a full season in 2020/21, where he scored a highest finish of second.

Jake will be making his electric racing debut this season, but he could hardly be more prepared, having spent the past two seasons as Reserve and Development Driver for Mercedes-EQ, where he impressed the team with his work in meetings and on the simulator, playing a key role in their success.

The British-born racer has more than 10 years of single-seater under his belt, including the BRDC Formula 4 title and successful spells in Formula 2 and Formula 3, earning praise for his work both on track and with his teams in the garage. 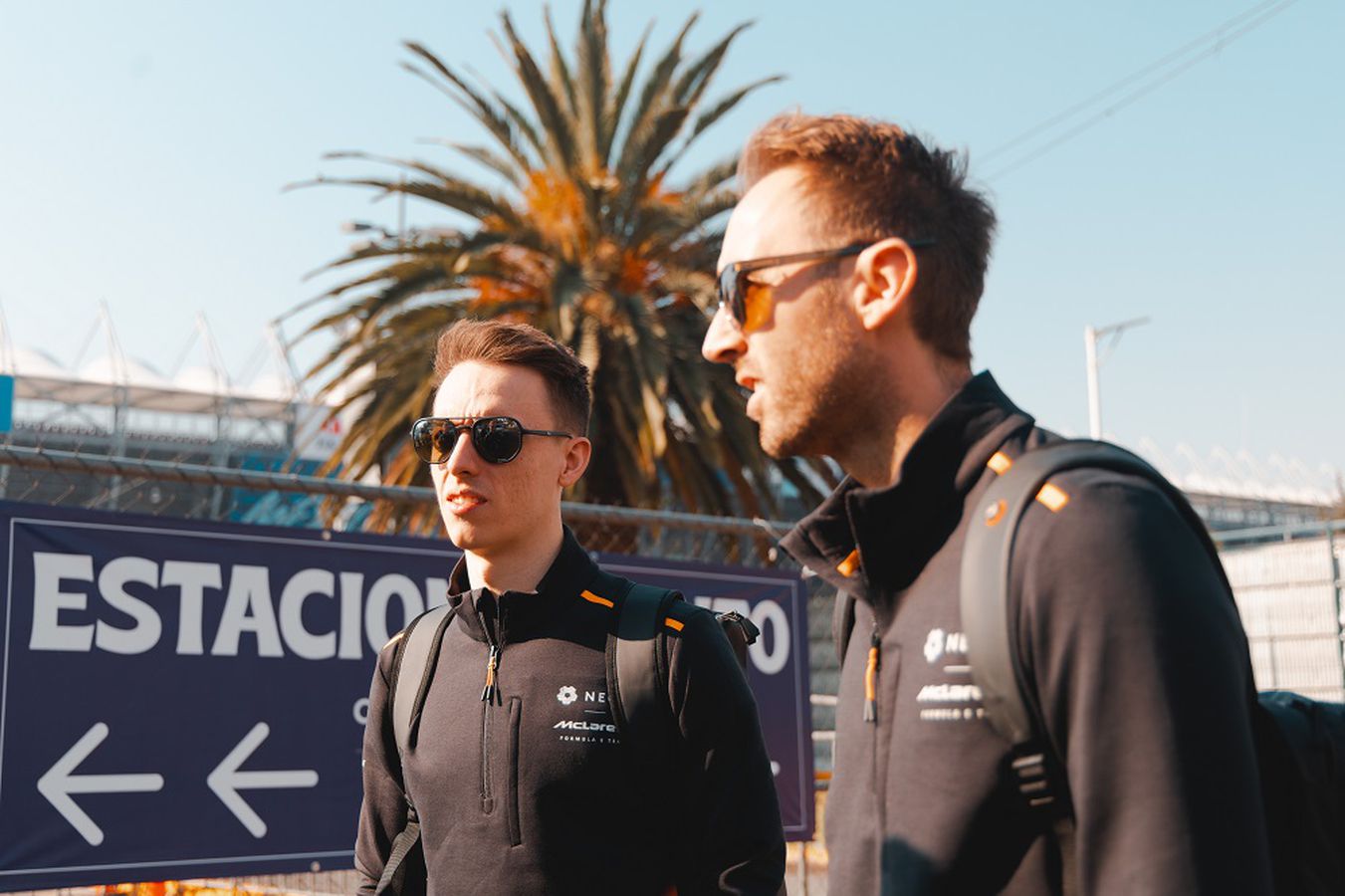 What is the weekend format?

A lot of action in a short space of time. Almost an entire race weekend is squeezed into a single day, making FE events extremely fast-paced and exhilarating. Perfect for a newcomer, and minimal disruption to the streets of the city where the event is taking place.

How does qualifying work?

The premise is simple – the fastest driver over one-lap wins, but there's more to an FE qualifying session than that alone, with a Group Stage followed by a series of knockout rounds used to determine who that driver is. As you'd expect from qualifying, it's high stakes, and errors are punished.

The two groups consist of 11 drivers based on championship position – odd numbers in Group A, even in Group B. The four fastest drivers from each group progress into the knockouts, where they are pitted against one another in head-to-head duels. The eight winners progress into the semi-finals, eliminating each other until only two remain.

The finalists then go head-to-head, with the quickest around one-lap taking pole and the three points that come with it. Those who made the knockout rounds will line up in the order they were eliminated, e.g. the quickest eliminated semi-finalist will start third, with the quarter-finalists in fifth to eighth – according to their lap times.

The drivers that competed in the polesitter's group, but didn't make the knockouts, will fill the remaining odd positions on the grid. The corresponding drivers from the other group will then fill in the even grid slots.

René (L) arrives with prior Formula E experience, completing a full season in 2020/21, where he scored a highest finish of second 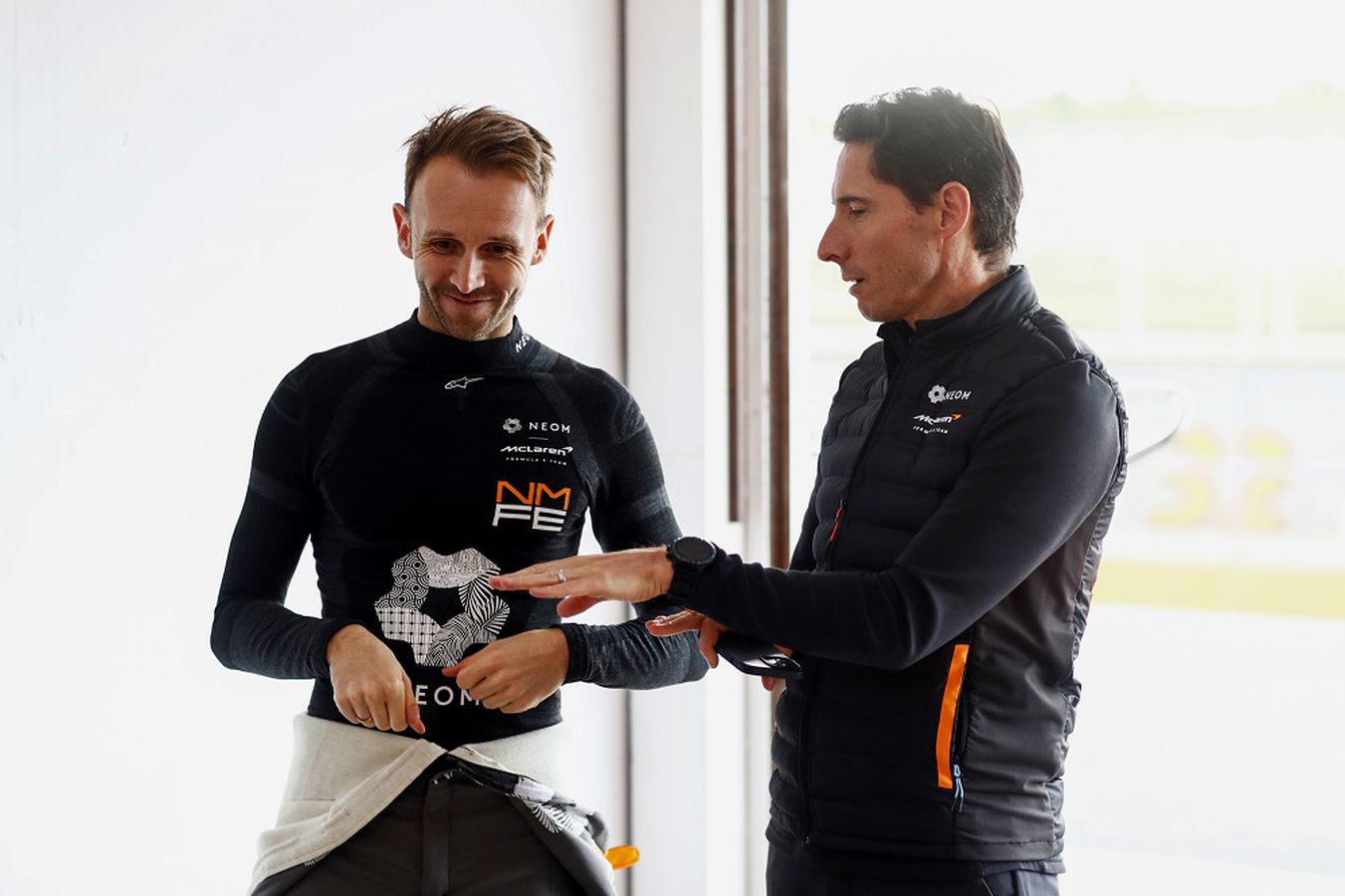 René (L) arrives with prior Formula E experience, completing a full season in 2020/21, where he scored a highest finish of second

How do the races work, and how many points are on offer?

Races are races. They begin with a standing start, determined by their qualifying places, and last for a specific number of laps, depending on the location. Additional laps can be added up to three laps prior to the end of the race, if warranted, due to Safety Car or yellow flag interruptions.

What tyres are used?

There is just one type of tyre in Formula E. Supplied by Hankook, the treaded all-weather boots are 18 inches. Four sets of tyres are provided for each event, except at double-headers, when six sets are available across the two events.

There will be five double-headers this season, which is when two rounds take place at the same venue on the same weekend (one round on Friday or Saturday, another on Saturday or Sunday). The schedules are mirrored from each day – the only difference being a single 45-minute practice session on the Sunday instead of the normal two 30-minute sessions.

The Gen3 car is inspired by a racing jet 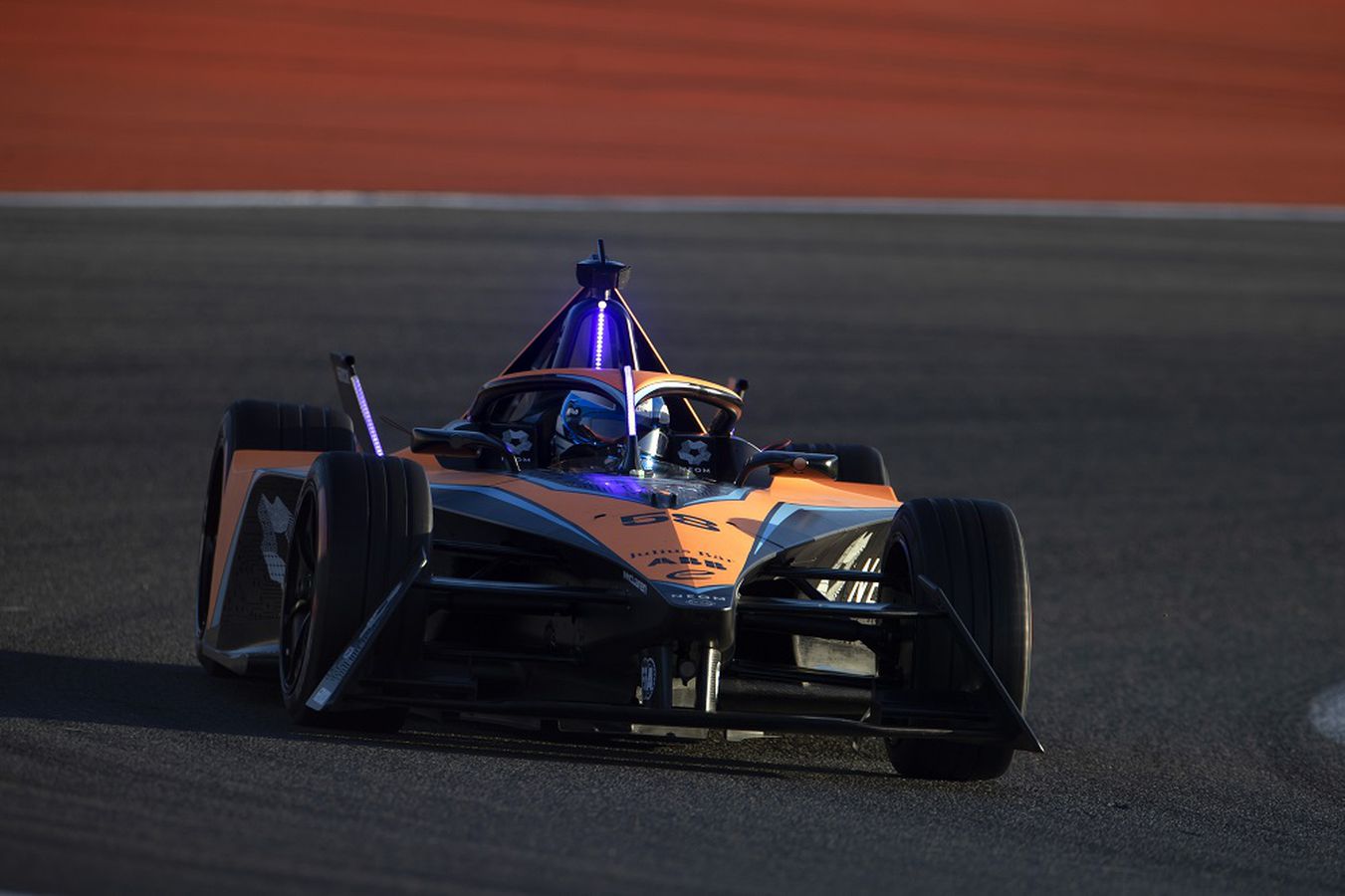 The Gen3 car is inspired by a racing jet

When can teams charge the cars?

Teams are allowed to charge their cars outside of sessions and in practice, but not during qualifying or a race, making power management a key factor to learn and get on top of.

What powertrains will the NEOM McLaren Formula E Team be using?

We've linked up with Nissan, who will supply us with their EV powertrain technology for the entirety of the Gen3 era.

What is the Gen3 car?

They're inspired by a racing jet. Now we've got your attention, right? The futuristic-looking design is new for 2023 and is optimised specifically for street racing.

The car is lighter, smaller and faster than the Gen2 it succeeded, with top speeds of 322 kph and up to 350kW of power. 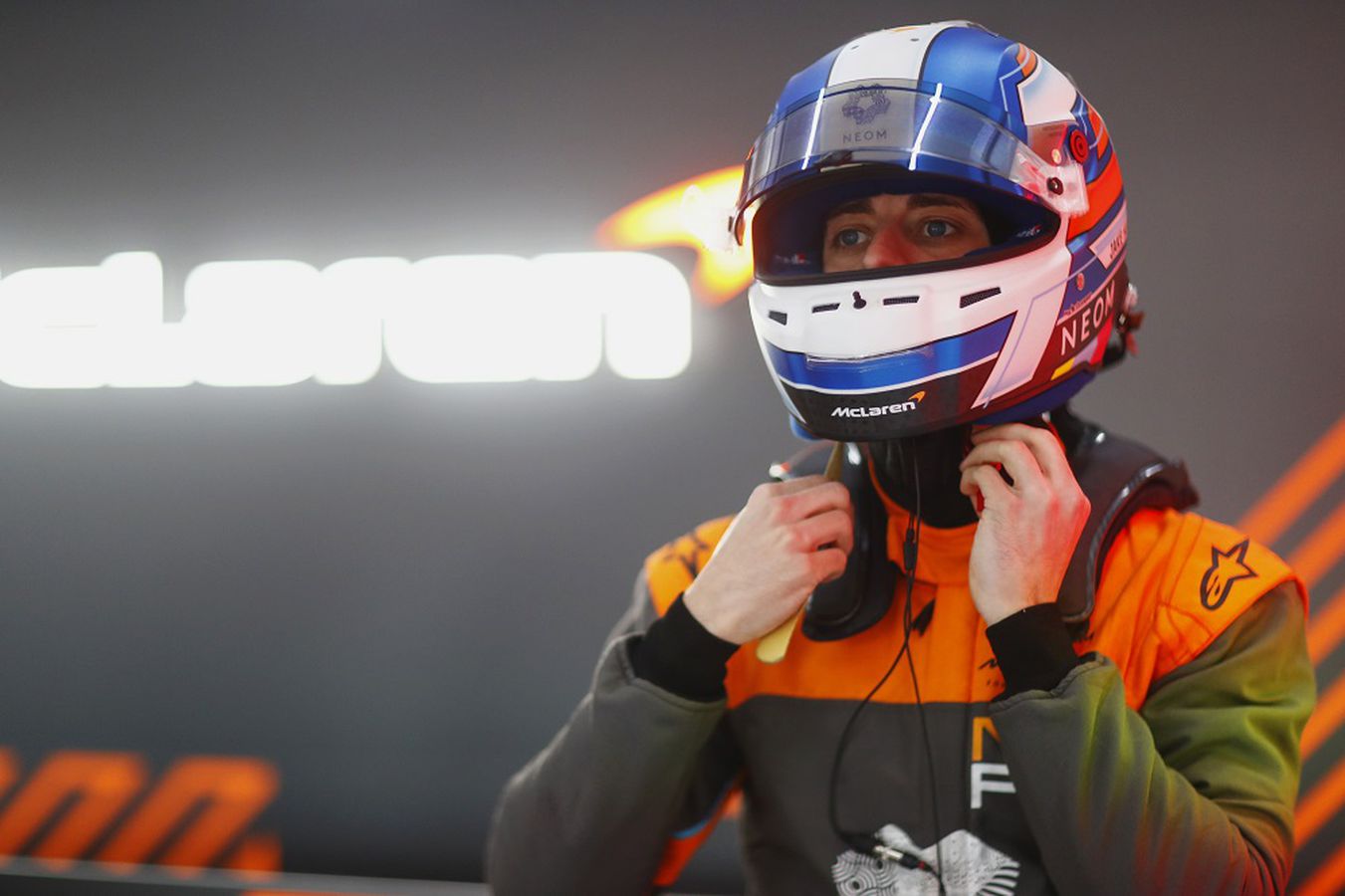 It's also smarter: at least 40% of the energy used within a race will be produced by regenerative braking technology, which means that they generate energy during braking and feed it back into the car. Unlike other single-seaters, the car has both front and rear powertrains, and does not feature hydraulic brakes, which all helps to increase the car's regenerative capacity.

The car is also designed with a focus on second life and end of life where possible, including tyres, parts and batteries.

What is Attack Mode?

Chances are, you'll probably have heard or seen the term "Attack Mode", but you might not actually know what it is. Attack Mode provides every driver with an additional 50kW hit of power – up from 300kW to 350kW. This is utilised by driving off the racing line and through an Activation Zone, boosting the driver's chance of an overtake. Attack Mode can only be used at certain times of the race, as pre-determined by the FIA.

Where will we be racing, and where can you watch the action?

The 2022/23 campaign will be the series' largest ever, featuring 17 races in 11 different countries, held almost exclusively on street tracks.

Starting in Mexico City, one of just two regular race circuits on the calendar, on 14 January, we'll then head to Saudi Arabia for a double-header.

Find the broadcast options in your territory here.

How will we perform this season?

You'll have to watch and see!

We've asked Ian, René and Jake, and short of relying on a mystic crystal ball, we ultimately don't know, but that's the beauty of a reset, and a large part of why we opted to enter the series when we did.

The team are confident we'll be fast out of the traps and competitive early on, but in terms of where we'll sit positionally within the grid, it's hard to tell at this early stage – but that's also the case for the entire grid.

Not your ordinary rookie

Jake shares his journey to Formula E, his long-term preparations and what we can expect from him

René Rast on why he returned to Formula E, his Gen3 expectations, and the team's progress

The electric era is upon us: Here's what to expect from the NEOM McLaren Formula E Team