#SocialFriday Q&A: The best from round ten

We travelled the relatively short distance to Spa-Francorchamps for the 2013 Belgian Grand Prix, where Vodafone McLaren Mercedes' tweeter 'The Fifth Driver' brought you the very best insights into the world of F1 racing on our official Twitter channel @McLarenF1.

Here's the best of #SociaFriday in Spa...

#Socialfriday @hannah_fowler96 "Do the drivers have their own physios? How often do they have treatments during a race weekend?"

TFD: Both Jenson and Checo have their own physios, Mikey Collier and Antii Vierula respectively, who work with them in between races and at the track. In addition to giving the drivers massages before they get into the car, focusing on the parts of the body that are under most stress in the car, such as the neck, they also ensure that the drivers' receive a balanced and nutritional diet. Physios spend so much time with the drivers that they usually become close friends.

#socialfriday @UltimateWebFan "Who is responsible for sorting out flights for the team and how far in advance is it thought about?"

TFD: We are lucky enough to have our own travel department who sort everything out for us. Formula 1 travels to so many countries, all with different travel requirements that they have a really busy time sorting out all the paperwork for our travelling personnel. They also book all our flights, which is no easy task. Different members of the team often need to go out at different times which becomes a logistical challenge, to say the least. They also need to make our reservations to stay in Hilton Hotels, when we reach the other end. This is all organised many months in advance. In fact we'll start 2014 booking soon!

#socialfriday @WillFrankland "How long does it take to initially set up the car when you first arrive at a circuit?"

TFD: We actually do a lot of the preparation before even reach the track back at the MTC in Woking. Whether it's Jenson and Checo, or regular simulator drivers Gary Paffett and Oliver Turvey, they work very closely with the engineers to determine the ultimate package for that specific circuit, factoring in things like downforce and ratios. Obviously there's no substitute for being out on track and learning about the performance of your set-up, so testing the plans put in place back at base is one of the main priorities in FP1. From there onwards, we use the data from the track to make changes to the car before we get to the race on Sunday afternoon. 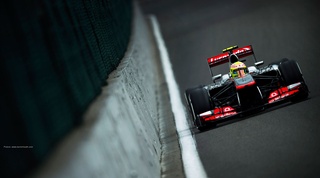 #socialfriday @birvin12 "How much does the race engineer speak to the drivers over the course of the lap/race?"

TFD: The race engineers only speak to the drivers when absolutely necessary. Pushing a Formula 1 car to the absolute limit requires full attention and too much chat would prove a distraction. For that reason they never go on the radio during a timed lap in qualifying. In the race messages are relayed to the driver for important information and if possible on straights when the driver is not busy concentrating on things like corner entrance speed and angle. Messages from the engineers will usually focus on things like tyres, front wing and engine modes.

#SocialFriday: the best from round twelve