Formula 1’s great track tussles range in quality from the downright sublime (Mika Hakkinen selling a dummy to Michael Schumacher at Spa in 2000, anyone?) to the downright ridiculous (let’s draw a veil over Indy 2006, okay?).

So let’s take a trip down memory lane and take in the full spectrum of McLaren’s greatest wheel-to-wheel battles.

One thing’s for sure, though, we’d always rather see a driver having a go than sitting back and playing the numbers game. And hopefully we’re not alone… right?! 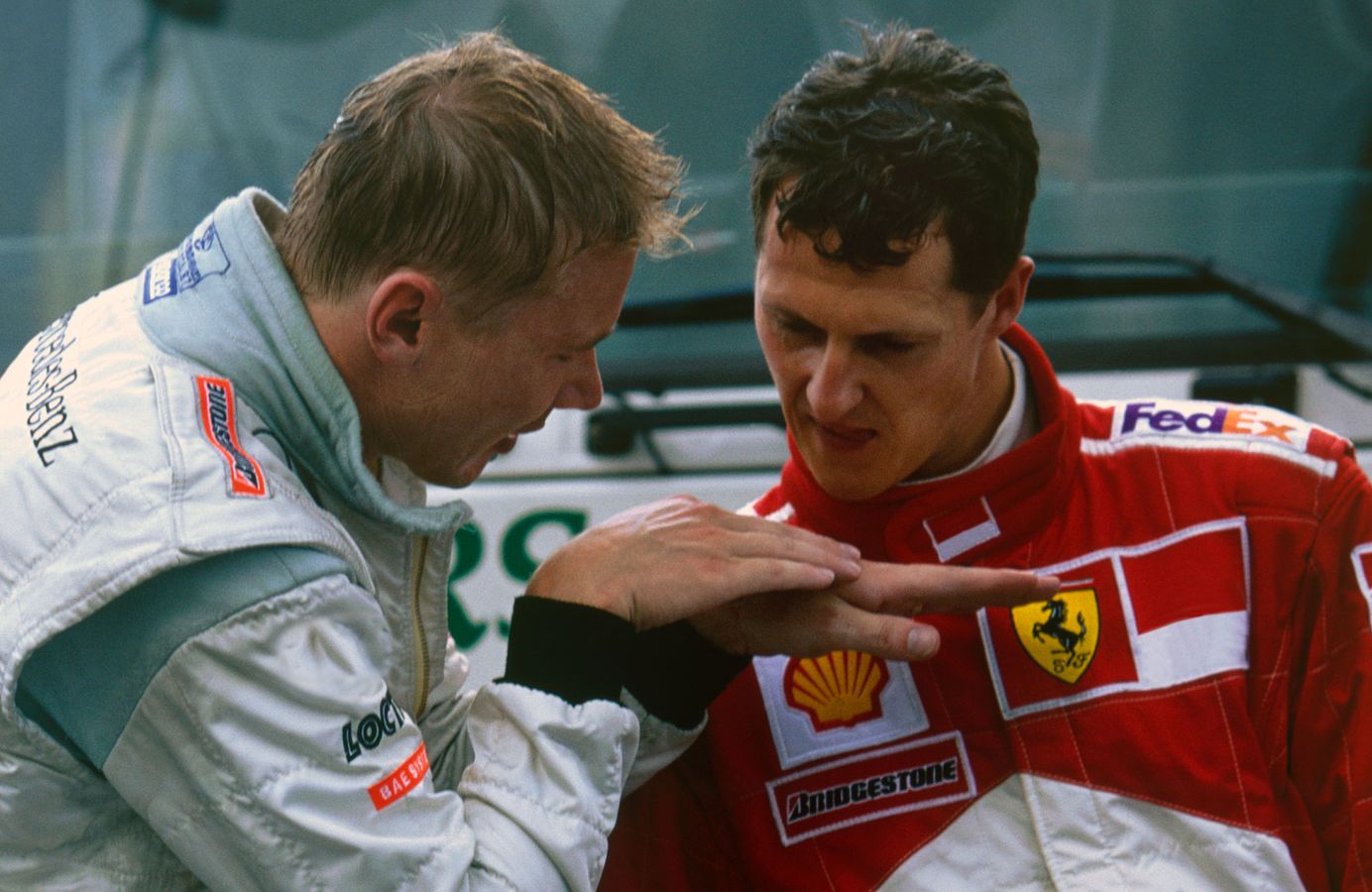 The greatest overtake in F1 history? It’s certainly up there. After being forced onto the dirt at 210mph, Mika kept it utterly nailed through Eau Rouge on the following lap, caught Schumacher’s draft and used a mixture of brawn and sheer balls to muscle past the red Ferrari and backmarker Ricard Zonta on the flat-out approach to Les Combes. Incredible. 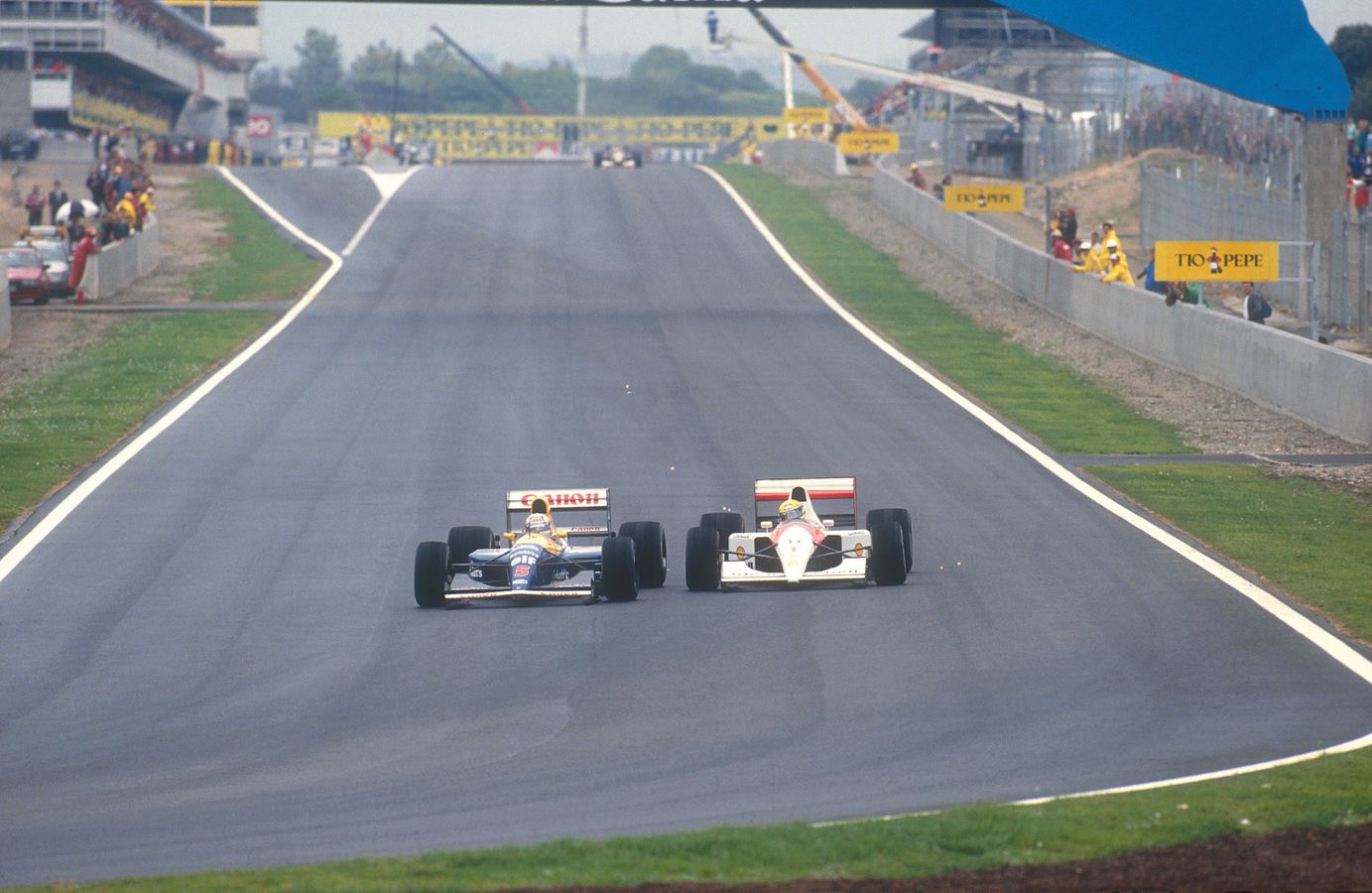 The shot of Nigel Mansell and Ayrton Senna duking it out just inches apart on the long drag down to Barcelona’s Turn One is arguably the most iconic image of two dueling grand prix cars. Each was a lionish racer who never gave an inch. The perfect advert for good, hard but clean racing. 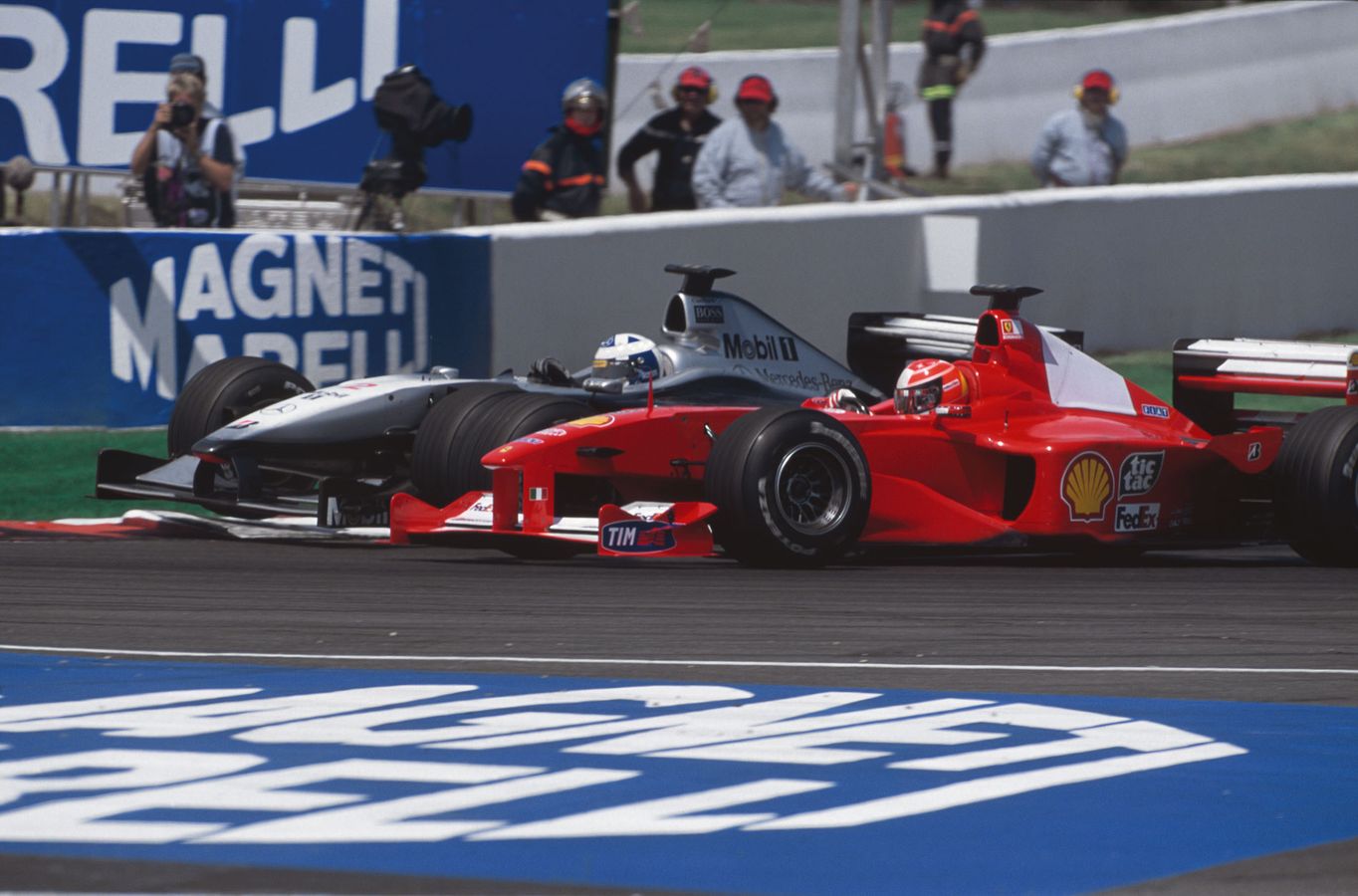 Schumacher was never the easiest man to pass. At Magny-Cours, he pushed Coulthard wide when he attempted a pass around the outside of the Adelaide Hairpin. That moved prompted David’s famous ‘gestures’ from the cockpit. A lap later, Coulthard made it stick, darting up the inside to outwit the German and win the race. 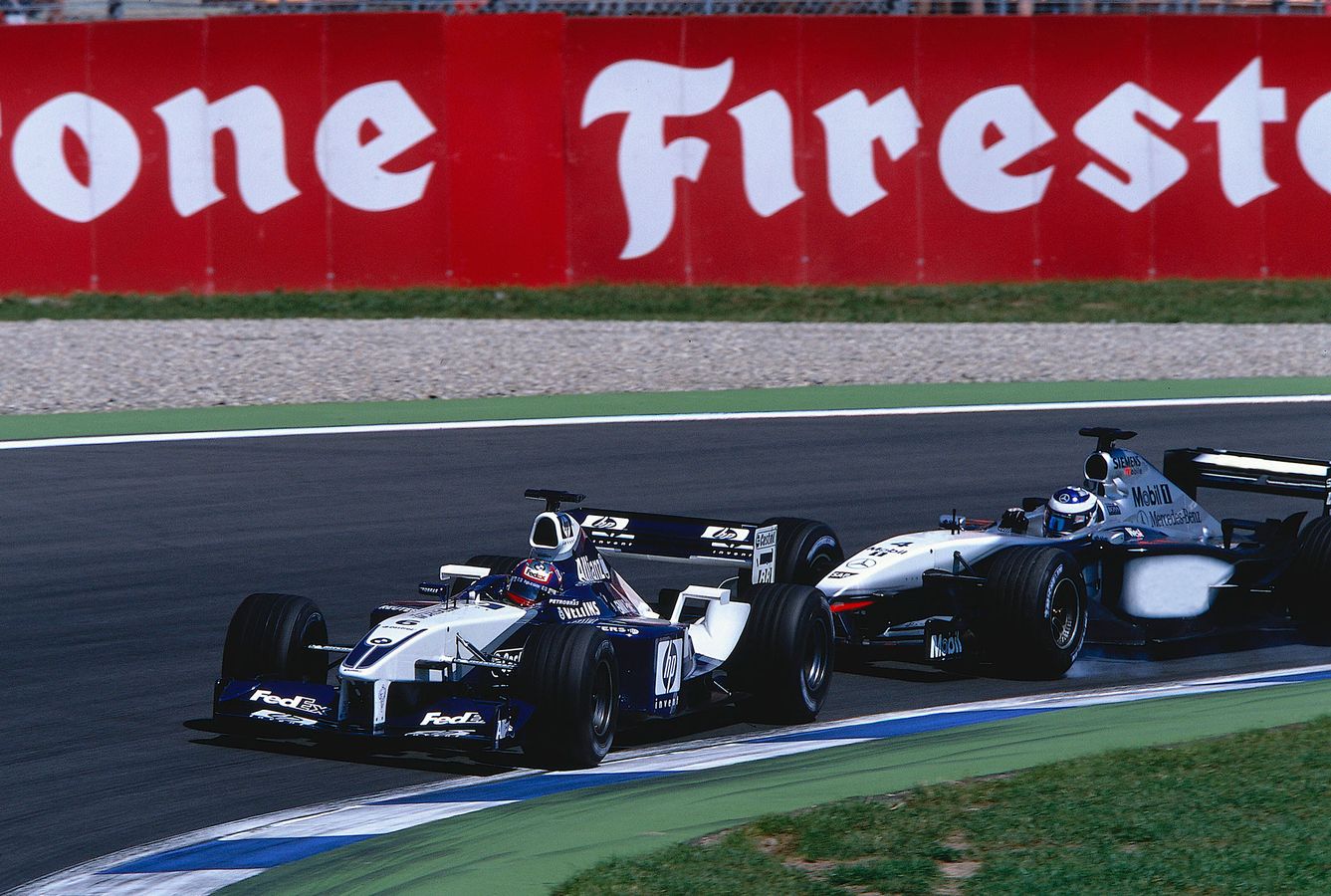 The ‘new’ Hockenheim may have lost some of the old circuit’s unique challenge, but it turned it into a great racetrack. In 2003, Kimi and Juan Pablo were arguably the two hardest racers in F1 – but always totally fair. At Hockenheim, they went at it hammer and tongs, exchanging places for half a lap before the Colombian stuck his Williams ahead at the stadium hairpin. 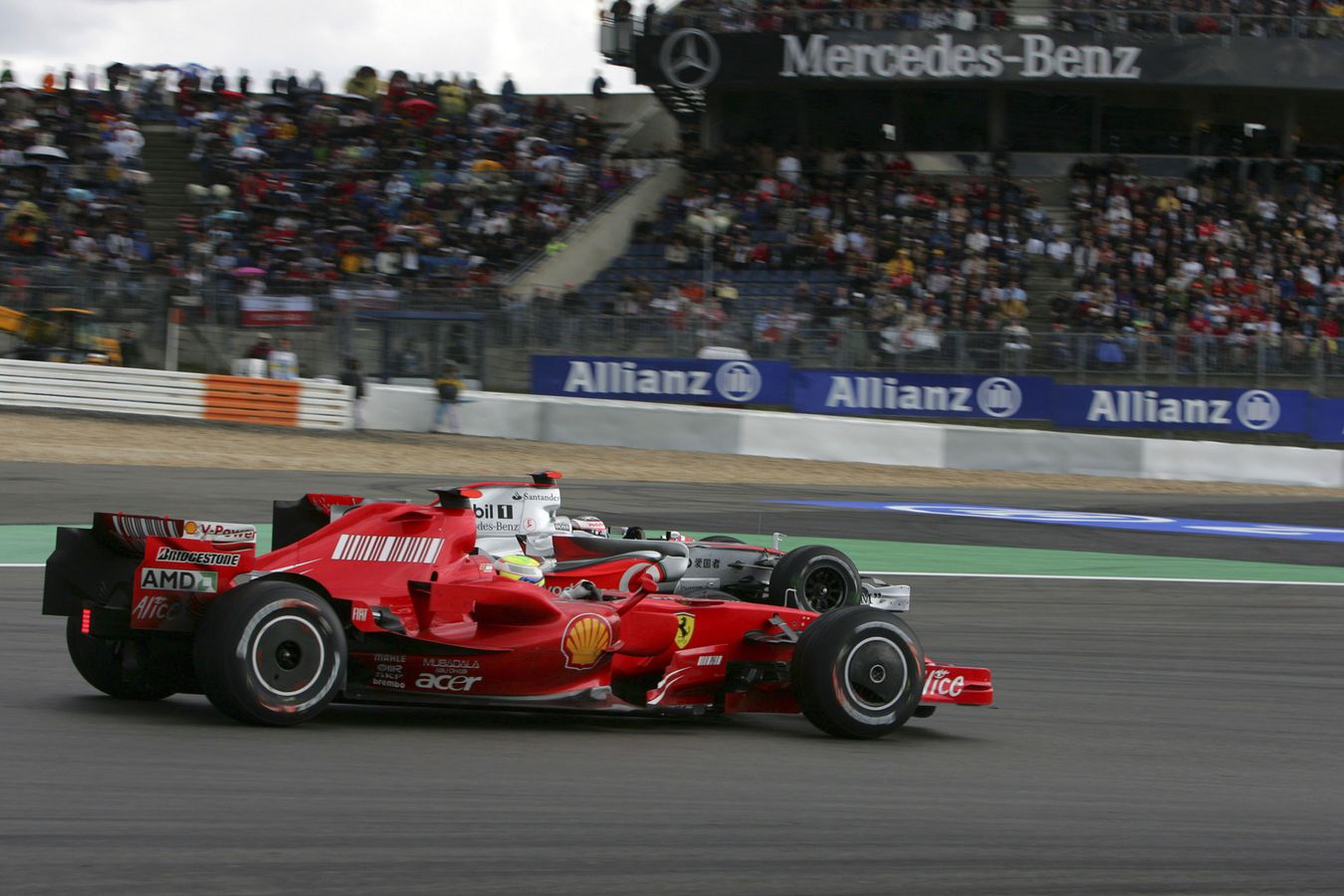 As the rain started to fall, and Alonso’s McLaren started working better in the cooler temps, the little Spaniard bit into Felipe’s lead. The pair banged wheels messily, but Fernando kept his foot down, arcing around the outside to squeeze inside for the following corner. It was aggressive stuff, and prompted some pretty heated comments from Felipe after the race too! 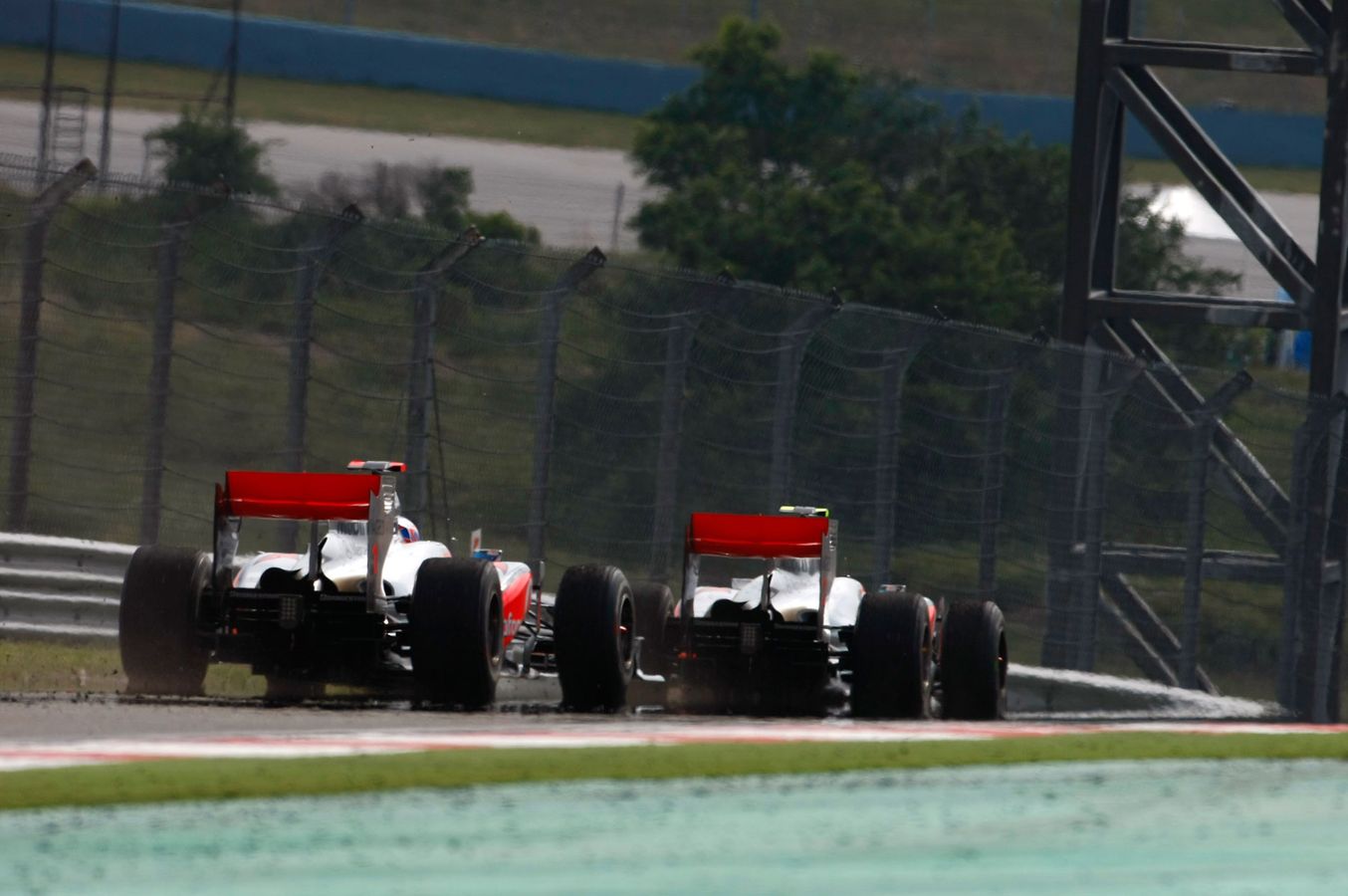 The McLaren garage held its collective breath – this was the battle for the lead, between two team-mates – and was happening after two other (Red Bull) team-mates had clashed and crashed. And all while both cars were running on fumes. The battle got pretty fraught, with the pair exchanging positions, before Lewis chopped in front and eased away. That’s how it’s done. 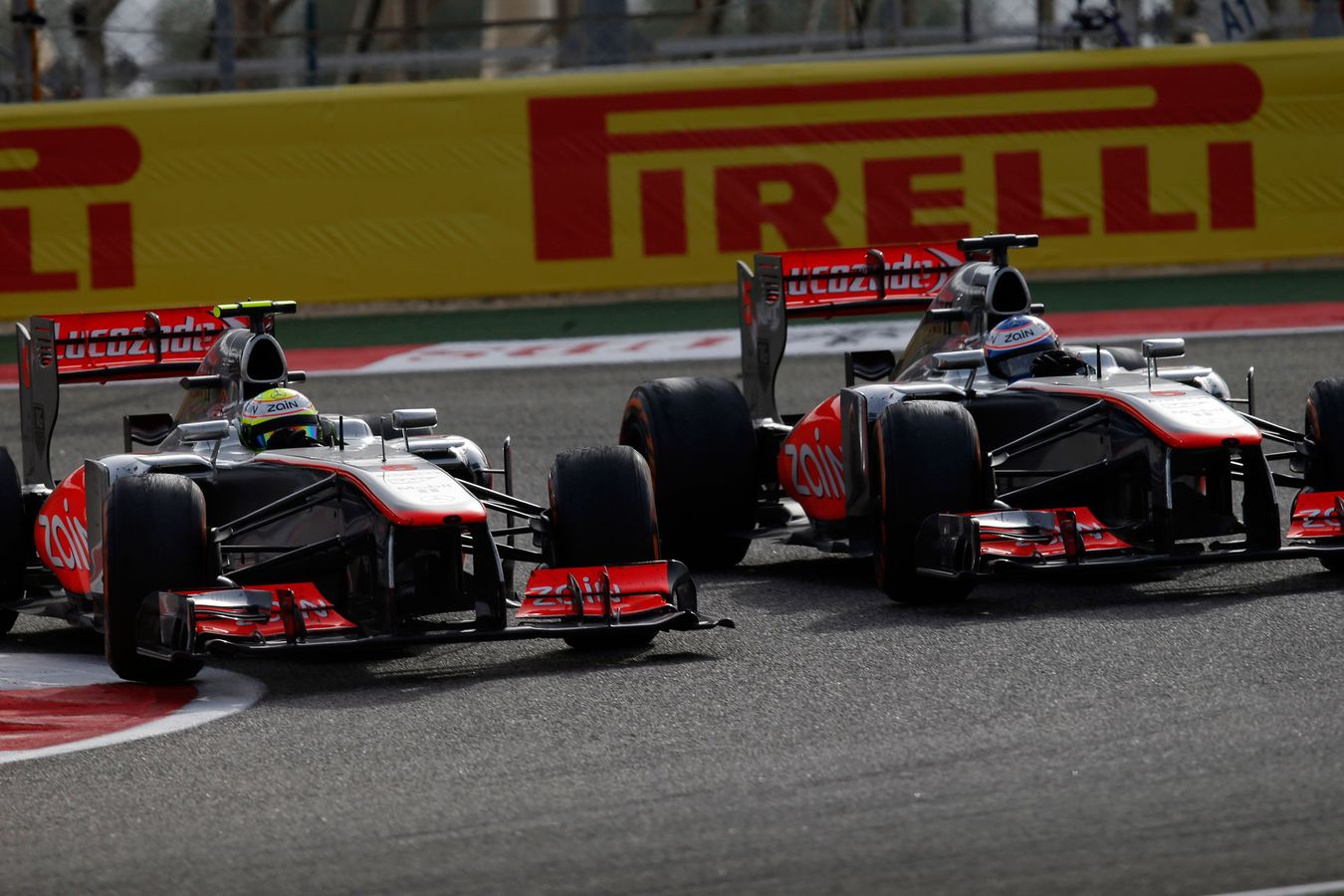 Instructed by team boss Martin Whitmarsh to ‘use his elbows’, Mexico’s Sergio Perez took that instruction to heart at the very next race, getting embroiled in a fierce, fractious battle with team-mate Jenson Button. “He just hit me up the back… Calm him down,” exorted Jenson over the radio. Sanity prevailed, and they finished sixth (Checo) and 10th (Jenson). 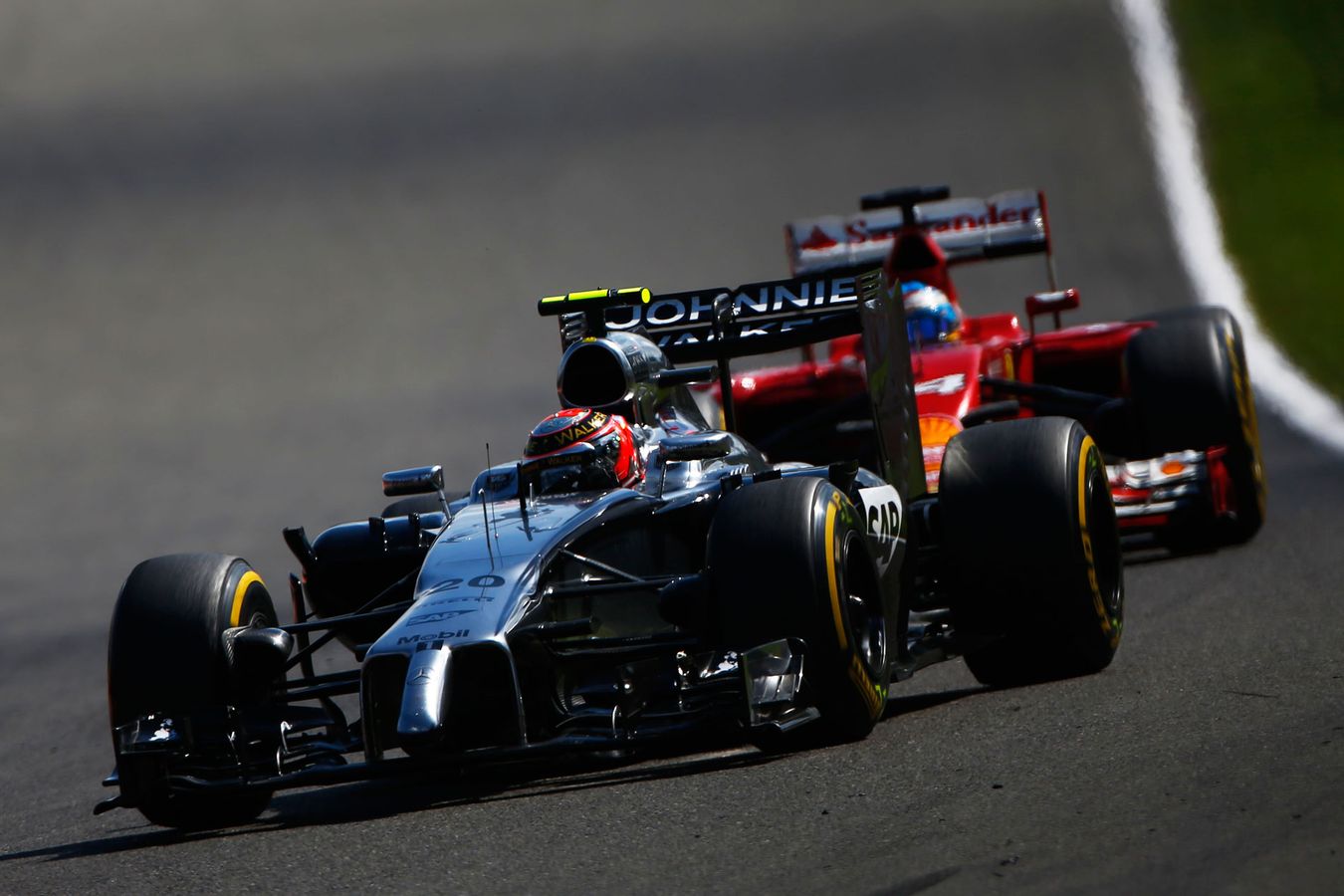 You don’t easily keep Fernando Alonso behind you – more often than not, the little Spanish terrier will find a way past. So what happened when the unstoppable force met the immovable object? Alonso didn’t bargain on young Kev being such a spirited scrapper. Nor, mind you, did the race stewards, who handed the Dane a 20-second penalty for his driving. Oh well, you live and you learn… 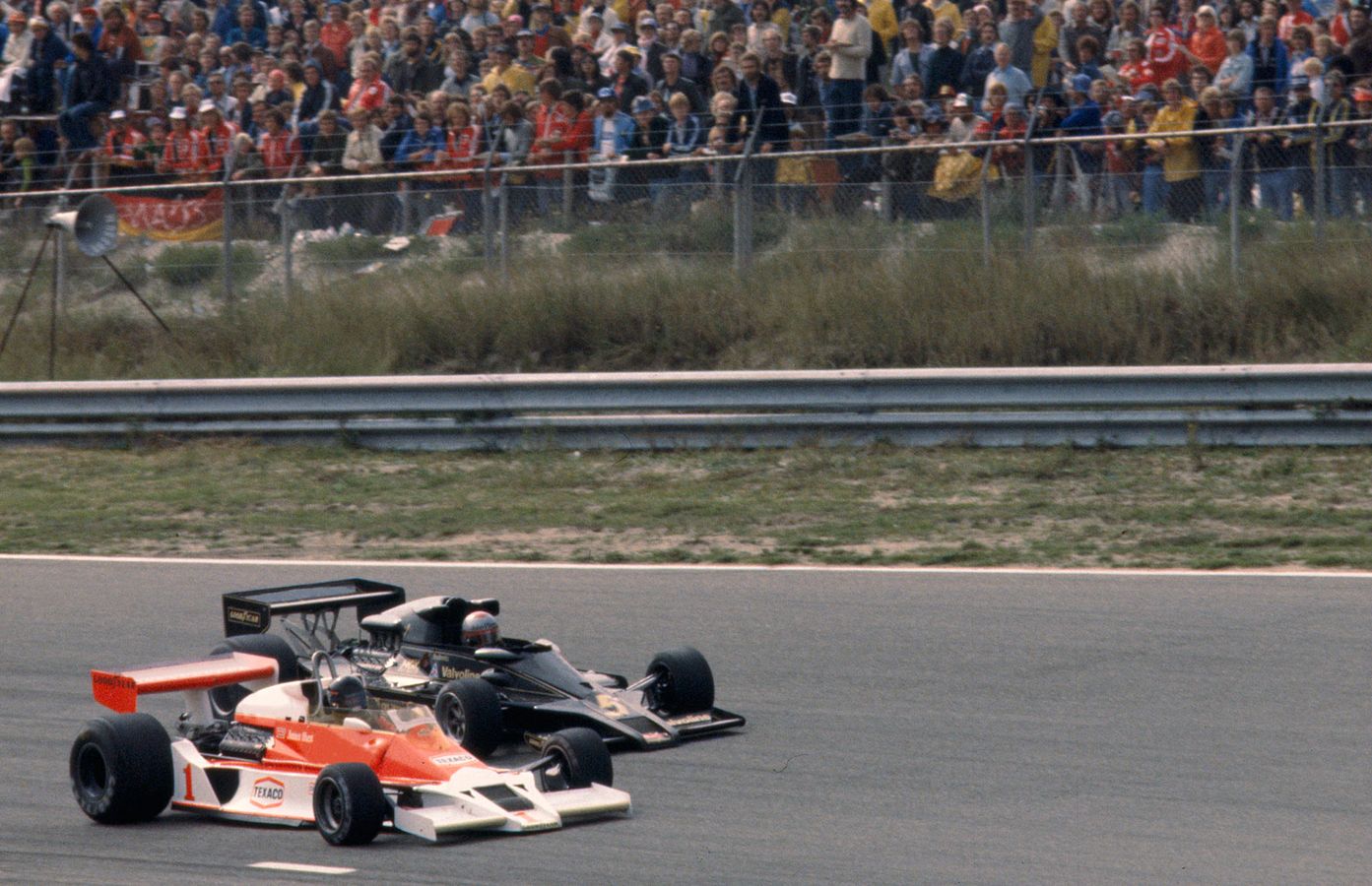 James may have led, but Andretti – in his ground-effect Lotus – was charging. Into the Tarzan hairpin, the pair raced side-by-side, Andretti taking the outside line. At the exit, James moved ever outwards until the pair collided. Each driver was furious with the other: “We don’t pass on the outside in Formula 1,” huffed Hunt haughtily. “Silly jerk!” exclaimed Andretti.  “James Hunt, he’s champion of the world right? The problem is that he thinks he’s king of the god-damn world as well!” 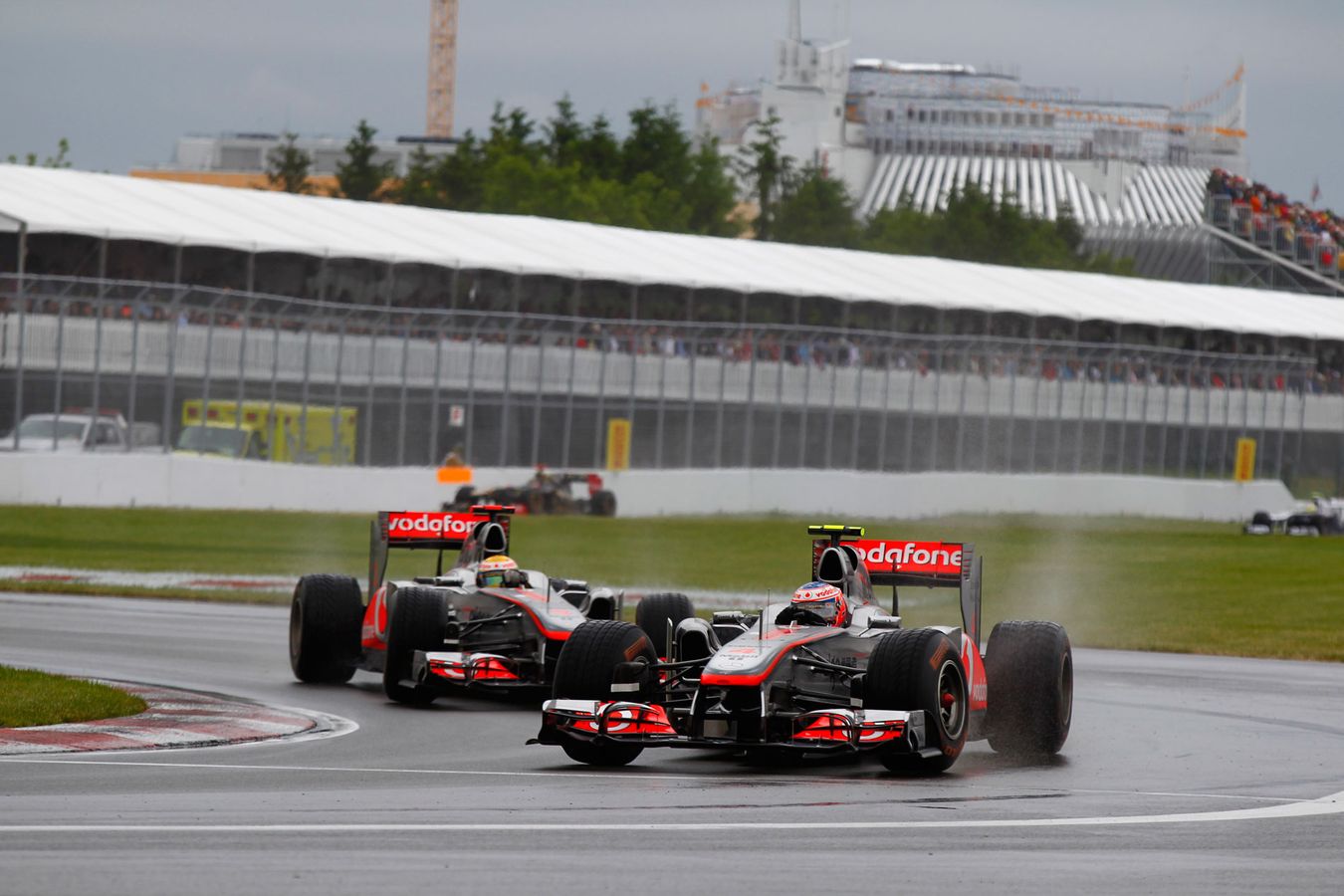 The 2011 Canadian Grand Prix may have been the longest F1 race of all-time (lasting a colossal 4hr04m39.537s), but Lewis Hamilton’s race was far shorter – it lasted only seven laps! He tried to pass his team-mate, just as Jenson was changing his line for the next corner. The two messily collided, Lewis’s race ending with wrecked rear suspension. “What is he doing?!?” came Jenson’s withering response over the radio. Jenson? He won the race. Taking the lead on the very last lap. Top stuff… 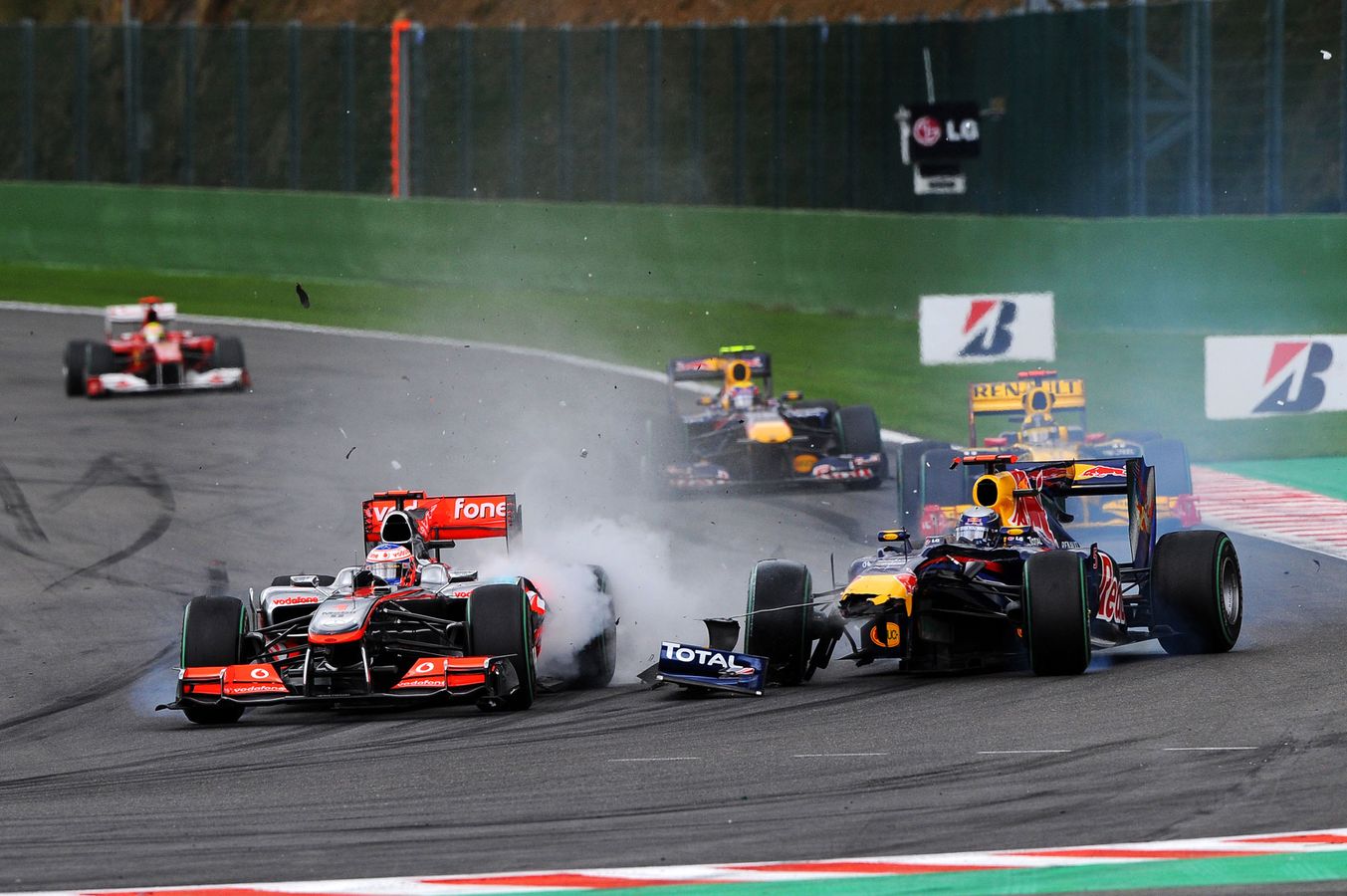 Provided you get a good run out of Stavelot, there’s a pretty good chance you can jink out of your rival’s slipstream and attempt to pass into the Bus Stop chicane. That was Sebastian Vettel’s plan, except that it all went pear-shaped the at the precise moment he pulled out of Jenson’s draft. His Red Bull inexplicably snapped sideways, T-boned the McLaren and putting Jenson out of the race. This was the incident that briefly earned Vettel the ‘Crash Kid’ nickname! 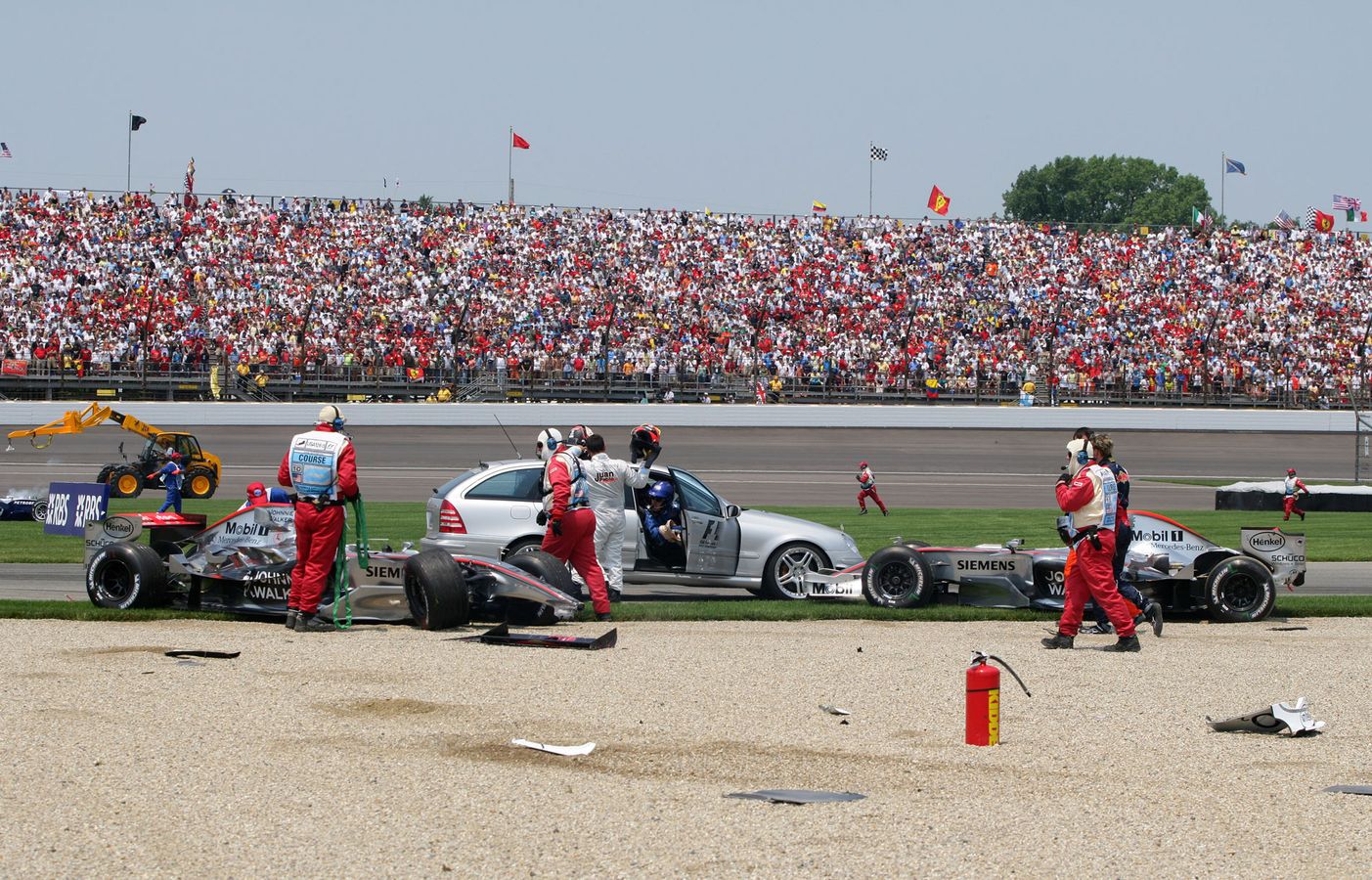 At 2005’s controversial US Grand Prix, both McLarens had withdrawn on the parade lap – along with most of the field. They hadn’t registered a single racing lap. A year later, they did exactly the same – although by accident rather than design! The two team-mates lasted about 22 seconds before colliding with each other at the first corner. It was the fiery Colombian’s last-ever race for McLaren. Not sure if you could really call it a ‘race’…

30 minutes before the start of a grand prix

Monza: "The Greatest Racetrack in the World"

Inside the MTC Motor Show 2014