30 minutes before the start of a grand prix

At the start of the year, we dropped in on the McLaren pit garage in Bahrain to eavesdrop on proceedings during half an hour in the life of a Formula 1 test. This time, we’re back to chronicle perhaps the most fraught and frantic 30 minutes in grand prix racing – the half-hour that leads up to the start of the race.

It’s a well-practiced, procedure-driven series of events – all driven by the team’s two uber-calm and ultra-experienced race engineers, Tom Stallard (Jenson) and Mark Temple (Kevin), and backed up by team manager David Redding and chief race engineer Ciaron Pilbeam, who monitor events from the calm nerve-centre of the pitwall. 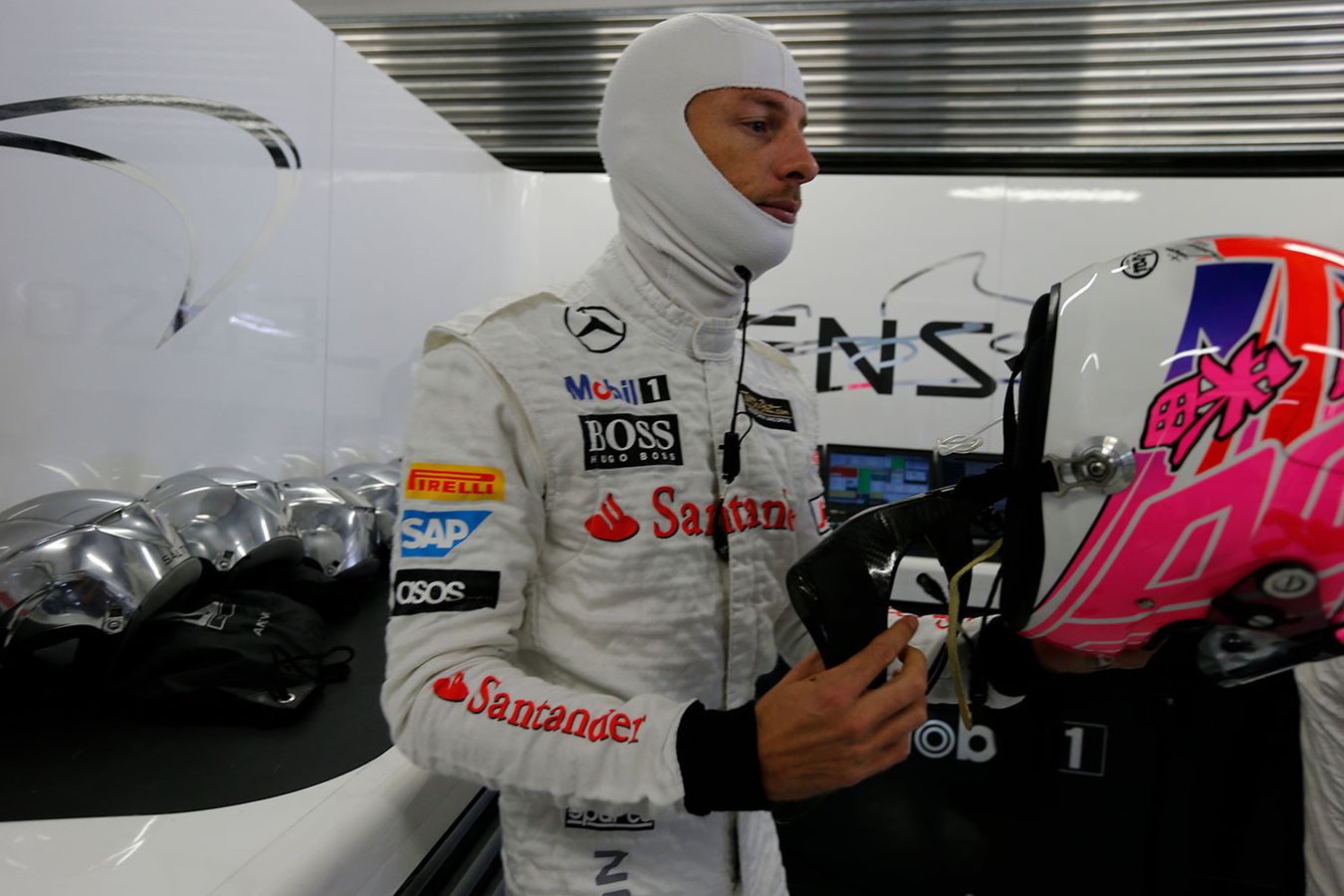 Ever wondered what happens when your favourite driver is lining up on the grid ahead of the race? It’s much more than simply rolling up to the allotted grid slot and selecting first gear. To find out more, and read on… 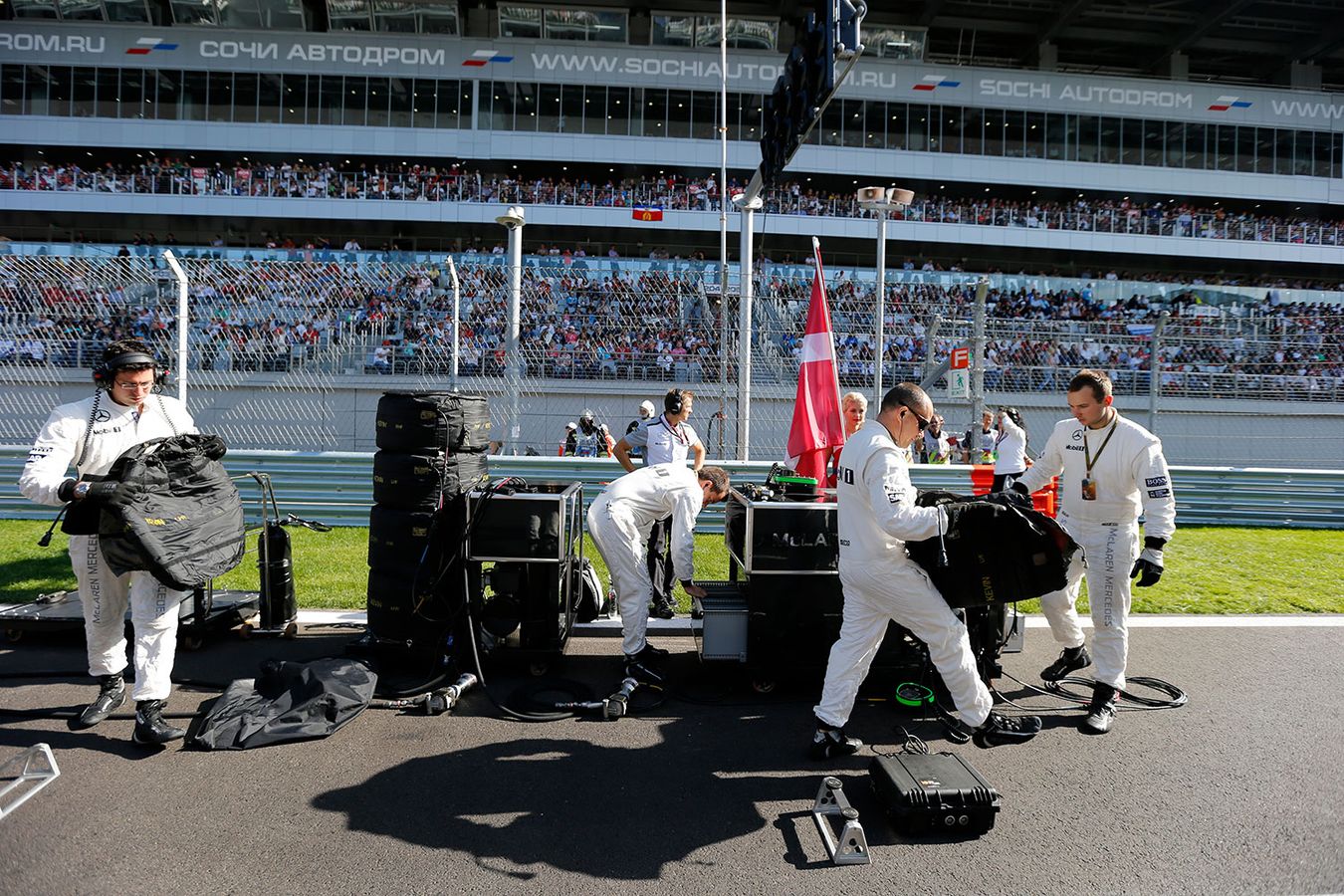 00:30       The pitlane opens, and remains open for 15 minutes – this allows drivers, equipment and personnel to get out onto the grid, from where they can begin the countdown to the start.

00:29       Our VIP guests gather at the front of the garage to see the cars leave for their reconnaissance laps to the grid. Our Twitter crew also swoops to grab those frantic, blurry shots of the cars heading out for battle. 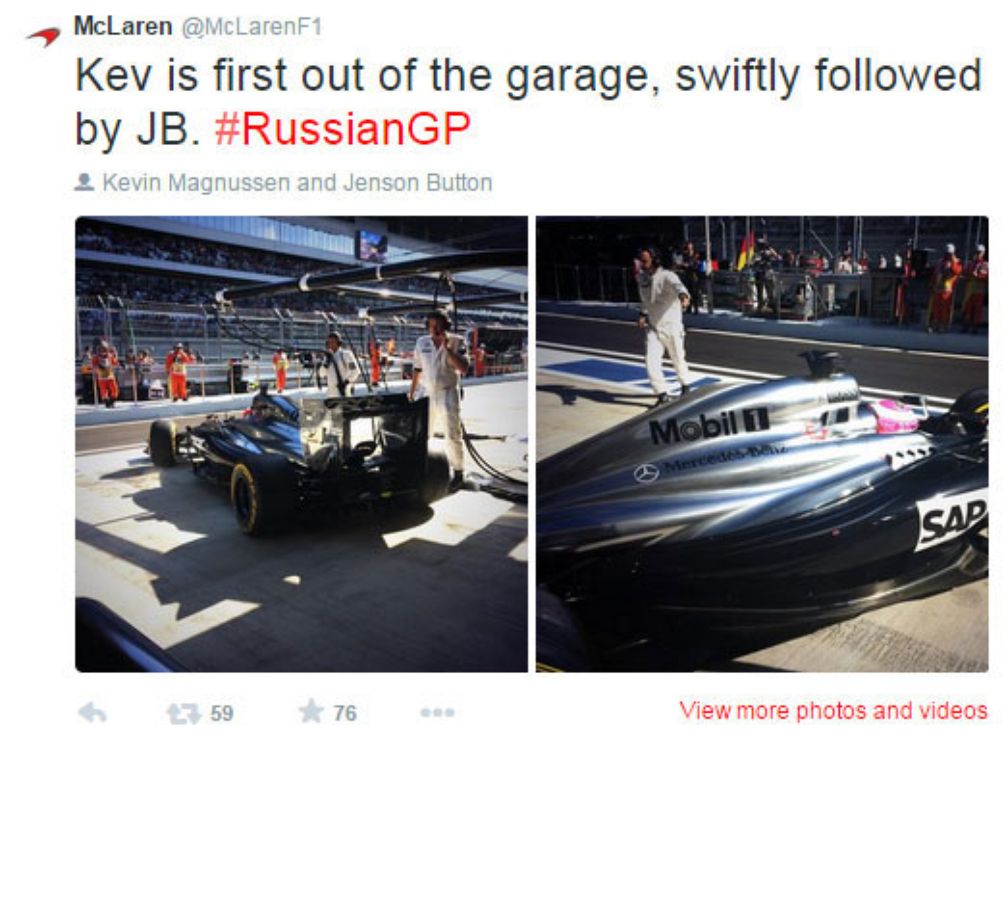 This is also an opportunity to judge the conditions: usually, drivers will drive straight to the grid, but if there’s been a change in the weather since qualifying, they’ll often opt to drive through the pits, in order to clock up more laps and evaluate set-up and grip levels.

00:28       Our comms team hook into the garage wifi to Tweet shots of the cars leaving the garage before heading out to the grid. 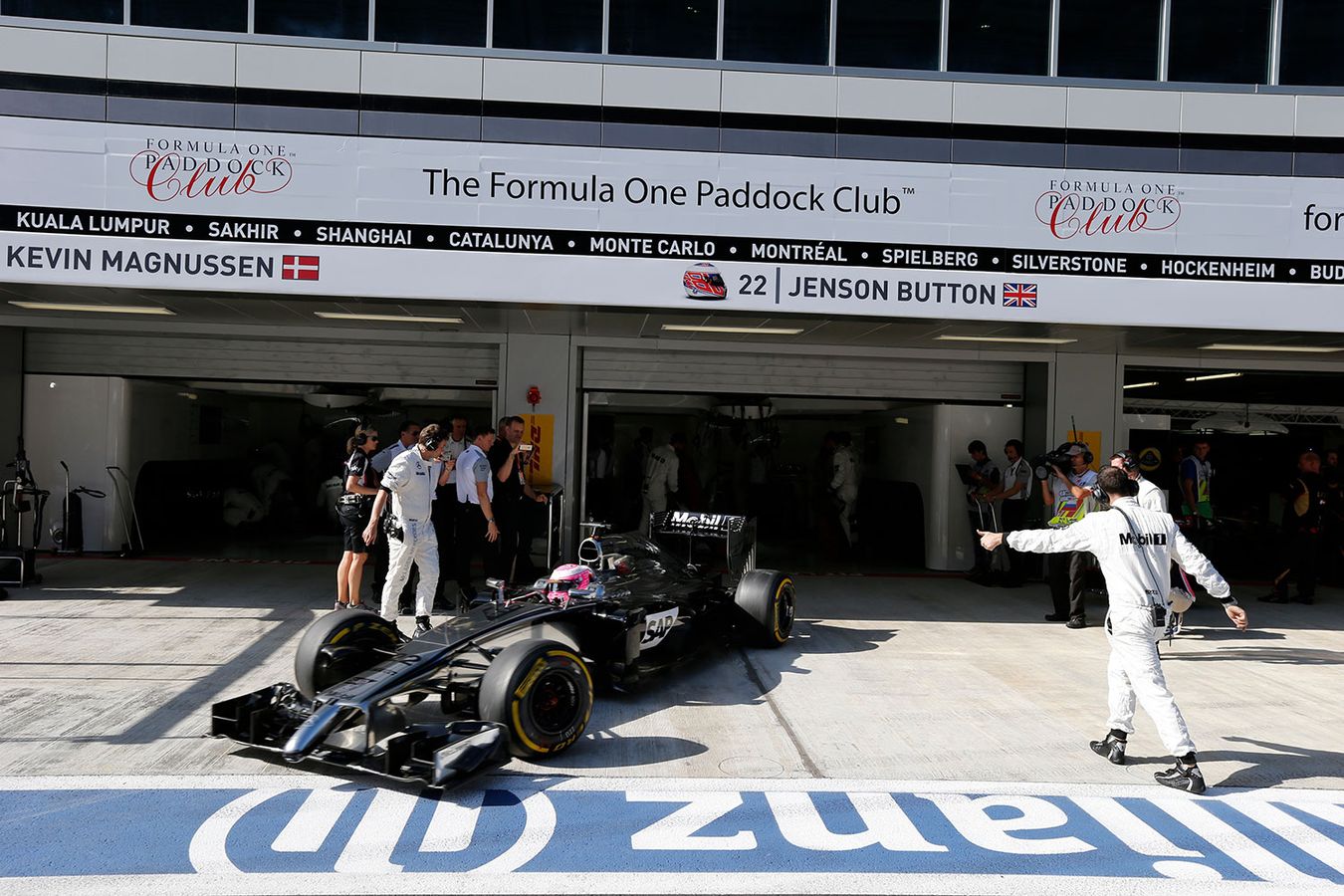 00:25       The cars arrive at the back of grid. The rules dictate that once they arrive at the rear of the field, they need to cut their engines and be pushed through the throng to their grid positions. This is when the grid is at its most frantic and exciting. 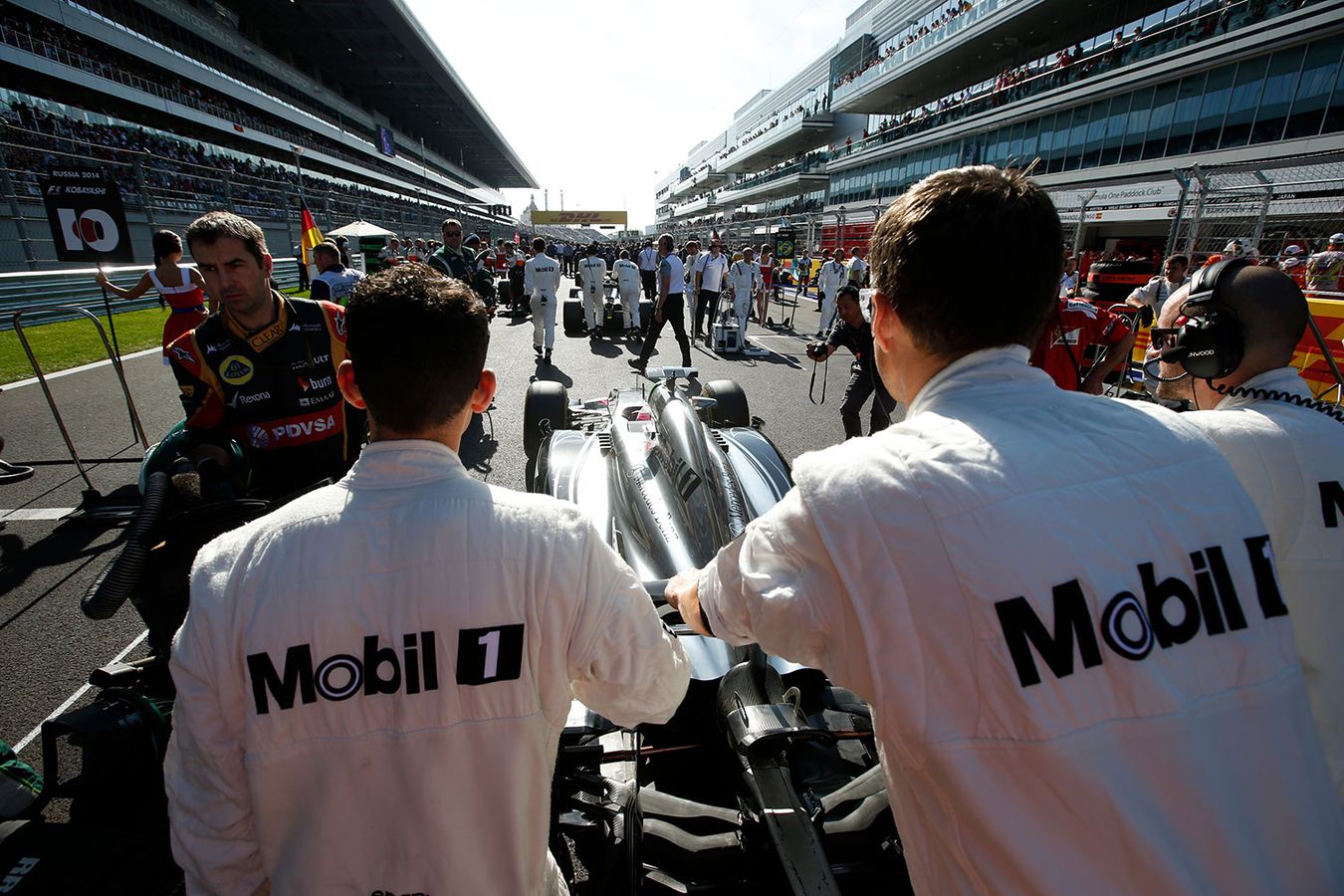 00:24       As soon as the car arrives at its appointed slot, it’s jumped on by an army of mechanics, who plug in coolers, laptops and cables to monitor the car’s life support systems. The race engineer, clipboard in hand, gives the instruction: “1m to fire-up.” 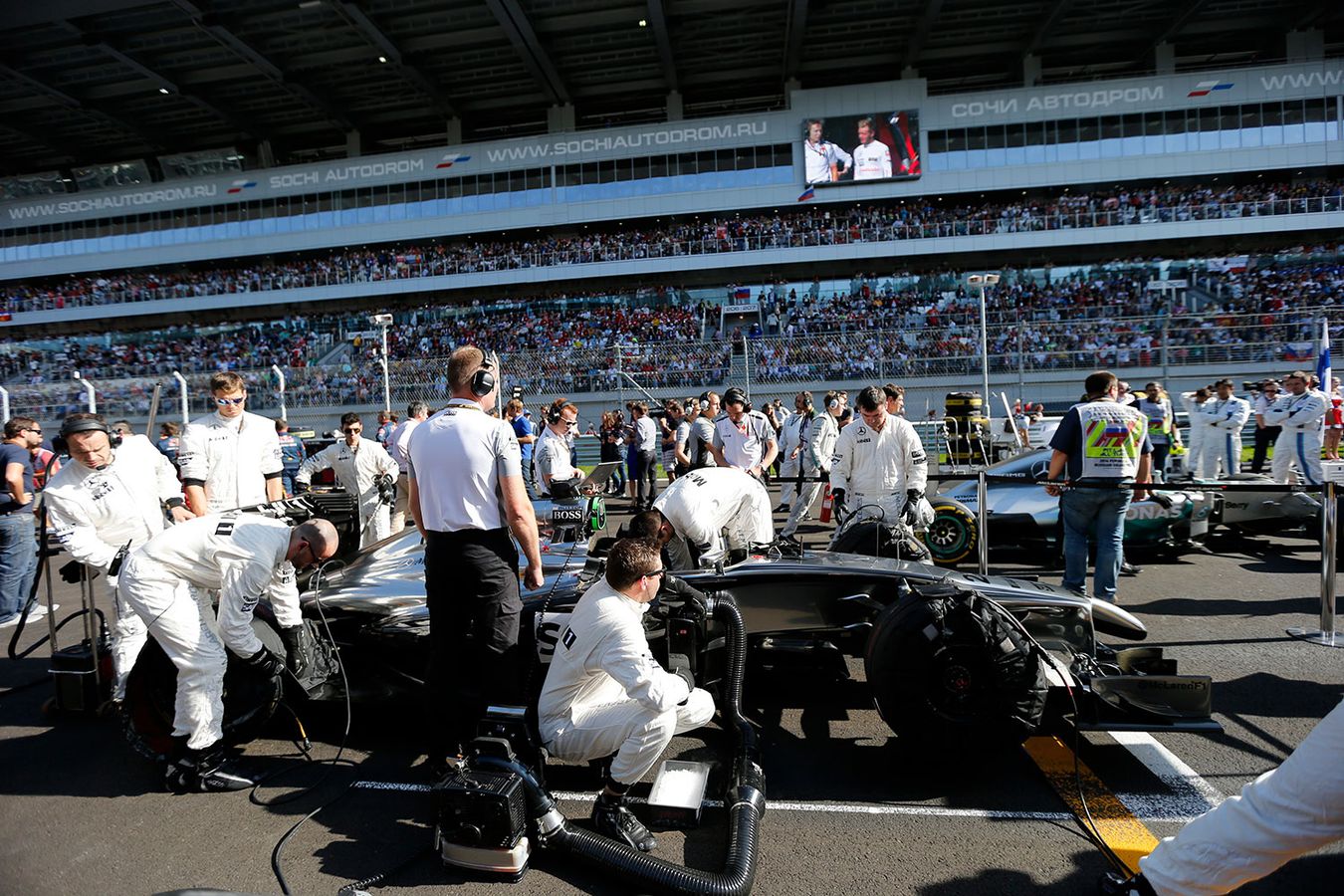 00:23       The ignition is flicked on, the rear wheels are removed – but kept in their heating blankets – and the engine is started. It turns over – enabling the water temperature to be measured and monitored. 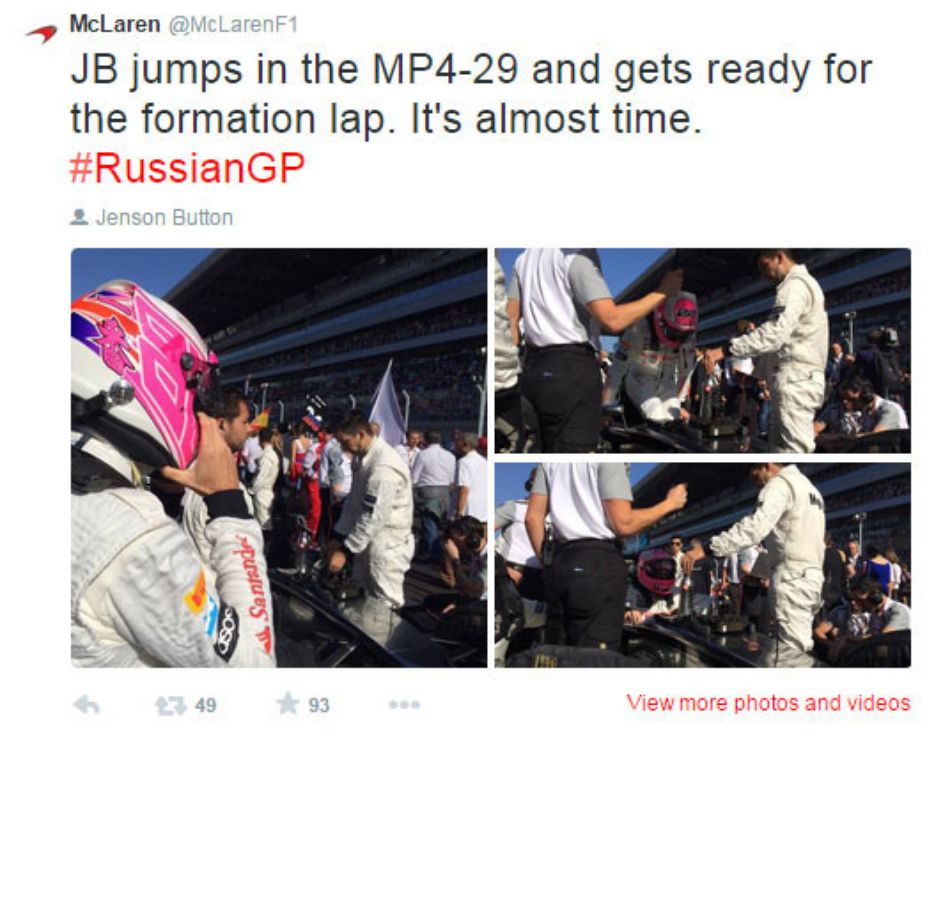 00:15       The pitlane closes – any cars that have yet to leave the pitlane will no longer be permitted to start from the grid. Front wing flap settings are cross-checked by the mechanics on the grid and the mechanics back at the garage, who’ll also adjust the spare front wings

00:12       The mechanics are instructed to carry out a wheelgun check, testing the hydraulic bottles to make sure there’s power in the system. The race engineer gives another instruction” “One minute to fire-up.” 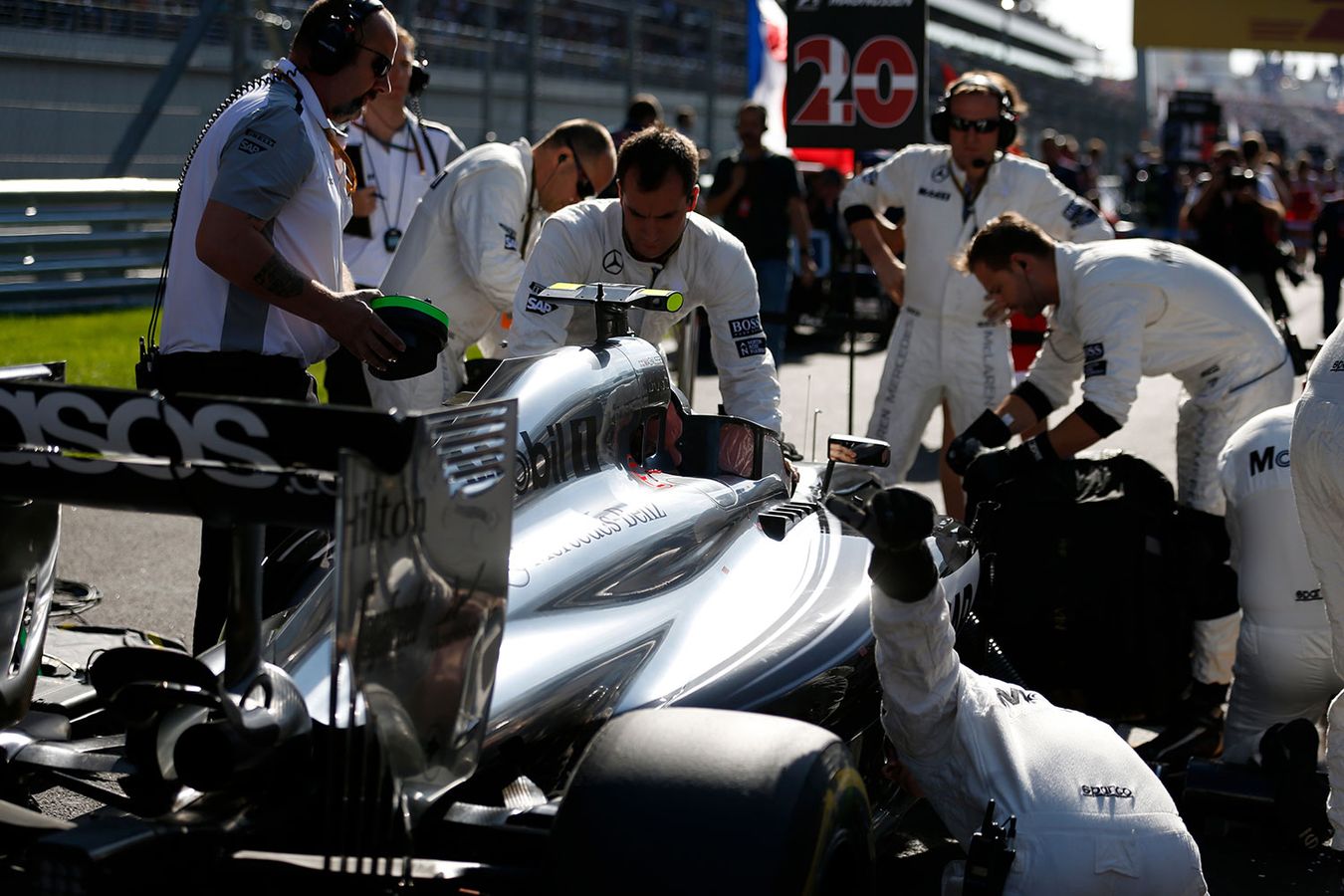 00:11       Another fire-up. The race engineers radio to the driver physios to make sure both Jenson and Kevin are ready to return to the grid after their hurried trips to the toilet. 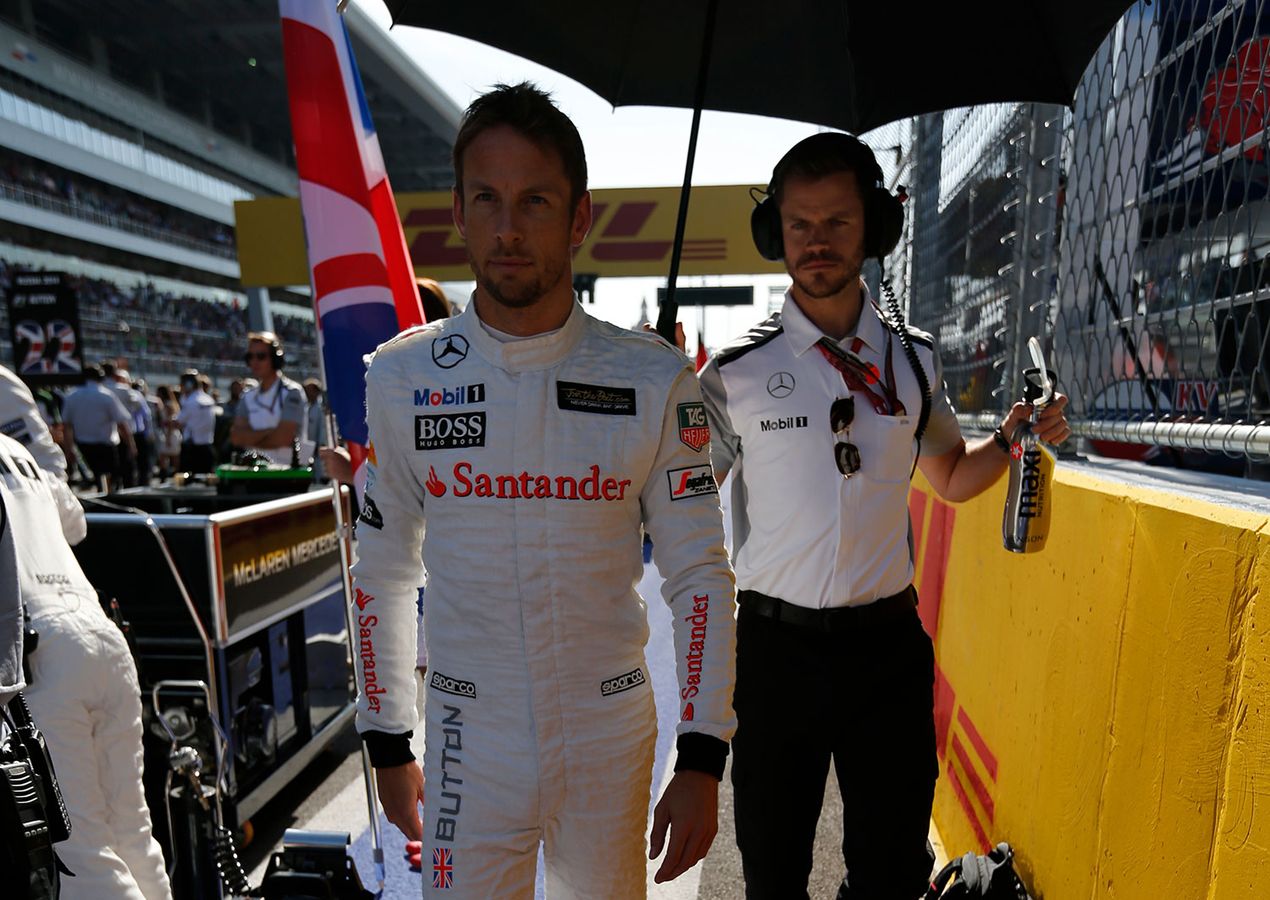 00:10       The drivers get suited up, pulling on their balaclava and zipping up their overalls. They fit their helmets and HANS devices and climb into the cockpit, where they’re strapped in by one of their mechanics. Once properly fitted and comfortable, they’ll don their gloves. The 10-minute marker is also the point at which the race start can be aborted due to weather conditions.

00:08       The wheels and tyres currently fitted to the car are removed. Another instruction: “One minute to fire-up.” 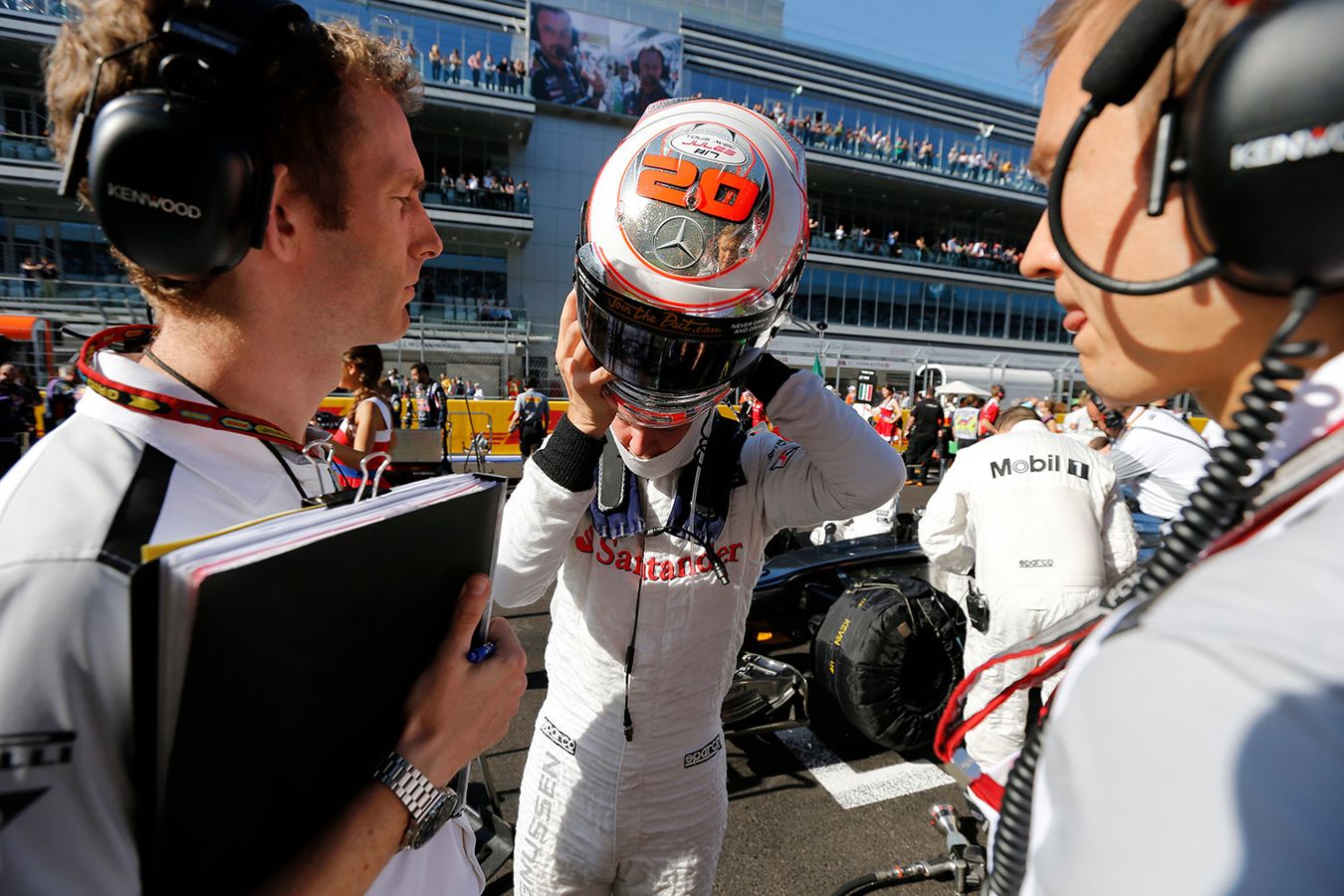 00:06       Race tyres are fitted. The set-number is cross-checked, tyre blankets are double-checked to ensure they’re still powered on, and that the tie-cords that tighten the blankets aren’t snagged between the tyres, the hubs and the brake ducts. 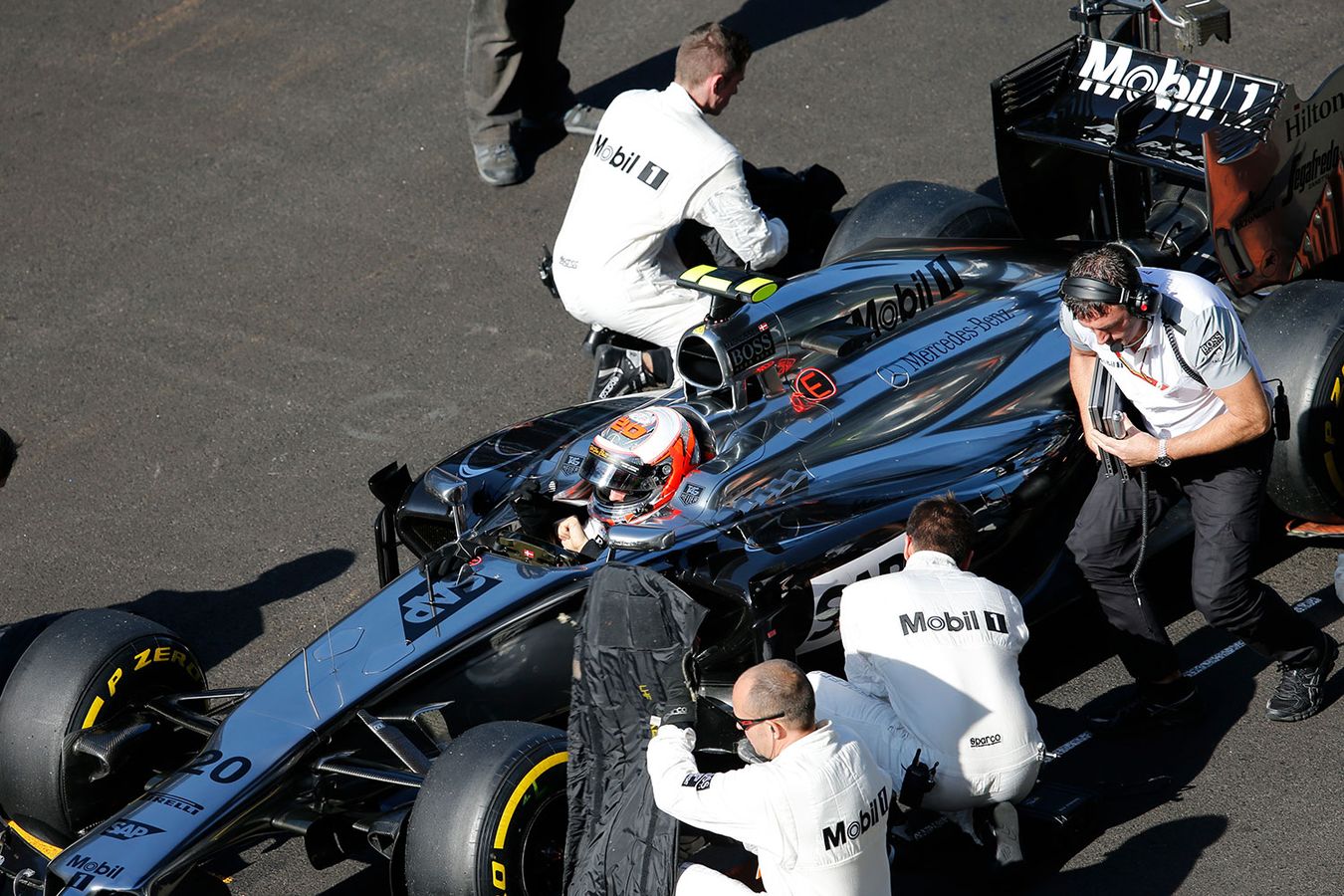 00:05       Four lights are illuminated on the starting gantry as the countdown continues.

Driver and race engineer conduct a quick radio check. The race engineer runs through a list of steering wheel switch settings ahead of the start. At the five-minute marker, the start can now be officially delayed – but with no option to change tyres. 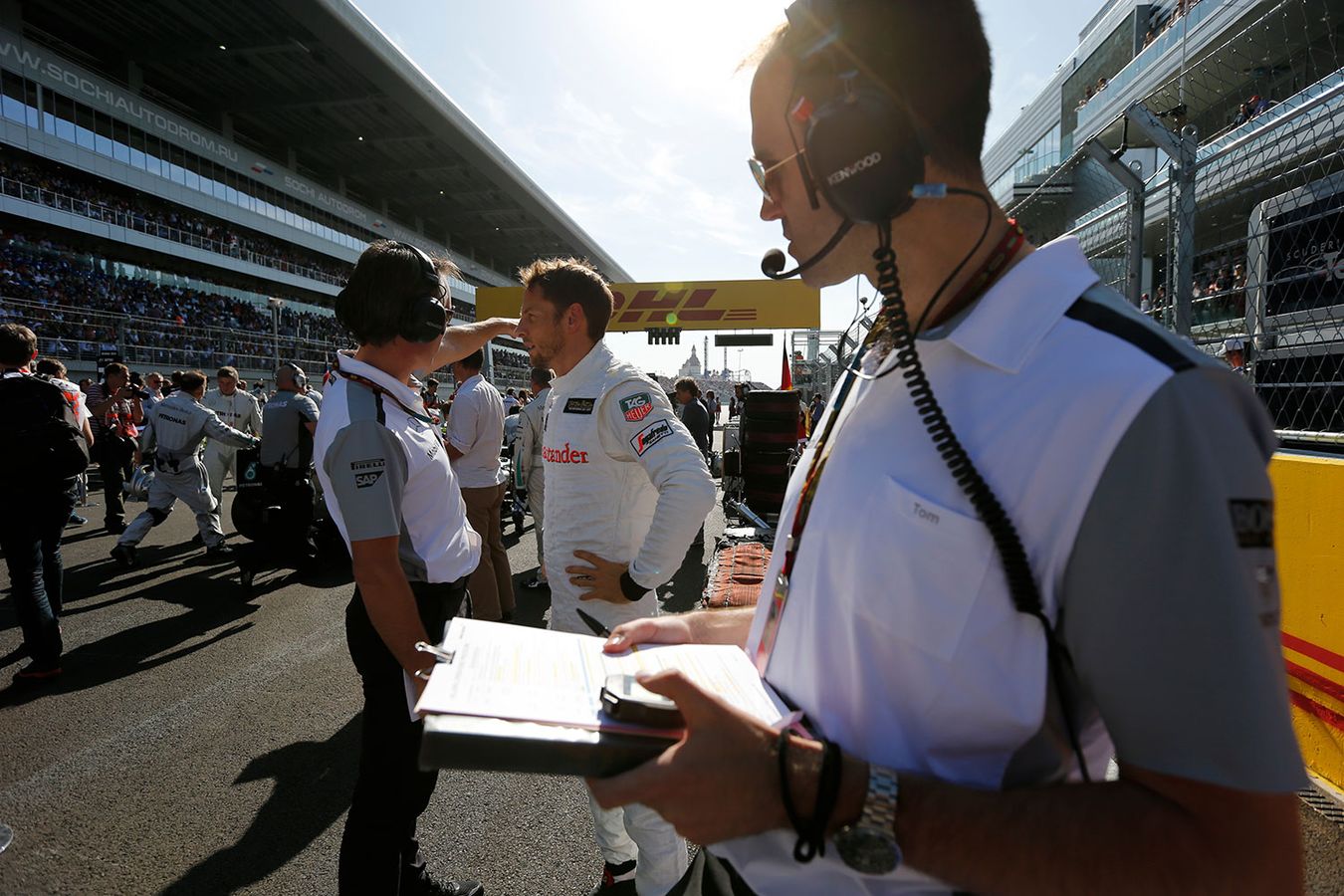 00:04       The mechanics raise the car up on its front and rear jacks, reaching underneath to remove the short-stands that have kept it suspended for the past 20 minutes. 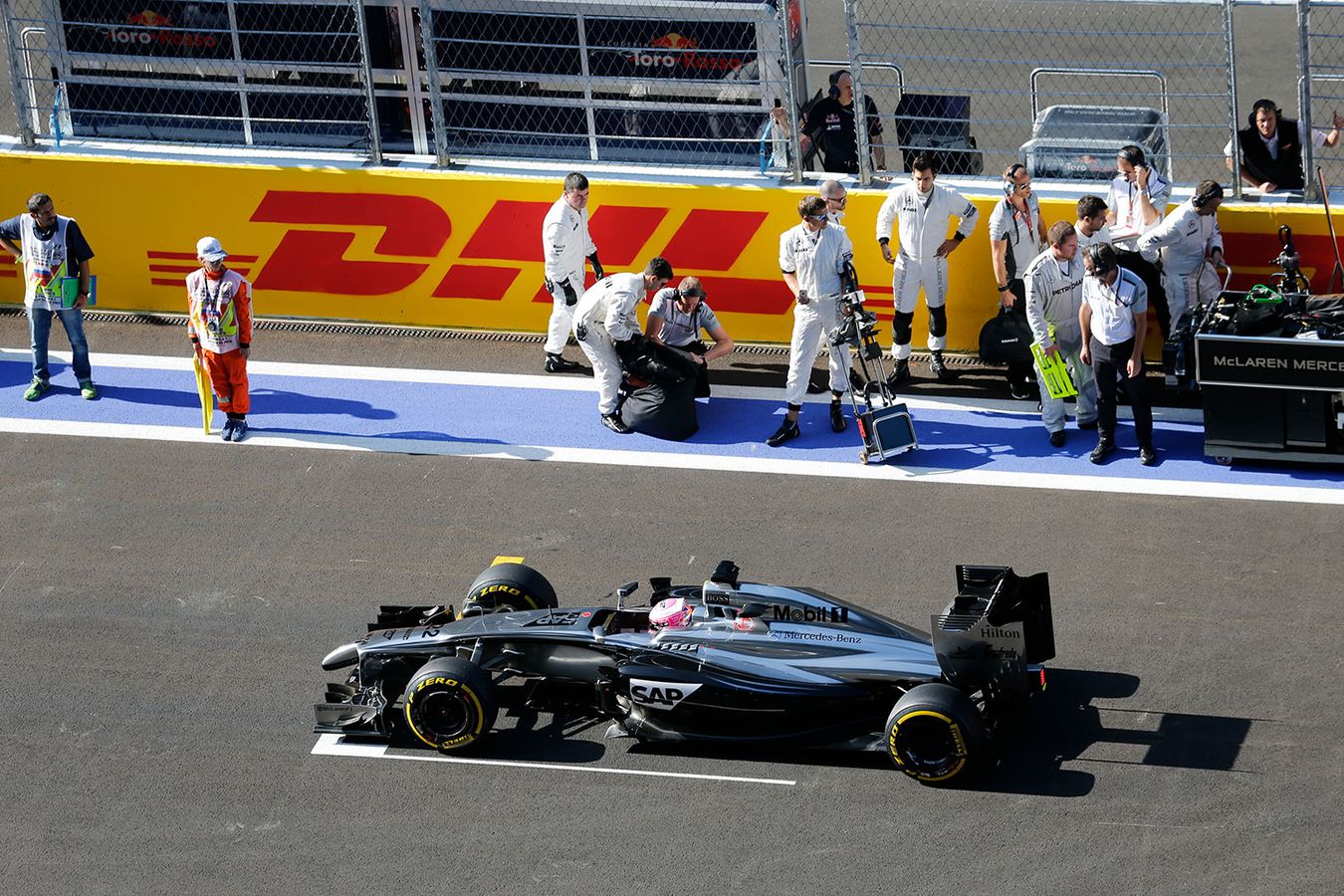 00:03       There are three lights illuminated on the starting gantry. Race tyres must be fitted by this point. The race engineer instructs the mechanics to remove all the fans, coolers and ancillaries that are currently plugged into the car

00:02       The tyre blankets are removed – the mechanics drape the unplugged covers over the tops of the wheels to keep the rubber up to temperature. 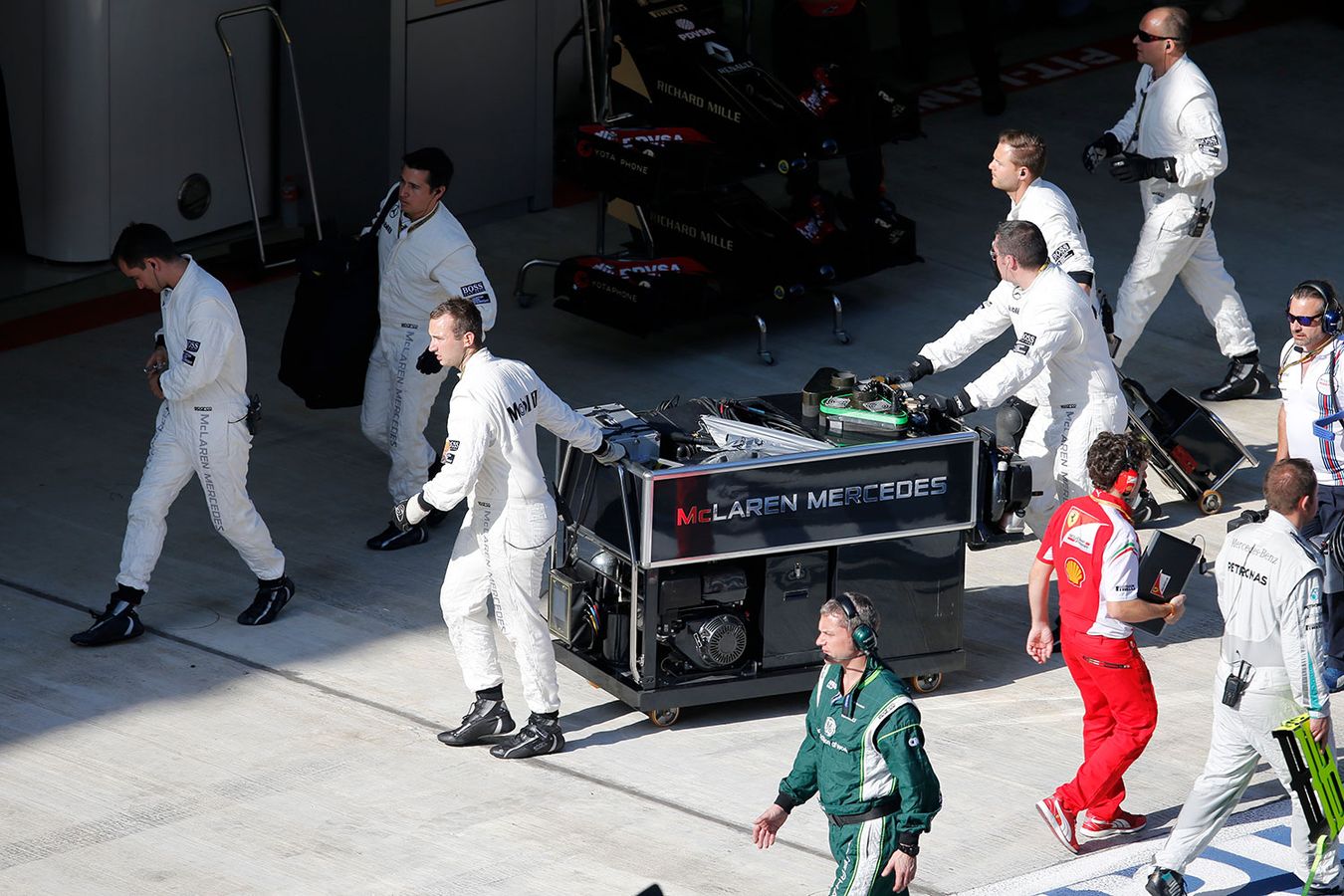 00:01       There are now two lights illuminated on the starting gantry. The race engineer gives the instruction: “Engine start. Start dropping the car down.” The car’s jacks are released. It is now effectively released and ready for the start.

30s left  “Clear the grid of personnel.” The 30s instruction is given to the driver. 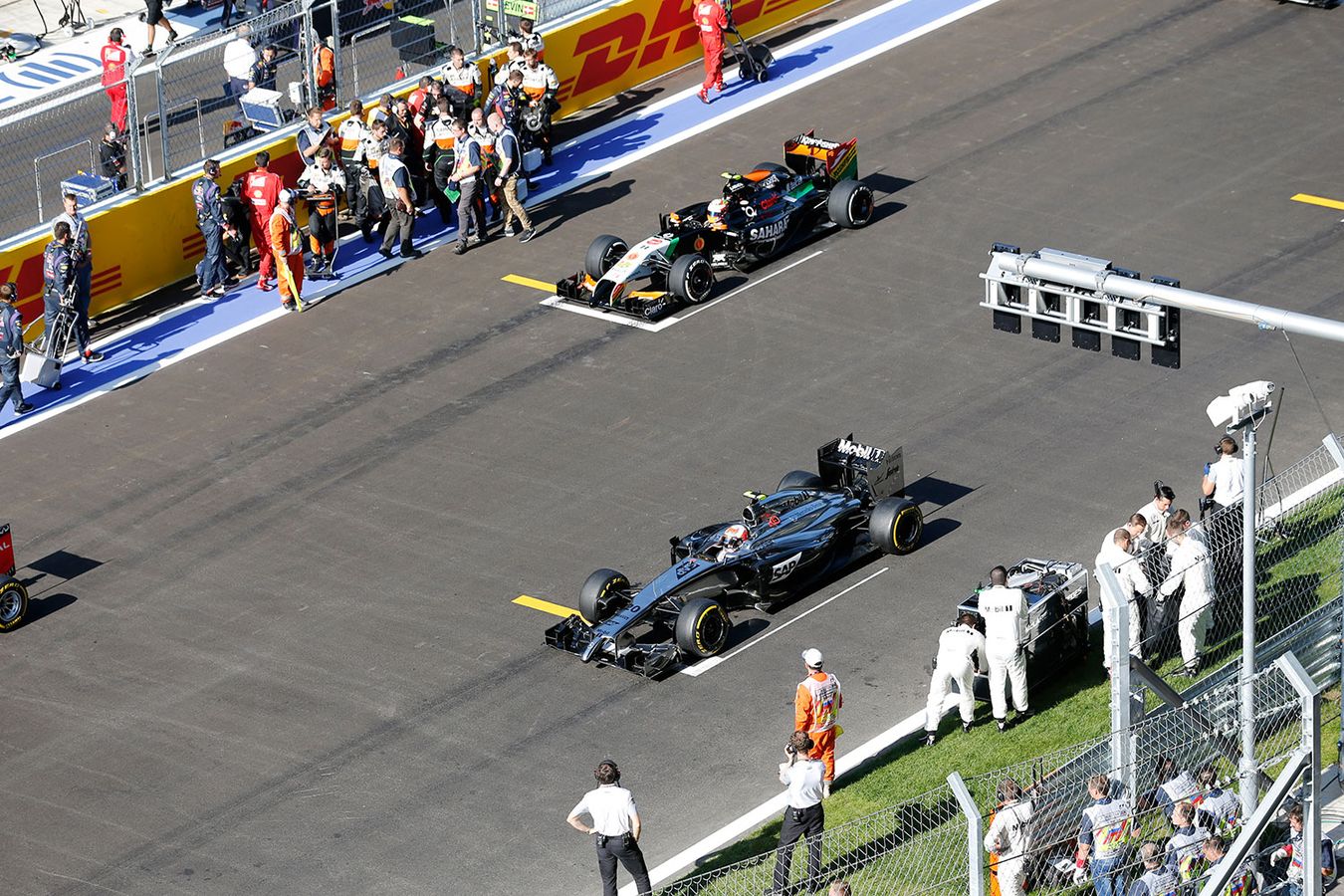 20s left  The driver is instructed over the radio to initiate the start systems.

15s left  There is one light illuminated on the starting gantry. All grid personnel must now be clear of the track and behind the white lines that mark the track limits. 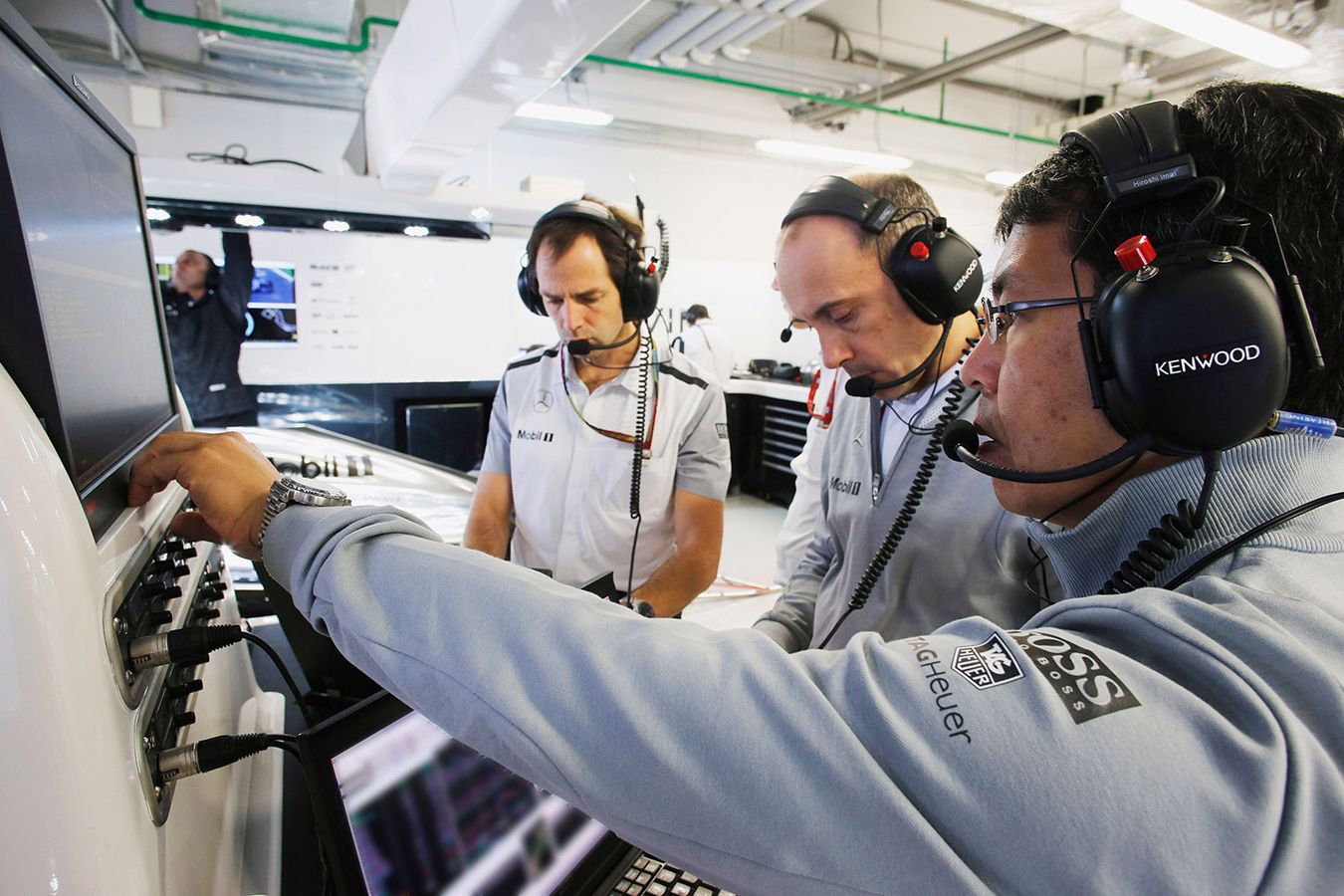 0s left     The red lights go out and the parade lap starts.

The race engineer and the performance engineer talk the driver through the last-minute system checks – including the learning of all the gears by the software, and the correct preparations for the start. 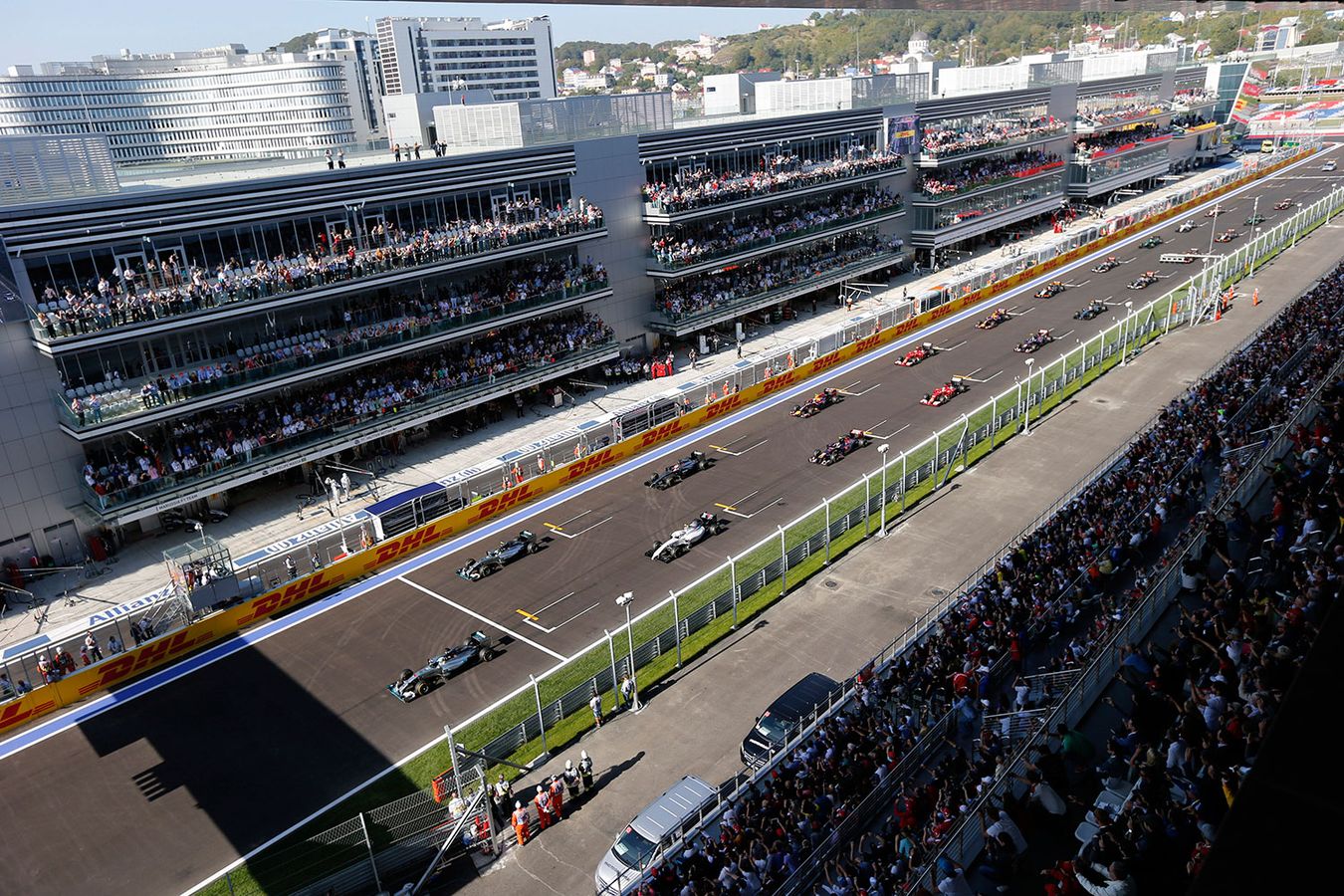 Meanwhile, back in the pitlane, gaggles of mechanics run back into the garage. They need to hurriedly prepare their pitstop equipment in case there’s a first-lap accident that requires and unscheduled tyre change or nosebox switch.

Shortly afterwards, the grid trollies – generators still running – arrive back and are pushed through to the back of the garage.

The mechanics, now all wearing their helmets and armed with their pitstop tools, take their seats inside the garage. To the rear, the huddle of guests clustered in front of the garage TV screens jostle for a better view.

The screens show the cars returning to the grid. As the noise just outside grows louder, the garage falls silent with anticipation.

Suddenly, the first pair of red lights illuminates. The race to get to the grid is over – the race to the finish line is just about to start…

Making tracks for the beach

#GetIn the MTC with McLaren