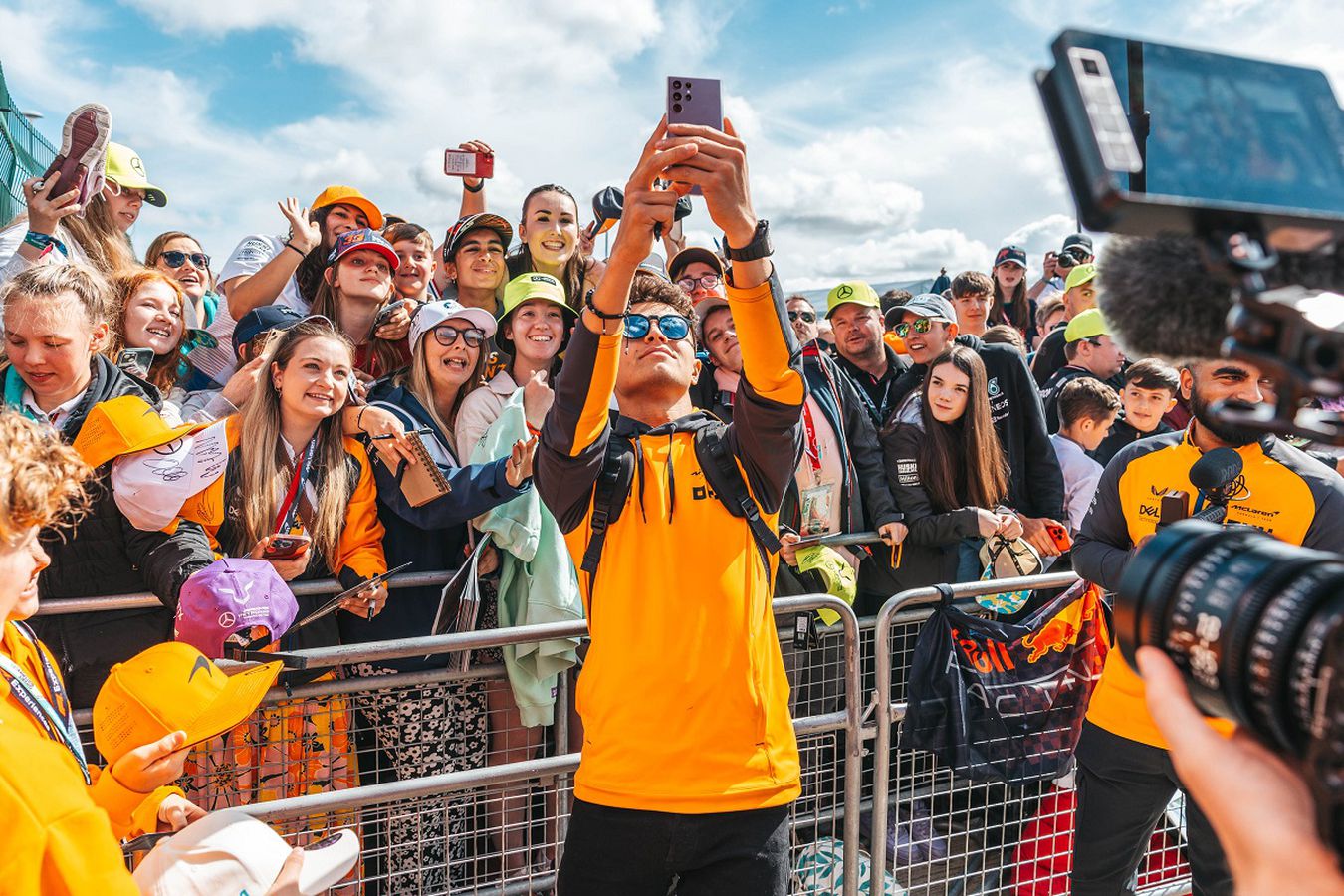 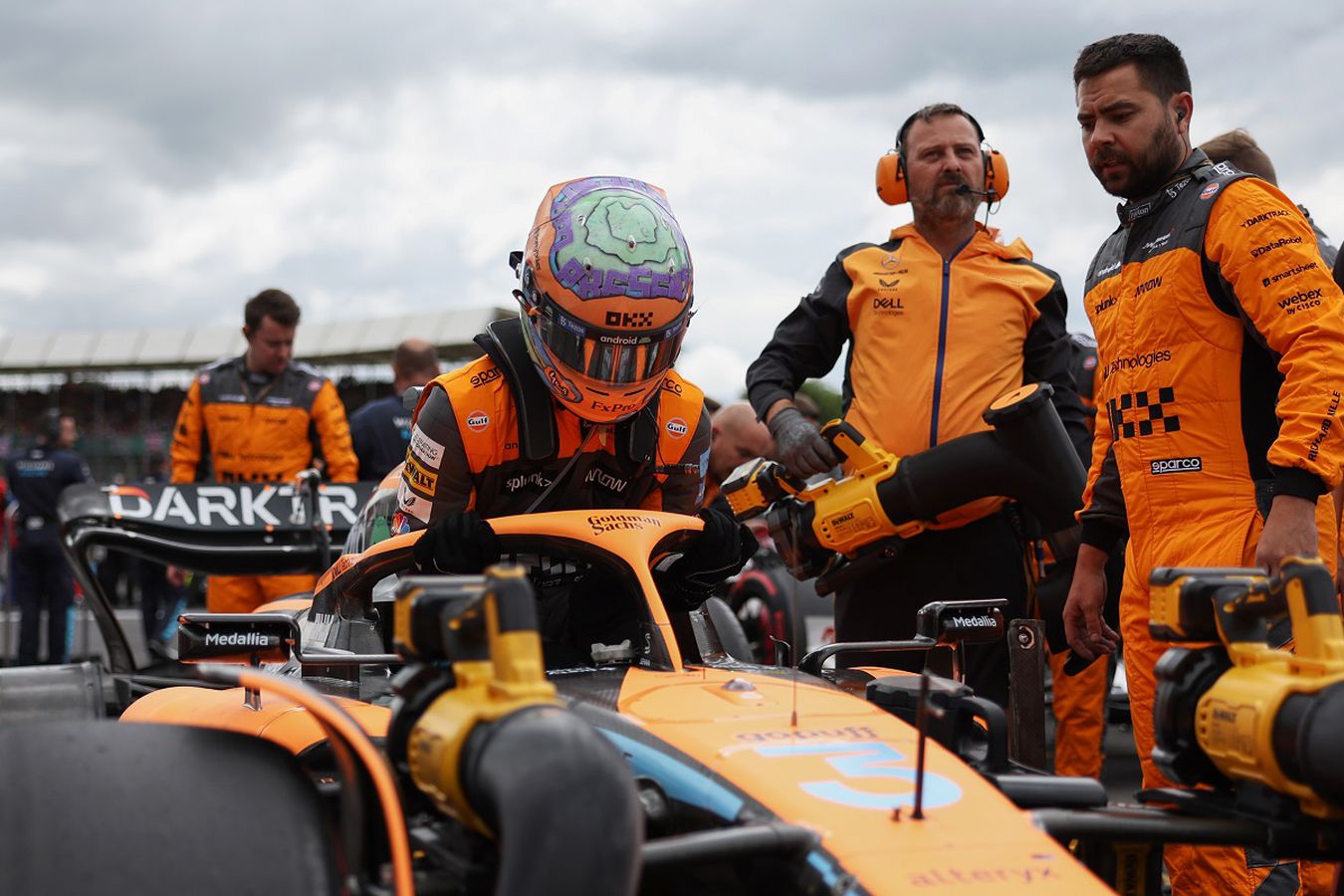 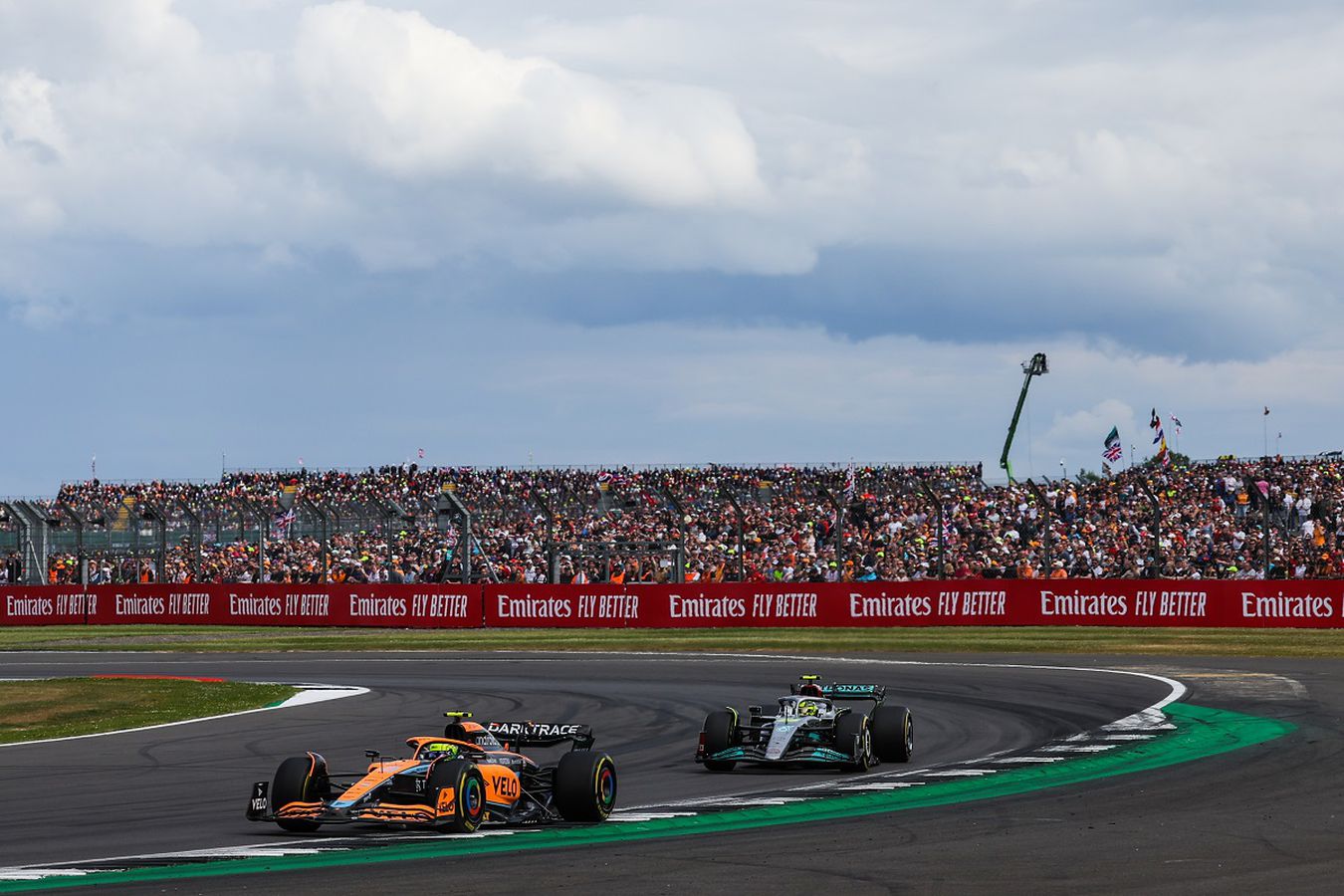 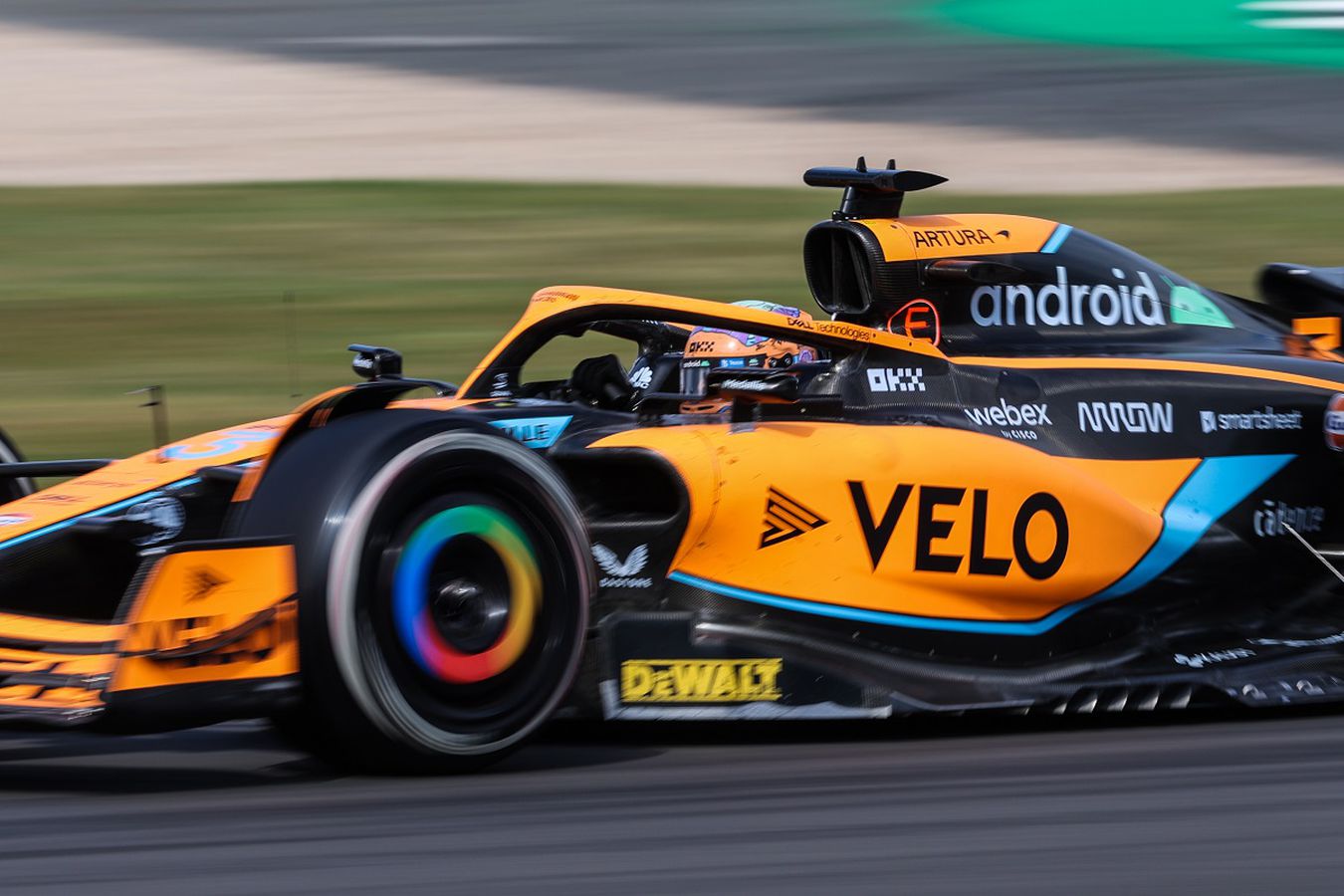 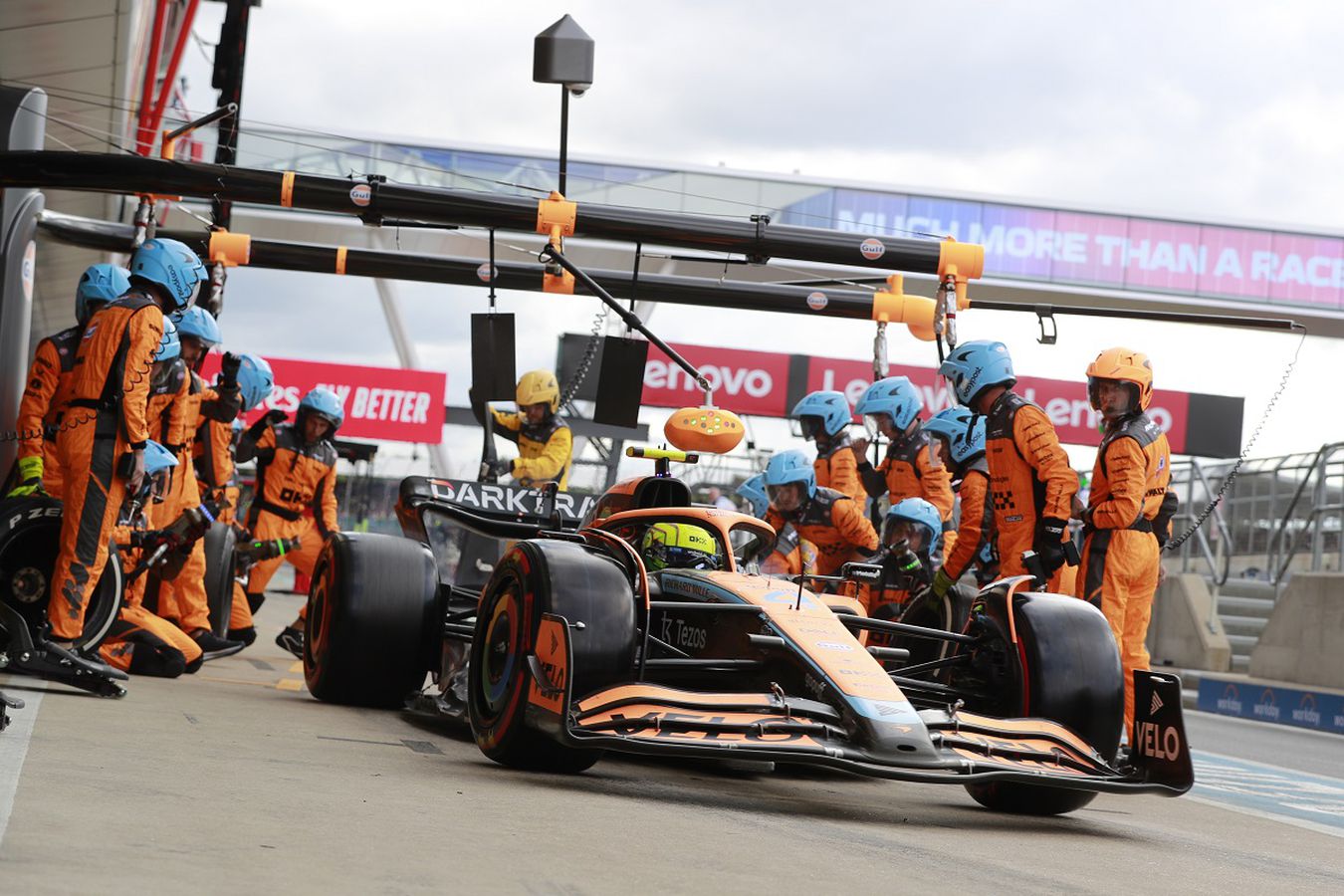 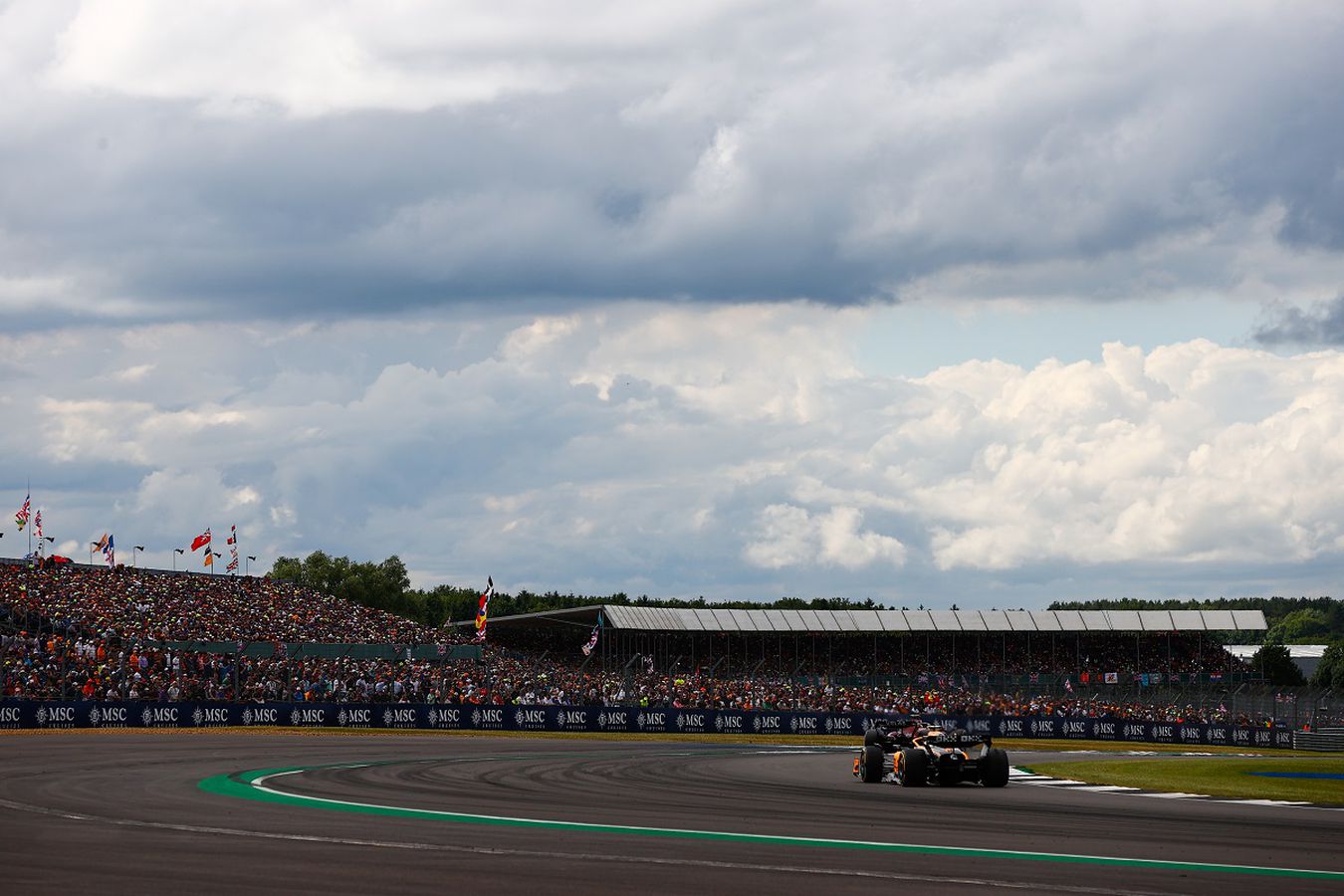 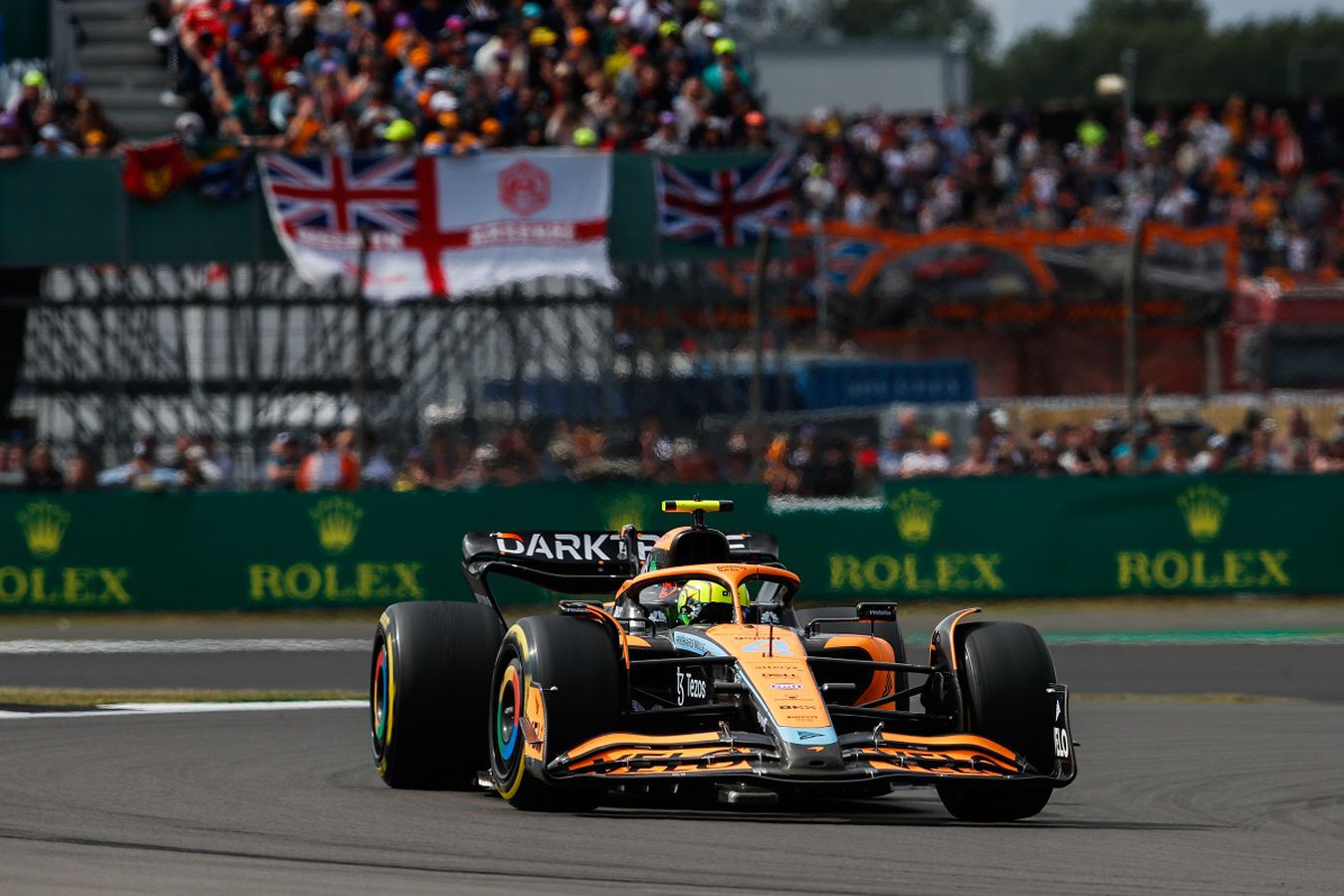 "It's been great to see the British fans, they've been amazing all weekend"

"It's been great to see the British fans, they've been amazing all weekend"

• 1/52 A major incident on the opening lap of the race caused great concern for drivers Zhou Guanyu and Alex Albon who were rushed to hospital but both were conscious.
• 1/52 George Russell was also out on the first lap, while Yuki Tsunoda and Esteban Ocon were able to continue after repairs to damage were made.
• 3/52 The remaining drivers returned to the grid for a restart with cars resuming in their original grid positions.
• 4/52 Lando started well at the second time of asking, overtaking Hamilton for fifth in the first racing lap.
• 6/52 Damage to Perez's front wing forced him to pit, giving Lando P4 briefly before Hamilton got his revenge down the home straight.
• 13/52 Verstappen was forced to pit with damage to his floor allowing Lando to retake P4.
• 20/52 Daniel pitted for Hard tyres, emerging from the pit-lane in P13.
• 33/52 Daniel boxed to have his rear wing flag shut manually and also switch to Softs.
• 34/52 Lando was the last driver to swap tyres, opting for new Hards. He came out ahead of Alonso and behind Perez in P5.
• 40/52 Safety car was deployed after Ocon stopped on track. Lando and Daniel both pitted for fresh Soft tyres.
• 52/52 An exciting finish to the race saw Carlos Sainz win his first career Grand Prix with Perez and Hamilton rounding out the top three.

"Firstly, it was great to see Zhou, Alex and George get out of their cars safely today, it's never nice to see an accident like that, so I'm glad the safety equipment did its job properly. On our side, a decent race. I felt like we deserved P5, but unfortunately we lost out at the final pit stop under the safety car.  I think we drove a good race. We did a lot of things very well today and we had reasonable pace in the car, it was just maybe a late call with the pitstop and that cost us one position today. I'm not annoyed, I think we still got some good points, but it could have been one more place.

"Finally, it's been great to see the British fans this weekend, they've been amazing all weekend come rain or shine. I had a really great run on the second restart and could see the fans cheering for me in the stands, which was awesome to see. I already can't wait to come back next year!"

"Firstly, I’m glad to hear the drivers are OK after that first lap incident. For our race, the car just didn’t really seem to operate at the same level of grip as the others. I could just feel it through the tyres as well, trying to carry speed. It was just a bit odd, so we have a bit of investigating to do. Then we had an issue with DRS which meant I couldn’t use it after lap 31 which was also a bit of a shame. Obviously, it’s tough to overtake with that as well – but simply we weren’t really quick enough anyway today. It was a bit of a lonely afternoon."

"The most important thing is that all drivers involved in accidents today, F1 and Formula 2, are doing well. Motorsport works hard to improve safety and what we saw today demonstrates why that is essential.

"For us, the positive we take away is that we had a more competitive car this weekend and we’re back in the points after two difficult races. Lando looked competitive all day but unfortunately lost out to Fernando in the final pit-stop, behind the Safety Car. Daniel’s weekend didn’t go to plan, which will need careful analysis over the next few days. He wasn’t in a position to deliver competitive lap-times yesterday and today. In addition, he experienced a DRS failure that required an additional pit-stop mid race and required him to run without the DRS in the second half of the race.

"So, some positive signs and, as always, a lot to learn before we get going again five days from now in Austria, on a circuit where we’ve had tremendous results in recent years. Before then, I have to say thanks to the entire team here at the track and back at the factory, together with our colleagues at HPP, for all of their efforts this week. I also want to thank Silverstone and the fans that made it special. The crowd has been massive, the atmosphere exceptional, and it’s wonderful to experience together with a lot of our colleagues from the factory who were cheering for us as well on the grandstands."

Working around the clock

It's Lando's turn to teach Daniel some British slang

Not the British Grand Prix

It’s the British Grand Prix, and what could be more fitting than our Lando Norris quiz