The Portuguese Grand Prix occupies a curious niche in the history of Formula 1. Despite this year being only its 18th appearance on calendar in this, the 72nd year of the World Championship, it feels like a race with a lot more history than that. Part of it comes from the peripatetic nature of the grand prix, Portimão is its fourth home, with the Autódromo Internacional do Algarve following the Boavista Street Circuit in Porto (1958, 1960), the parkland Circuito de Monsanto (1959) near Lisbon and then more recently the Circuito do Estoril to the west of the capital (1984 – 1996). In the early years of the World Championship there was also a string of non-championship Portuguese Grand Prix – and the quality of the field in those years is best expressed by some of the names on the winner’s trophy: Eugenio Castellotti; José Froilán González; Juan Manuel Fangio.

When the Portuguese Grand Prix reappeared during the turbo era in the beach town of Estoril, it did so at a time when McLaren was fighting for titles – including the 1984 title decider that remains the closest season in F1 history. It played host to some of our most famous – and infamous – moments, and some interesting statistical anomalies.

…for Bruce. While McLaren has only raced in Portuguese Grands Prix at Estoril and Portimão, our name has appeared at all four Portuguese Grand Prix venues. Bruce McLaren appeared in the 1959 race at Monsanto and the 1960 race at Boavista. Bruce retired from third place and recorded a DNF in 1959 when his Cooper developed a terminal transmission problem at half distance. In 1960, however, Boavista treated him rather better and from a starting position of sixth, he finished P2. It must have seemed a very lonely race. Bruce finished 58 seconds behind Cooper team-mate Jack Brabham – who secured the Drivers’ Championship in Portugal – but 55 seconds ahead of third-placed Jim Clark.

Our trophy cabinet at the McLaren Technology Centre boasts the prizes from 182 F1 victories, split between 30 different grands prix. Four of those races have been won only once. The other 26 have been won multiple times, and 25 of those have multiple McLaren winners. The Portuguese Grand Prix is the only race we’ve won multiple times but with only one drivers’ name etched into the winner’s trophy. That driver is Alain Prost, winner of the Portuguese Grand Prix for McLaren in 1984, 1987 and 1988. 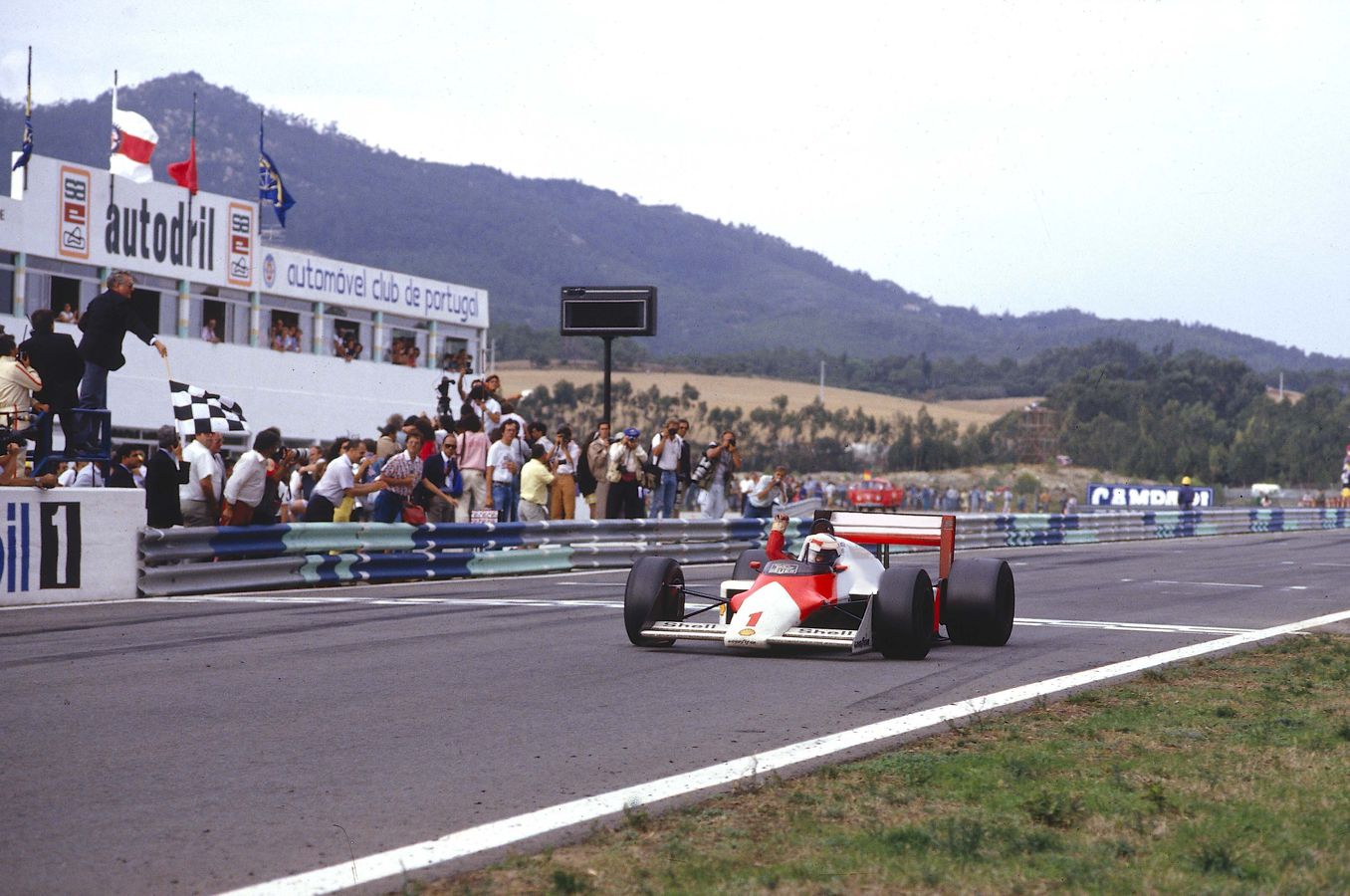 That’s all that separated Niki Lauda and Prost at the end of the 1984 season. Estoril’s inaugural grand prix was also the season finale in 1984 and a title showdown between the two McLaren drivers. With the Constructors’ Championship secure, and the drivers 30 points clear of their nearest challenger, Portugal ’84 was an uncomplicated shoot-out. Niki led the Drivers’ Championship with 66 points to Alain’s 62.5 – the half point courtesy of Alain’s victory at Monaco, red-flagged at less than 75% distance. Alain qualified P2, Niki a disastrous P11. The scoring in 1984 as 9-6-4-3-2-1, thus second place would be enough for Niki, whatever his team-mate did. A young Alain did his bit by winning the race and was stoic in the face of disappointment when his vastly more experienced team-mate somehow did enough to drag himself up into the P2 he needed.

“It was the worst race imaginable for me. I have qualified 11th; Prost was on the front row,” recalled Niki in 2018. “That wasn’t so bad as I was sure I had the speed in the race to work my way through the field. Then the race started and I couldn’t pass anybody because on the second lap I damaged a turbocharger. I had the boost all the way up, but it wasn’t delivering the power and I was stuck behind Stefan Johansson and some other guys for what felt like forever. I was struggling and fighting like crazy and eventually got up as high as third. Then I got lucky: Mansell retired with brake trouble, I finished second and took the championship by half a point.”

…attempts to start the race at the 1988 Portuguese Grand Prix. Whenever an attempt is made to document the relationship between Ayrton Senna and Alain Prost, the 1988 Portuguese Grand Prix is usually front and centre. We took our ninth front row lock-out of the season, with Alain on pole and Ayrton alongside. The first start was halted on the grid when former McLaren driver Andrea de Cesaris stalled, the second was red flagged for a big start-line crash.

The race finally got going at the third attempt – Ayrton got the better start, Alain pushed him wide but just about left a car’s width for Ayrton to squeeze through without running onto the grass. At the end of the lap, Alain lined up to pass him team-mate, dived to the inside and, at 280 km/h, Ayrton drifted towards the pit wall. Alain just squeezed through the gap – but after the race words were exchanged… 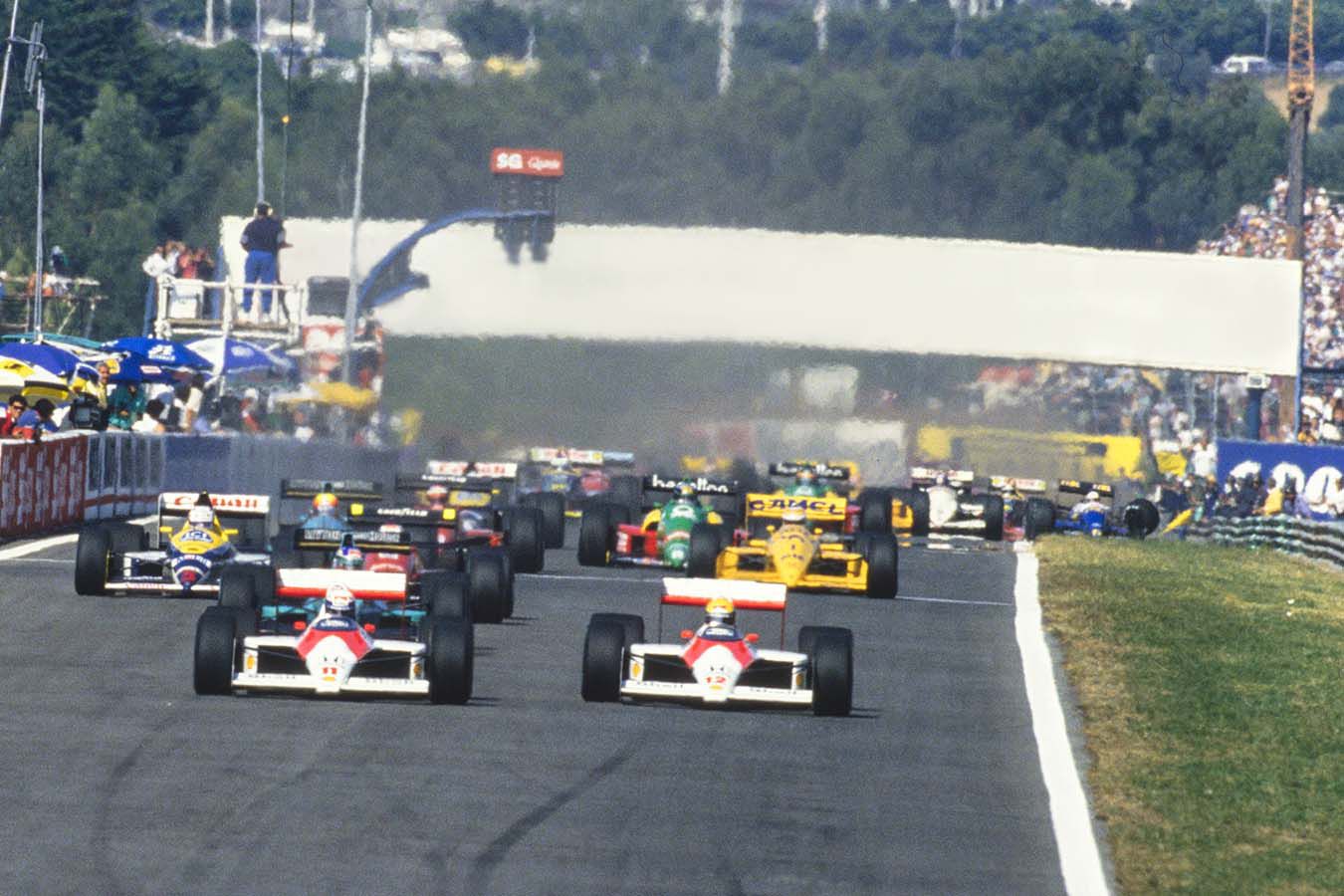 Back in 2014, Jenson Button slipped past Daniel Ricciardo on a Safety Car restart to take the lead of the Hungarian Grand Prix for a lap before making a pit-stop. At the time, this was a fairly innocuous moment – but it would prove to be the last time a McLaren led a grand prix until 2020.

Last year, Carlos Sainz led a lap behind the Safety Car at Monza – after Lewis Hamilton pitted into the closed pitlane – but had his first taste of leading a live field four races later in Portugal. After both Carlos and Lando Norris got a rocket start, the Soft tyre had a huge advantage and allowed Carlos to slalom through the field from seventh position to take the lead on lap two and hold it until lap six when the front-running cars got their Medium tyres up to temperature. Amid much cheering in the garage, the race engineers had a desperate job to remind Carlos and Lando that they had their own races to run, and should not waste time fighting for positions at the head of the field – but it was very nice while it lasted…

In the Algarve at last