Your guide to McLaren HomeFest 2.0

Your guide to McLaren HomeFest 2.0

Any great festival leaves you wanting more and last year’s McLaren HomeFest did just that. While the British Grand Prix isn’t taking place behind closed doors this season – hurrah! – we know that many of you still won’t be able to make it to Silverstone. So, for those of you who can’t join us at the track, and even those of you who can, McLaren HomeFest, Formula 1’s ultimate virtual fan festival, is back.

Last year, we provided you with a list of the dos and don’ts to get the most out of your festival experience, and although many of us have spent much of the past 12 months cooped up inside, a lot has happened in that time, so we thought we’d remind you of some of the dos and don’ts for this year’s McLaren HomeFest.

In this age of e-tickets and QR codes, holding a physical piece of paper that grants you access to something has become an increasingly rare occurrence. Sometimes the old ways are best though, and that includes downloading and printing your McLaren HomeFest tickets from our essential fan toolkit. Unless it rains, of course…

Don't get a paper cut

In the fan toolkit, you’ll find what looks like an MCL35M that’s been trodden on by Godzilla. Don’t worry, it hasn’t. This flat-pack MCL35M is ready and waiting to be brought to life with your help. We’re also running an MCL35M model masterclass so you can build your very own McLaren F1 car, and there’s a prize for the best attempt.

Look, what you get up to in the privacy of your own home is nobody’s business but yours. If you want to walk around the place in the buff, you go for it – jumping up and down in front of the TV as Lando Norris and Daniel Ricciardo do their thing on track while you do, well, your thing.

The British Grand Prix Collection has arrived! Get your special limited-quantity items while stocks last

As for those of you committed to rocking your birthday suit, please, for the love of God, put some pants on. Or print off some of our McLaren HomeFest bunting and use it to cover your modesty – at least for the neighbours’ sake.

Wait. Who is headlining? Lando and Daniel, of course. They’ve been entertaining you all season and now it’s time for the big one, our home race. Quite what they’ve got in store for you, we’re not entirely sure. They’re keeping their headline set under wraps. Rumour has it, Lando is planning to crowd surf from Silverstone to the McLaren Technology Centre (MTC), while Daniel has an inflatable honey badger he’s going to fire out of a cannon. Whatever happens, you can be sure they’ll be giving it their all on track.

Oh, before we forget. Actually, how could we forget? There’s one other all-important headline act this year. No, it’s not Stormzy or Dolly Parton. It’s you, the fans. A festival isn’t a festival without the fans. You’re what made McLaren HomeFest so special last time and we’re looking forward to seeing you give it all you’ve got again this year; waving your hands in the air like you just don’t care and showing your support by sharing your McLaren HomeFest set-up on social. We want social media to be awash with papaya this weekend so get posting photos and videos of what you’re up to using the hashtag #McLarenHomeFest and we’ll do the rest.

Throwback to this epic fan pic from McLaren HomeFest 2020! 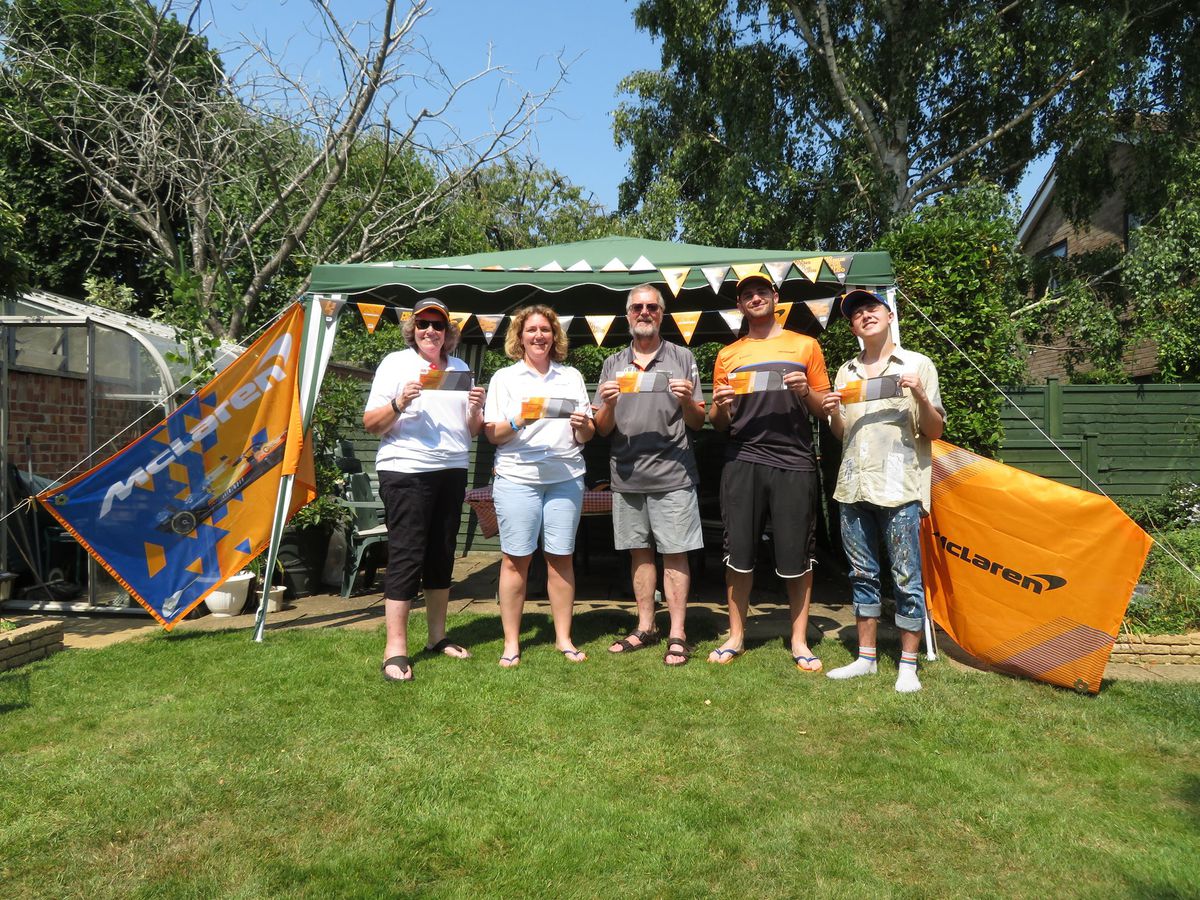 Throwback to this epic fan pic from McLaren HomeFest 2020!

Speaking of waving your hands in the air like you just don’t care, we figured you’d need some tunes to do that to, so we got two of the music industry’s biggest names… ahem, Lando Norris and Daniel Ricciardo, ahem… to put together some sonorous Spotify playlists. How best to describe these playlists? Well, in the words of Barney Stinson from How I Met Your Mother: “People often think that a good mix should rise and fall but people are wrong, it should be all rise baby. Now prepare yourselves for an audio journey into the white-hot centre of adrenaline…”

Once you’re all psyched up, you’re going to need something to keep you riding that adrenaline high and, luckily for you, we’ve got just the thing. Yep, we’re talking about the McLaren App. If you want live updates, commentary, insight from the team, interactive content and behind-the-scenes access, this is the app you need in your life. That’s right, much like a puppy, the McLaren App isn’t just for Christmas, or the British Grand Prix, it’s for life.

For last year’s McLaren HomeFest, we gave you the gift of culinary gems like the Brundle Banger, Scenario 7 Chicken and BBQ-roasted Buttonut Squash. They went down a treat, but this year we’ve raised the gastronomic bar even higher with new dishes and a few tipples to go with them. We’re talking Holy Mac ‘n’ Cheese Balls – yes, there is indeed a recipe for them – and cocktails such as the Piña Colando and Seidl Spritz to wash them down. 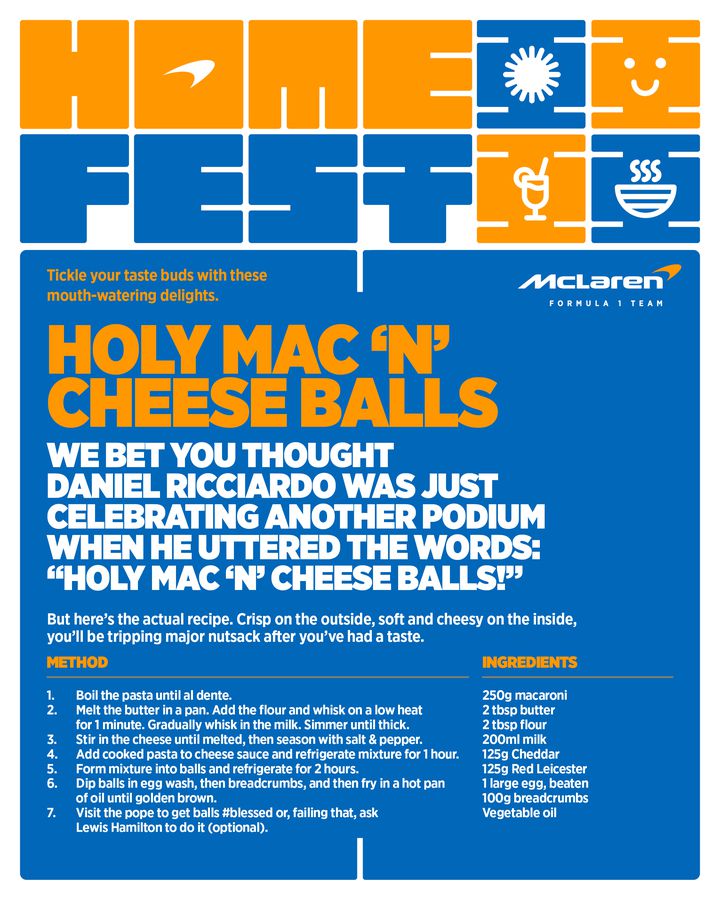 Where are all these recipes, you ask? Just head to McLarenHomeFest.com.

Do get your game on

Let’s be honest, anyone who likes motorsport tends to be competitive, even if it’s only a tiny bit. There’s nothing wrong with that. There’s no shame here, you’re in a safe place. At McLaren, we’ve devised something to scratch that competitive itch: McLaren Mini Prix. It’s a brand new mobile and desktop game that we’re launching in the build-up to the British Grand Prix, which gives you the chance to race the MCL35M around the MTC and win prizes if you set a fast time.

As with any game before its launch, it had to undergo plenty of testing – which we signed Lando up to do. The great news is that he loves the game. The bad news is he loves it a little too much. Andrea Stella has already had to confiscate Lando’s phone on multiple occasions after catching him playing the game in lessons at Stella School. Sorry, we mean engineering meetings at the MTC.

We’ve got a lot of signed merchandise to give away over the weekend, so follow our channels closely for updates on exactly what you can win and, crucially, how you can win it. For several hundred fans who can’t make it to the track, we’re running a virtual Silverstone viewing experience on race day via Webex by Cisco. Enter the competition and you could be enjoying exclusive backstage access with interviews from the drivers, behind-the-scenes action from the MTC, interactive polls and coverage of the race itself.

Those of you who joined us for McLaren HomeFest last year will remember that, thanks to our friends at VELO, the party didn’t stop when the chequered flag fell. They threw an epic afterparty and they’re at it again this year with VELO Sonic Circuit, featuring acclaimed drum and bass DJ Wilkinson. You’ll be able to watch him perform live on the VELO YouTube channel, so make sure you subscribe and you’ll be all set to dance the night away.

Ending the triple-header in style at the Austrian GP