It’s reasonable to say we’ve seen rather a lot of the Bahrain International Circuit in the last few months. After two races less than four months ago and 2021’s one-and-only pre-season test the week before last, it’s taken on a certain familiarity. In this case though, familiarity does not breed contempt, and anticipation for this weekend’s season-opening Bahrain Grand Prix could not be keener. This is the third time, following 2006 and 2010, when Bahrain has stood-in for Australia as the venue for Formula 1’s opener. As we came away from both of those races with a trophy, starting the season in Sakhir is something we’re very keen on.

Here are a few of the more quirky statistics from our 16 years at Sakhir.

McLaren holds the lap record for the Bahrain International Circuit’s Grand Prix layout, courtesy of a 1m31.447s lap posted by Pedro de la Rosa on lap 43 of the 2005 Bahrain Grand Prix. It’s a rarity on the 2021 calendar in that, of the established tracks, only here, Albert Park and Monza have lap records posted before 2018. Monza and Melbourne’s records go back to 2004, the final unrestricted year for the V10s, making Bahrain the only F1 circuit with a lap record set by a V8. Pedro’s lap was actually slower than that set by Michael Schumacher the previous year – but reprofiling Turn Four meant the record was reset. It was his first race for McLaren and his only fastest lap – but it’s also been a talking point for 16 years. He was driving because Alex Wurz – officially the team’s first choice reserve at the time – struggled to squeeze into the tiny cockpit of the MP4-20. 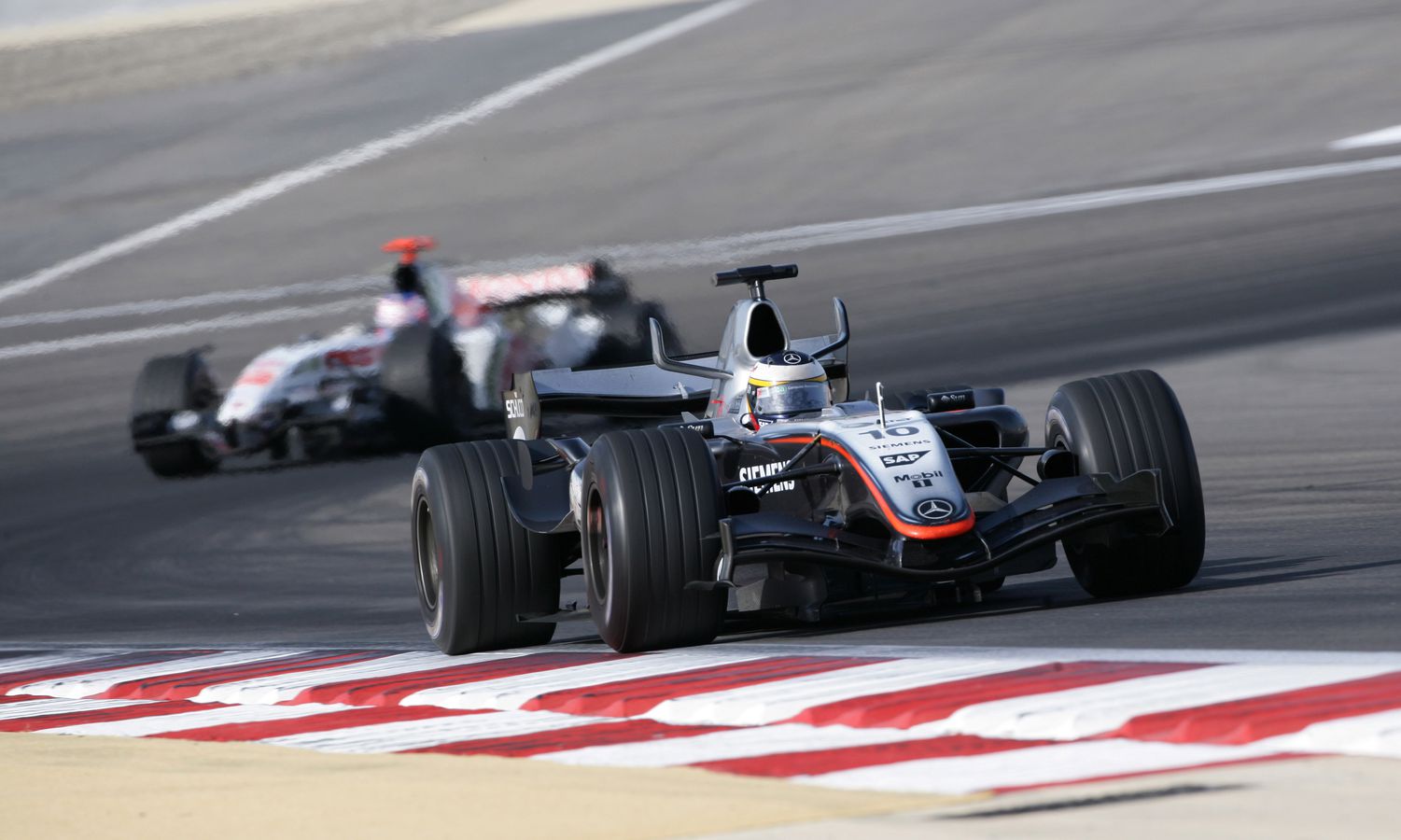 But just why did we call up a reserve driver for the 2005 Bahrain Grand Prix in the first place? Well, we needed someone to stand in for the injured Juan Pablo Montoya. 11 years later, we needed another replacement after Fernando Alonso was benched by the FIA medical team following a massive shunt in Australia. Stoffel Vandoorne stepped in and scored a point for 10th place on his F1 debut.

Bahrain is a difficult place to make a passing move, though Kimi Räikkönen made it look relatively straightforward in 2006. Starting 22nd and last after a suspension failure in qualifying left him without a time in Q1, Kimi dragged his MP4-21 up to third position by the flag, using an unfavoured one-stop strategy to limit the amount of on-track overtaking he needed to do. While a 19-place gain isn’t an F1 record, at the time it was the most anyone had managed since 1993. And, in the reasonably long history of the Bahrain International Circuit, no one else has managed to bring home a trophy starting any lower than 11th. 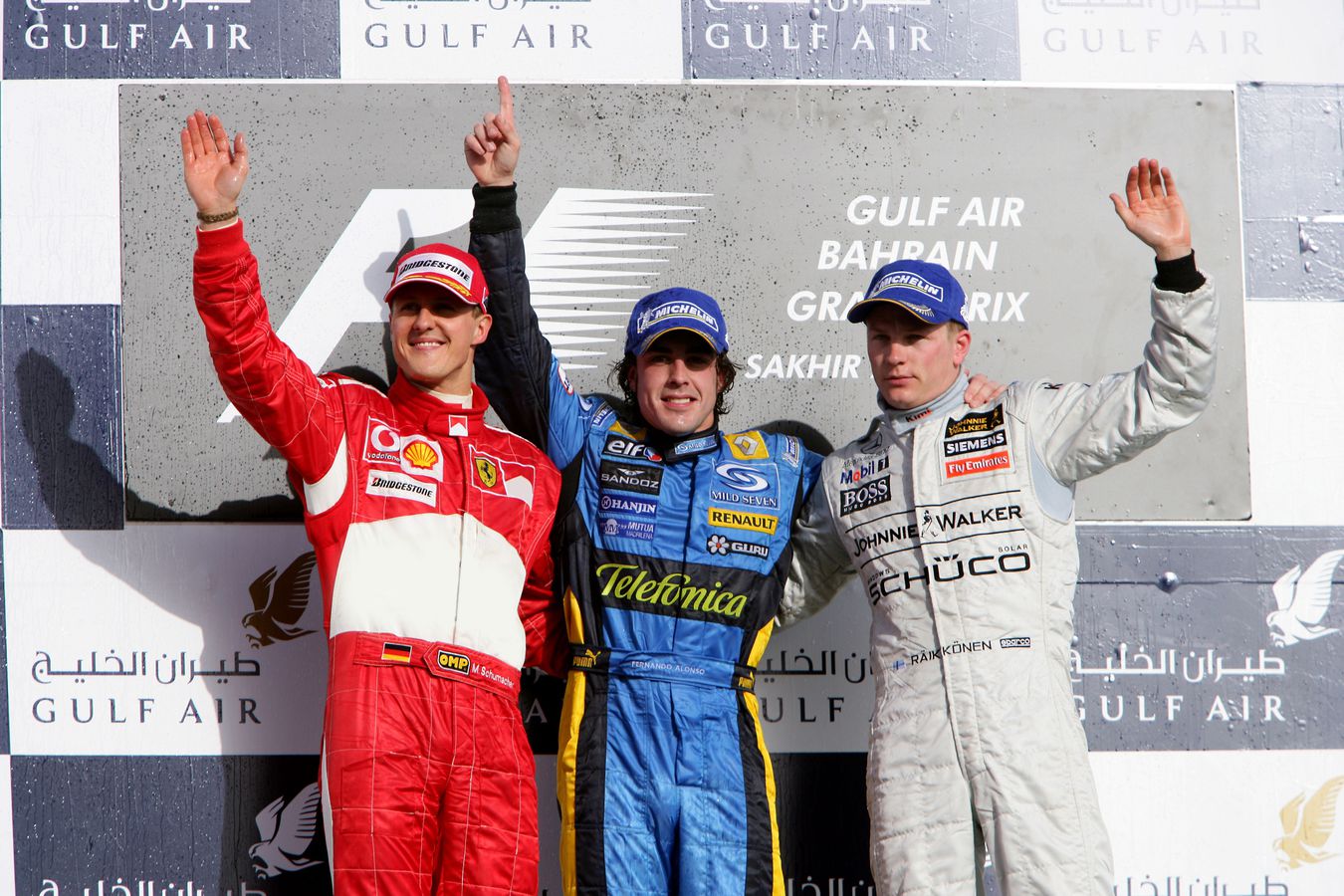 Bahrain hasn’t been the happiest of hunting grounds for McLaren. Over the previous 16 years we’ve not taken a pole position or a victory here, we’ve recorded just two fastest laps (de la Rosa and Heikki Kovalainen in 2008) and only brought home four trophies. Our best result is second place in 2007 with Lewis Hamilton. Lewis also had our best starting position at the race, lining-up in P2. It was his first start from the front row. Does that make the Sakhir circuit our bogey track? Looking at the established tracks on the F1 calendar – those that have hosted a decade or more of F1 racing – the only other venues from which we only have four trophies are the Marina Bay Street Circuit in Singapore and the Yas Marina Circuit in Abu Dhabi; but both of their stats include victories, so the answer is… yes!

250 grands prix isn’t a milestone many drivers get to achieve – just 10 so far – so when Jenson Button hit the mark at the 2014 Bahrain Grand Prix, the team made a bit of a fuss with celebratory T-shirts and a pit board photo outside the garage. When he reached 300 at Sepang we let him have a dartboard and a cake…