Some races are pretty, some are effective… the Azerbaijan Grand Prix was one of the latter

Some races are pretty, some are effective… the Azerbaijan Grand Prix was one of the latter

McLaren’s drivers played the percentages in Baku to make up ground all the way through a long, tough race. With exclusive insight from McLaren F1 Director, Strategy and Sporting Randy Singh, we dissect the Azerbaijan Grand Prix.

After not having a street race for 20 months, F1 had two in two, though it’s difficult to imagine two street layouts less alike than the Circuit de Monaco and the Baku City Circuit. And yet, for all their differences, both indicated a solid one-stop strategy with the timing of the pitstop likely to be the area of most interest with regard to decision-making.

McLaren had an unsatisfying qualifying session on Saturday with a crash for Daniel and a penalty for Lando, and so started the race out-of-position and on the back foot. In recent years, advancement would have been dependent on doing something other than with pace in the car, but that’s sometimes a temptation best ignored. While you couldn’t say anything in a chaotic Azerbaijan Grand Prix went entirely to plan, the eventual outcome of both drivers gaining four places on their starting positions emphasises the value of restraint.

Azerbaijan is generally a one-stop race but by moving a step softer in 2021 onto the softest compounds in the Pirelli range, the strategy options within that range narrowed a little, with the quickest way to the flag judged by the tyre supplier to be a long stint on the Hard tyre, either preceded or followed by a short stint on the Medium compound or a very short stint on the Soft. The other factor to consider was the likelihood of a Safety Car intervention. As with any street track, the chance is very high in Baku, which means having a plan sufficiently flexible to adapt to whatever comes your way…

Lando got boxed-out at the start and dropped three places. While that required a recalibration of expectations, it didn’t dramatically affect the strategy he was planning to use. While George Russell and Antonio Giovinazzi stopped very early, on lap one and two respectively, Lando stayed out until lap seven, pitting for the Hard tyre at the same time as Fernando Alonso, and in doing so starting the cascade. 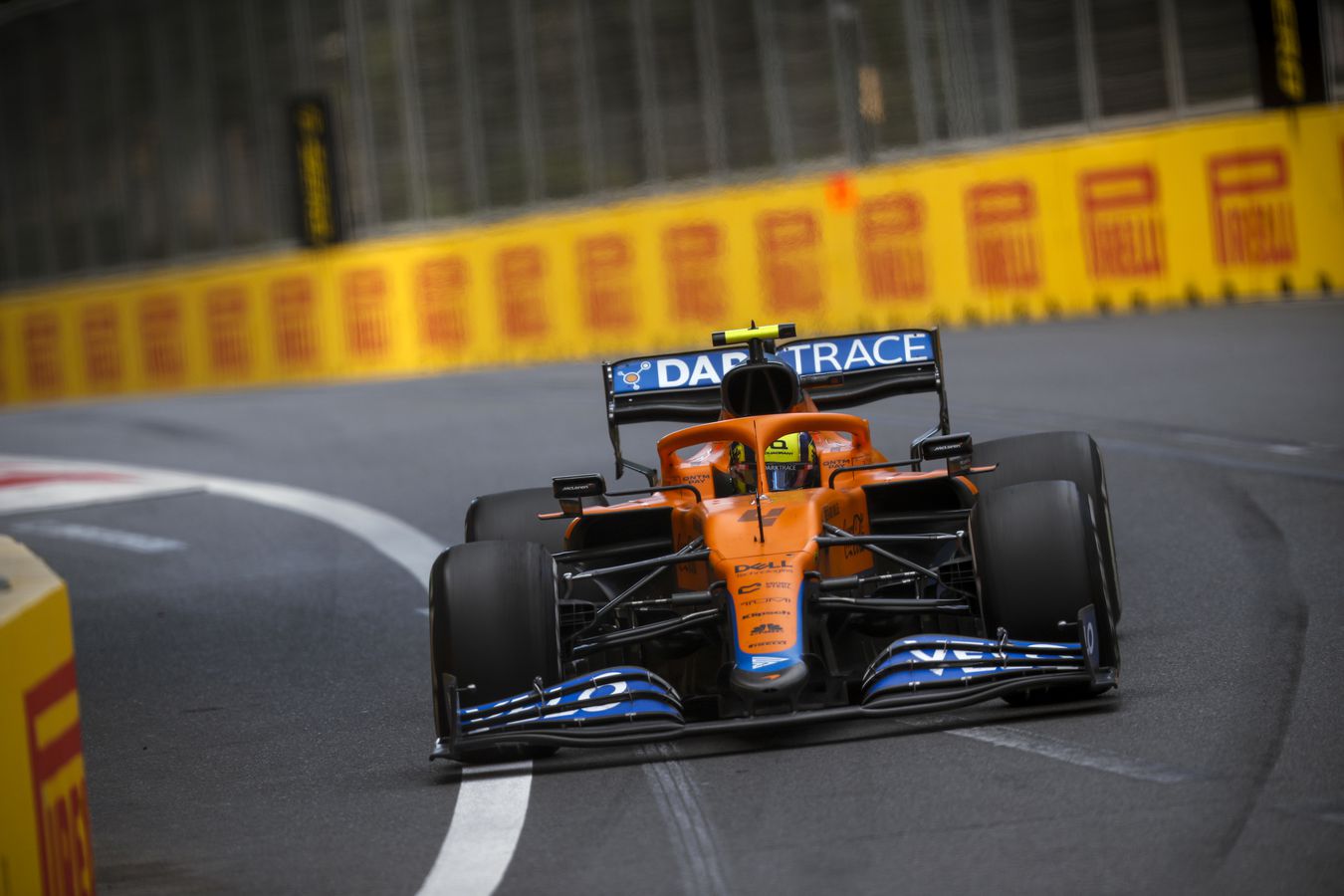 “We followed Fernando in but that wasn’t part of the decision,” says Director, Strategy and Sporting Randy Singh. “In that first stint, we couldn’t get past the cars in front. We knew we’d be pitting at some stage in that part of the race, so decided to go early, trying to undercut cars ahead, particularly [Valtteri] Bottas. That worked very effectively, and we beat to him to the flag, partly through the undercut.”

Another target for Lando was Sebastian Vettel who elected to go long on his Soft tyres – but a combination of good pace from him and Lando’s inability to pass Yuki Tsunoda rapidly took away the slim chance of the undercut. Lando then settled into his stint, looking after the tyres, with a view to having good performance at the end of the race when he would likely either want to attack Tsunoda or defend against an out-of-position Carlos Sainz. When the race was neutralised, those three were running with gaps of around 1.5s, with a potential scrap ahead over the last six laps. Which way it would have gone… we’ll never know.

A little further back on the grid, Daniel had a choice of starting tyre. Between the rearwards ten, all three compounds were in play. Daniel opted for the Soft tyre, as did Sebastian Vettel and Esteban Ocon immediately ahead of him on row six. The decision came down to it offering slightly better start performance than the Medium compound, and better opportunities to take advantage of a Safety Car or VSC if one came along, compared to the Hard. That tyre would have required the car to stay on track for at least the first half of the grand prix to make a one-stop race viable, effectively neutralising the potential of taking advantage of an early race incident. 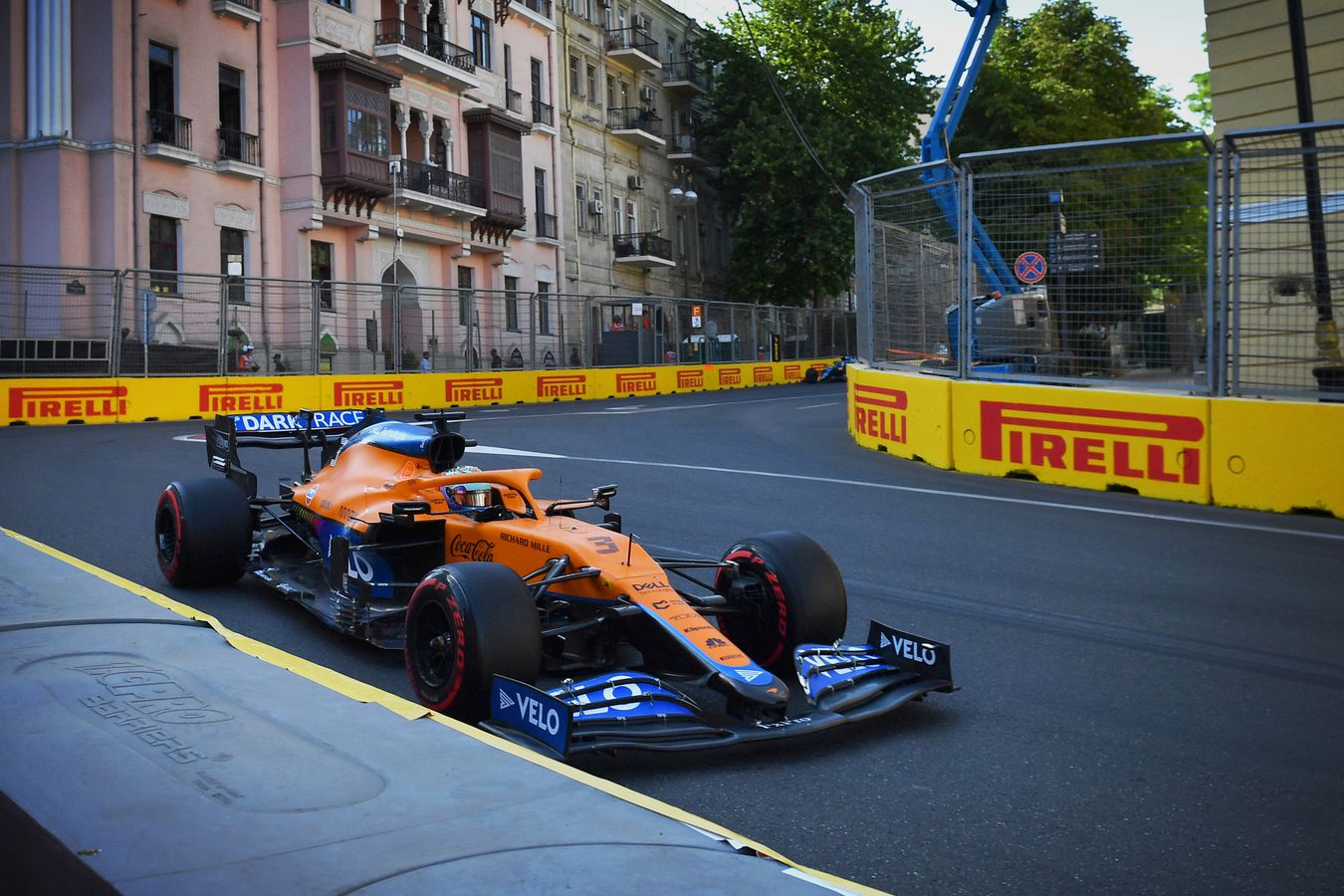 “We didn’t want to commit to a long first stint with the hard tyre because it would mean we couldn’t take advantage of any race circumstances,” says Randy. “We chose to start on the Soft to get a bit of benefit for the start. The launch itself is quite minor in Baku because the run to the first corner is so short – but the Soft retains an advantage for the first couple of laps as well. We knew there would be an early pitstop sequence, so we decided that benefit over the first few laps was preferable to the advantages of the Medium over a slightly longer timeframe.

With the new tyre on the car, Daniel could go longer than the cars on used rubber ahead – but in the end elected to pit in the main cascade on lap 11 to avoid losing time with Charles Leclerc, who was coming up behind having made his stop. “Effectively, it was just a point where people start pitting behind you and you’re going to start losing time,” says Randy. “We knew there wasn't a lot of time we could run before we started to get traffic, and the tyres weren’t going to last for a super-long period either, so we just felt that was the right time.”

Neither car pitted under the Safety Car that was required to clear debris from Lance Stroll’s crash. With the pitlane initially closed, and the train formed, any pitstop would automatically have sent the car to the back of the field. The advantage of a Soft or Medium tyre (neither driver had another Hard available) for a very long stint didn’t compensate for the positions relinquished. Everyone in the top 12 stuck to their aging Hard tyres, though Alonso, out of the points in P13 and falling backwards, had little to lose from the gamble and was the highest-placed car to make the swap. 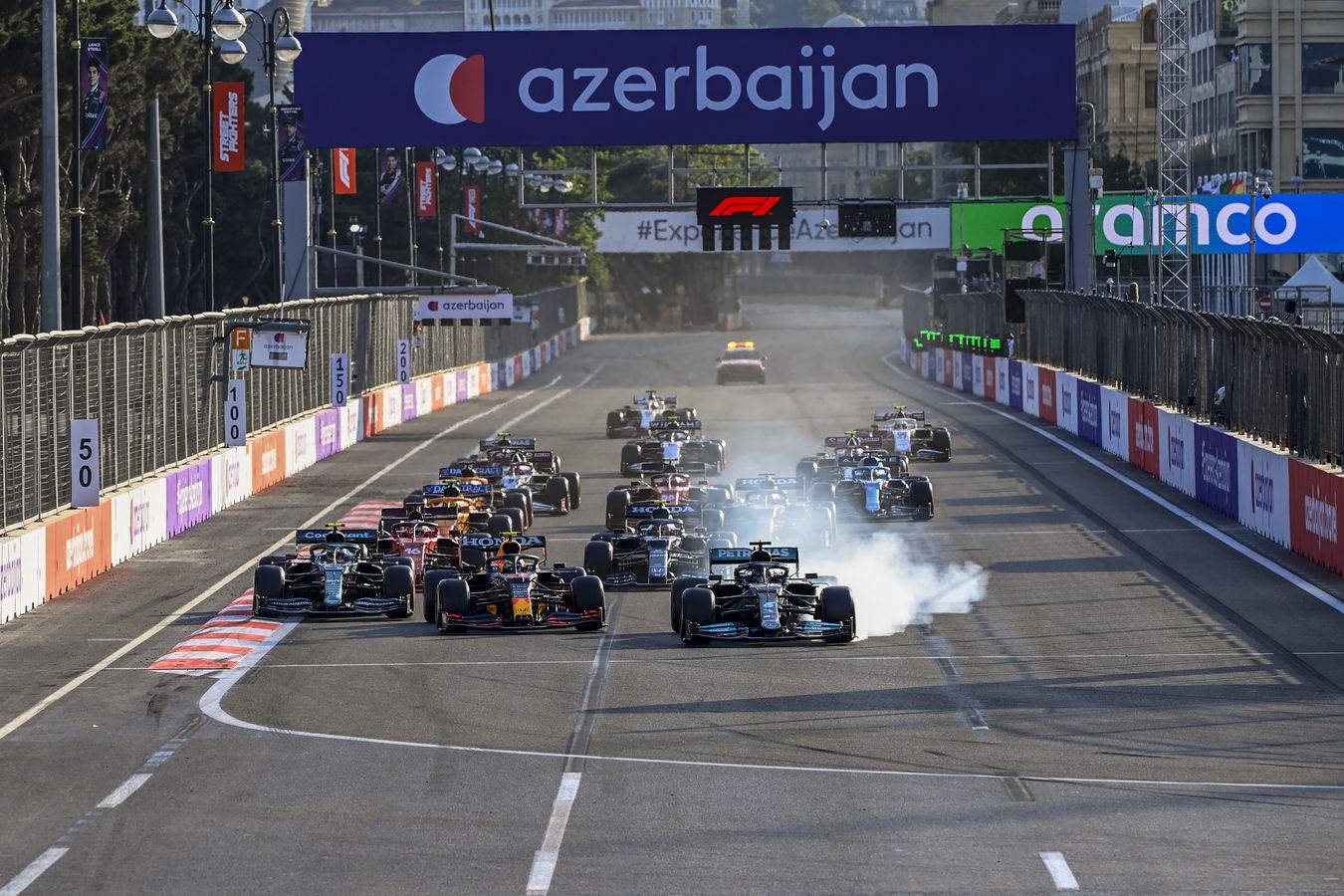 The second Safety Car and subsequent red flag left the field with the novel circumstance of a two-lap sprint race. Strategy at this point was compressed down to choosing the best set of used Soft tyres left in the allocation and wishing the drivers the very best of luck. In a neat piece of symmetry, Lando’s pass on Tsunoda at the restart ensured both cars made four places on their starting positions by the flag. While the team lost third place in the Constructors’ Championship, we also came away with a sense that the weekend had concluded with a good recovery.

The Azerbaijan Grand Prix according to social media