In association with FxPro, and with insight from McLaren F1 Head of Strategy and Sporting Randy Singh, we make sense of the dramatic Italian and Tuscan Grands Prix – revealing why red flags changed the complexion of both races and might have cost us victory.

There are few more violent events in Formula 1 than a red flag. The garage erupts into life: instructions are shouted, crew members grab equipment and scramble to get into the pitlane to cool the car and begin a process of inspection – it’s zero to flat-out in the time it takes to register the blinking red band on the timing monitors. And in the eye of the storm are the strategists.

Until arriving in Italy, F1 hadn’t seen a red flag on Sunday since the 2017 Azerbaijan Grand Prix and then, like London buses, three arrived in quick succession. Each turned a race, none did us any favours and, as we give you the lowdown on our strategy choices during F1’s grand tour of Italy, we explain why…

The tyres at Monza

The tyres at Mugello

The Italian Grand Prix at Monza is the most traditional of races and, in the last decade, it’s also had a very traditional one-stop strategy. Within the bounds of that one-stop, however, lies a great deal of scope. For Carlos and Lando, starting towards the head of the field with Used Soft tyres and a fast car, the strategy decisions become a little more straightforward than they are further back. “It isn’t ever easy – but the car being as competitive as it was at Monza makes the race easier,” says Randy. “Our start tyre was fixed, we were happy with the strategy and we were pretty sure most people would be doing a one-stop,”

What actually happened in Monza

The strategy never got to properly play out at Monza, with stops for both drivers dictated by first a Safety Car and then a red flag. After an excellent start, Carlos and Lando rose to P2 and P3 respectively. The Safety Car for Kevin Magnussen’s stricken Haas on lap 20 came at a reasonable time for a pit-stop but the pitlane closure allowed the field to compress. When it opened, we affected an excellent double shuffle for Carlos and Lando on lap 22.

Coming in from P1 and P3 respectively – after Lewis Hamilton had pitted illegally from the lead, Carlos and Lando held position against the cars that followed them in but lost position to the midfield cars that pitted before the Safety Car, and to Lance Stroll who elected to stay out. This left them running P8 and P9. At the restart they both passed Nicholas Latifi and, when Charles Leclerc went into the barriers and caused a red flag, they stopped in the pitlane P6 and P7. The halt effectively reset the grand prix as a 27-lap sprint race, allowing everyone to take new tyres and, in effect, erase the advantage Carlos and Lando had on the cars ahead of them in the queue.

At the restart, they made their way through the field, but never quite regained their earlier track positions, finishing P2 and P4, despite their best efforts to chase down Pierre Gasly and Stroll respectively.

Carlos celebrates P2 on the podium in Monza 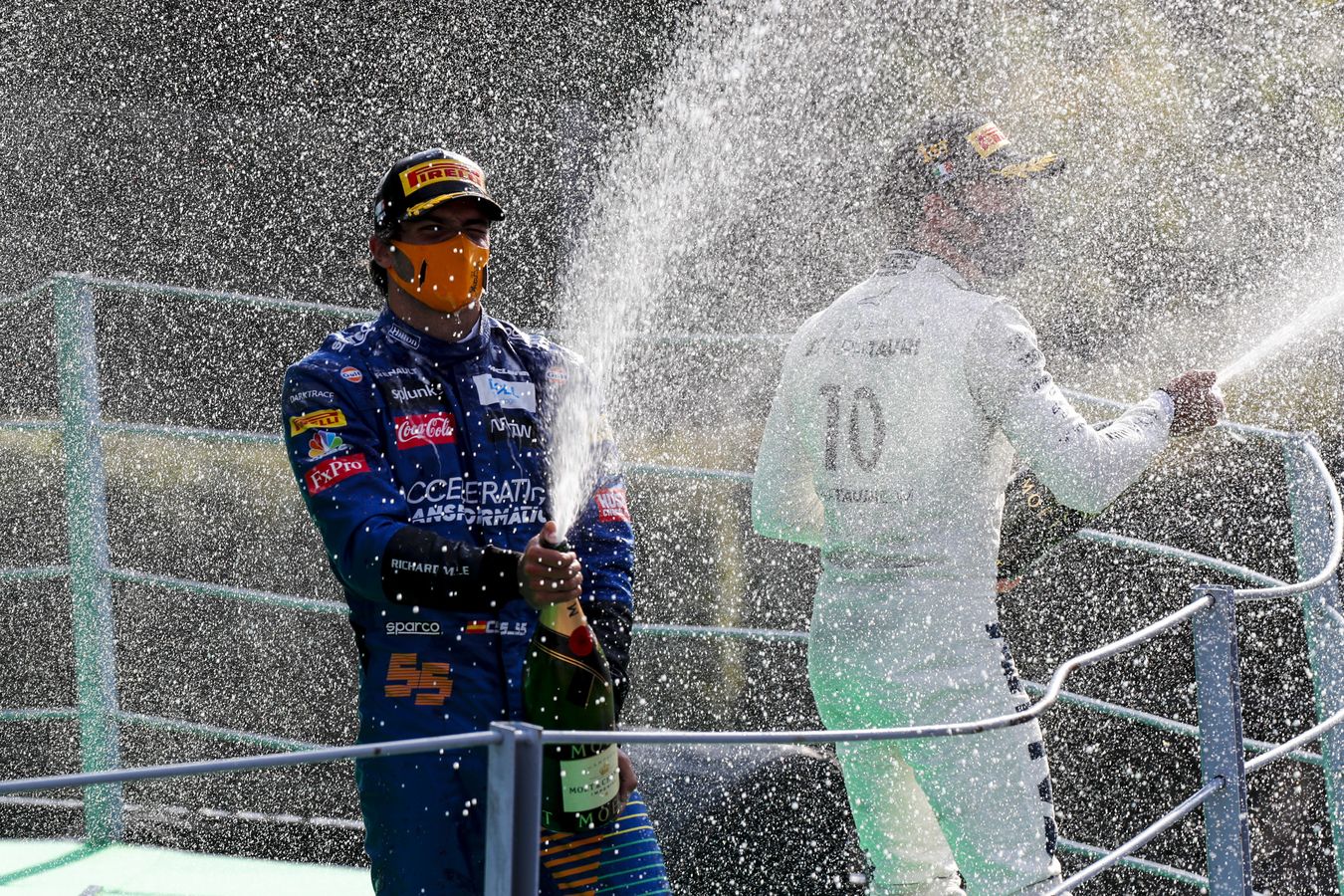 Carlos celebrates P2 on the podium in Monza

Carlos’ race was looking relatively straightforward in the first stint. He’d pulled away from Lando and had built a gap of around five seconds, conferring the luxury of being able to react to whatever the chasing pack did. Lando had a harder job. “Because the field is so competitive, Lando still had a lot of threats,” says Randy. “He was racing at least four cars and, with many cars within his pit window approaching the stops, we had to be looking at the full spectrum of the field. At the time the Safety Car appeared, we were looking for a suitable gap to drop him into and weighing that up against the risk of being undercut.”

The Safety Car and the subsequent red flag dictated strategy for the rest of the race. The only decision left to make was the choice of tyre. At the Safety Car, we fitted new Medium tyres to both cars, with the intention of running to the end of the race. When the red flag allowed everyone a free stop, we elected to keep that used Medium on the car. “The Medium made sense for whatever restart we had, maximising overtaking opportunities early on,” says Randy. “We knew that we had at least one car in front we wanted to pass, so it was the sensible choice on which to go to the end.”

The Tuscan Grand Prix was a September race in northern Italy dominated by Safety Cars and red flags. That aside, it had very little in common with the Italian Grand Prix. After low-drag Monza, everyone piled on the downforce for F1’s first race at Mugello, which reset the competitive order. Carlos started from P9 on Used Soft tyres, Lando started P11 on New Softs. Without the usual bank of historic data, we went into the race open-minded about how it would proceed.

“There is always uncertainly at a new circuit,” says Randy. “So, you have some uncertainty on tyres – which is probably the biggest issue – but also uncertainly regarding the difficulty of overtaking, pit-loss time, the chances of Safety Cars and red flags. Most people went into the race thinking it would be either a one-stop or a two-stop – but remaining quite open to both possibilities. That’s what we did.” Having this flexibility meant we could immediately take advantage of any opportunities that might have arisen – and it’s the same reason why FxPro provides its clients with trading conditions that give them the flexibility to make ultra-fast orders exactly when they need to.

What actually happened at Mugello

After an excellent launch, Carlos had a collision and spin in the first complex of corners, which dropped him back to P15. Lando took advantage of chaos ahead of him to move up to P8 before the Safety Car came out. At the restart, Lando held P8, while Carlos was a passenger in a multi-car pile-up that necessitated F1’s second red flag in eight days. Lando took a Used Soft tyre for the restart, held position and then moved up to P7 on lap 21 when Leclerc pitted.

When the first round of ‘proper’ pit-stops started in earnest, Lando passed Sergio Pérez on track but then was undercut by the Mexican. Lando pitted on lap 29 and took on a set of Medium tyres and, once the stops had played out, he was running in P7, where he remained until Lance Stroll’s crash elevated him to P6 and necessitated another Safety Car period. In common with the rest of the leading pack, Lando pitted on lap 43 from behind the Safety Car and swapped to another set of Used Soft tyres. When the red flag was thrown on lap 45, he switched to another set of Used Softs. He held position at the restart and ran in P6 to the flag.

Lando had free range on tyre choice at the start. He took a set of New Softs to take advantage of the extra grip it was likely to offer in the run down to the first corner. “There wasn’t much strategic disadvantage compared to starting on the Medium and we were keen to have a good start at what was a difficult overtaking circuit, and to gain some positions early on,” says Randy. “In effect, we decided to be aggressive and make places early, rather than taking a conservative wait-and-see approach.”

During the stint after the first red flag, Lando pulled away from the pack following him and could concentrate on cars ahead. His race evolved into a battle with Pérez, in which Sergio had track position but suffered greater tyre degradation. 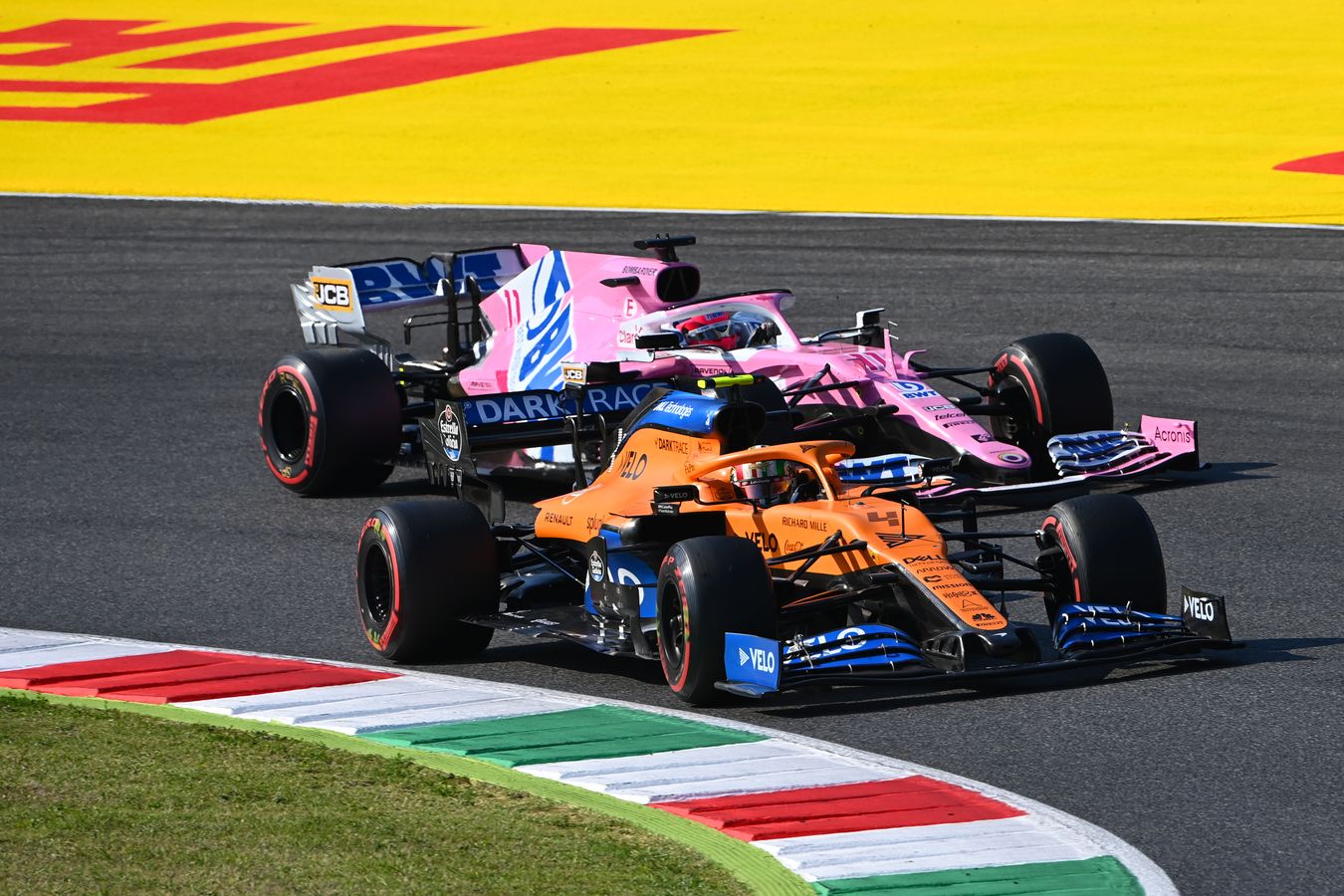 “We had choices before and after Lando passed Pérez,’ says Randy. “Before Lando made the pass, we could have tried to pass him in the pitlane and after the pass we could have chosen to box to prevent an undercut. In this case, we chose to do neither of these and to run longer, which would have helped us in a more normal race. Unfortunately, we had to pit earlier than planned due to the tyres going off quicker than we had all expected, and the later Safety Car and red flag nullified any advantage we had banked.”

Before Stoll’s accident, we were expecting Lando to go to the end on the Medium tyre – but open to the possibility of making another stop if degradation was very high. The Safety Car tipped the race in favour of another stop and Lando, like all the cars in front of him, pitted to take on another set of Used Soft tyres, and then did so again two laps later under the final red flag. In the final short stint, with no likelihood of excessive degradation and no time to build a tyre delta, the race petered out and everyone maintained position.

Strategy is based on data: empirical evidence or, in its absence, the slightly more fuzzy variety of historical precedent. It can forecast Safety Cars and flags – but can’t account for their timing. At Monza, the stoppages almost certainly cost us places; at Mugello, it certainly cost Lando an opportunity to contest a place. Coming away from Italy, the sense is that the flags compromised our strong strategic positions in both races. They were, in effect, unlucky. Luck, however, tends to balance out over the course of a season… though that isn’t something you’ll ever hear in a strategy briefing.

All-access to the chaos-filled race in Mugello

A memorable weekend in Monza under the microscope

What's in the box box box?