The most iconic corner on Mexico’s Hermanos Rodriguez circuit is ironically its most compromised.

The spectacular in-field arena, crammed inside the parkland’s baseball stadium somehow perfectly captures the happy mayhem of the local crowd. But, as a slow, tight Mickey Mouse dog-leg, it’s a pale shadow of the original Peraltada curve, one of F1’s ultimate hair-on-the-chest fast corners. 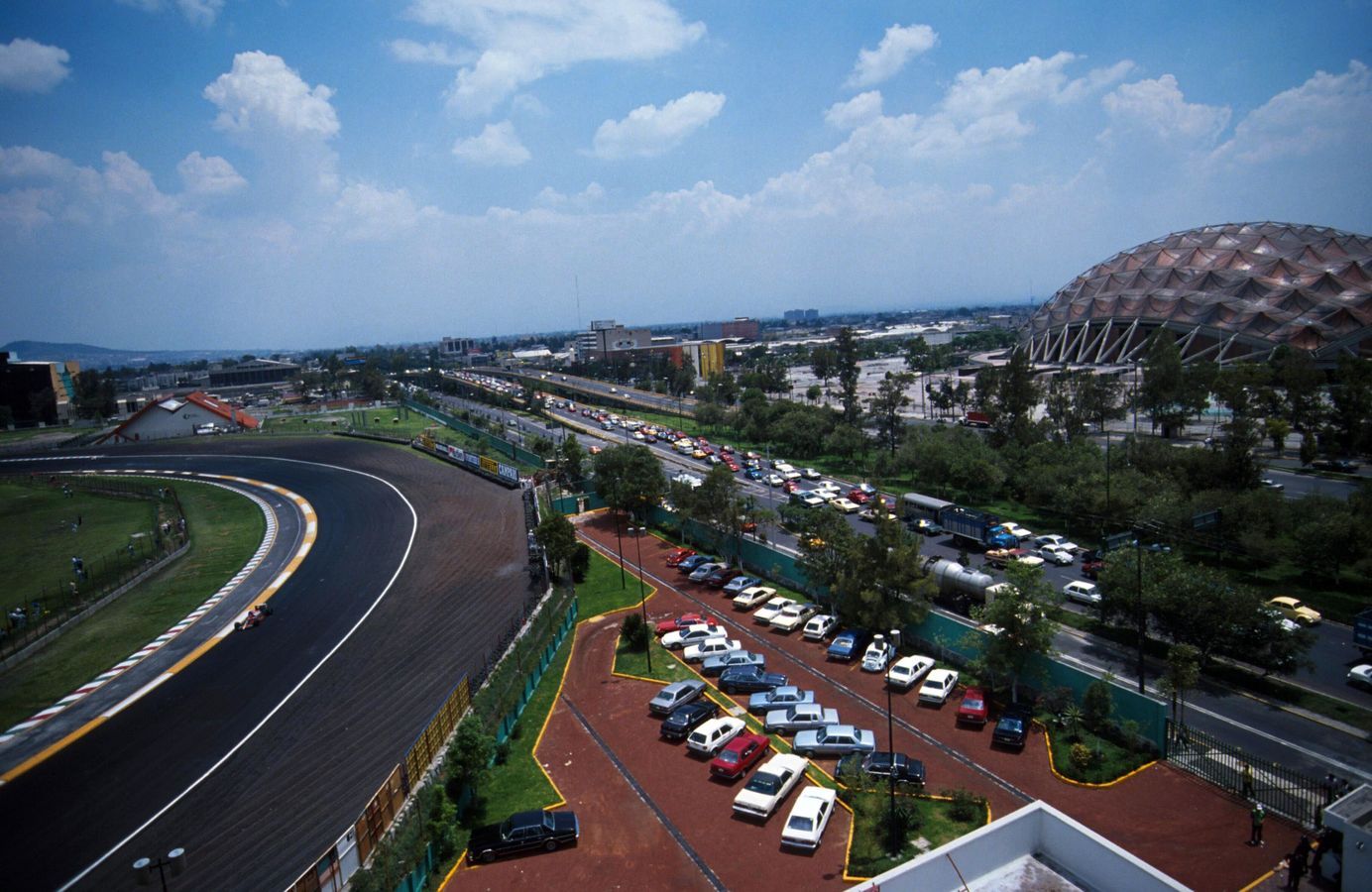 The ‘original’ Peraltada was a huge, high-speed, banked, 180-degree right-hander – helpfully fitted with almost-zero run-off just to test the drivers’ mettle. Like F1’s other famous banked corner, Zandvoort’s Tarzan hairpin, the extreme camber encouraged alternative racing lines, and made the turn the home of the truly brave.

Mexico’s first Formula 1 race was marred by tragedy. In 1962, the Magdalena Mixhuca, as it was originally called, hosted a non-championship event won by Jim Clark. But the event was overshadowed by the death of promising young Mexican driver Ricardo Rodriguez, whose Rob Walker-run Lotus suffered a suspension failure at the entry to the Peraltada. Tragically, Rodriguez was killed instantly when his car hit the barriers.

When the race officially joined the F1 calendar in 1963, it sat at the back-end of the campaign, becoming the end-of-year event from 1964 onwards. For McLaren supporters, the highlight of that first era was the 1969 edition, which was won by Denny Hulme, who took the third of his six victories for McLaren. 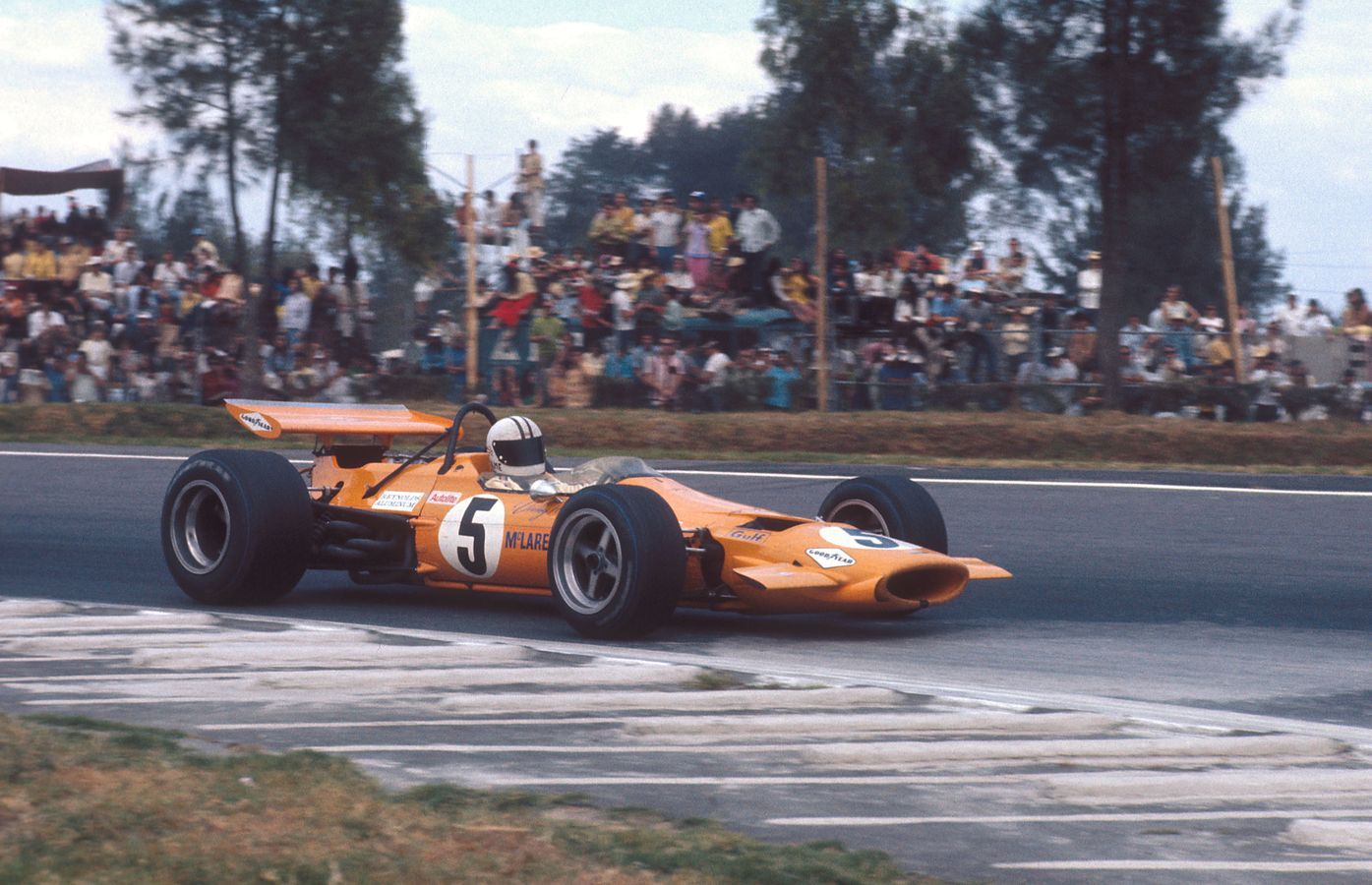 A year later, the event was marred by crowd-control chaos – spectators surged onto the grass run-offs, a stray dog ran onto the track, and bottles were thrown onto the Tarmac. These troubles, allied to the death of Pedro Rodriguez in a sportscar race in the summer of 1971, conspired to see the event drop from the schedule after the 1970 event.

If we’ve learnt anything from the Mexican Grand Prix, it’s that you can’t keep a good event down. Against the odds, the race returned to the calendar more than a decade after it had seemingly disappeared forever. The circuit, now redubbed the Autodromo Hermanos Rodriguez in tribute to the nation’s two beloved racing brothers, returned in mildly modified form. Critically, it still retained the fearsome, banked Peraltada – albeit with a little of the gradient shaved off to make it a bit more manageable for the super-powerful turbo-charged cars of the era.

McLaren featured prominently in Mexico during this time, winning in both 1988 and ’89, but it was the 1990 race for which the event, and its famous corner, is best remembered.

With the bit between his teeth, Ferrari driver Nigel Mansell harried McLaren’s Gerhard Berger into the back straight on the 67th of 69 laps. The Englishman had no right to pull off a pass, but kept his right foot nailed, bucked the bumps and swooped around the Austrian on the outside. It was a ballsy, sensational, audacious move, and earned Mansell runner-up spot behind team-mate Alain Prost, who had started an unspectacular 13th but moved through the field by virtue of some astute tyre management.

“That move was sheer lunacy,” Mansell later recalled. “I think Gerhard was surprised — it’s not a manoeuvre you do; it’s an outrageous manoeuvre, and I think he backed out because he thought there was probably going to be a big accident.

“The element of surprise was key: if you take someone’s wind out of their sails, especially when driving a car at those speeds, and then the car has a wobble as well, then any normal, sane person would back out of it.

“It was probably one of the most daring overtaking manoeuvres in F1 history.”

It’s hard to disagree with Our Nige.

Ayrton was thankfully unhurt in the accident 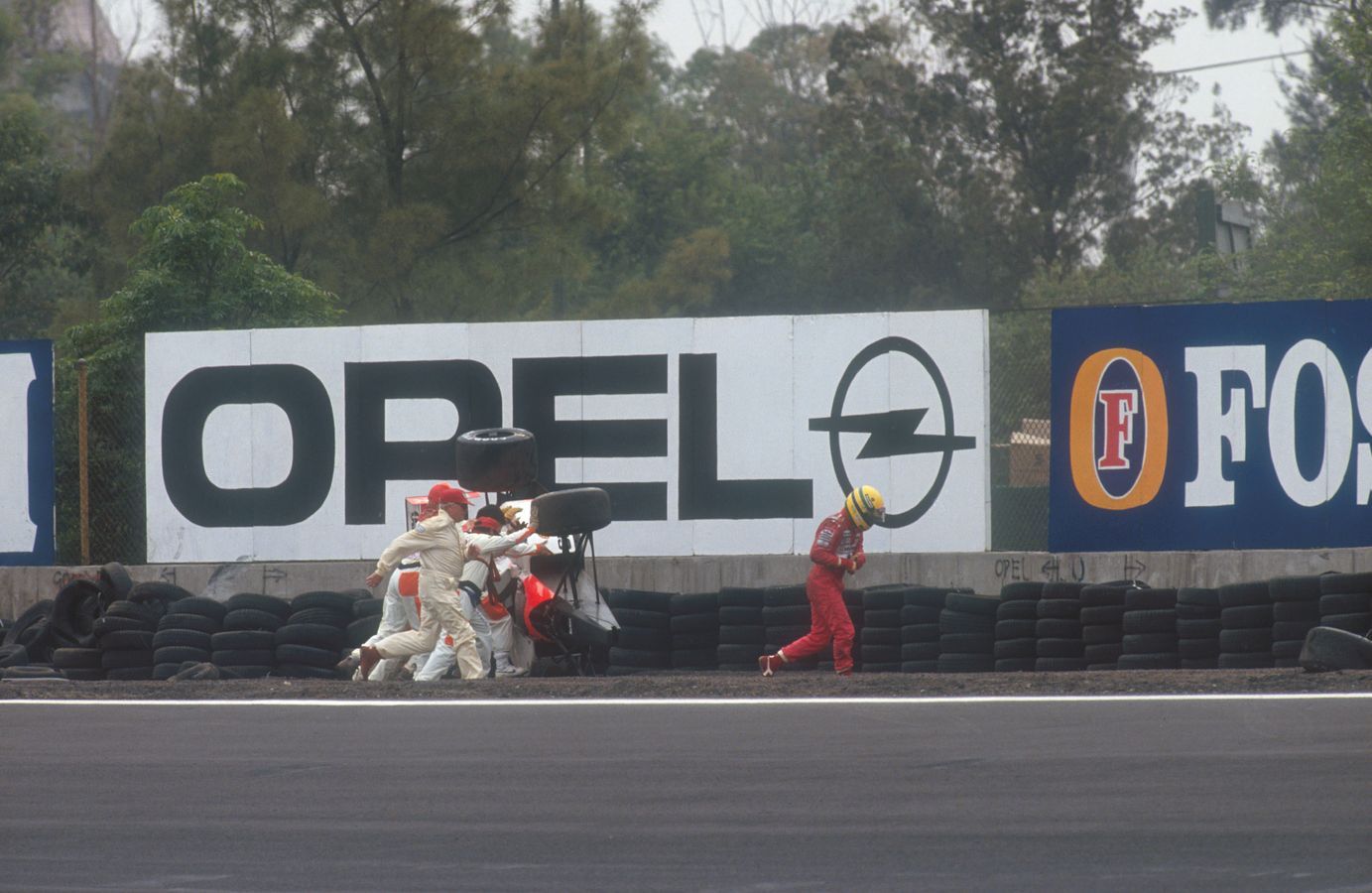 Ayrton was thankfully unhurt in the accident

A year later, Ayrton Senna, tried a little too hard to stay within reach of the dominant Williams-Renaults, tackling Peraltada during free practice faster than he ever had before. Like Mansell, he too hit the bumps, but, on the ragged edge, he couldn’t hold on. The car bottomed-out, wobbled and lurched off-line, careering through the gravel before hitting a tyre-wall, which caused it to lazily belly-flop onto its back.

“He was taken to the medical centre, and I could hear him screaming with pain,” McLaren boss Ron Dennis remembers. “Then [FIA medical delegate] Sid Watkins came out with a smile on his face. I said, ‘How is he?’ and Sid said, ‘He’s fine. He’s not hurt, he’s just a little shaken up.’ I said I’d heard him scream, and Sid said Ayrton had a big stone stuffed in his ear, where the gravel had gone right up his helmet and into his ear!”

When the race again dropped off the calendar at the end of 1992, few expected it to make another comeback – but that was to doubt the tenacity and enthusiasm of the Mexicans. Allied to the success of local countrymen Sergio Perez and Esteban Gutierrez, the race made another unlikely comeback.

This time, however, the notorious Peraltada didn’t make the cut – along with much of the rather run-down circuit, which was extensively modernised, reprofiled and rebuilt by track guru Hermann Tilke. With a baseball stadium now constructed over the banked corner, knocking down the huge grandstands to resurrect the original configuration made little sense, so race organisers did the opposite, threading the corner through the stadium grounds.

The fans invade the track for the podium finish 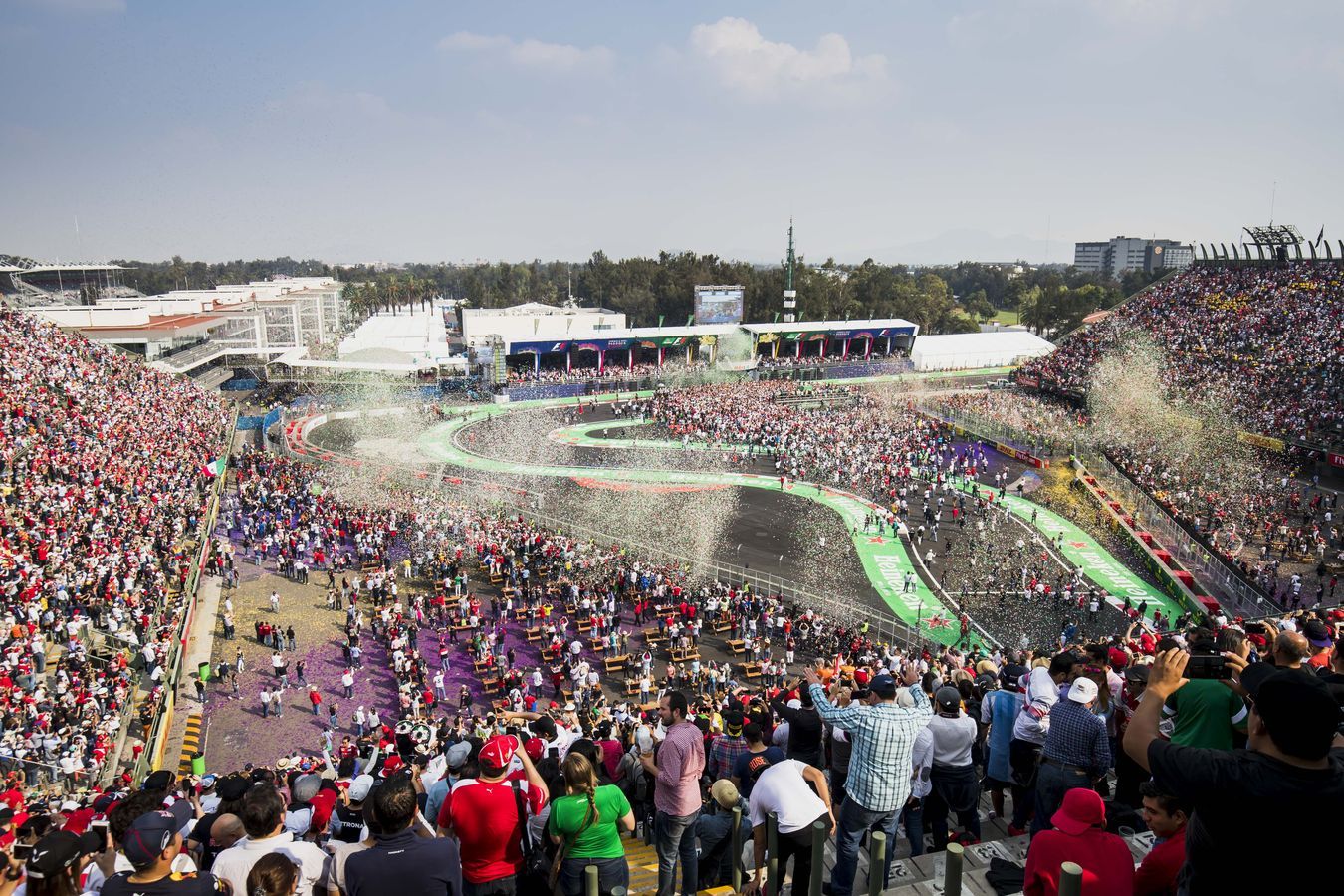 The fans invade the track for the podium finish

The result meant the old, fast turn was lost forever, but in its wake came a new opportunity: Formula 1’s first-ever in-field stadium complex. Capable of holding more than 40,000 fans, the new series of corners became a massive ampitheatre, full of passionate supporters able to get unbelievably close to the cars and drivers.

To cap it all, the race’s podium ceremony also takes place within the arena, meaning that these grandstand fans get the perfect culmination to one of the best-loved, most unique and passionate races on the Formula 1 calendar.