Lewis Hamilton came close to winning the World Championship in his rookie year in 2007, and the following season he was determined to make amends. However, he found himself up against stiff competition from not just one team but two, with World Champion Kimi Raikkonen and his Ferrari team mate Felipe Massa both winning races, and Robert Kubica also proving a surprise contender for BMW Sauber.

Hamilton started the season with victory in Australia, and added another super win at a wet Monaco. However, a run of misfortune meant that he went to his home race behind all three of his main rivals at the mid-point of the championship. A poor performance in France a fortnight earlier meant a good result on home ground was essential.

From the start of the weekend, he was outpaced in the dry by his McLaren team-mate Hekki Kovalainen, who really found the Silverstone groove in his MP4-23. In qualifying, the smiling Finn was mighty, setting pole position ahead of Mark Webber and Kimi Raikkonen.

Lewis, by contrast, wasn’t happy with the balance of his car, and could only line up a somewhat subdued fourth. The race was to later prove that he had set his qualifying time with two laps’ more fuel, but that didn’t come close to accounting for the difference. Privately, Lewis admitted, if the race was dry, he wouldn’t be in the fight for victory.

But Hamilton’s fortunes changed when rain fell throughout Sunday morning, and by the race start, the track was still soaking. From fourth, he made a storming start and vaulted to second, even having a look down the inside of Kovalainen as they swept into the first turn.

The pair actually touched; and when he ran out to the damp kerb, Heikki briefly got sideways. He held it all together, but if he had lost control, Hamilton would have had nowhere to go, and the day might not have been such a joyous one for McLaren.

Initially concerned that he’d broken his wing, Lewis wasn’t about to sit back and wait for his chance. For four and a half laps he pressured Heikki, until finally getting past at Stowe.

Heikki then slipped back from Lewis, and lost second place to Raikkonen on lap 10. The quickest man on the track at this stage, Kimi then began to reel Hamilton in.

Lewis suddenly realised that the Ferrari was getting too close for comfort, and he responded around laps 15 and 16, before the gap shrank again, to the point when it seemed that Kimi would try to find a way by. In fact, like Heikki before him, Lewis was in tyre trouble, so a pit-stop couldn’t come soon enough. 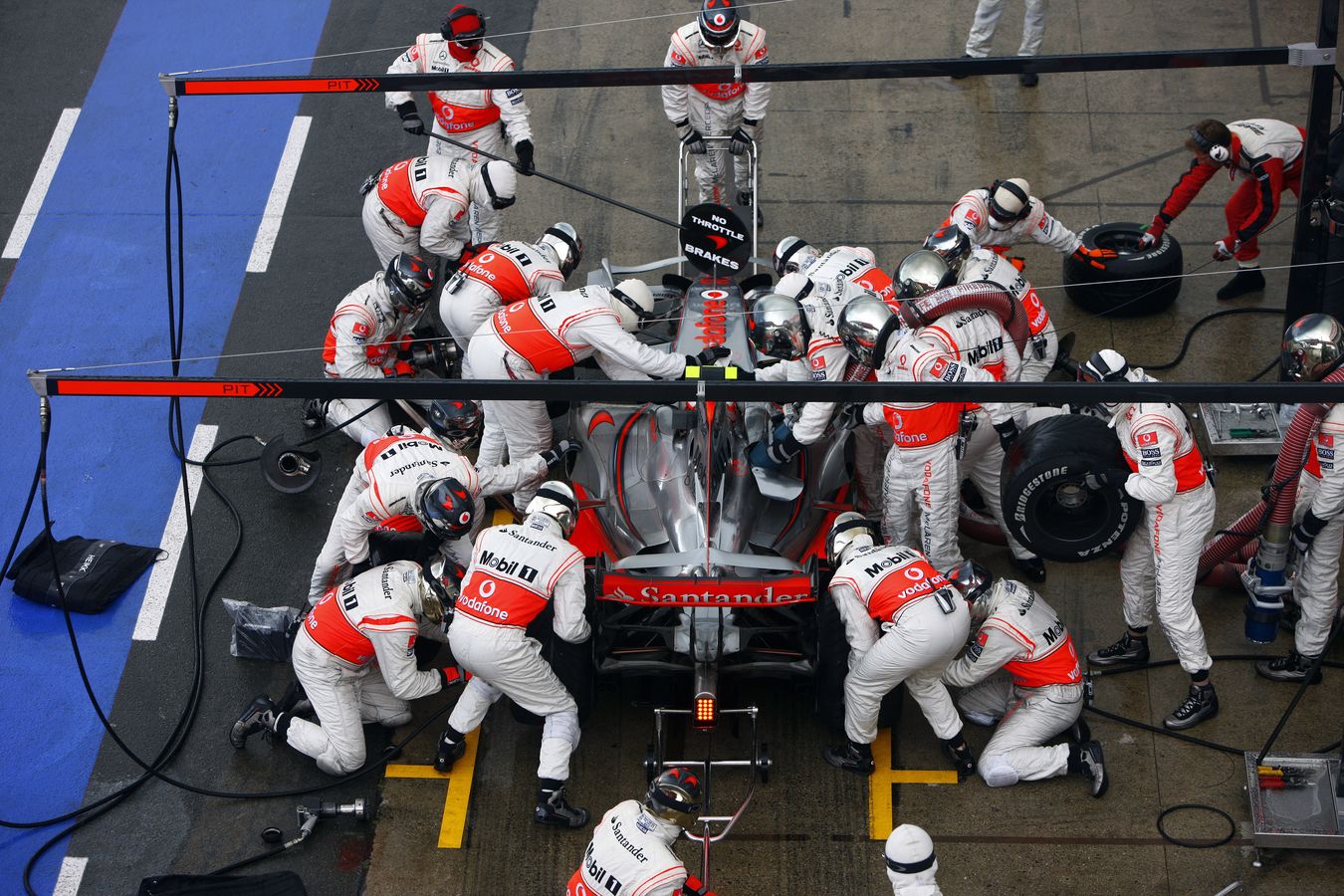 Then on lap 21 the leaders came into the pits together, and Lewis managed to squeeze out still in front. But while they were on identical fuel strategies, the two teams made very different calls on tyres. Lewis took a fresh set of intermediates, while Ferrari left Kimi on a set that had already done 21 laps, or more than a third of the race distance.

His team must have known within half a lap that it was the wrong call. Instead of coming round next time still on Hamilton’s tail, Kimi had dropped back. Over the next few laps, it was as if they were driving in different formulae – in nine laps, Kimi fell more than 50s behind, before he stopped again for fresher tyres.

Hamilton’s main rival was now out of the picture, and having survived the strongest possible pressure immediately before the stops, he now had to focus on Nick Heidfeld, who had taken new Inters a lap after Lewis. The gap to the BMW Sauber man stayed within the 23 - 27s range for the next few laps as Hamilton consolidated his position.

Hamilton’s serene progress was very nearly derailed when heavy rain arrived on laps 35 - 36. This gave Lewis and the team a serious headache, because it happened just before his second stop was due. Others went to extremes, but McLaren gave Lewis another set of inters and fuel to go to the end. It was a massively difficult call.

Significantly slower than the guys on extremes, Hamilton was still miles quicker than anyone else on inters. It was at this stage of the race that he secured his win, if nothing else simply by staying out of trouble, apart from one grassy trip at Abbey on lap 36, before conditions began to favour his tyres once more.

It says a lot that his advantage over Heidfeld grew in the last third of the race, at a point when he was clearly pacing himself, at least by his standards.

“I couldn’t see much, because my visor was a big problem,” said Lewis. “I was just trying to stay calm with no mistakes, and that’s why I kept building and building the gap.” 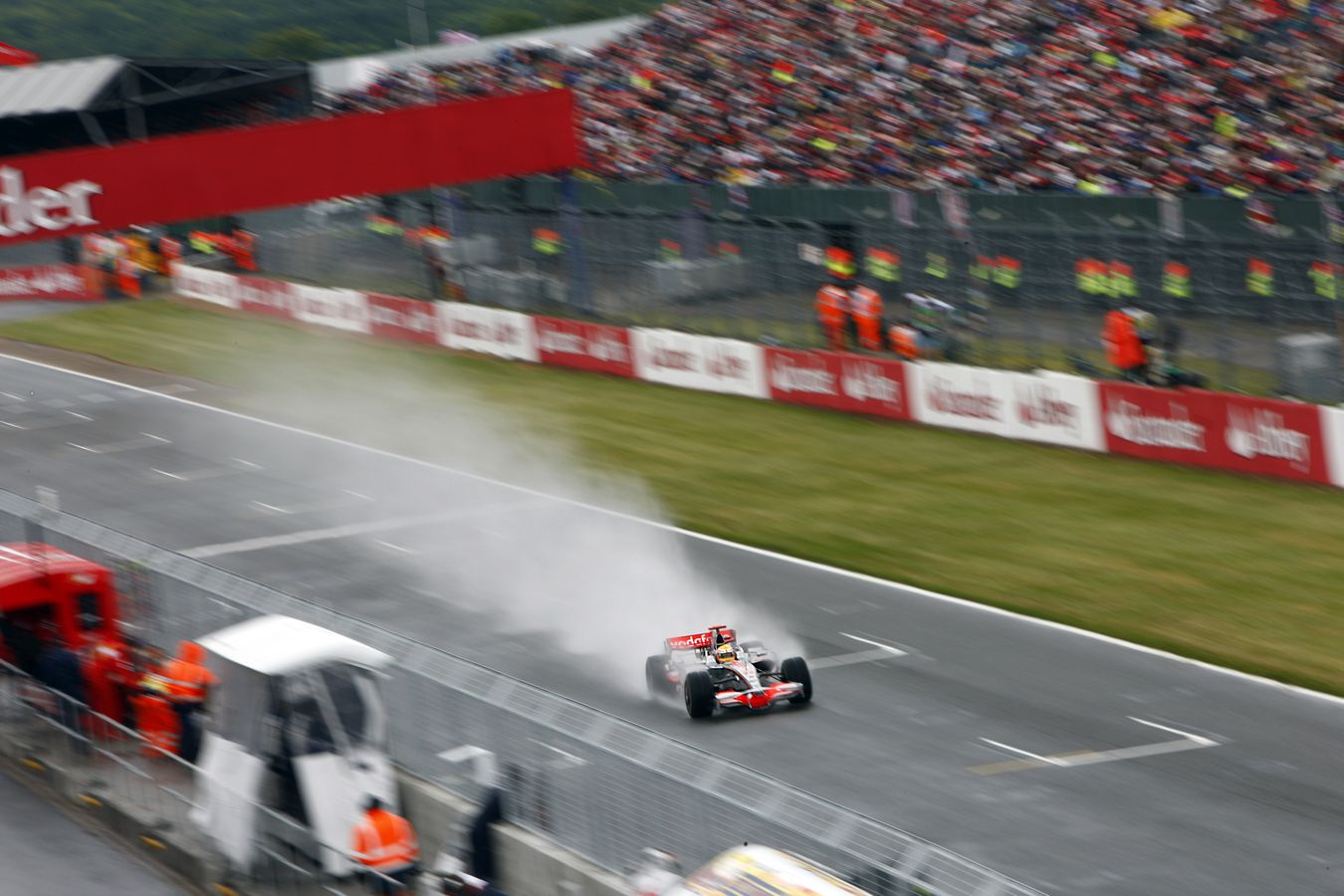 He not only finished a barely credible 68 seconds ahead of Heidfeld, he also lapped everyone up to third place. Both of those statistics were extremely unusual in the modern era, when the cars are so evenly matched and Safety Car periods often serve to close up the field.

It was an incredible performance, one that – after Fuji ’07 and Monaco ’08 – confirmed that Hamilton was one of the all-time wet-weather specialists.