The Wall Of Champions

The Wall Of Champions

For many years, the banner situated at the exit of Turn 14 on Montreal’s Circuit Gilles Villeneuve cheerily proclaimed ‘Bienvenue au Quebec’ – welcome to Quebec.

It was a somewhat optimistic slogan to plaster on an imposing concrete wall that would later earn the nickname, ‘the Wall Of Champions’. It got its name from the apparent ease with which it could attract the great and the good of the Formula 1 field into its unyielding clutches.

The Wall Of Champions neatly encapsulates all that is fun and unique about the Canadian Grand Prix, an early-summer jaunt that invariably results in drama, action and surprise.

It’s a fast corner on a fast racetrack, one that requires a mix of bravery and precision to pull off properly, and which leaves zero margin for error. That’s what makes the race in Canada so compelling – like Monaco, there’s always something race-changing and unusual about to happen.

Like Monaco, the Montreal is also a circuit of extremes. But whereas Monaco is a low-speed circuit with a high-grip surface; contrastingly, Canada is a high-speed track with decidedly low-grip Tarmac. And that combination invites mistakes: cars are trimmed down to minimum downforce levels, forced to yump kerbs to set decent lap-times, and always ready to lurch into oversteer as fading rear tyres scrabble for grip on the road surface.

And it’s that trio of factors that makes Turn 14’s Wall Of Champions so alluring, intense and unforgiving.

In fact, it’s the corner before – the right-hander at Turn 13 that begins the right-left chicane – that usually defines whether a driver will hit that wall or not.

Hit the T13 apex kerb too hard and the car will jump into the air and land heavily. You’ll struggle for front-end grip (not much of that around when the car’s a foot in the air), and invariably understeer into the wall nose first. Such can be the severity of such accidents that you can bury the car quite deep into the wall, because there’s no room to scrub off excess momentum.

Alternatively, nail the first part of the corner, and then hit trouble at the apex of Turn 14 and you can all too easily lose the rear-end, which results in the back washing out, clouting the barriers with the rear tyres.

Get it completely wrong and you could even end up pirouetting over the kerbs and going in backwards.

After 50 years of the Canadian Grand Prix, let’s take a moment to look back at some of the corner’s most famous victims:

The world champion-elect came to an ignominious end in his home race, crashing out on lap two after losing the rear-end under turn-in and slamming backwards into the wall.

The year the Wall Of Champions earned its nickname: lap 14, Damon runs wide and biffs the right-rear suspension on his Jordan; lap 29, Michael Schumacher overcooks it, performs a neat four-wheel drift and hammers into the wall, on the walk back to the pits, he is asked by an over-zealous pit-lane reporter what happened. Michael walks along in stony silence, his mouth pursed in acute displeasure before he icily mutters, “Have you a bit of respect for humans?” Lap 34, it’s Jacques again, this time clumsily straight-lining the kerbs and ending up nose-first in the barriers.

He may have sensationally won the race on the last lap in 2011, but in 2005 he was rather less lucky. Jenson hooked a wheel over the apex kerbs at Turn 13, which booted the car into the air and left him with nothing to do except clatter into the Turn 14 barriers on lap 47. 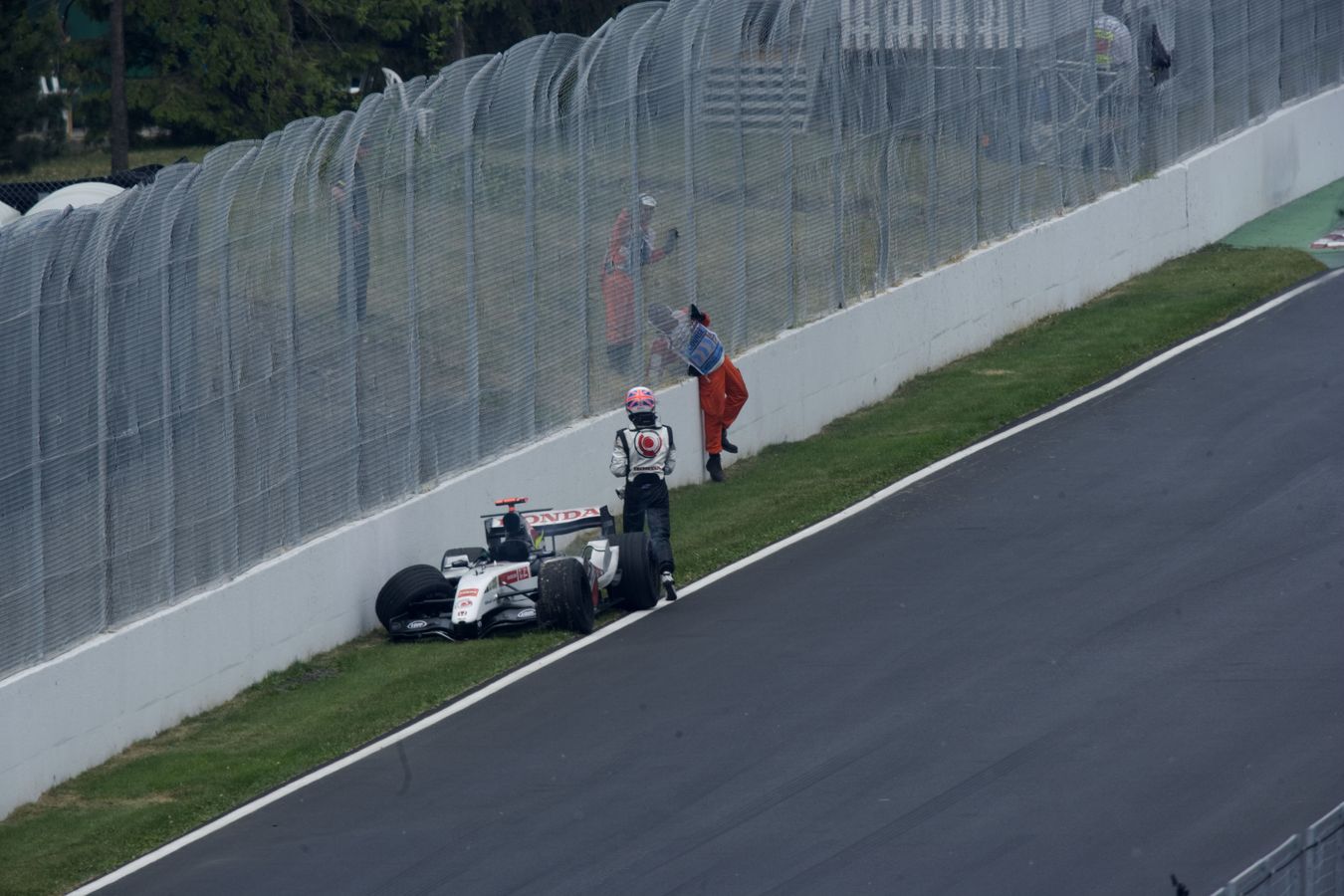 Tom Clarkson investigates what actually happened in the 1988 Monaco GP

Celebrate the legacy of a truly awe-inspiring season