This year we are celebrating the 80th anniversary of the birth of Bruce McLaren, as well as the release of the wonderful new documentary about out founder. As such there will be a special focus on the venues that F1 is visiting in 2017 that would be familiar to the legendary New Zealander – Monaco, Silverstone, Spa, Monza and Mexico City, all of which still feature on the calendar.

Silverstone always had special significance for Bruce, because from 1958 England was his home, and also of course the base of the Cooper team he drove for initially, and subsequently the organisation he founded. He was in turn popular with British spectators, who were not short of home-grown stars, but were always ready to adopt a visitor from “the colonies” as one of their own.

Despite enjoying a long career at the top level, Bruce competed in only five British Grands Prix at Silverstone – in 1960, 1963, 1965, 1967 and 1969. That’s because the nation’s round of the World Championship was shared first with Aintree, and then, after 1964, with Brands Hatch.

However, in those days non-championship F1 races were an established feature of the calendar. Bruce was a regular competitor in the International Trophy at Silverstone, for many years a big event in its own right.

Early in his career he also appeared at the windswept Northants venue in many other categories, so it was a place he knew well.

His first visit came shortly after he left New Zealand for England in early 1958. That April, he made his European racing debut in an F2 Cooper at Aintree, where the biggest surprise was the easy availability of alcohol in the paddock bar – something that wasn’t allowed back home! His next planned outing was at Silverstone, and the day after a disappointing Aintree outing he received some good news.

“That morning a letter from the BRDC arrived made me feel much happier,” he wrote in 'From the Cockpit'. “My entry had been accepted for the International Daily Express meeting at Silverstone on May 3rd, providing I performed to the satisfaction of the observers in practice. Even better, I was to get £75 for my services.”

Bruce had used an older Cooper at Aintree, and now he had to help finish building his own new T45 chassis at the Surbiton works, and pick up an FPF engine from Climax in Coventry.

“We finished the Cooper a nine o’clock on Thursday night and the following morning were at Silverstone getting ready for the practice. The engine was still tight and at times a little disappointing. I ran the car up and down the club straight, to loosen things up, fearing that I would be branded as one of those obnoxious people who keep trying to break the lap record around the paddock.”

In those days the International Trophy was actually a combined F1/F2 affair, so Bruce was on the same grid as Peter Collins, Stirling Moss, his Cooper mentor Jack Brabham and the other stars of the day. All that really mattered was how he fared against the others in the F2 class. 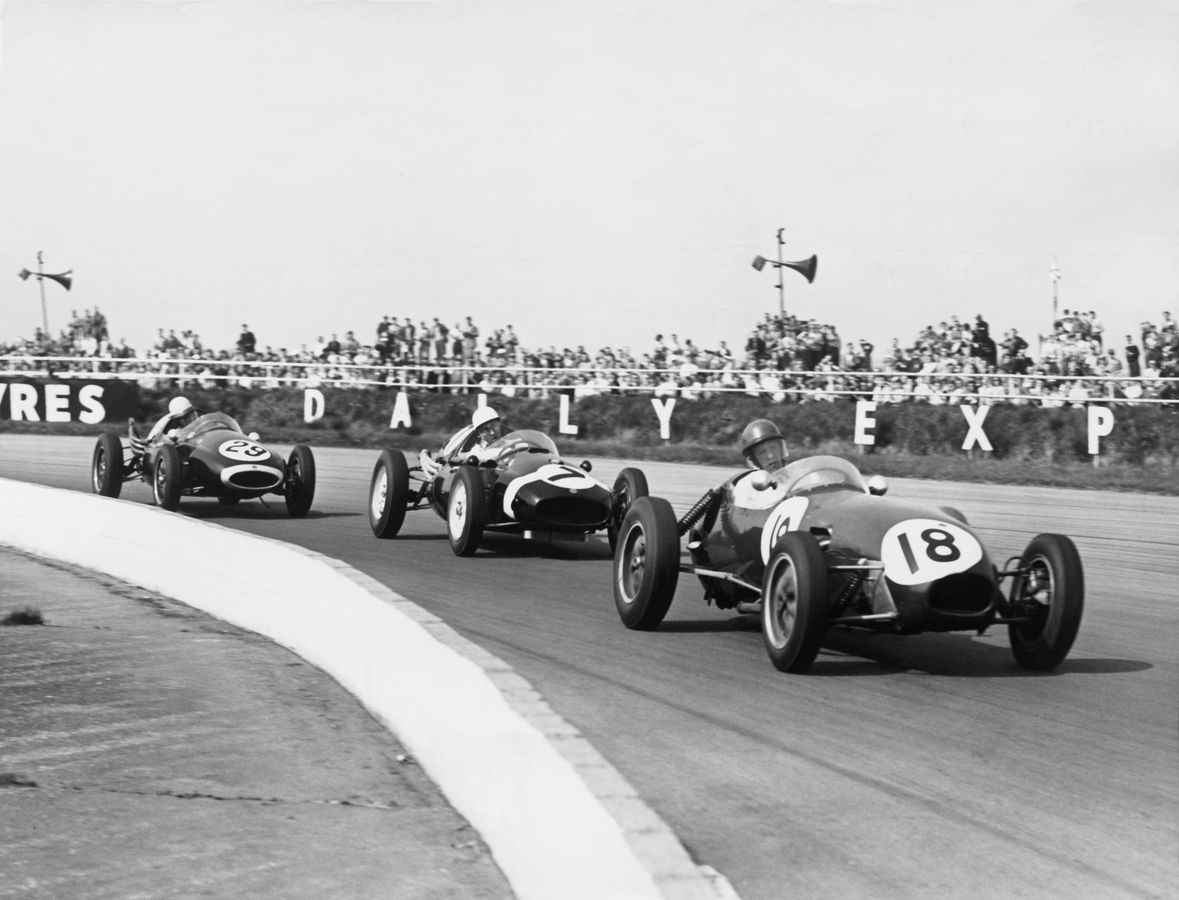 “After a good start in the race I had a terrific dice with Jim Russell, Ivor Bueb, and Ian Burgess. I had no idea I was third until the race finished. This Cooper was a great improvement on the car I had driven at Aintree and I was very pleased. The circuit was impressively fast and called for concentration, but I was proud of my best lap of 99.4mph, not far short of the ton.”

The following weekend Bruce returned to Silverstone to gain more experience by running in a minor club race, which he duly won, much to the frustration of rivals who viewed the presence of a “professional” driver as bad form! One thing was already clear to Bruce – Silverstone was a place he liked.

He was back for the International Trophy in May 1959, again running in the F2 class. This time things didn’t go too well, as he recalled: “A tooth chipped off the crown-wheel, the exhaust pipe fell off, but although I drifted back to the tail of the field, I managed to finish.”

By now Bruce had earned a place alongside Brabham in the works Cooper F1 team, and his British GP debut at Aintree in July was to be one of his best – he finished third behind his team mate (who would win the title that year) and Moss.

His next Silverstone appearance came in the 1960 International Trophy. His new “lowline” Cooper T53 wasn’t ready until the night before the race, and soon after the start he hit problems. Eventually he called into the pits, where a loose bolt was discovered in the throttle mechanism – he’d had a lucky escape, as it might have stuck open. Things went much better in his first British GP outing at the venue a couple of months later, when he started third, led briefly, and finished fourth.

Unusually there were no proper F1 races at all at Silverstone in 1961, when the new 1.5-litre engines were introduced – but there were two big events for the so-called “Intercontinental Formula,” or old Grand Prix cars with the otherwise-now-obsolete 2.5-litre engines.

Alas, Bruce crashed out early at Woodcote in May’s wet International Trophy, while battling with Moss and Brabham: “The car spun wildly, going backwards at high speed, then as I braked the front swung round and I was pointing in the right direction. I nearly had it under control, but the tail was on the grass and this was my undoing. It came round and I was backwards again, still doing 30mph, and I sailed into the earth bank, bending the tail.”

He thus took it more cautiously when it rained again at the British Empire Trophy in July, and he finished fourth behind Moss, John Surtees and Graham Hill. Rain played a role again in a saloon car race at Silverstone later that year when both he and works Jaguar team mate Roy Salvadori ended up parked against the bank at Club. Team boss Lofty England was not impressed.

Bruce was back at Silverstone in 1962 for the International Trophy, starting seventh and finishing fifth. He also had a solid outing in the British GP (held at Aintree for a second consecutive year), earning third behind Jim Clark and Surtees.

Clark was emerging as the star of the era with Team Lotus, and it was certainly no disgrace when Bruce finished runner-up to the Scot in the 1963 International Trophy. He then ran fourth in the early stages of the British GP at the same venue, only to retire with early engine problems and a cloud of smoke billowing from his Climax V8.

By now Aintree had outstayed its welcome, and in 1964 the RAC found a new home for the British GP at Brands Hatch – a circuit that soon became one of Formula 1’s most iconic and best-loved venues. An early gearbox failure put Bruce out of the race, while he’d also been an early retirement at the International Trophy earlier in the season. However, he did score a big sportscar win at Silverstone in the Zerex Special – the car he’d purchased from Roger Penske, and which was to form the basis of the first McLaren.

Meanwhile the Cooper team had lost momentum, and Bruce was already making plans to become a Grand Prix entrant in his own right. His last two F1 Silverstone outings with his old team in 1965 were disappointing – sixth at the International Trophy, and a low-key 10th in the Grand Prix. He was supposed to give the new Mark 1 McLaren sportscar its race debut at the Martini Trophy in July, but a fuel leak and fire in practice left him with burns, so his old Kiwi pal Chris Amon took over driving chores – he went on to win the race.

Bruce didn’t race an F1 car at Silverstone in 1966 – his new team’s chassis wasn’t ready for the International Trophy – but the British GP at Brands saw a landmark achieved as the rookie outfit scored its first championship point for sixth place.

He was back in an F2 car for the BARC 200 at Silverstone in March 1967, earning fourth place in his M4A – a race won by Jochen Rindt, the man who had succeeded him as Cooper’s F1 team leader. He also finished fifth in the International Trophy in the BRM-powered M4B. 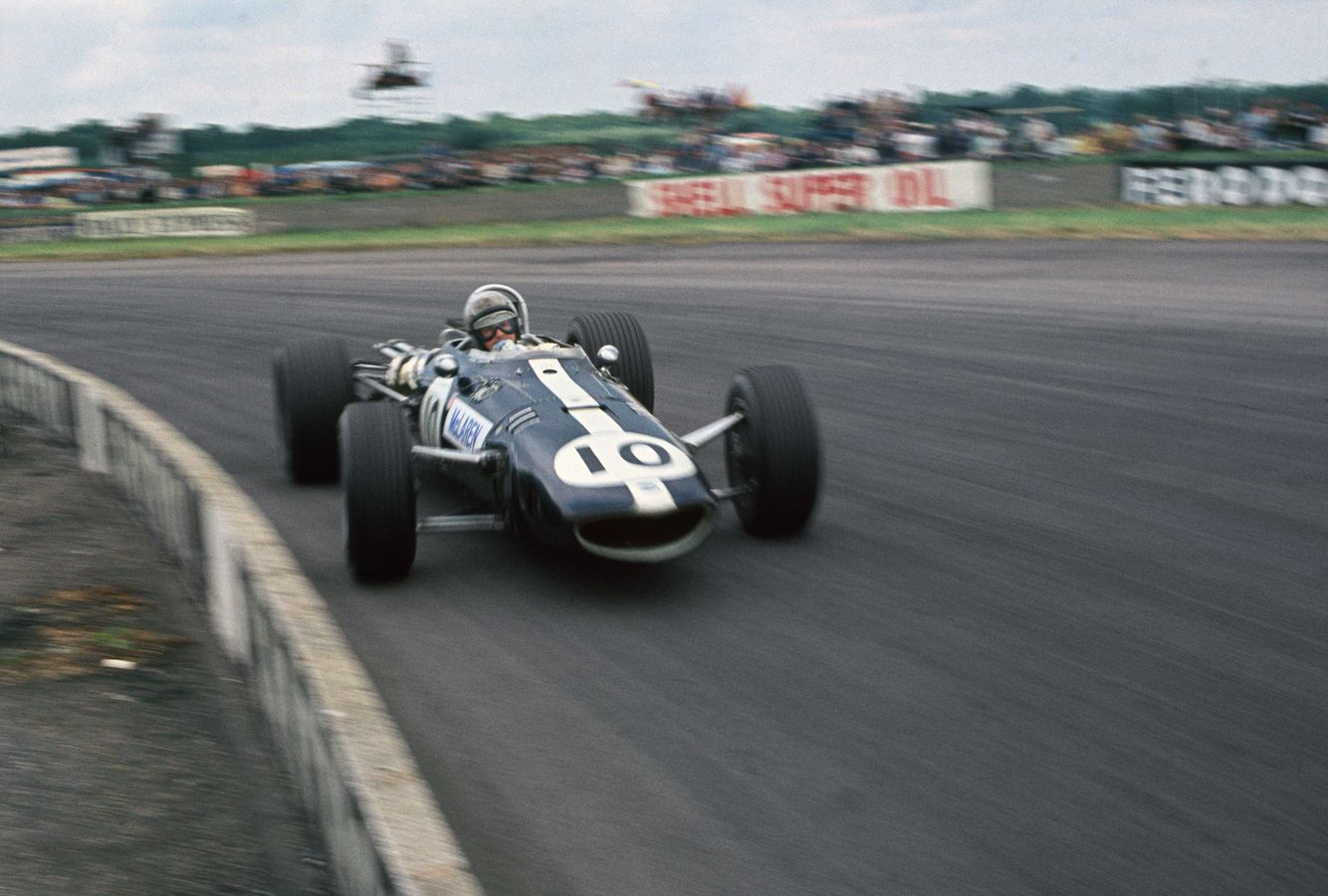 In the middle of ‘67 Bruce’s friend Dan Gurney invited him to drive a second Eagle-Weslake, so he parked his own car for three Grands Prix. Unfortunately all of them, including Silverstone, ended in mechanical retirements. He watched most of the British GP from Becketts corner.

The 1968 season was a turning point for the McLaren team. First used by Lotus, the new Cosworth DFV V8 engine was now available to customers, while reigning World Champion and fellow Kiwi Denny Hulme moved over from Brabham to join Bruce. The new M7A, painted papaya orange, was neat and pretty – and, more important, competitive from the start.

In March Bruce won the Race of Champions at Brands Hatch from pole, and set a new lap record. Five weeks later at the International Trophy Hulme started from pole. Initially Bruce battled for the lead with BRM’s Mike Spence before his new team-mate – slowed by a broken goggle lens – joined the fight. Spence then retired and Denny and Bruce went on to score a memorable one-two, with their countryman Amon taking third for Ferrari.

This was a big achievement for the McLaren team, and it was probably the most memorable day Bruce ever enjoyed at Silverstone: “Finishing first and second in a race is great for any team,” he said. “But to do this just before the World Championship season really gets under way is quite a morale booster.”

He raced twice at Silverstone in 1969, earning sixth in the International Trophy, and then a solid third in a classic British GP, where Jackie Stewart and Rindt fought for the lead until two pit stops dropped the Austrian back.

He would appear just once more at the venue, in the International Trophy in April 1970. He took his M14A to fourth place in Heat One and fifth in Heat Two, and was classified fourth overall. He was delighted when Amon finally scored his first F1 victory, at the wheel of the new March 701.

Sadly, it was to be Bruce’s last outing not just at Silverstone, but also in front of a British crowd – some five weeks later he was to lose his life while testing his new Can-Am car at Goodwood.

Firing up the M8D to mark the life of Bruce McLaren