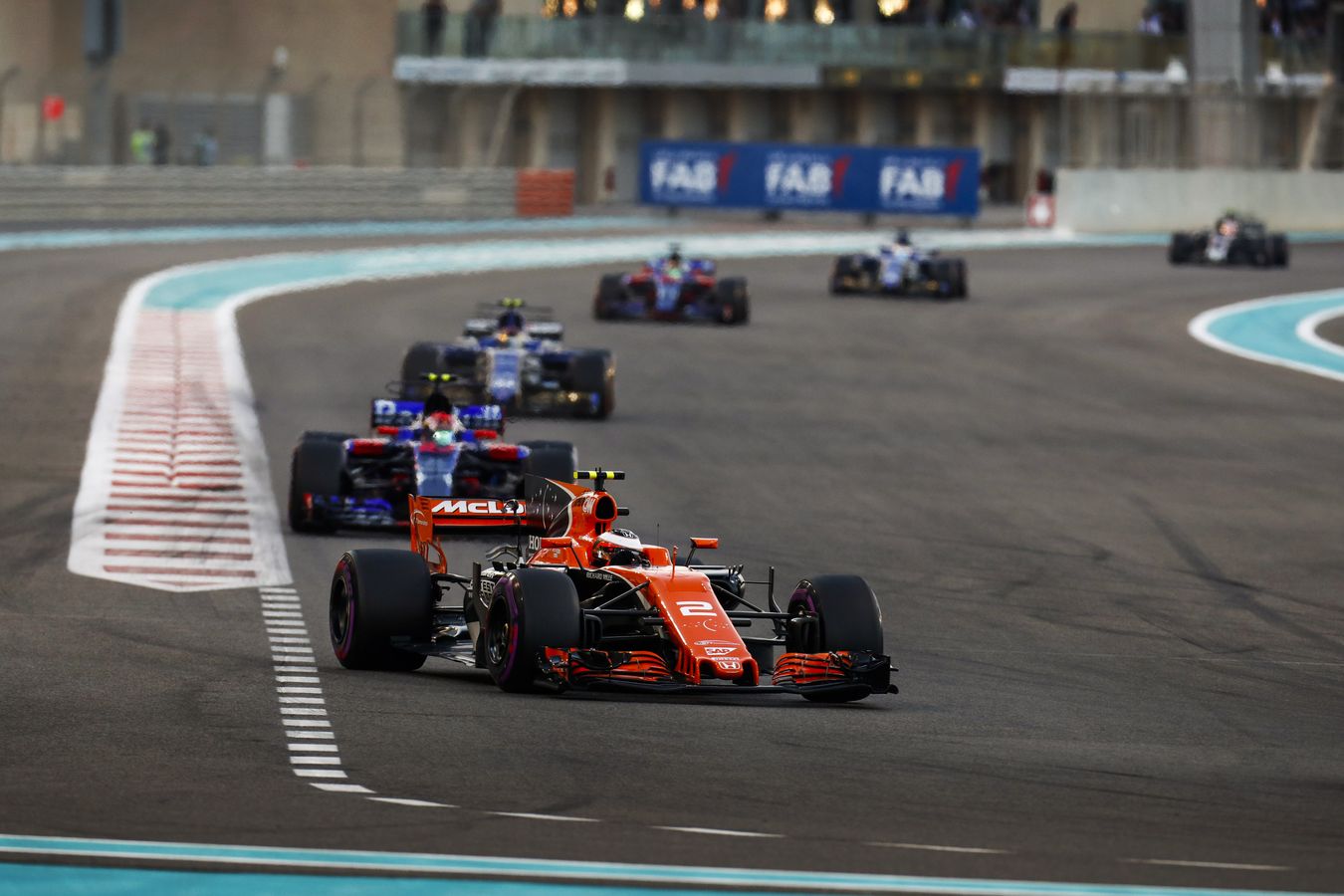 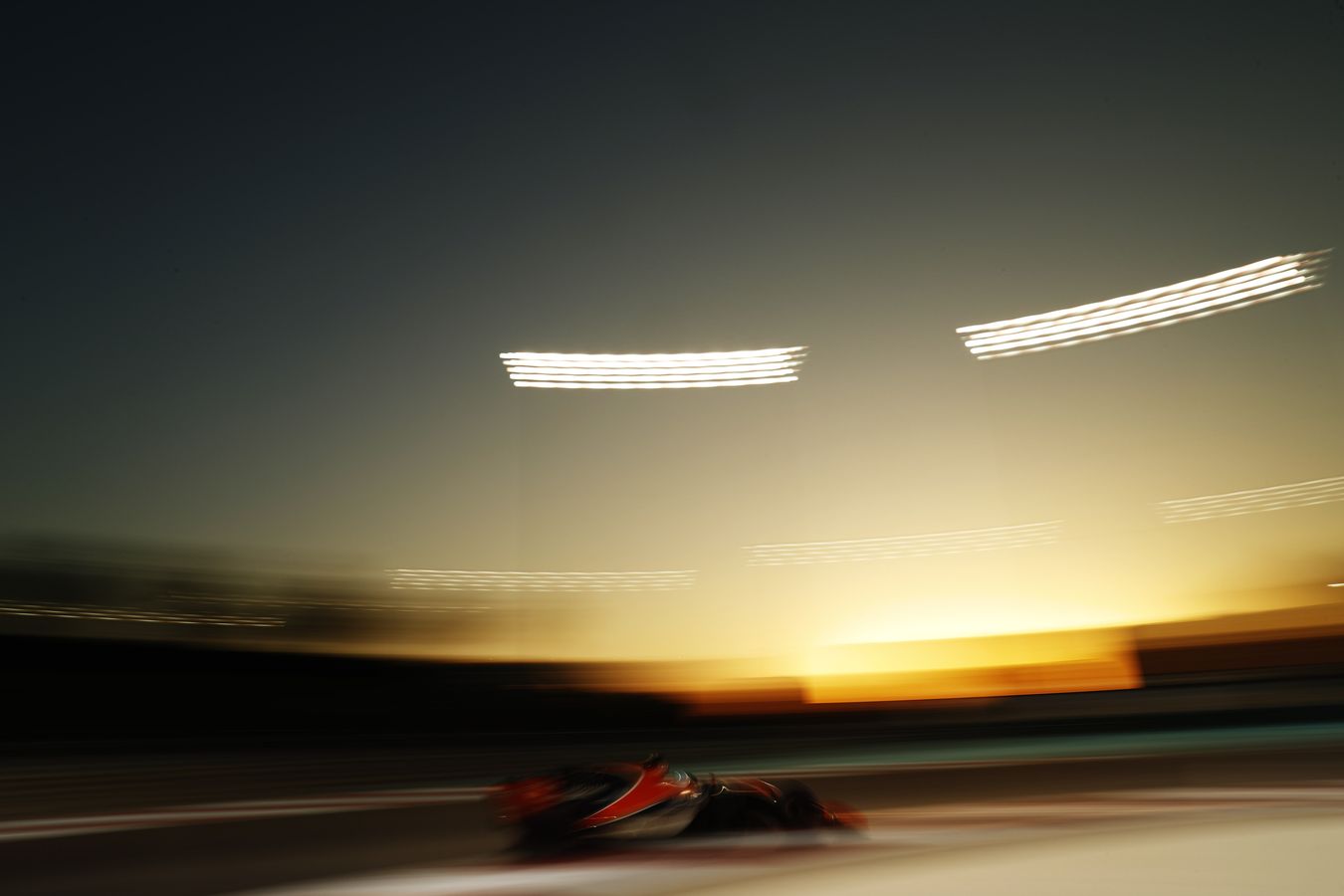 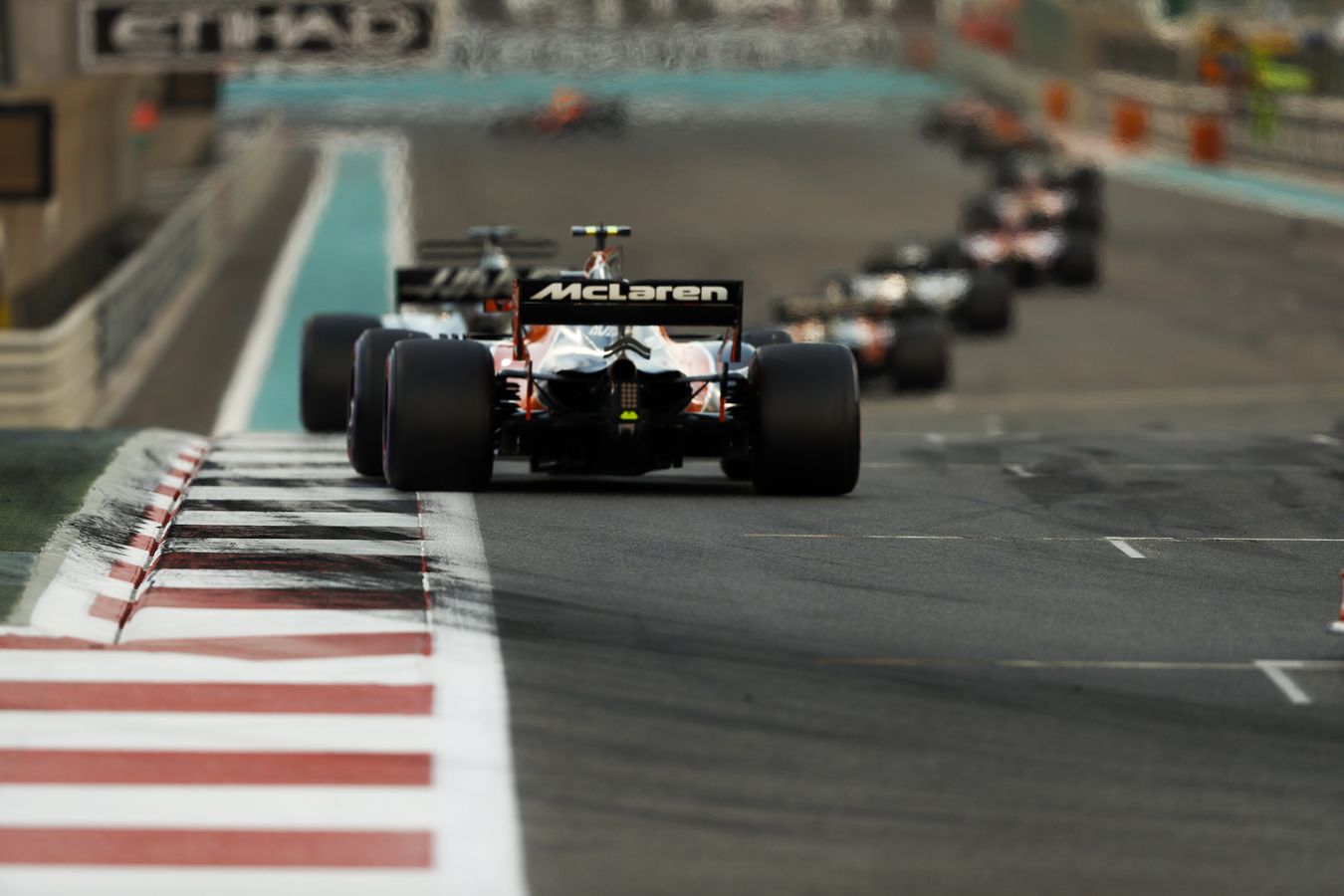 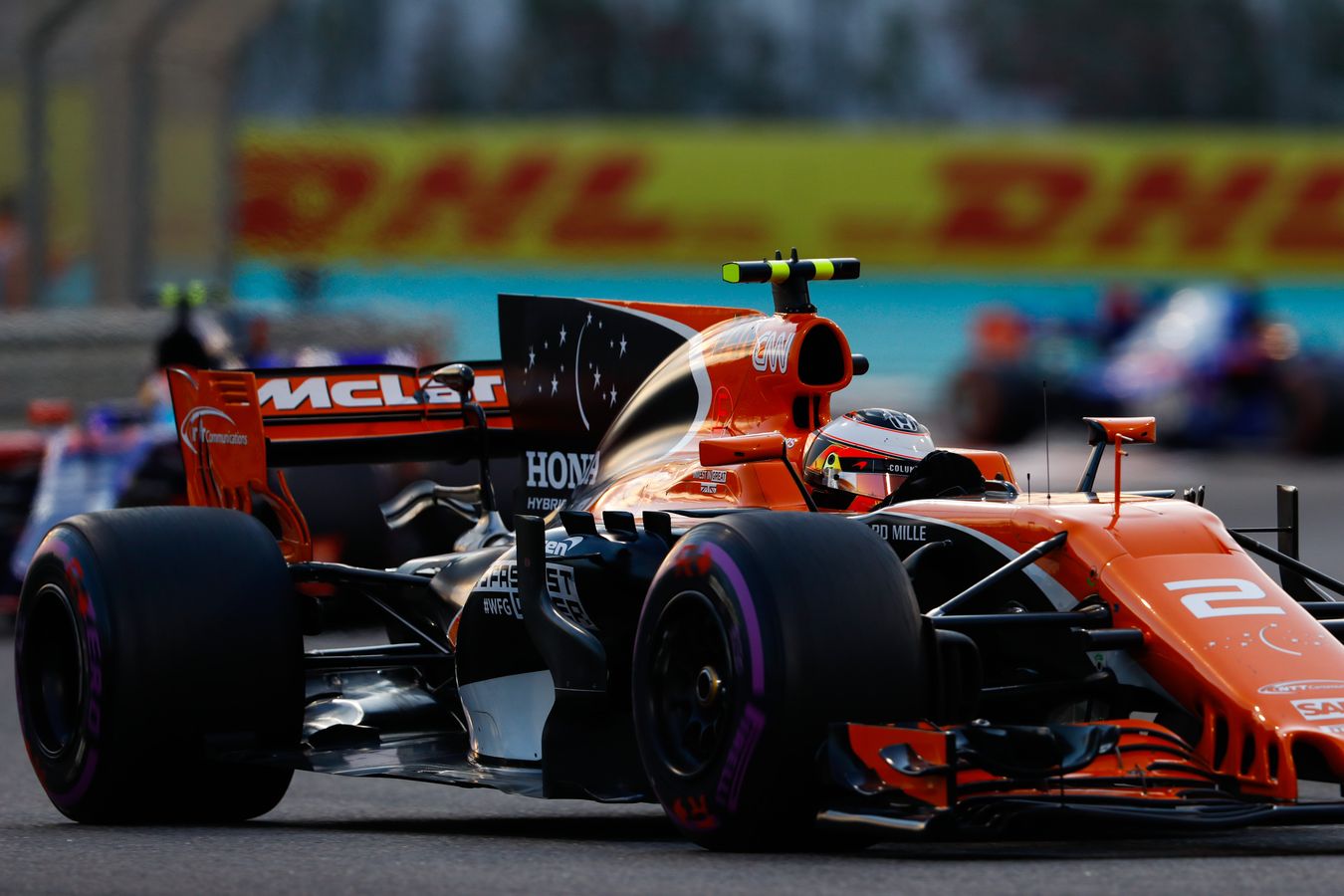 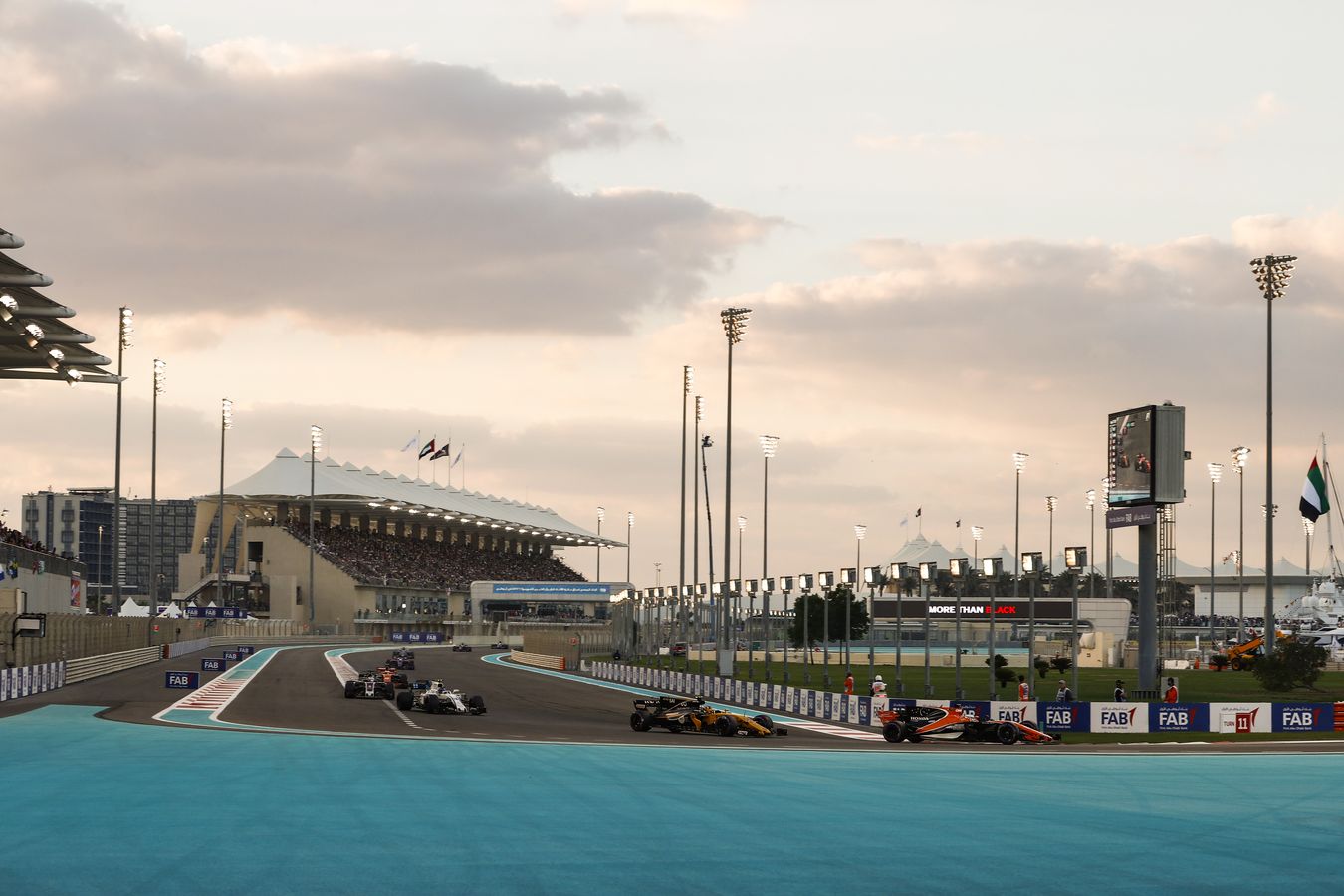 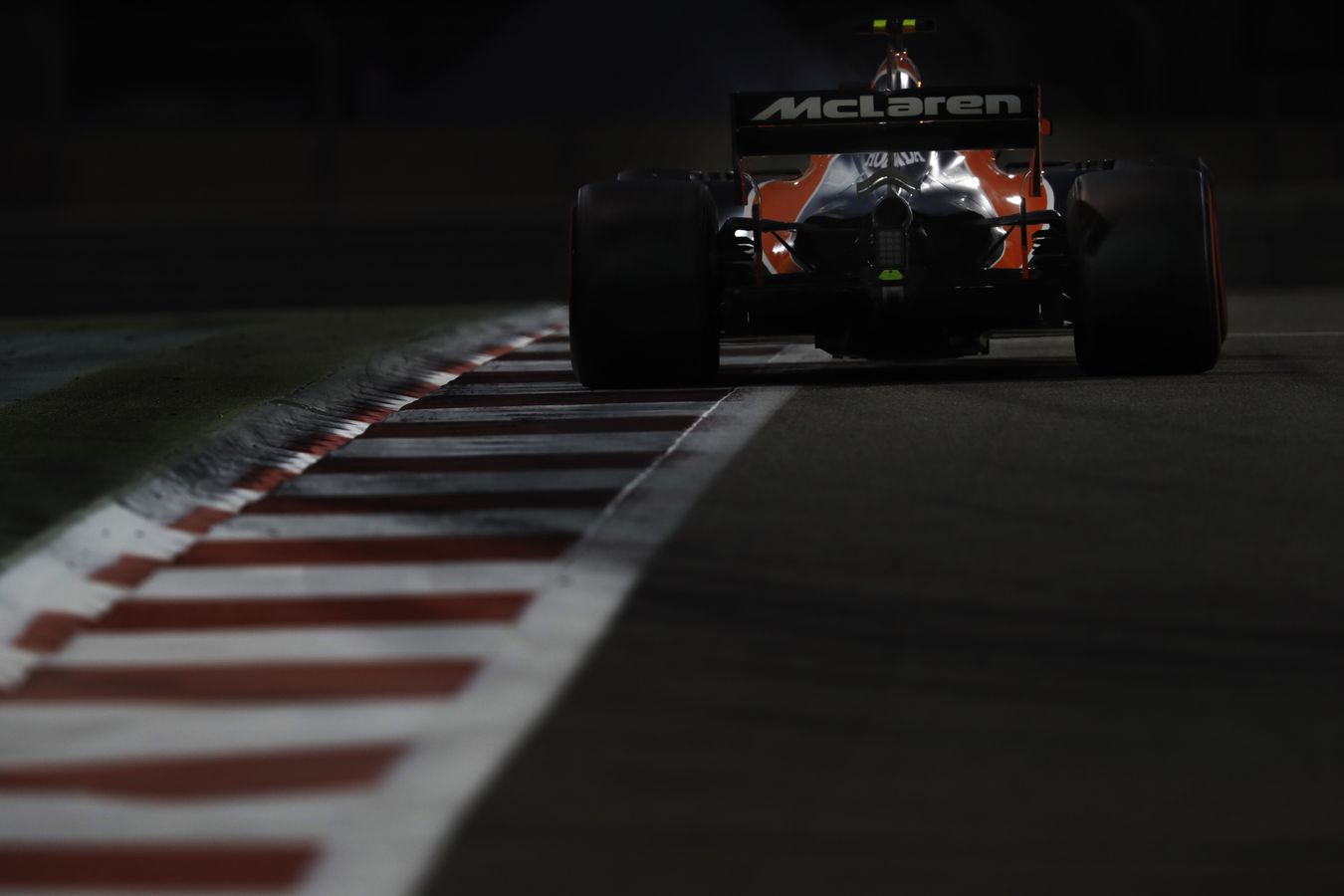 A hard-fought but ultimately rewarding end to a challenging Abu Dhabi Grand Prix and the last of the current McLaren Honda partnership.

Both drivers made strong starts off the line, but Stoffel slipped back a couple of positions on lap one after being squeezed into the first corner. Fernando fought hard to close up to Felipe Massa in 10th position in front, and the team’s strategy worked perfectly to leapfrog him further forward and within a close enough distance to bear down on Massa’s rear wing. After a fun and fair battle over a number of corners, Fernando made a stunning pass down the back straight for a single world championship point, before retirement for Carlos Sainz gifted him a second point for ninth place.

The team detected significant damage on Stoffel’s car very early on, making his race incredibly tough from the beginning and forcing him to nurse his car from start to finish to get it across the line. The team elected to bring him in for an early pit-stop on lap 12 to assess the damage and try to alter his balance settings in order to improve the handling. While it helped and he reported a slightly better feeling in the middle section of the race, it still didn’t rectify the issue, and he had to work hard to keep the fighting pack of five cars behind him for the rest of the race, which he duly did.

Despite an otherwise relatively uneventful race, the Abu Dhabi Grand Prix marks the end of a challenging year for McLaren Honda, but we sign off the 2017 season on a positive note and two ever-valuable championship points.

“This was an important race for us. It was the last one of this project and we wanted to finish it in a good way. It wasn’t that exciting from our position, but we had an interesting battle with [Felipe] Massa in front and Carlos [Sainz] behind. We chose to undercut Felipe and it worked quite well, but after that we were struggling with the pace and running alone for most of the time. But, we had a solid race, a good start, a good strategy and scored two points, so I’m happy.

“It has been a tough season and a tough three years for us, but I’m still feeling very proud of this project. We didn’t succeed in terms of results and we delivered below expectations, but nevertheless everyone fought and worked very hard.

“Now that we are both going our separate ways, we wish the best for Honda and good luck to the McLaren Renault project also. Now it’s a new chapter for both of us.”

“It was a very difficult start to the race. There was some damage to the car – we were really struggling and something felt very wrong. It was a bit like driving a rally car out there! There was no grip at all, the car was sliding around a lot and it felt like a big problem, so it was very tough from the beginning. I didn’t have a nice feeling in the first stint, and even after the early pit-stop to assess what was wrong, I was continuing to struggle. Gradually everything got a little bit better and we recovered a bit, but I still felt very uncomfortable in the car and the pace was nowhere near where it should have been. We need to check what exactly happened there.

“I was happy to see the chequered flag today and close off the season. I think we maximised everything we had today to see the finish and keeping the cars in the pack behind us was the best we could have done under the circumstances.

“It’s been a season with a lot of ups and downs, and in terms of results it’s not been the season we were hoping for. We had a lot of technical failures and grid penalties which meant we were lacking a lot of performance and track time. We’re happy to come to the end of the year and we’re looking forward to a fresh start next season. We’re massively motivated for next year – there’s a lot of work to be done but we’re excited for a new challenge.”

“Today was a hard-fought battle for the whole team to get us both to the end of the race and the end of the season. Our drivers did a phenomenal job on a circuit where it’s notoriously difficult to overtake, and to finish with a couple of points as a net result of all our efforts feels more than thoroughly well-deserved. Fernando, in his usual inimitable style, drove his heart out all race to try and aim for points, and didn’t give up pushing until the final lap. He, his engineers and his mechanics did an excellent job to help him close the gap to Felipe Massa in his pit-stop and then ultimately get the job done on track with a great move past him along the back straight.

“Stoffel had an extremely tough race and did an incredible job to maintain 12th position to the end after he was faced with a serious handling issue from the start of the race. While we still don’t know exactly what caused it, we could see from his data he was suffering from a huge loss of downforce which made his car all but undriveable. He put in a sterling performance not only to keep the chasing pack of five cars behind him for the duration of the race, but bring the car home in one piece. While the team tried to ameliorate the situation by adjusting the balance of his car during an earlier than planned pit-stop, it still meant he was working hard at the wheel throughout this evening’s long, hot race, and he nursed his car impressively well to bring it home across the line.

“Firstly, a huge, heartfelt thank you and well done to all the men and women at McLaren Honda, whose work ethic, dedication and passion for this team I’m quite sure is unrivalled anywhere in the pit lane. They’ve put everything into making our team what it is and I’m proud of the unshakeable spirit that makes us never stop fighting no matter how difficult the circumstances. For our incredible fans, we hugely appreciate their loyalty and unwavering support, and express our sincere gratitude for their incredible devotion over the past year. Thanks too to our partners for their faith and enthusiasm towards us throughout this season, and we look forward to a new and exciting era for us all in the near future.

“Finally, on behalf of everyone at McLaren, I’d like to offer sincere thanks to Honda for working so hard alongside us to constantly strive to learn, develop and improve. And, while nobody can deny it’s been an incredibly challenging season, we end our partnership in Abu Dhabi with a stronger relationship than ever and plenty of healthy respect. There have been highs and lows over the past three years, but we have no regrets, and every member of the entire McLaren Honda team wishes each other well for the next chapter in our respective histories.”

“Today’s final race as McLaren Honda was emotional for all the team, but it was also a good result on track with both cars taking the chequered flag, and Fernando scoring some more championship points.

"After making a good start, Fernando kept chasing down Williams’ Felipe Massa and he succeeded to overtake into P9, utilising the team's great pit-stop strategy. Stoffel also pushed very hard and finished a strong P12 despite suffering early damage to his car. Overall, I am proud of both drivers for showing their best performance without giving up at any point during this tough season.

“We were able to show stabilised PU performance over the last few races to round out the season, which considering the tough start to our year, we can take as a positive step forward.

“The last three years have been extremely challenging, but I would like to express my sincere appreciation to the McLaren Honda drivers and team members for all of their relentless hard work. And, of course, to all our fans who have kept us going with their incredible support.

“Honda Racing F1 is now fully focused on the development for 2018 and we will make our best efforts in order to have a good start in the coming winter testing.

“Finally, we wish McLaren every success with their new partner.”

We catch up with our 2018 test and reserve driver