Despite a championship history stretching back only as far as 2008, the Singapore Grand Prix has swiftly established itself as one of F1’s marquee events. The night race that threads its way through an illuminated cityscape is visually spectacular – though it’s the atmosphere generated by the enormous crowd that makes the equatorial evening event memorable.

Marina Bay features the street circuit staples of low-grip surface, unforgiving walls and a paucity of overtaking opportunities. Second and third-gear 90° turns predominate on the 5km (3-mile) circuit, keeping average speeds low. With lap times in the mid 1m50s and a strong likelihood of Safety Car intervention, it’s the race most likely to be halted at the two-hours time limit rather than by going the distance.

Singapore is, of course, a maximum downforce race and the frequent use of kerbs also requires a car that’s quite soft. It’s a tough race on brakes – not for any one heavy event, but rather the non-stop nature of braking around the circuit.

It’s also a very tough race on crews and drivers. While a night race means lower temperatures, the mercury still tends to be above 30°C. Coupled with the high humidity and the length of the race, it’s the venue at which the drivers will suffer the most, losing several litres of fluid over the course of the race.

McLaren has a solitary victory in Singapore (2009), but Fernando is a double winner in the city-state. 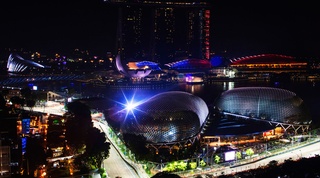