The Malaysian Grand Prix is relocated for 2016. One of the season-opening flyaway races for most of its existence, the race at the Sepang circuit has now moved back to an October date, forming, along with Singapore and Japan, a late-season Asian flyaway block. The first two Malaysian Grands Prix, held in 1999 and 2000, were also October races, and respectively the penultimate and final races of their season. It is a good example of how the calendar has expanded in a decade and a half: there are now five grands prix following the trip to Malaysia.

Located only 350km (217 miles) from the equator, moving from a spring to autumn date doesn’t greatly affect the ambient conditions for the race: temperatures, humidity and average rainfall are much the same for October as they are for March. Sepang will provide a venue that is hot, fast, tough on tyres and with a very strong possibility of rain.

While the long back and pit straights dominate the aerial view of Sepang, it’s the middle sector where much of the work gets done with some high speed turns that require stiff suspension. This is encouraged by the low and gentle kerbs around the circuit, which allow the car to run very low.

Fernando is a three-time winner at Sepang, with this figure including his first McLaren victory back in 2007. Jenson won the Malaysian Grand Prix in 2009 with the race awarding half-points, having failed to make three-quarter distance. Torrential rain and the impossibility of completing the distance before the light failed, saw it stopped after 31 of the 56 laps. 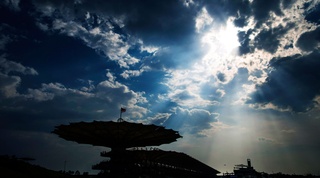