Formula 1 did not visit Germany in 2015, the first time that has happened since 1960. Thankfully, this year the proper order has been restored and F1 signs off for the summer break with a race at Hockenheim.

The Hockenheimring had its teeth drawn at the start of the 21st Century. The long straights through the forest have gone, replaced by a more technical layout that, while perhaps not providing spectators will quite the same thrill, certainly gives them a lot more laps to enjoy.

Setup here usually involve medium-high levels of downforce. The narrow stadium section demands high downforce, as do the high speed corners that come before it – but this is tempered by the run up to the hairpin which requires a car that’s fast in a straight line. The hairpin itself is both the circuit’s only real heavy braking event and its best passing opportunity. Even with this, the circuit hasn’t proved to be overtaking-friendly. Eight of the nine German Grands Prix held at Hockenheim since the renovation have been won from the front row. 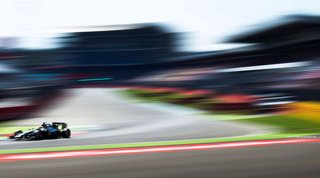