The second race of the 2016 season is also its first night race. Bahrain arrived on the F1 calendar in 2004 but the vibe around the grand prix changed in 2014 when the floodlights went up and the start time moved to early evening. The change has definitely added something special to the event.

The Bahrain International Circuit is surrounded by desert and frequently affected by strong winds which will hamper the balance of the car. Though an impressive track sweeper keeps the surface clear, dust in the atmosphere always concerns engineers, given its potential to increase wear on gearbox and engine internals.

Downforce levels in Sakhir are relatively similar to those at Albert Park, but the emphasis at the Bahrain International Circuit is very much on brakes and tyres. In terms of braking, BIC features several long straights heading into slow corners and thus will provide the season’s first real challenge for braking packages, with engineers keeping a close eye on both temperatures and wear levels. For tyres, the abrasive surface provides good grip but also high wear – a factor that has frequently influenced the outcome of the grand prix. The stop-start nature of the circuit doesn’t endear it to drivers but it’s delivered good races for spectators.

Both Jenson and Fernando have won the Bahrain Grand Prix. Jenson did so in 2009 on his way to winning the World Championship, while Fernando is Bahrain’s only three-time winner. 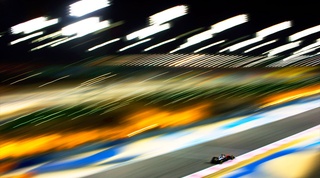