While Formula One continues to expand into new locations, recent years have also seen it make very successful returns to classic venues, with the reinstated Austrian Grand Prix an instant hit with fans. The modern circuit is the same layout as that used between 1997-2003 when it was called the A1-Ring. It is a cut-down version – initially sketched by former McLaren driver Alex Wurz – of the famous old Österreichring.

Rather more pastoral than the average F1 venue, Spielberg and the Austrian Grand Prix has proved to be a great draw for camping fans, and as such provides a wonderful, lively atmosphere for the weekend centred very much on the circuit itself. Cut into the hillside, much of the compact track – one of the shortest in F1 – is visible from any of the vantage points in the grandstands surrounding it.

A medium-downforce power circuit, Spielberg has only nine corners, but covers the full range of conditions with them. A heavy braking zone into the low-speed Turn Two makes it a good overtaking opportunity, while the tricky, high-speed Turns Eight and Nine see many cars bail out and run wide. Traction is key factor, as is tyre warm-up. The short lap and the limited number of corners will see drivers struggling in qualifying to get heat into their front tyres.

McLaren is the most successful team in Austria with six victories. Using the old circuit, Niki Lauda was a popular winner of his home grand prix in 1984 on his way to a third title, while Alain Prost did the same in 1985 and 1986. More recently Mika Häkkinen (1998 & 2000) and David Coulthard (2001) won on the new layout. 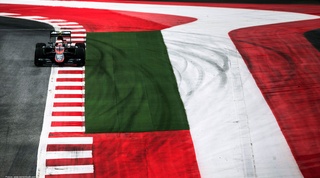