2016 concludes with a finale under lights at the Yas Marina Circuit. Formula 1’s only twilight race starts in early evening sunshine and concludes in the dark. It provides a brilliant arena for what, on several occasions in recent history, has been a title decider.

Yas Marina is a curious circuit where each of the three sectors exhibits different characteristics. Sector One contains the high-speed Turns Two and Three. The need to dial out understeer here, particularly in the quick Turn Two, will define where the front wing is set. Sector Two contains the two long straights, each of which terminates in a tight chicane for which the cars brake down from 300km/h+ (186mph) to sub-100km/h (62mph) speeds. The kerbs at Yas are high but riding them at the chicanes and getting a good exit is key for a fast lap, so the car is set up with relatively soft suspension – but not too soft as the chicanes also demand a swift change of direction.

Sector Three is reminiscent of a street circuit: it winds around the harbour-front and under the Viceroy Hotel with rapid changes of direction and close-in barriers. The action tends to come at the end-of-straight chicanes, but the lap time is to be found in this final sector. This necessitates a trade-off between low drag for those two long straights, and more downforce around the harbour. The usual approach is a medium-high downforce setting.

The Abu Dhabi Grand Prix arrived on the calendar in 2009. To date, McLaren has one win and two pole positions on the island 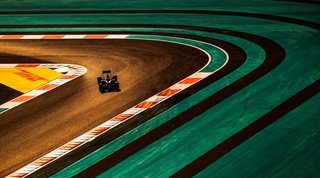