Rumours of a Formula 1 race in Russia, circulating for three decades, finally came to fruition last year with the inaugural Russian Grand Prix held in the Black Sea resort of Sochi. The Sochi Autodrom, constructed to thread through the Olympic Park that was the centrepiece of the XXII Winter Games, had great facilities and a lively crowd that made the first race a great success.

The circuit is a street course in the style of Valencia but – having been planned as part of the Olympic Park – the layout is more akin to a traditional permanent circuit than is common for a street course, with the long U-shaped Turn 3-4 being a particularly unusual feature. The circuit is the third longest on the calendar behind Spa and Silverstone and, in 2014, pushed fuel consumption in the new restricted formula to the limit.

A key – and slightly unexpected – characteristic of the circuit was the lack of tyre wear. The smooth surface led to a one-stop race being the standard strategy. On paper, the circuit appeared to have several good overtaking spots – but the slow corners before the DRS zones made following another car very difficult. The great hope for 2015 is that the accumulation of data last year will make for a more thrilling grand prix this time around.

With fourth and fifth positions last year, McLaren made a solid start to racing in Russia. The team did, however, enjoy success in Sochi earlier in the year – with Lizzy Yarnold winning gold on a McLaren-designed and constructed skeleton sled. 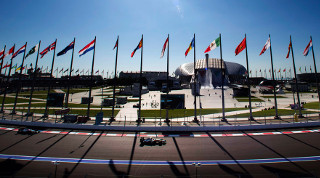