The Monaco Grand Prix a highlight of the global sporting calendar and very much the jewel is Formula 1’s crown. It is simply the most glamorous, most talked-about race of the year. It’s also a very stern challenge for team and driver.

The layout of the racetrack around the narrow streets of the Mediterranean principality has changed little since the beginnings of the World Championship. This makes it a wonderful opportunity to become immersed in the history of the sport but also makes the race something of an anachronism for the modern calendar. It’s certainly the grand prix with the lowest average speed – but the proximity of the barriers and the tight radius turns make it feel like the fastest.

The unusual characteristics of racing around Monte Carlo sees cars leave the garage in a one-off specification. The circuit around the harbour demands the highest downforce levels of the season, while the unique profile of Loews Hairpin requires extreme adaption to both steering geometry and suspension settings. Suspension in general is very soft, to cope with the bumpy streets – but even with a soft car, drivers will go off-line to avoid the worst of the undulations – particularly on the run down from Casino Square to Mirabeau.

With passing opportunities at an absolute premium, this is a race where track position is absolutely vital – but with the circuit being very easy on tyres, it is frequently a one-stop affair, something that limits teams’ ability to spring a tactical surprise. This serves to shift the pressure to the garage – from strategists to the pit crew.

McLaren’s record in Monaco is peerless, comfortably the best performer on the famous street circuit, including a glorious decade in which the team brought home the trophy on nine occasions, with four victories for Alain Prost (1984, 1985, 1986, 1988) and Ayrton Senna’s famous five-in-a-row 1989-1993. Our current pairing have both been victorious in Monaco, with Fernando winning the race in 2005 and 2006 and Jenson the 2009 edition. 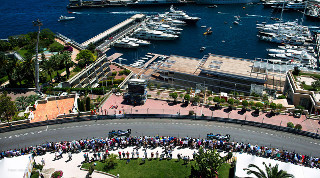 Monaco GP: The Story in Pictures

13 turns to test your Monaco know-how