Budapest has changed dramatically since Formula 1’s first visit in 1986, but in this, the 30th year of the Hungarian Grand Prix, the circuit and the charm of the city are little altered by the passage of time.

The track has the lowest average speed of any permanent circuit on the calendar, earning it the nickname ‘Monaco Without The Walls’. Driver opinion is mixed: most enjoy the challenge of putting together a qualifying lap – but the limited overtaking opportunities on the tight, twisting layout, tend to make racing a little frustrating.

The circuit is a maximum-downforce track, prone to understeer and requiring soft suspension to ride the kerbs of the twisty middle sector. Like Monaco, track position is of paramount importance; unlike Monaco, high track temperatures are common and frequently lead to this being a three-stop race – therefore it is one in which strategy is often absolutely crucial.

Famously, both Jenson and Fernando took their debut victories here, Fernando in 2003 and Jenson, memorably, charging from the midfield on a rainswept afternoon to take victory for Honda. Jenson added a second victory in 2011, one of our 11 on this circuit. 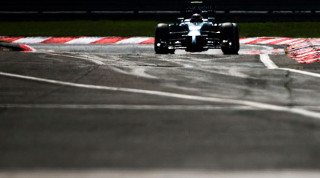