The Shanghai International Circuit is a statement that can be seen from miles around, with gigantic grandstands that dwarf the landscape in which they are placed. It’s not the only oversized feature of the circuit: SIC is also home to a 1.17km back straight, currently the longest in F1. Together with a long pit straight it ensures the Chinese Grand Prix never lacks for overtaking manoeuvres.

The other distinctive features of SIC are the two radial turns (frequently referred to as the ‘snails’) found at the end of the pit straight and before the back straight. They provide a difficult proposition for drivers, particularly given the bumpy nature of the track. The circuit is built on marshland and, in common with several other circuits built on similar terrain, the natural settling of the ground has created undulations in the surface which provide an extra challenge, particularly under braking.

The Chinese Grand Prix joined the F1 calendar in 2004 and McLaren are three-time winners of the event. Lewis Hamilton was victorious in 2008 and 2011, while Jenson took a commanding victory in 2010, taking full advantage of damp conditions. Fernando also has two victories to his name in China. 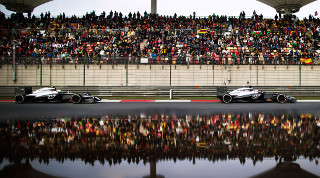