In Formula 1, it’s rare for the car crossing the finish line first not to be declared the winner.

There’s the occasional exception, of course; post-race disqualifications or penalties have certainly overturned the odd race result or two.

But when a race is over before it’s officially finished, with only 54 of the scheduled 71 laps completed, when there’s been no chequered flag, when results are counted back two laps from the display of the red flag, and when torrential rain has already made the afternoon crazy, chaotic and confusing, would you feel confident determining the race winner?

The 2003 Brazilian Grand Prix was one such race. It was a race McLaren won too – albeit briefly. 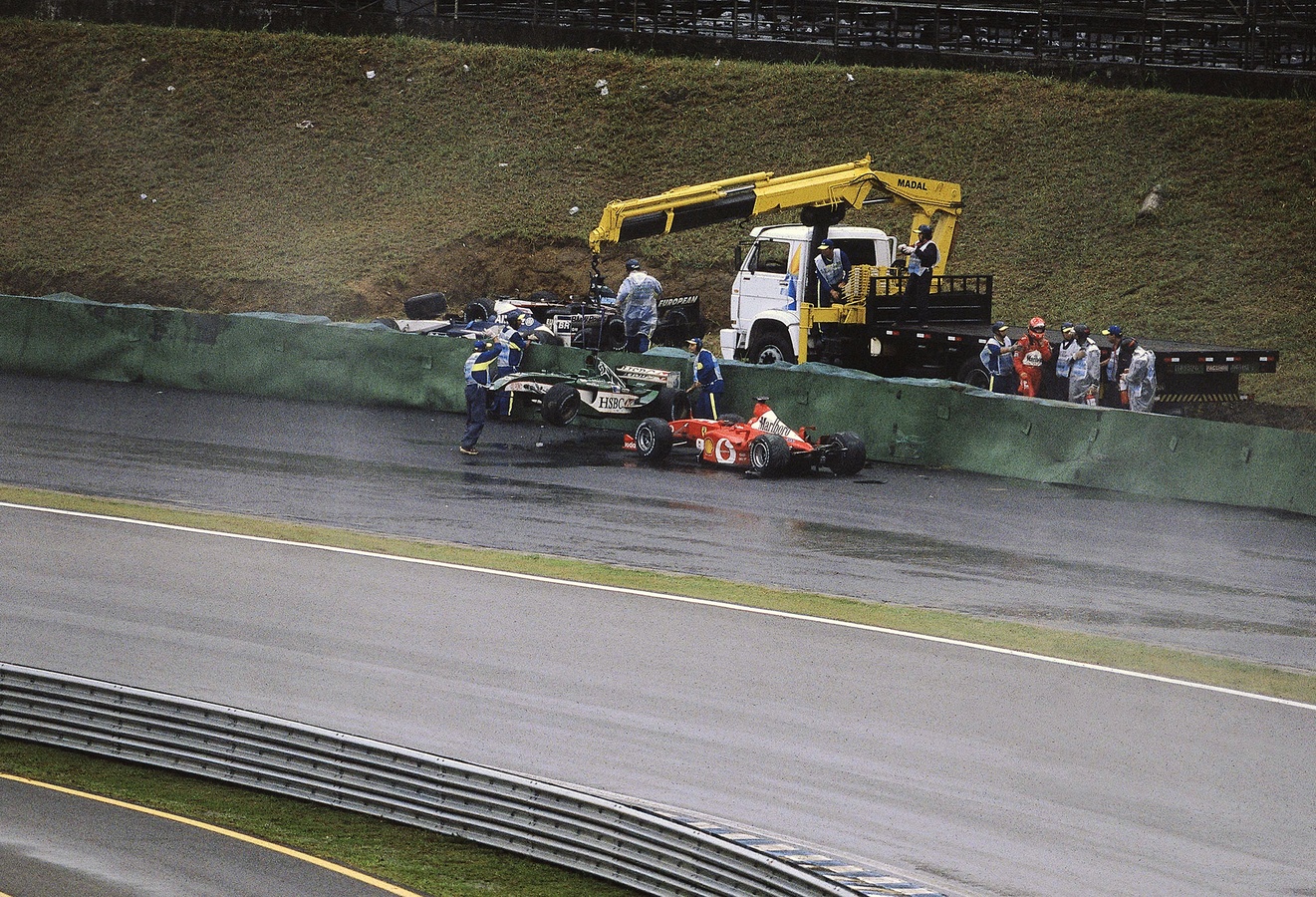 As everyone knows, Interlagos in the rain is a pretty treacherous place – and the 2003 race certainly lived up to form. In particular, a river of water trickled across Turn Three of the track, causing the demise of a number of cars, including Juan Pablo Montoya, Jenson Button, and world champion Michael Schumacher.

McLaren’s Kimi Raikkonen took an assured hold at the front of the race, largely sharing the honours with team-mate David Coulthard. With Schumacher out, Ferrari’s hopes rested with local hero Rubens Barrichello, who was desperate to take a home victory – but the Brazilian was forced out with mysterious fuel pick-up problems, rumour suggesting that he had merely run out of the stuff…

The shunts that preceded the early finish to the race occurred on laps 53 and 54. First, Mark Webber aquaplaned off the track on the straight leading uphill to the finish line. The Australian’s Jaguar lurched into the tyre barriers, causing the car to shed wheels and bodywork as it slewed across the track. 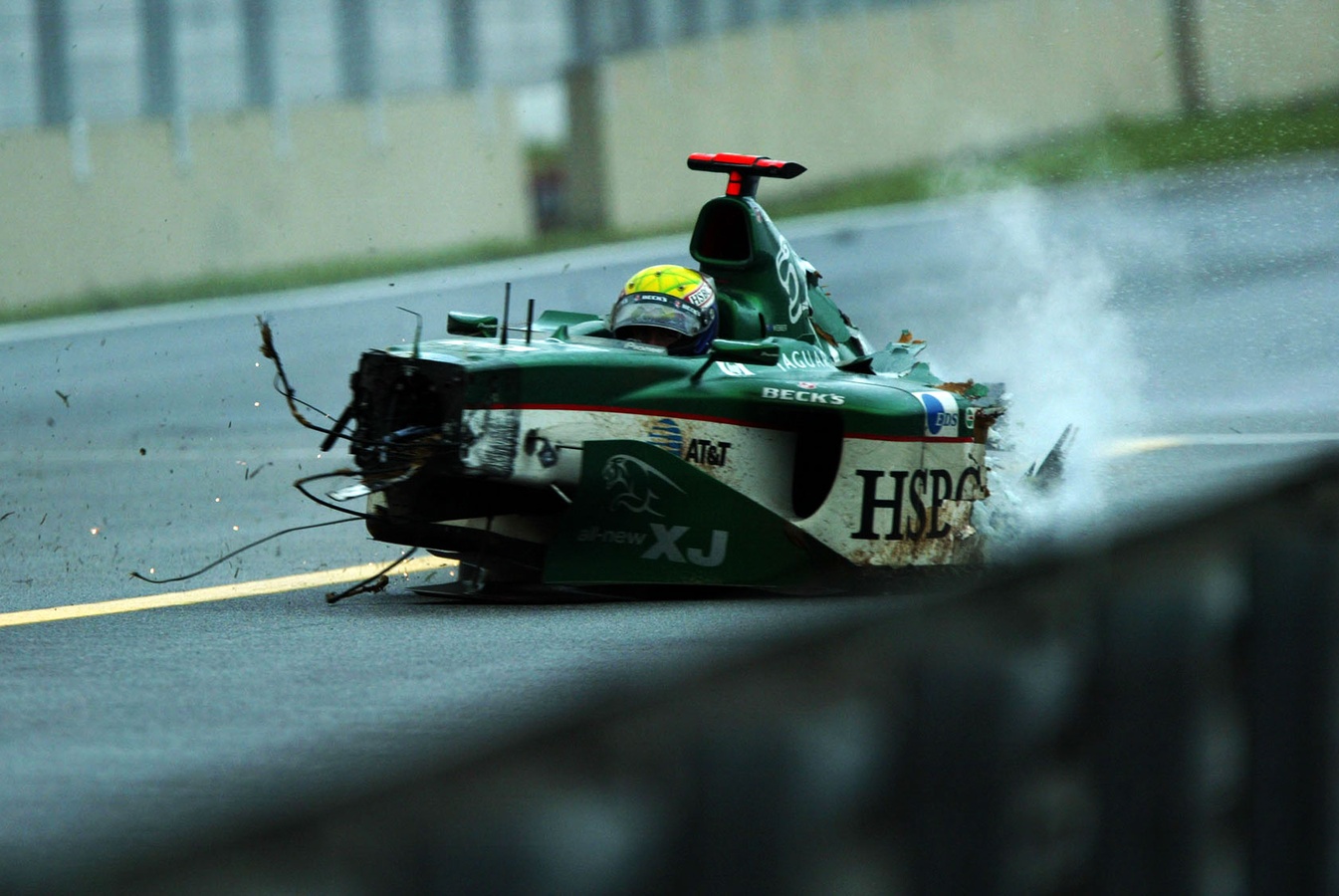 Despite the waved yellow flags, Fernando Alonso arrived on the scene at full-speed the following lap. Faced with a stray wheel on the racing line, the Spaniard jinked left, smashing headfirst into the Jaguar’s wreckage before destroying his Renault in the barriers. He shakily climbed from the cockpit and collapsed at the side of the track.

This was where the confusion started. The race had been red-flagged at the exact point that cars had begun diving into the pits for their scheduled fuel and tyre stops – so nobody had clearly been in front. At first, it looked as though Giancarlo Fisichella had pulled off (another) unlikely victory for Jordan.

With the race halted, there was confusion and consternation in both the media centre and, more worryingly, the timekeepers’ office. Then, after some head-scratching, the officials determined that Kimi was the winner. 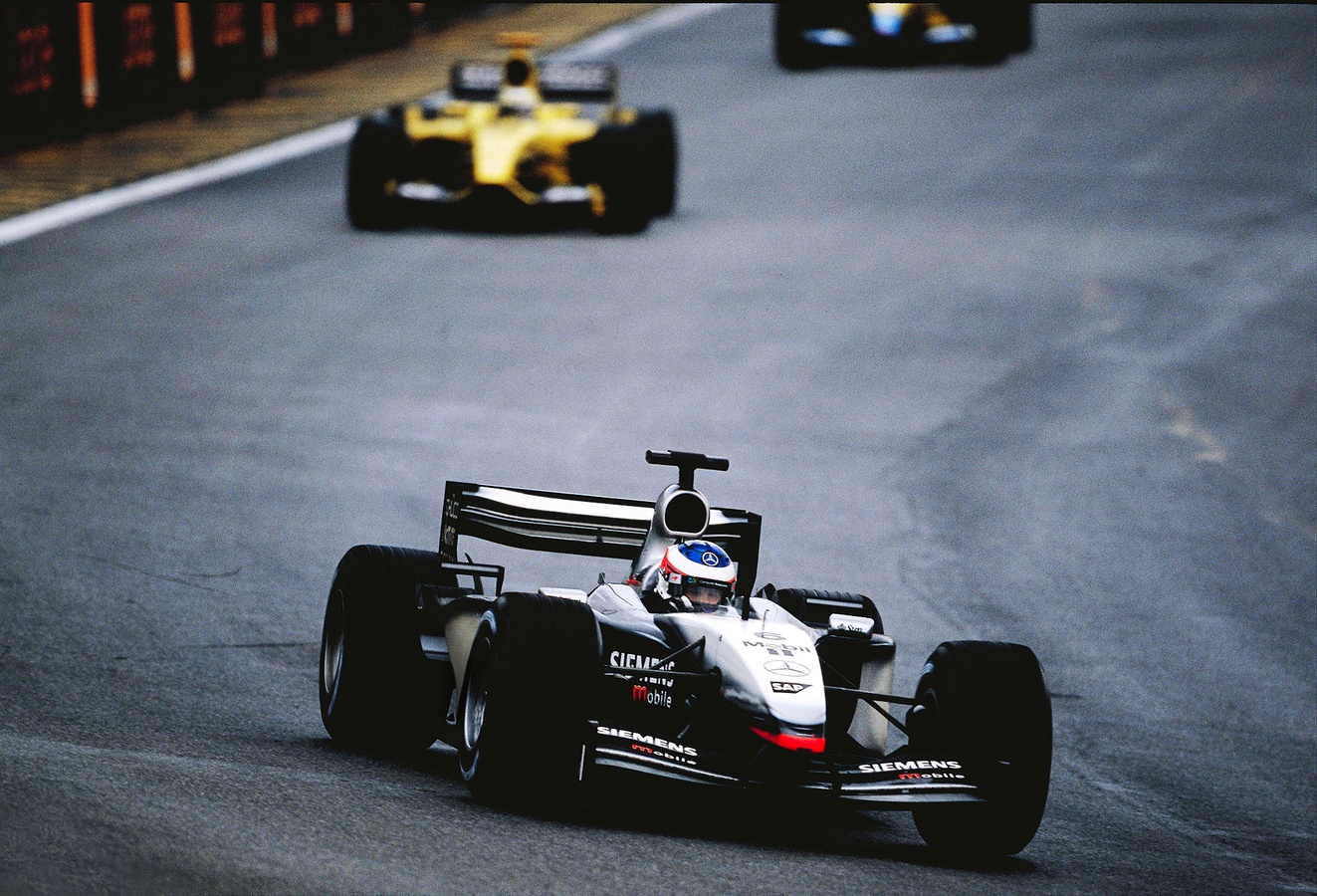 Most aggrieved was probably the Finn’s team-mate, Coulthard, who’d been leading strongly a few laps earlier, but had lost out by dint of having dropped down the order following a pitstop just before the red flags were waved.

It could have been the Scot’s second win of the season, and McLaren’s third consecutive victory – at least, that’s what we all thought as we scrambled back to Sao Paulo’s chaotic and overcrowded Guarulhos Airport on Sunday evening. 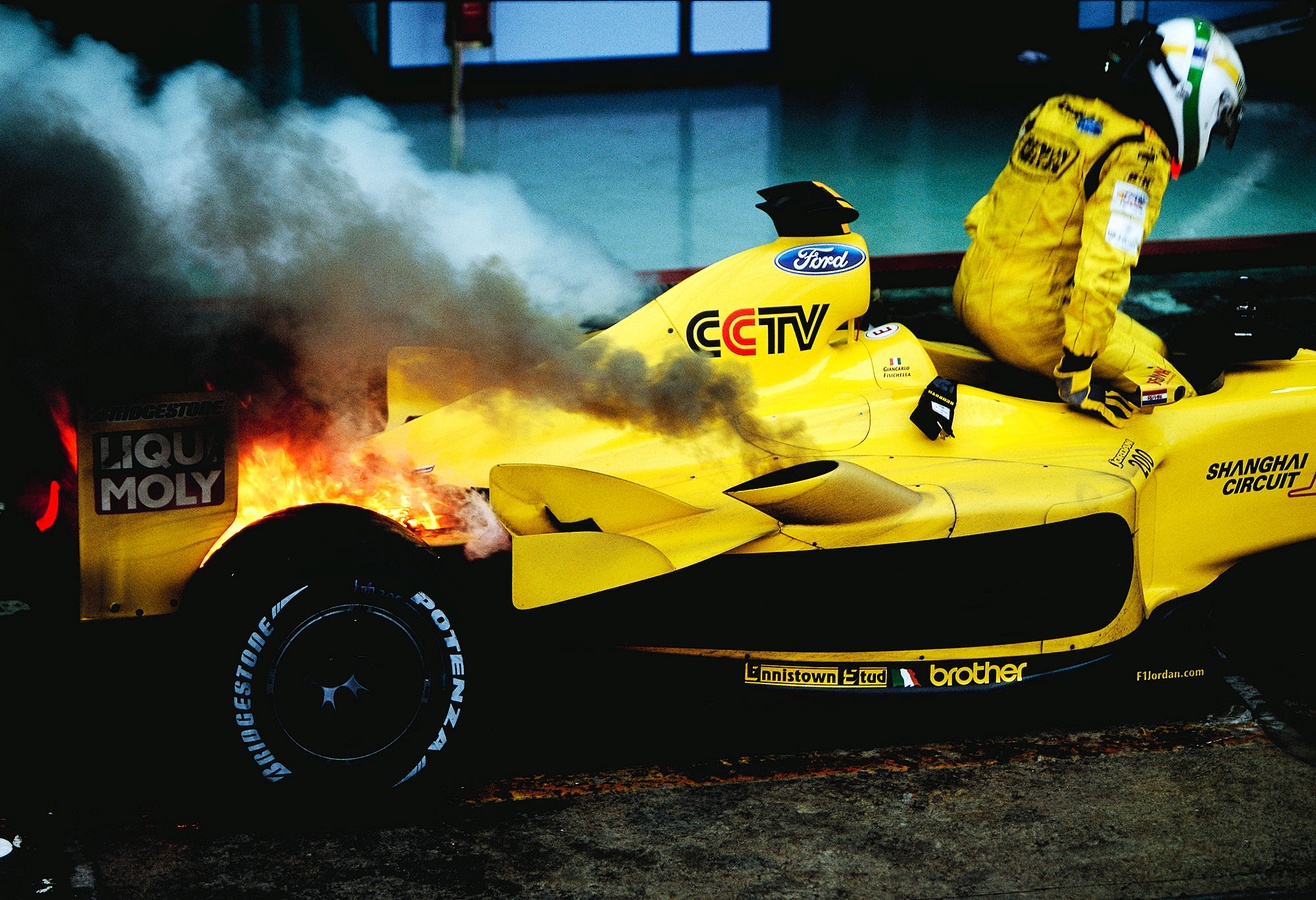 It took a few days for officialdom to acknowledge the problem. Looking at the countback, they finally declared that Fisichella was the victor – a well-received albeit somewhat fluky result considering the Italian had ended the Brazilian Grand Prix with his car on fire in the pitlane! 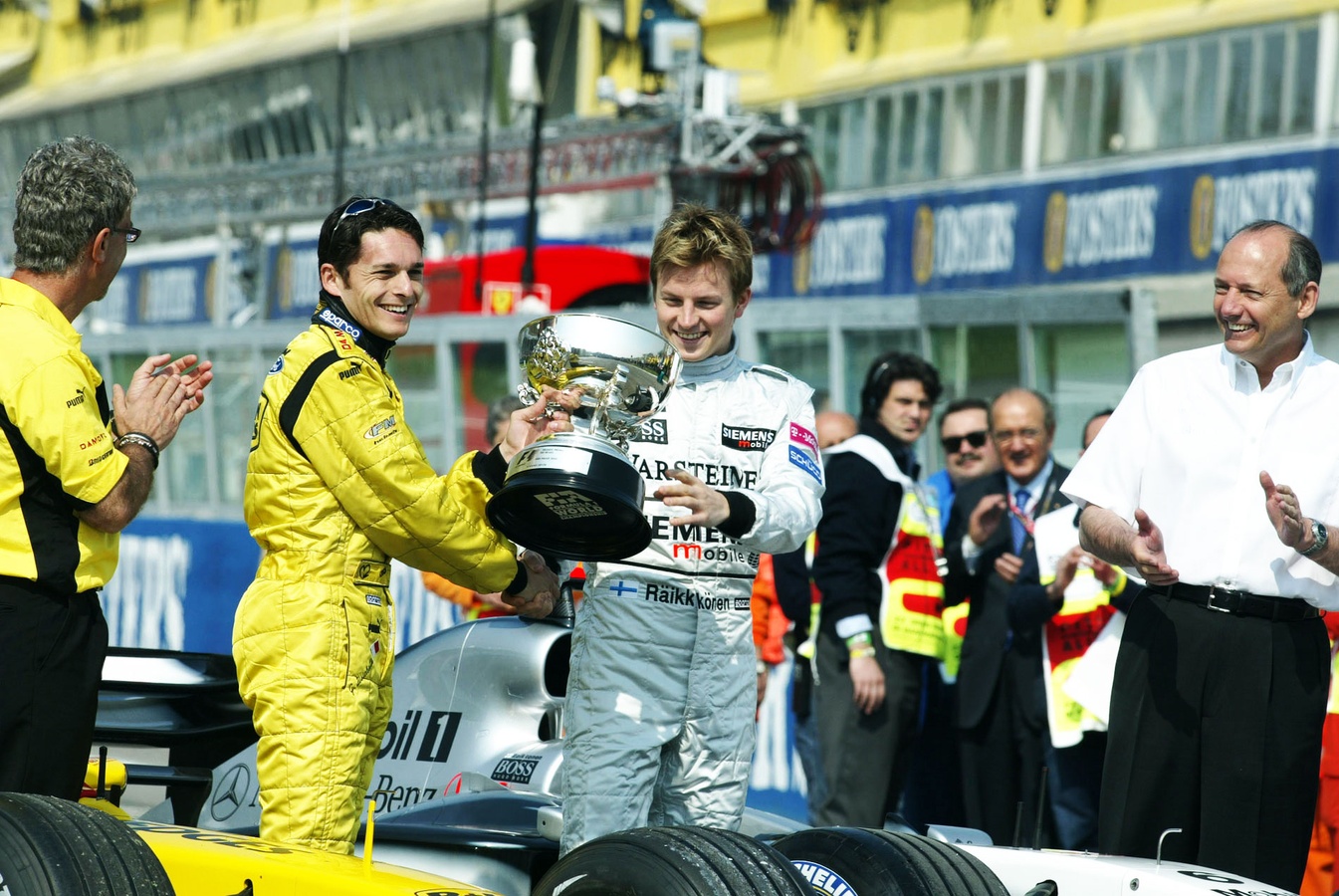 Thus the paddock decamped to Imola two weeks later, where we were witness to a slightly surreal episode on Friday lunchtime as a bemused Eddie Jordan and Ron Dennis met on the pits straight to exchange the rightful trophies.

Has there been a more unusual winners’ ceremony in recent memory? We doubt it…