The penultimate round of the 2015 World Championship sees F1 pay its first visit to the southern hemisphere since the Australian Grand Prix in March. The Autódromo José Carlos Pace – better known simply as Interlagos, the suburb of São Paulo in which it is located – crams a great deal into its 15 turns. The 4.3km layout features a looping medium-low speed middle sector switching back and forth across the hillside, bracketed by the long full-throttle sections up the hill from the Junção corner to the start-finish line and into the overtaking-friendly, heavy-braking Senna S, and then again down the hill from the Curva do Sol to the second good overtaking opportunity, Descida Do Lago.

The demands of the straights tend to dominate thinking with high top speeds rather than cornering performance coming to the fore. Of course, Interlagos in the spring has a habit of producing rainclouds, and teams have been known to take the forecast into account when planning their race setup.

McLaren have a dozen victories in Brazil, comfortably the best of any team. Among the dozen are a popular 1974 victory for Emerson Fittipaldi on the 8km former Interlagas layout, and four victories from Alain Prost in Rio at the Jacarepaguá circuit. On the new 4.3km Interlagos circuit there have been victories for Ayrton Senna, Mika Häkkinen, David Coulthard, Juan Pablo Montoya and, most recently Jenson Button, who completed the thrilling, rain affected 2012 grand prix with his customary expertise in the low-grip conditions. It is, of course, a special place for both Jenson and Fernando, with all three of their World Championships being secured at this circuit. 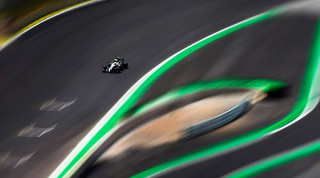