The Austrian Grand Prix manages to be both a new experience for Formula 1 and also one of the sport’s most historic races. Originally held on Zeltweg Airfield in the mid-1960s, the race found a permanent home at a new circuit in nearby Spielberg for 1970. The original Österreichring was a fearsome, flowing high-speed blast, set against the beautiful backdrop of the Styrian Alps. It held the race until 1987 when safety concerns saw it dropped from the calendar for a decade, before returning with the circuit greatly reduced in scope, for 1997. The reborn race lasted for seven seasons before disappearing for another decade, to return again last year.

McLaren are the most successful team in Austrian Grand Prix history, winning the event on six occasions – the highlight of which is perhaps Niki Lauda’s triumph in 1984 – his one and only victory on home soil.

Little changed to the circuit layout between the grands prix of 2003 and 2014. The four straights ensure the throttle is wide-open for much of the lap – but the unusually small number of corners makes energy recovery via the MGU-K a tricky proposition. Like Interlagos, Spielberg, at 2,100ft is a high-altitude race track, which means in the modern era the turbo will be required to spin at higher rpm to compensate for the lower ambient air-pressure. It will, however by dwarfed in 2015 by the return of another legendary F1 venue: Mexico City’s Autódromo Hermanos Rodríguez, with an elevation of 7,500ft. 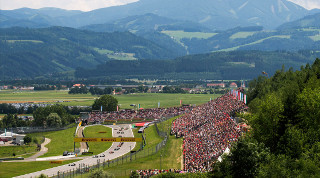