Once again Formula 1 heads to Australia to kick-start the season. Albert Park, Melbourne has been ever-present on the F1 calendar since 1996 and has proved a popular venue for the opening race, bringing in a huge and knowledgeable local crowd and, more often than not, bathing F1 in welcome sunshine after a chilly European winter.

This alone would make the Australian Grand Prix a stern challenge: with winter testing restricted to European circuits in 2015, the higher track temperatures of Australia present a very different set of tyre variables for engineers and drivers who have to quickly find a balance on Friday.

Added to that, the track itself is somewhat atypical. A street circuit, it makes use of the access roads that ring Albert Park’s central boating lake. Traditionally, the surface begins the weekend very ‘green’, leading to significant track evolution as the practice sessions and support races ‘sweep’ the racing line, improving the level of grip as the weekend progresses. Factor in the unforgiving walls, limited run-off and uneven nature of the surface, and Melbourne is anything but a gentle introduction to the new season.

McLaren has been the dominant team in the history of the Australian Grand Prix, winning the championship race on 11 occasions, six of which have come since the race moved from Adelaide to Melbourne for 1996. Jenson is a three-times Australian Grand Prix winner. He won the race on his way to the World Championship in 2009, following that with victories for McLaren in 2010 – his first in our colours – and 2012. Fernando is also a winner in Albert Park, victorious at the 2006 Australian Grand Prix. 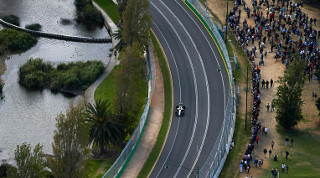