"It was messy out there"

Despite starting 12th, a brilliantly mature drive by Jenson netted him sixth position at the chequered flag.

Jenson was immediately on the move; he tangled with Sergio Perez at Mirabeau on the opening lap, but was able to continue, then moved into the top 10 following Sebastian Vettel’s retirement. He went ninth when Daniil Kvyat also retired, and timed his pitstop to perfection, switching from Primes to Options just as the Safety Car boards went out at the pit entry.

Nonetheless, he was still jumped by Nico Hulkenberg’s Force India, to run ninth. He slowly made places (running eighth after Jean-Eric Vergne took his drive-through, then seventh following Felipe Massa’s late pitstop) and then capitalised on a late-race problem for Kevin to secure sixth at the flag.

Kevin jumped to seventh at the start by brilliantly driving around the outside of Daniil Kvyat at Ste Devote and was elevated to sixth when Vettel retired.

During the flurry of stops that followed the second Safety Car period of the race, he switched to Options at his stop. However, traffic in the pitlane delayed his release, and he was jumped by Jean-Eric Vergne. Kev jumped Vergne at the end of the Safety Car period, but made the move before it was permissible, and was required by the team to cede the place back. As he was doing this, he was also passed by Hulkenberg, who demoted Kevin to eighth by opportunistically out-braking him at the inside of the second Portier.

Thereafter, Kevin trailed Hulkenberg, closing the German down in the closing laps as his Option tyres began to fade. He was less than a second behind when he encountered a problem with his power-unit, which toppled him down the order. On lap 73, he tangled with Kimi Raikkonen, as the Finn tried unsuccessfully to slice down the inside at the hairpin. Both ended up lodged in the barriers, forcing Kevin to reverse back onto the track. He eventually finished 10th.

"This was a typical Monaco Grand Prix – it was messy out there; people were making mistakes; there were cars all over the place; you had to stay focused; keep up with the pack, and look after the tyres, using them when necessary.

"For the entirety of my final stint, I looked after my tyres and dropped back into the clear air behind Kevin. Then it was just about pacing myself to the end. I couldn’t quite get past Nico [Hulkenberg] at the end – he was struggling with his tyres, but whenever I pushed, I struggled as well, so I couldn’t make it stick.

"In the closing laps, we had a good little battle, but it’s so tough when you’re shoved up behind another car. It’s difficult enough as it is, but when you can’t really see anything because there’s a car in front, it’s even more difficult.

"This wasn’t a bad result for us – I just wish I could have picked off Nico at the end. It’s just a pity that Kevin’s late-race problem meant we couldn’t get more points for both cars at the finish."

"Despite a lot of things going against us today – the long hold due to traffic at my pitstop, the unsafe release in front of me in the pitlane, and the engine issue – I can draw a lot from the fact that our car felt really good. That’s a real positive: it might be hard to see from the outside, but things are moving forward within the team.

"There were lots of little issues – Jean-Eric’s team probably didn’t calculate his release properly – it’s never the driver’s fault – it’s just one of those things that happens. And it was a pity I didn’t get to finish the battle with Nico [Hulkenberg]; I’d been saving my tyres in the expectation that Nico would struggle, but then I had a problem with my power-unit, which dropped me back.

"I’m still not really sure what happened with my car at the end of the race. And I didn’t see what happened with Kimi – I went to the inside to block his entry into the hairpin, but he chose to make a move anyway. It’s hard to overtake here, but he tried and it didn’t work. That’s racing."

"Sixth and 10th isn’t where we want to be, but we have to be realistic and acknowledge that this was a good performance – both from the perspective of the team, who worked brilliantly together, and also from both drivers, who drove tenaciously all weekend.

"Finishing 10th will be tough for Kevin to accept – he looked set for at least sixth place until the closing laps, when a problem with his power-unit dropped him down the order in quick succession. Fortunately, we were able to rectify the problem so he could proceed, but the incident with Kimi obviously didn’t help.

"As usual, Jenson showed all his customary flair and experience to relentlessly move up the order from 12th on the grid. He was always well positioned to benefit from the incidents and action ahead of him, and judged the second Safety Car [to recover Adrian Sutil’s damaged car] to perfection, choosing to dive into the pits at exactly the right time.

"Finally, I just want to pass on my congratulations to Jules Bianchi, John Booth, Graeme Lowdon and everybody at the Marussia team for scoring their very first world championship points today. Jules drove fantastically all weekend, and ninth place was a fantastic reward – not only for Jules’ charging drive, but also for the team’s efforts all season to improve and develop their car.

"They’re a fantastic bunch of guys, and they really deserve this today." 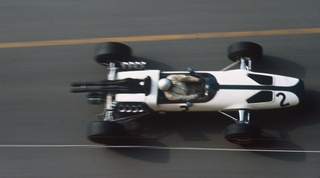