The Malaysian Grand Prix at the magnificent Sepang circuit provides one of the most fearsome tests of both driver and machinery on the Formula One calendar.

The Hermann Tilke-designed track is famed for its two vast straights, separated by the heavy braking multi-line hairpin – but Sepang has much more to offer than these  flat-out blasts. It takes a great all-round car to win in Malaysia. The combination of sweeping middle-sector high-speed turns and critical low-speed entries onto the straights demand a very finely judged setup, while the abrasive surface and sapping heat make the race a difficult one in which to manage tyres

The climate is equally demanding of drivers and crews with high humidity and temperatures frequently above 40°C. Then there’s the possibly – frequently a probability – of a sudden tropical downpour lashing the track for any length of time from seconds to hours.

Jenson Button is the most experienced driver in Malaysian Grand Prix history and has a victory and three other podium finishes to his name – but it’s also been a happy circuit for drivers new to McLaren with both Kimi Räikkönen and Fernando Alonso taking their first McLaren victories at Sepang. 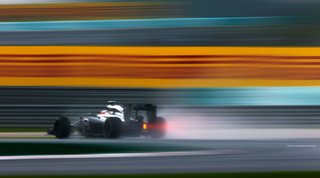